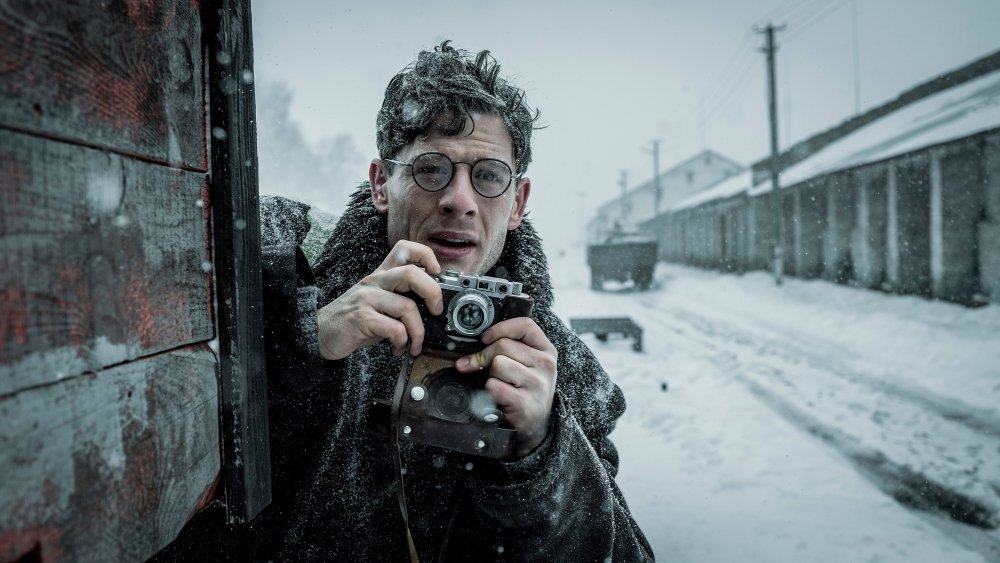 Agnieszka Holland’s epic about discovering the truth about life in the Soviet Union of the 1930s is a film with a message: that crimes of historical enormity must always be revealed, told and retold. So far, so regular. But the film itself embodies its own message. Its flaws are the flaws of all biopics, its virtues are precisely those of a story in danger of being forgotten unless a big sweeping drama can remind us of what happened, that the Holodomor famine killed millions of Ukrainians while Stalin and his purveyors of fake news – including Western apparatchiks – pretended his five-year plan of forced collectivisation was a huge success.

The feeling of faint dread one gets whenever an earnest costume drama comes along is engendered early here, particularly when we realise the framing device is George Orwell writing Animal Farm (Joseph Mawle playing him nervy and uncertain), and that we have as our main protagonist an earnest young wannabe journalist, Gareth Jones (James Norton makes him an eager and indomitable truth seeker without being showy). But the film proves much more rewarding than this opening intimates.

Kicked out of a job working as an international advisor for Lloyd George (Kenneth Cranham), the Russian-speaking Jones goes off to Moscow seeking an answer to the question: how does Stalin do it – how is the Soviet economy apparently doing so well? The prim and ascetic Jones is soon gathered under the sway of Pulitzer Prize-winning New York Times Russian Bureau editor Walter Duranty (Peter Sarsgaard in full sleaze mode), whose decadent parties are not to our Welshman’s taste and are depicted laced with jazz, smack and swaying naked vamps as we have seen in many dramas before. Jones’s romantic interests are better captured by Ada Brooks (Vanessa Kirby), one of Duranty’s more conscientious writers, whose lover, Jones’s friend, has just been conveniently murdered.

Using an altered letter of recommendation from Lloyd George, Jones swings an official trip to the Ukraine by train, but gets his minder drunk and switches trains to a local line where he finds all the passengers are emaciated. This begins the film’s real core, an austere depiction of human misery of considerable scope and power, and which by contrast makes better sense of the more stereotypical opium-dream Moscow scenes. Jones wanders a devastated country littered with frozen corpses and finds every necessary survival practice at work, even the most taboo. What then happens to Jones, as he tries to get the truth out, is a tad procedural and even more melodramatic but the urgent power of what we see helps one to ignore the mechanism.

Only someone as experienced and cine-literate as Holland could have pulled off such a extensively detailed film, one that deftly tells us so much about the context of a largely true-life story while using genre conventions of Soviet propaganda against itself. It’s also a cinephile’s storehouse of nods to Soviet classics as well as films like Three Colours: Red, Citizen Kane and Diamonds of the Night. Even the Animal Farm frame proves more resonant that I expected. Not outstanding by any means but a gripping film that needs to be seen.