Warland of hypnosis and knowledge: Ukraine in the mirror

“Divided in mind” as well as in identity, Ukrainians get to see themselves on screen at their DocuDays film festival, which has valiantly nurtured a media-savvy audience over the past 14 years. This year, of course, provided plenty to open eyes and minds… 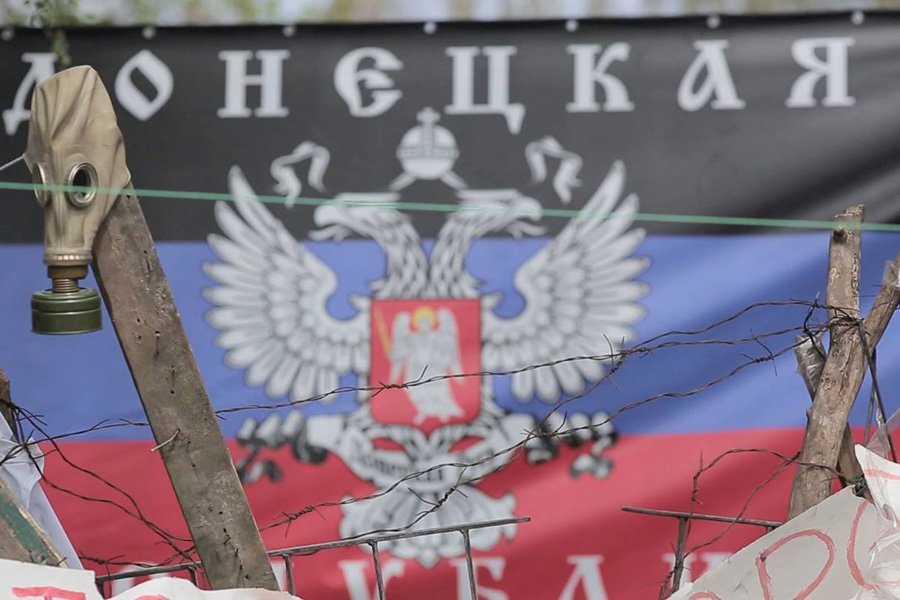 “Any understanding of social and cultural change is impossible without a knowledge of the way media work as environments.”

I’m strolling through the centre of a sunny Kiev in Ukraine for the second day, when Marshall McLuhan’s words start to echo and resonate in my head. The less than exciting name ‘Docudays International Human Rights Film Festival’ strikes a more commonplace note than the experience and atmosphere of the festival itself.

The pulse of Kiev is defined not only by the uprising two years ago known as Euromaidan or Maidan and the subsequent reverberations caused by that seismic event, but also by the ongoing military conflict in the eastern Donbas region. That confrontation, which has claimed thousands of lives, between the Eastern Ukrainian separatists supported by the Russian army and the Ukrainian army, with allied paramilitary civilian soldiers fighting alongside it, is on hold in a ceasefire – as if in homage to cinematic art – ready to flare up at any moment. The war is reflected on screen here at the festival, where the value of films is gauged sometimes through emotional knowledge, sometimes through information, sometimes through art.

Stress, concern and open enthusiasm, all of these modes are in contention.

“There is absolutely no inevitability as long as there is a willingness to contemplate what is happening.”

So much for McLuhan, but this is what’s at stake: a situation that forces one to ponder and structure one’s relationship to one’s surroundings and ask where next. Not to mention the documentary film festival which seems to work like a magic show.

One can acknowledge a difficult question without being able to provide an immediately satisfactory answer to it. Docudays seems to be a concerted effort to address this, whilst defending a more open Ukraine and urging a measured consideration of the media environment.

Artistic director Roman Bondarchuk, whose documentary Ukrainian Sheriffs was recently awarded the jury prize at IDFA, has done a magnificent job in creating the visual backdrop for the festival with a combination of satire, playfulness and pictorial rebuses that connects comprehensively with national memory. The festival trailer’s ‘chief mascot’ is a genuine slice of televisual history dating 25 years back to the collapse of the Soviet Union. This grey-haired sage used to appear on TV three times a week for an hour, asking viewers to find all the water, hand ointments, food and other bodily consumed products they could get their hands on and line them up in front of the screen. During an intense and hypnotic session, he supposedly charged these liquids, fats and foodstuffs with positive energy. “People had to believe in something,” says Bondarchuk. “No one ever questioned him during my childhood.”

Today this figure is a source of amusement, although not for everyone. In the handsome traditional Soviet-era Cinema House in Kiev works a cleaner who, according to Bondarchuk, could not understand why the fellow was being mocked, as he had “demonstrably cured my leg”.

Bondarchuk also points out that over its 14-year history Docudays has educated a whole new audience, which as of the early the 2000s didn’t understand documentary film as a genre. Today the festival has over 100 regional partners which screen documentaries in Ukraine the year round, with venues stretching all the way to the Crimea.

The opening film, Russian master Vitaly Mansky’s North Korea epic Under the Sun, serves as a suitable introduction to the laughter and tears that the festival will inspire in abundance. As well as human-rights violations by states, the films also cover more intimate, familial abuse of power, from patriarchy to narcissism. Without laughter all this would probably be hard to take. Although not for a second dull, Mansky’s film nonetheless pushes its audience to the limits of exhaustion. Next evening offers a bar screening of Benedikt Erlingsson’s circus collage The Show of Shows. 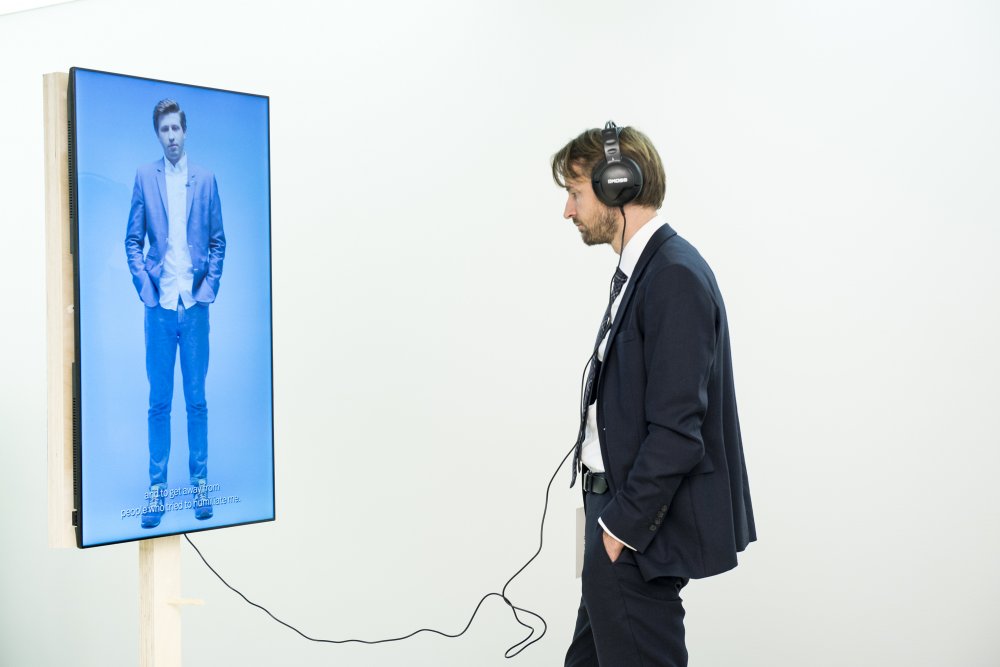 This year’s programming at Docudays under the rubric of Beyond Illusions is considered and skilful in terms of undoing mental knots and gnawing at the nerve-endings of the audience. Other entanglements are more tightly wound: Ukraine’s Swedish ambassador Andreas von Beckerath, whose country is the main financial backer of the festival, hints at the persecution of minorities such as migrants and LGBT communities in his public address. The arts centre of culturally progressive oligarch Victor Pinchuk presents video artist Carlos Motta’s queer community study Patriots, Citizens, Lovers…, which seen through Western eyes seems almost hackneyed, although it upon closer inspection extracts a painful story from the life of 11 contemporary Ukrainian witnesses. It showed outside the festival programme, whose local emphasis was largely on the revolution and ongoing war in the East.

“How do I shoot a film in this?” asks the Ukrainian documentarian Alisa Kovalenko as she pulls on a bulletproof vest in her eponymous film Alisa in Warland, by some distance the most talked-about phenomenon of the week. The film, which is credited as a co-direction between Kovalenko and Lubov Durakova, is an astonishing and somewhat schizophrenic mixture of subjective video diary, objective character study, innocent love story and biased fighting spirit. The story transports Alisa from the maelstrom of revolution to her endeavours to document the movements of separatist forces. She is captured and humiliated, and while traumatised seeks safety and meaning among the troops defending Ukraine in the East, amongst them the nationalistic Right Sector forces. Soon director Alisa is brandishing a machine gun. Is this a performance? A flirtation with the soldiers? Or what can we make of this spectacle? At the same time she communicates via Skype with her French boyfriend, who does not seem to understand her actions. 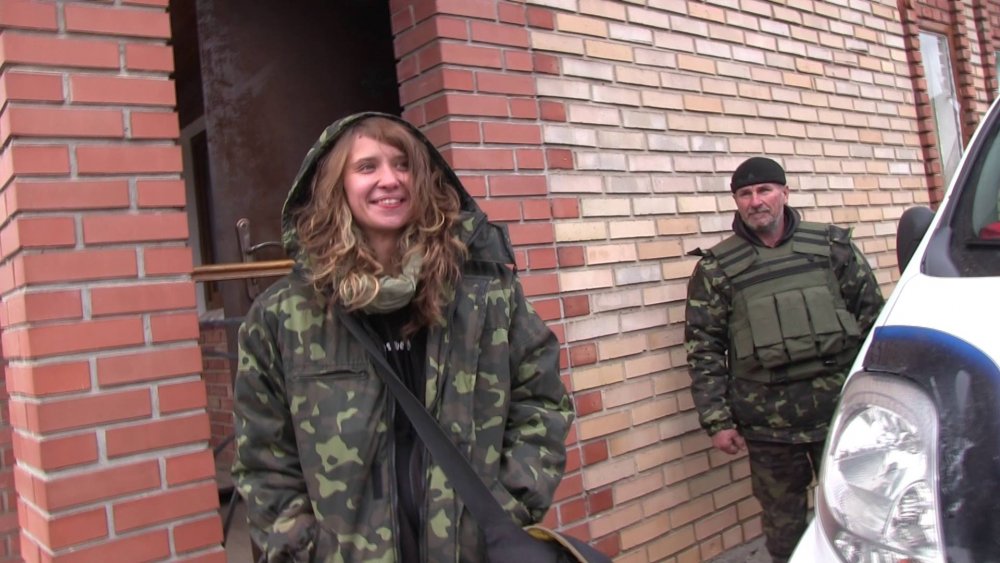 Alisa is a combination of passion and insecurity, fighting spirit and vulnerability, curiosity and ignorance – an engaging character whose innocence and femininity the film emphasises amidst a masculine war. The world around her is full of life and black humour, however much it is caught up in the thick of war. The lads of the Right Sector seem, from her point of view, paternal, playful, laid-back and fun – until someone is once again shot. You would need a Fellini to conjure up a comparably multifaceted Absurdistan so brimful of vigour and sorrow.

One German journalist suffers a professional fit induced by Kovalenko’s movie. The majority of the local audience seems to take the film to heart, however. The bravery of the main protagonist is justified by mythology. One elder gentleman remarks after the screening to the director that the European boyfriend was unable to comprehend her “Cossack-warrior mentality”. Many cried. I myself was also greatly moved by this skilfully structured film and only began to ponder what I had seen in retrospect.

A pensive profile of Alexander Dovzhenko hangs on the walls of the Cinema House. His documentary Ukraine in Flames (1943) returns to mind as a depiction of a state of emergency. The war songs sung in Dovzhenko’s film have been replaced by new ones. Only the backbeat has changed. 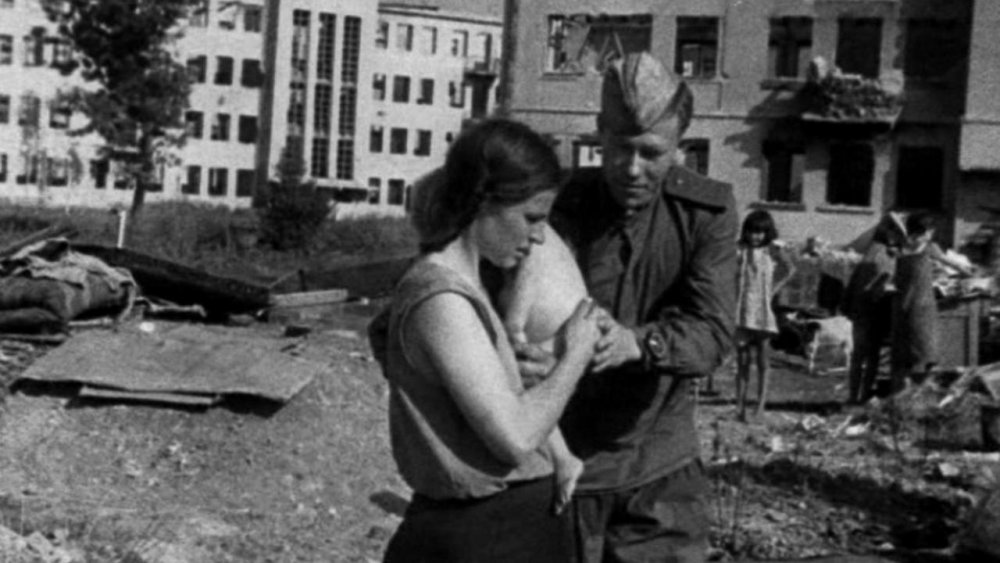 For the first time there is an exclusively Ukrainian series in the short film programme. The cinematic quality of the films is variable, but the experience of their inner reality is something entirely removed from anything the Western media could ever convey. The aesthetic and structural problems of the films form a tangent to their emotional drift: the pain and its cause cannot easily be located in the same framework.

Oleksiy Radynski’s short film People Who Came to Power unusually depicts the sentiments of the Russian loyalist fighters in the Donbas region and concludes that Ukraine is “divided in mind”. Likewise, other directors structure their world through knowledge and learning, while others opt for feeling and instinct.

Previously in Sight & Sound the Celluloid Liberation Front criticised well-known feature documentaries such as Sergei Loznitsa’s Maidan for not depicting the movements of nationalist and neo-fascist groups during events at the revolution square. “What a stupid Russian article,” is one Eastern European response to this viewpoint. Information warfare is an inextricable part of cinematic conversation at Docudays. In the EU media one is constantly being reminded of the ultranationalist Svoboda party to the exclusion of almost everything else. All Things Ablaze (2014), which has received less attention than both Loznitsa’s film and the Oscar candidate Winter on Fire, follows the fringe elements of Maidan to a tragicomic extent. In the film, angry young men yell racist and homophobic comments while tossing Molotov cocktails and inadvertently setting fire to themselves. 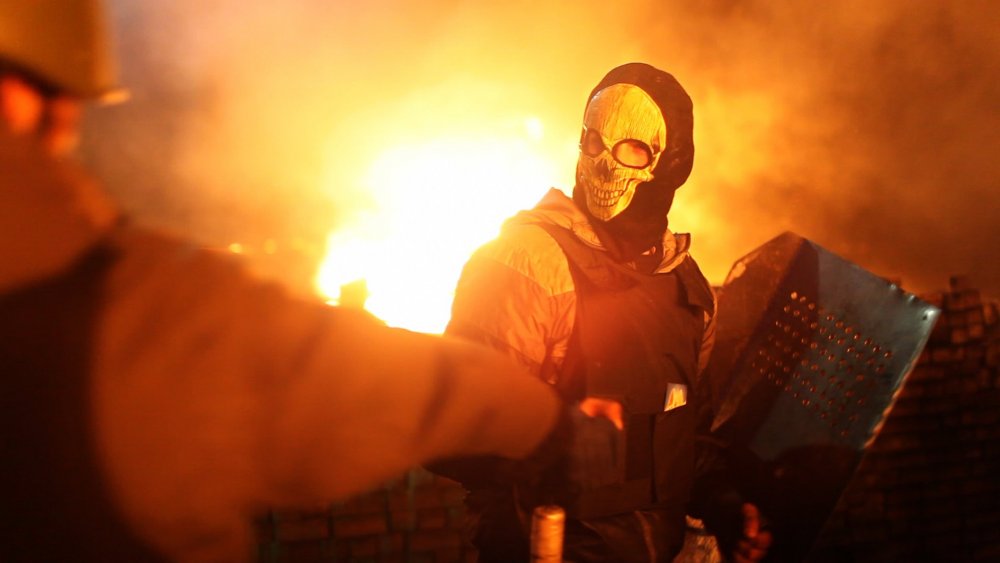 “Maidan was the most impressive moment in my life,” says Bondarchuk. “Before, the national anthem was just a boring poem you knew from school. In Maidan you saw the practical application for this thing. You need the flag for recognition. For me it’s secondary if there were some extreme freaks, a loud minority.”

The young festival organisers work in a multimedia and artistic system. Their viewpoints may differ but the event carries its weight and emerges as well-organised, constantly engaging and ambivalent.

An American point of view is provided by Steve Hoover’s frenetically edited Almost Holy, which with its breakneck transitions and low frequency soundtrack is like a Tony Scott version of a real-life hero who wields his own form of justice in his defence of street children with substance-abuse problems. Depending on your vantage point this is either skilful and explosive, or simply tasteless. 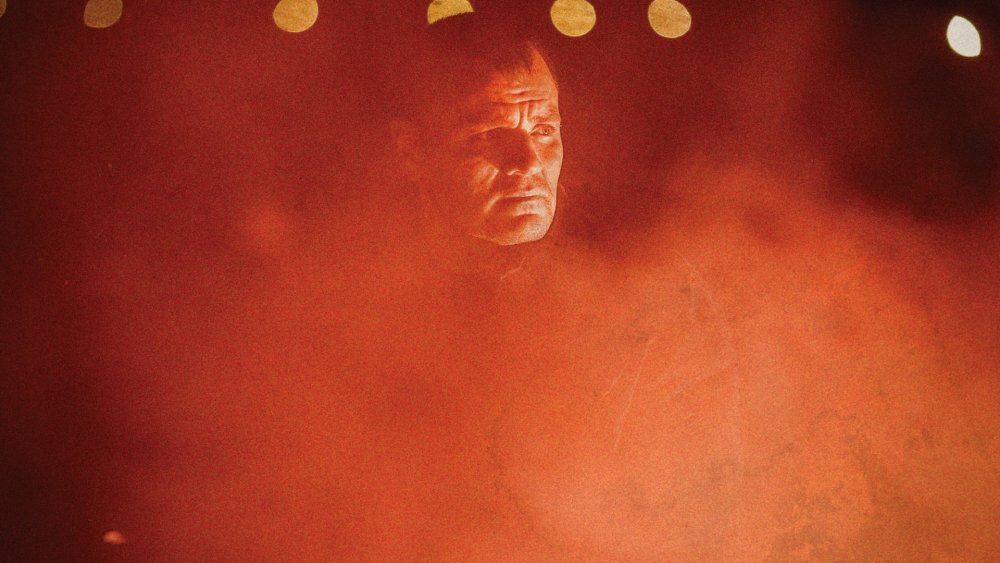 Wojchiech Staron’s Brothers, Mauro Herce’s Dead Slow Ahead, Alex Lora and Antonio Tibaldi’s Thy Father’s Chair and Viestur Kairish’s The Invisible City are only a few examples from a programme that shows a healthy respect for the skilful mastery of cinema as a medium.

The Invisible City also gains the honour of commemorating the 30th anniversary of the Chernobyl disaster. Kairish has returned to the region to film the people who still remain there. “I survived the Germans, I survived famine, so what about those nuclear reactors,” asks an 85-year-old lady of the house. “That radiation has not affected Ukraine.” 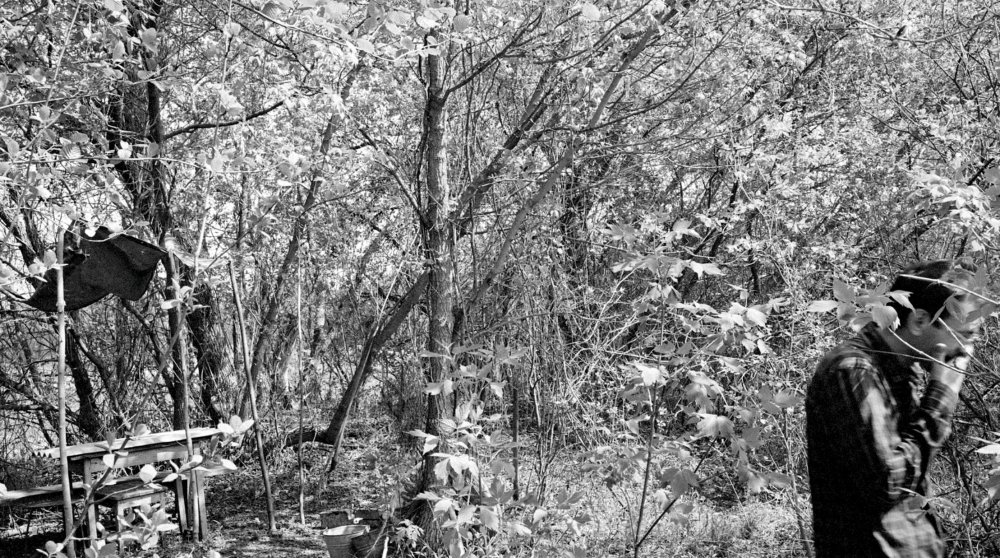 Altogether 96 films are shown. On the last day of the festival, I enter the Mysetskyi Arsenal Museum to view the massive exhibition mounted in honour of Sergei Parajanov’s film Shadows of Forgotten Ancestors (1965). Scores of cheerful children suddenly emerge into this space, following their teacher through Parajanov’s dreamlike, national landscape.

Related to Warland of hypnosis and knowledge: Ukraine in the mirror