Film of the week: Timbuktu

Abderrahmane Sissako’s film Timbuktu takes place during the occupation of that city by Islamists. The occupiers want to enforce sharia law, but to their frustration they discover that the city is populated for the most part by quietly observant Muslims, which makes their jihad quite unnecessary – a local imam (Adel Mahmoud Cherif) says as much. But, like any organisational bureaucracy, the zealous occupiers must find a reason to justify their existence, and so they start to impose arbitrary dictates on their subjects, common sense be damned.

They are awkward, these new rulers of Timbuktu, unaccustomed to exercising power and not confident enough to push their luck. One soldier fumbles through a recruitment video, blowing his lines. A motorcycle putters through town, its rider laying down the new law via megaphone: “No smoking! No listening to music! No soccer!” Eventually the bans will be shortened to include, simply, “Any old thing.”

We see Abdelkerim sneaking a smoke and trying to learn how to drive a stick shift, and he seems more a shy bumbler than a warrior of God; the occupying army appear to be a bunch of busybodies who surely must see there’s nothing to do here and move on. It is even rather funny, at first, to see the invaders quibbling with an incredulous populace trying to go about their affairs, telling worshippers at the mosque to shorten their trousers, or forcing a fishmonger to wear reeking gloves in the midday heat.

What is not immediately obvious is that this is the behaviour of the bully who has already decided to hit you and wants to see how far he can push you before you finally give him a pretext to do what he has wanted all along. The invaders are seen early on taking target shots at gazelles and pieces of looted statuary depicting unclothed females. They aren’t likely to let that practice go to waste. But still we can’t quite believe it: these men are thoroughgoing mediocrities, and something in us rebels at the idea of mediocrities being capable of anything spectacular – and acts of violence are, of course, spectacular.

And then the boom is lowered. An impromptu musical evening, shot in a sweetly drifting style, is suddenly broken up by soldiers – such casual mixing of the sexes is banned – and the female singer receives 40 lashes in a public square the next day. A local girl is forced into marriage with one of the soldiers, who first comes calling under the guise of courtship but who rather quickly lets it be known that his request will not be denied. A couple, buried to their necks in sand, are stoned to death – we see only a little, but it is enough. Kidane too will stand accused – for a real crime, as it happens. That Sissako can show that the fate of a murderer is no less unjust than that of an innocent in this anarchic environment is a testament to his moral intelligence, and his faith in his audience.

They rape and pillage, these invaders, though they don’t do so in a forthright way, as proper barbarians, but rather cloaked in the guise of righteousness. Watching the gradual shift from merely symbolic displays of power to bloodshed, the effect is something like being caught in a nightmare that you recognise as such but can’t wake from or control. Essential to Sissako’s accomplishment is his underlining of the extraordinary strangeness of these goings-on, making one think, “Surely this can’t be happening?” even though we know full well that such things happen all the time.

As has been widely noted in reviews of Timbuktu, these things do indeed happen; many have happened in the months since Sissako’s film played in competition at the 2014 Cannes festival, and will certainly continue to. But to make Sissako’s film the sum total of its ‘relevance’ is to reduce it – as a political act, it is at best a lovely but symbolic statement of resistance, like the fabulously bedecked local witch, Zabou, blockading the street from the occupying army, or the resourceful boys circumnavigating the football ban by pantomiming a match in a dusty lot without a ball. The fact remains that there are few filmmakers alive today wearing a mantle of moral authority comparable to that which Sissako has taken upon himself, and if his film has been met with an extraordinary amount of acclaim, it is because he manages to wear this mantle lightly, and has not confused drubbing an audience with messages with profundity. I can’t imagine the film having been made any other way, by anyone else – and this is one measure of greatness. 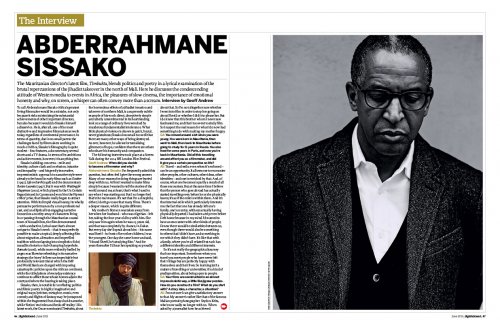 The Mauritanian director’s latest film, Timbuktu, blends politics and poetry in a lyrical examination of the brutal repercussions of the jihadist takeover in the north of Mali. Here he discusses the condescending attitude of Western media to events in Africa, the pleasures of slow cinema, the importance of emotional honesty and why, on screen, a whisper can often convey more than a scream. Interview by Geoff Andrew.

Related to Film of the week: Timbuktu