Céline Sciamma’s terrific Girlhood and the faces of the new French cinema – plus Clouds of Sils Maria and The New Girlfriend, sign-language cinema in the Ukrainian sensation The Tribe, Christian Petzold’s vertiginous postwar melodrama Phoenix and the S&S Interview with Abderrahmane Sissako. 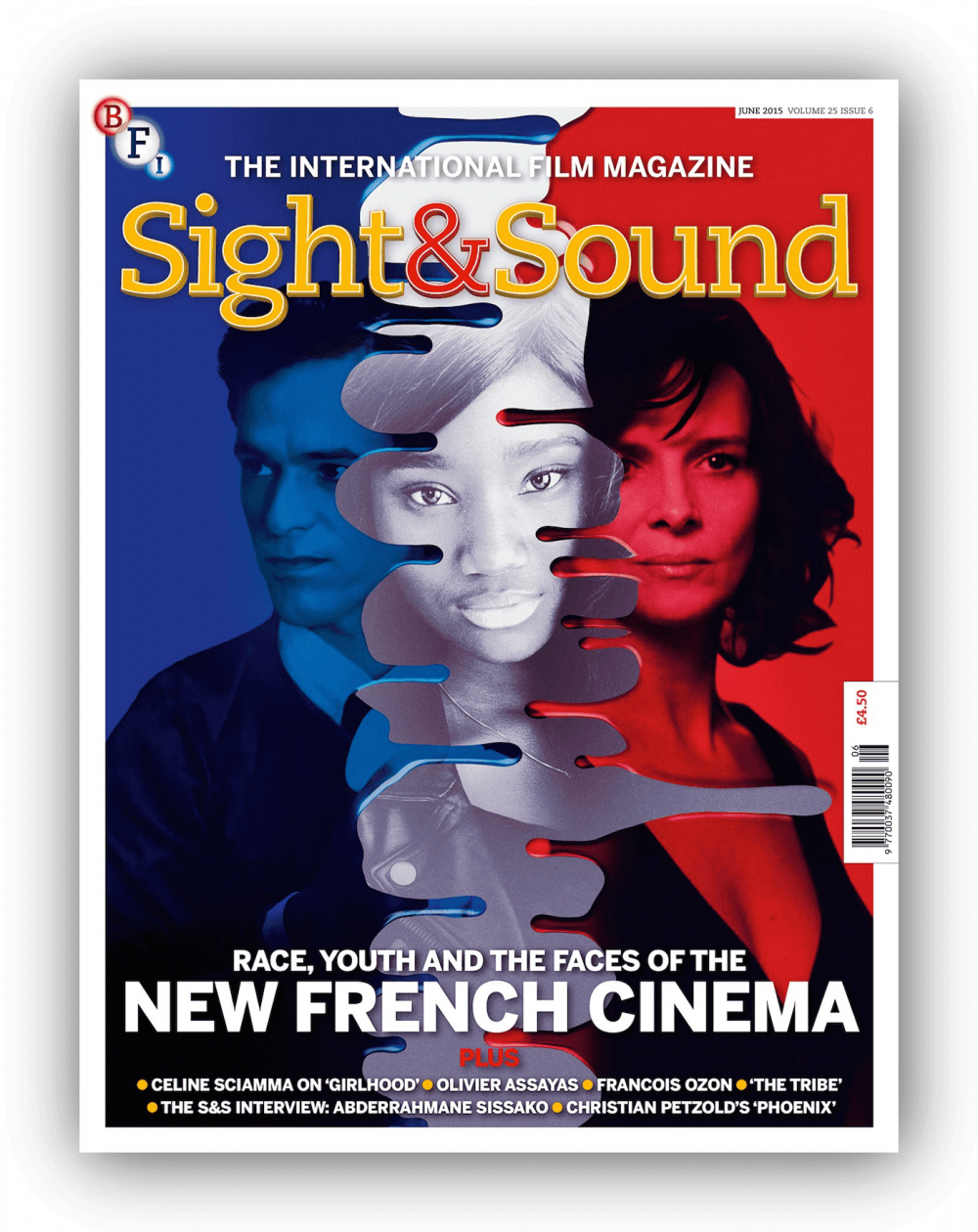 Our French Cinema Special looks at the current pre-Cannes condition of a national cinema whose worldwide influence had arguably been waning. But, as Ginette Vincendeau explains, in the 20 years since Mathieu Kassovitz’s banlieue-based film La Haine exploded onto the scene, a great deal has changed in the way French cinema engages with its multicultural population, with non-Caucasian actors now prominent all across cinema and television.

On UK newsstands 5 May

The film which best crystallises this moment is Céline Sciamma’s extraordinary Girlhood, a portrait of a young black girl’s search for identity. Disaffected by the lack of options her schooling has allowed her, Marieme (Karidja Toure) joins a gang of three other girls who want the best for themselves and makes her own progress. As Sciamma tells Thirza Wakefield, as far she is concerned, “French young women today are this girl”.

Identity and desire are also at the heart of of François Ozon’s The New Girlfriend, a film that’s hard to describe without spoilers. Suffice to say it’s an adaptation of a Ruth Rendell short story, so a thriller might be expected, although Jonathan Romney’s introduction to his interview with Ozon also promises “a teasing hybrid that merges elements of romance, farce, melodrama and even musical”. He calls it “Ozon’s most overtly Freudian film… also his most playfully subversive of the sexual codes of mainstream French cinema.”

Olivier Assayas’s Clouds of Sils Maria was written in answer to a plea from Juliette Binoche for better parts. It concerns Maria Enders (Binoche), a famous actress who’s cast as the older seduced woman in the same play that once made her name as the young seducer of that woman. As Assayas told Neil McGlone, “The one solid element was Juliette and everything was structured around her.” But it’s Maria’s curious relationship with her assistant Valentine (Kristen Stewart) that’s at the heart of this complex study of the shifting identities of age. As Assayas says, “Movies are about the alchemy between elements. What I was recording, almost in a documentary way, was what was happening between Juliette and Kristin.”

Christian Petzold has won the German Film Critics Association’s Best Fiction Feature prize more times than any other modern director, and following Yella and Barbara (both released in the UK) his reputation abroad should continue to rise with Phoenix, a psychological romantic drama in which his regular leading lady Nina Hoss plays a concentration-camp survivor who returns home to Berlin after reconstructive facial surgery to start life anew. Petzold talks to Neil Young about trauma, shame, vacuum and all the things Germany ceded to America before and after the war, from the film talents who forged film noir to its own modes of culture and capitalism.

Myroslav Slaboshpytskiy’s The Tribe is no ordinary silent-movie homage – rather, following a group of pupils at a deaf school in Ukraine whose use of Russian Sign Language is the film’s default language (along with a richly textured sound design), it’s what Jonathan Romney calls “an audacious work – hardcore in its formal invention and in its readiness to follow its subject matter to extremes of poetry and violence.” Romney parses the resonances of a film that upends the usual privileges of hearing-ability in cinema, while Slaboshpytskiy talks to Isabel Stevens about work with deaf non-professional actors and presaging the spirit of Ukraine’s Euro-Maidan.

In this month’s S&S career interview, Geoff Andrew bills Mauritania’s Abderrahmane Sissako “one of the most distinctive and impressive filmmakers at work today”; across a mere handful of features and shorts, amongst them Life on Earth (1998), Waiting for Happiness (2002) and Bamako (2006), the director “is notable for conflating politics and filmic poetry in highly imaginative and original ways; lyricism, metaphor, music, even comedy and flights of fantasy may be juxtaposed within the fragmented but always lucid narrative, while ‘fiction’ ncircles and feeds off ‘reality’.” Sissako talks to Andrew about migration and exile, societies in transition, humour and his impressionistic style of filmmaking.

Elsewhere in the issue we look forward to this month’s Cannes, Laura Mulvey revisits the ‘male gaze’ 40 years on, Debbie Tucker Green talks about her switch from stage to screen, Hannah McGill considers the semiotics of tennis in the movies, Mark Cousins talks visual language and lighting, Jasper Sharp listens to Dolby Atmos, our Soundings column talks to the Black Audio Film Collective’s Trevor Mathison, our Wide Angle section runs the gamut from Orkney’s Margaret Tait to Harlem’s Khalik Allah, our Reviews highlights A Girl Walks Home Alone at Night and Listen Up Philip, our Home Cinema section reviews Tsai Ming-Liang’s two latest and rereleased classics from Jean Renoir and Carl Dreyer, and our Books section takes you from The Dawn of Technicolor to P. Adams Sitney’s latest tome of avant-garde insights. 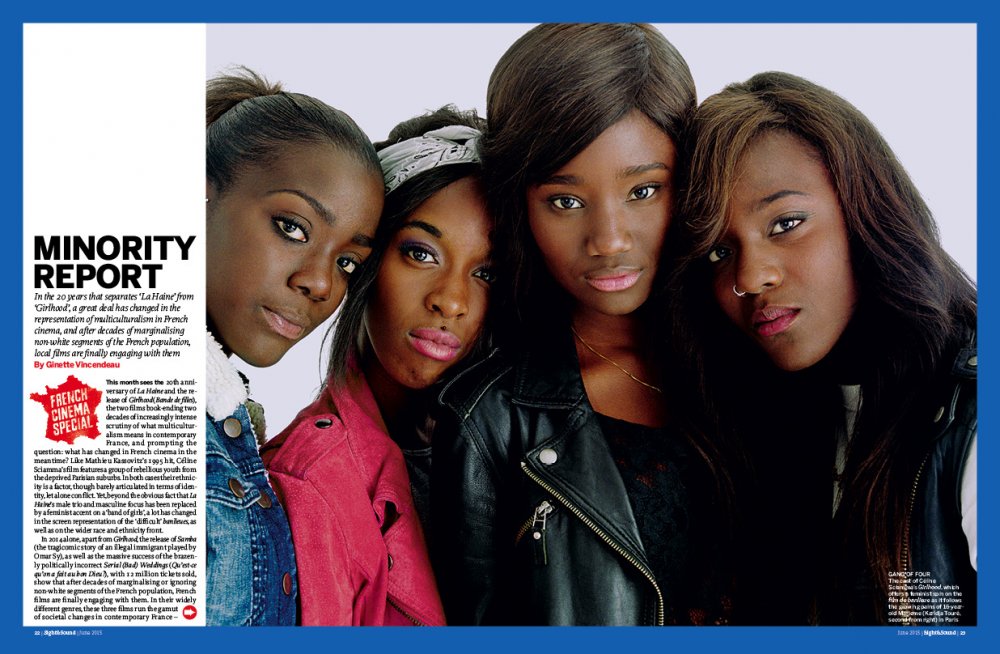 In the 20 years that separates La Haine from Girlhood, a great deal has changed in the representation of multiculturalism in French cinema, and after decades of marginalising non-white segments of the French population, local ﬁlms are ﬁnally engaging with them. By Ginette Vincendeau.

Plus: Girls in the hood

Céline Sciamma’s Girlhood paints a complex portrait of a young black teenager in the banlieues, part of the director’s filmic project to portray the multiplicity of what it is to be female. By Thirza Wakefield. 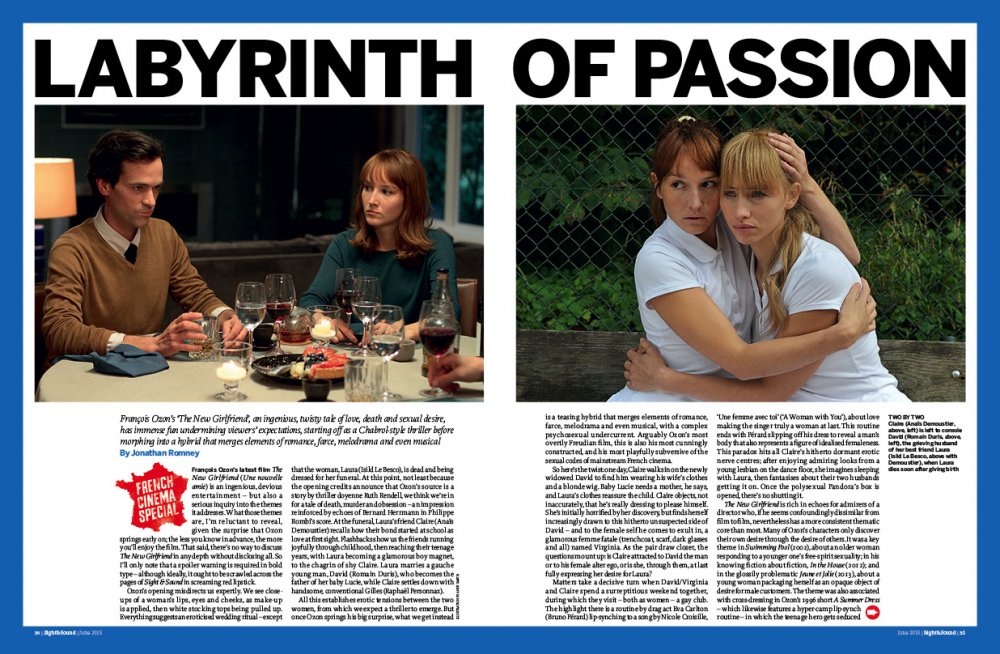 François Ozon’s The New Girlfriend, an ingenious, twisty tale of love, death and sexual desire, has immense fun undermining viewers’ expectations, starting off as a Chabrol-style thriller before morphing into a hybrid that merges elements of romance, farce, melodrama and even musical. By Jonathan Romney. 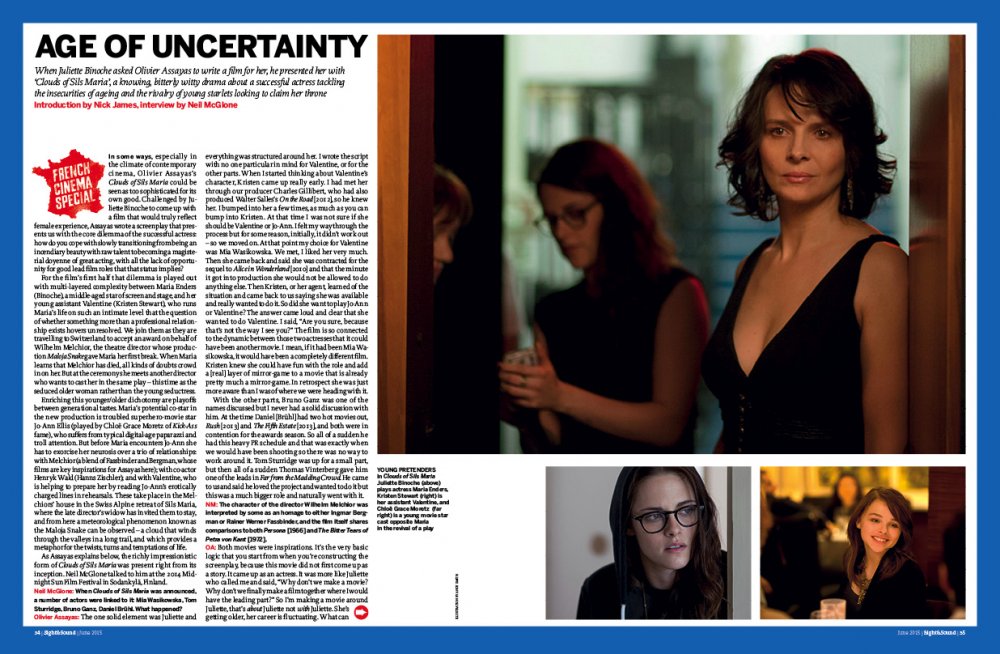 When Juliette Binoche asked Olivier Assayas to write a film for her, he presented her with Clouds of Sils Maria, a knowing, bitterly witty drama about a successful actress tackling the insecurities of ageing and the rivalry of young starlets looking to claim her throne. Introduction by Nick James, interview by Neil McGlone. 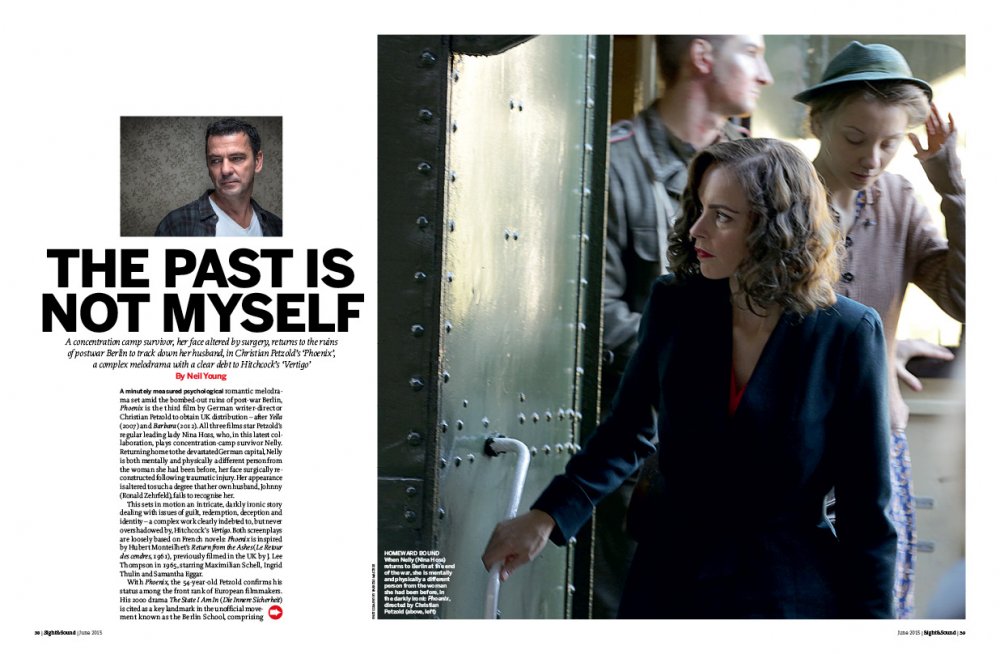 A concentration camp survivor, her face altered by surgery, returns to the ruins of postwar Berlin to track down her husband, in Christian Petzold’s Phoenix, a complex melodrama with a clear debt to Hitchcock’s Vertigo. By Neil Young. 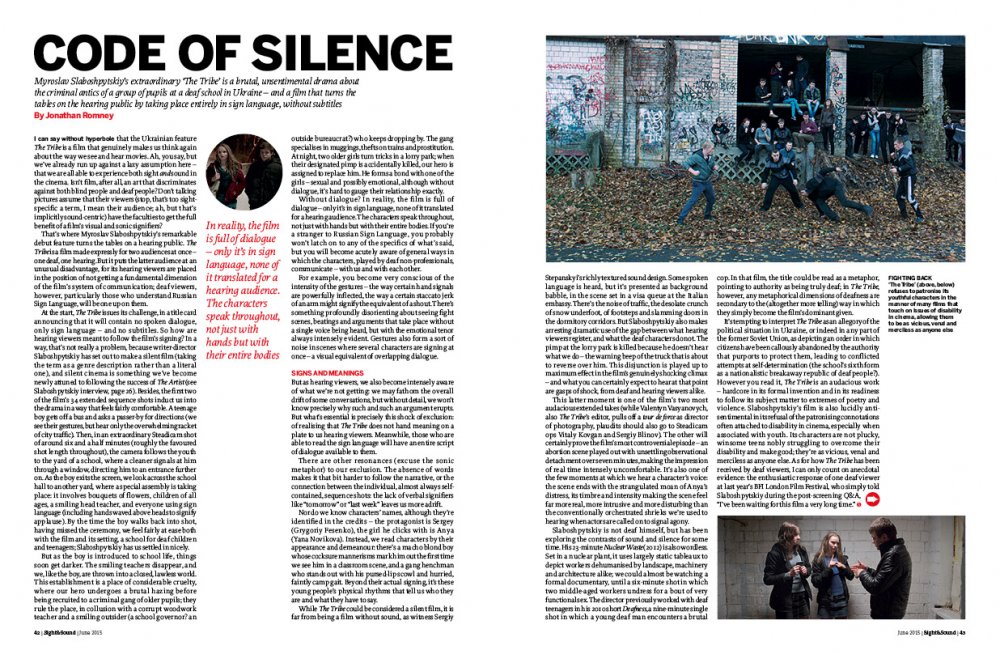 Myroslav Slaboshpytskiy’s extraordinary The Tribe is a brutal, unsentimental drama about the criminal antics of a group of pupils at a deaf school in Ukraine – and a film that turns the tables on the hearing public by taking place entirely in sign language, without subtitles. By Jonathan Romney. 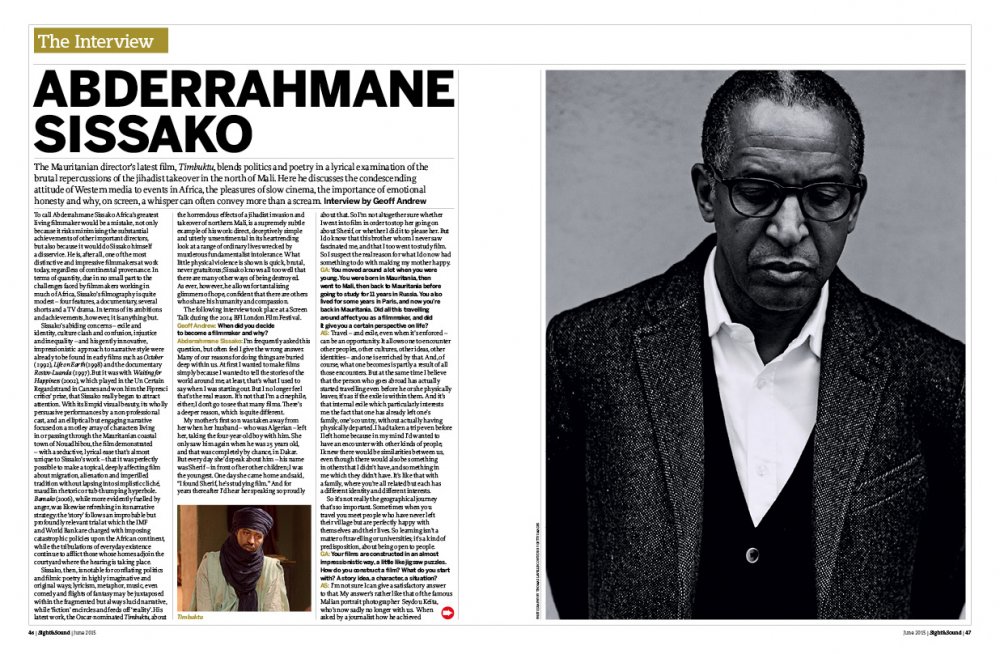 The Mauritanian director’s latest film, Timbuktu, blends politics and poetry in a lyrical examination of the brutal repercussions of the jihadist takeover in the north of Mali. Here he discusses the condescending attitude of Western media to events in Africa, the pleasures of slow cinema, the importance of emotional honesty and why, on screen, a whisper can often convey more than a scream. Interview by Geoff Andrew.

Film criticism in the digital age

In the frame: The French selection

The august regulars are still in evidence, but this year’s Cannes line-up is rather less predictable – and younger – than in recent years. By Isabel Stevens.

Class, gender, romance, violence, the nature of reality – for Hollywood, at least, tennis often has very little to do with sport. By Hannah McGill.

The five key…: Films about flight

Cinema has been flying high on the daring, romantic and murderous exploits of aviators since its early days. By Kate Stables.

However fluent you learn to be in the language of the camera, sometimes it’s worth having a native speaker to interpret. By Mark Cousins.

It took a lot of heartache to give screenwriter Tess Morris the theme for her first feature, and quite a bit more to get it on screen. By Charles Gant.

Decent British horror films are rarer than vampires in daylight. It’s almost enough to give you nightmares. By Ben Roberts.

A new generation of exhibition sound technology is helping to expand cinema’s storytelling potential beyond the screen. By Jasper Sharp. 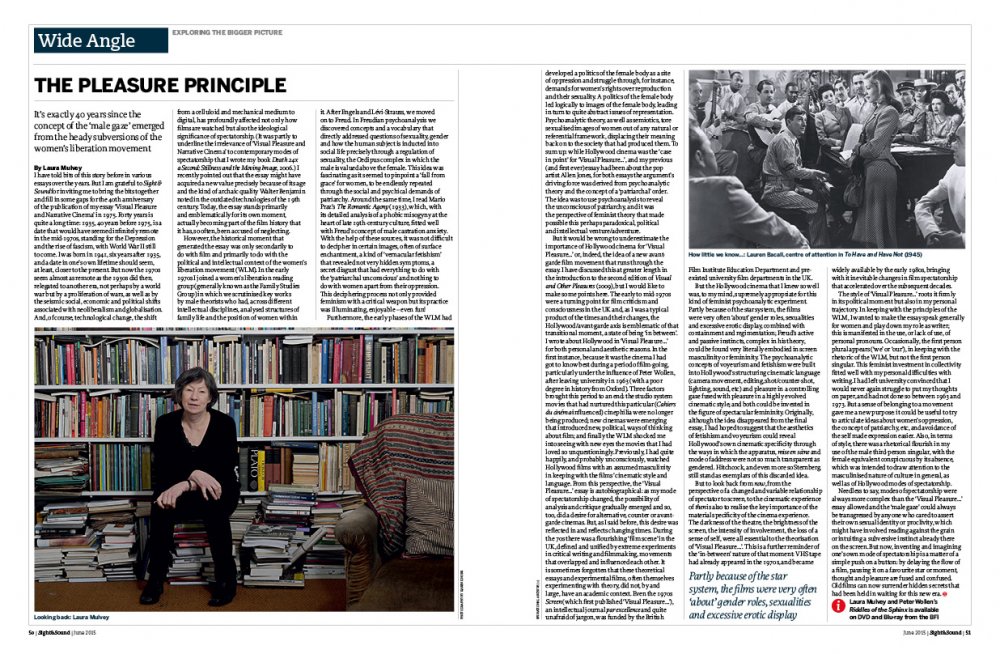 It’s exactly 40 years since the concept of the ‘male gaze’ emerged from the heady subversions of the women’s liberation movement. By Laura Mulvey.

The sound designer and composer Trevor Mathison has been creating complex, original film soundscapes for more than 30 years. By Ashley Clark.

Bo’ness’s Hippodrome Festival of Silent Cinema is offering some valuable lessons in how to bring silent films to new audiences. By Pamela Hutchinson.

The filmmaker and poet Margaret Tait was an uncompromising, singular talent and her work deserves to be more widely seen. By Nick Roddick.

New visions: Dreaming in the dark

Khalik Allah’s Field Niggas is an intense, hallucinatory vision of life among ‘the most lowly’ in night-time New York. By Sukhdev Sandhu. 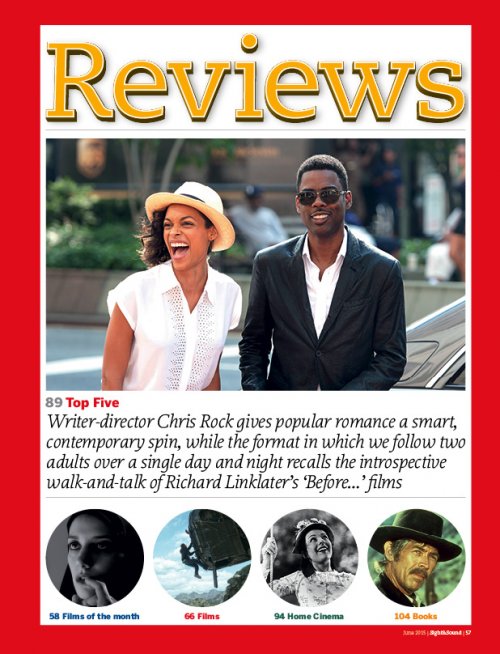 The Beat Beneath My Feet
Big Game
The Canal
Child 44
Clouds of Sils Maria
The Connection
Danny Collins
The Dead Lands
Fast & Furious 7
A Fuller Life
Futuro Beach
Get Hard
Girlhood
The Goob
Home from Home: Chronicle of a Vision
Honeytrap
Lambert & Stamp
Lost River
Man Up
The Man Who Saved the World
Moomins on the Riviera
The New Girlfriend
Paul Blart: Mall Cop 2
Phoenix
Pitch Perfect 2
Rosewater
A Royal Night Out
Spooks: The Greater Good
Spring
Still
The Supreme Price
Timbuktu
Tokyo Tribe
Top Five
The Treatment
The Tribe
We Are Monster
Woman in Gold 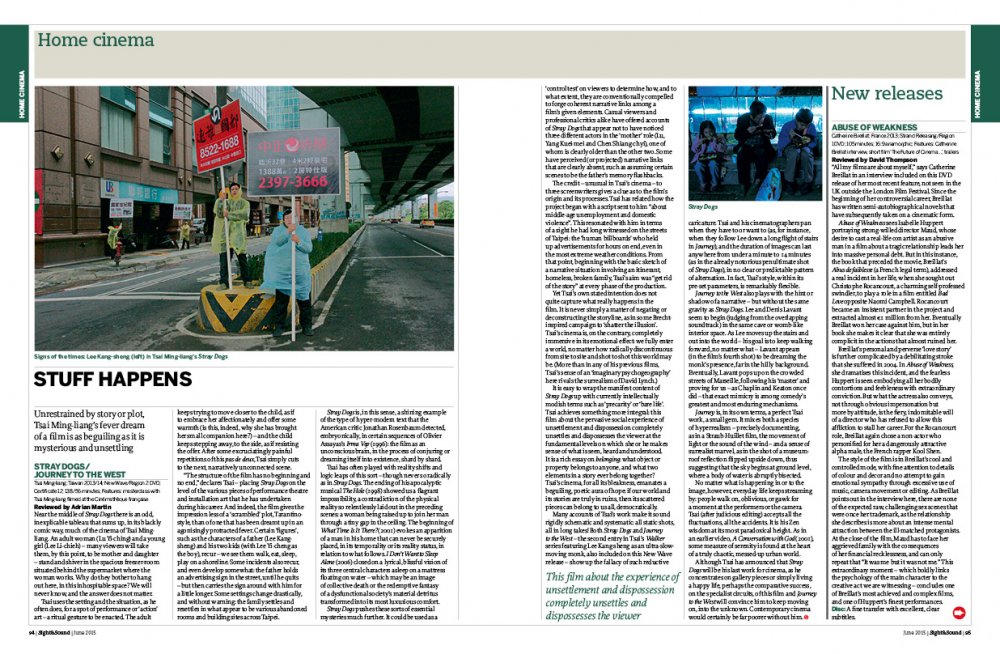 Unrestrained by story or plot, Tsai Ming-liang’s fever dream of a film is as beguiling as it is mysterious and unsettling. By Adrian Martin.

Horror and harmony are constantly juxtaposed in the domestic spaces of Dreyer’s late films. By Michael Brooke.

Renoir’s depiction of a day in the country is full of painterly beauty and lyrical landscapes… but nature here is far from benign. By Graham Fuller.

The Gone Girl of its day, this French noir shows a marriage poisoned both figuratively and literally by a husband’s cruelty. By Farram Smith Nehme. 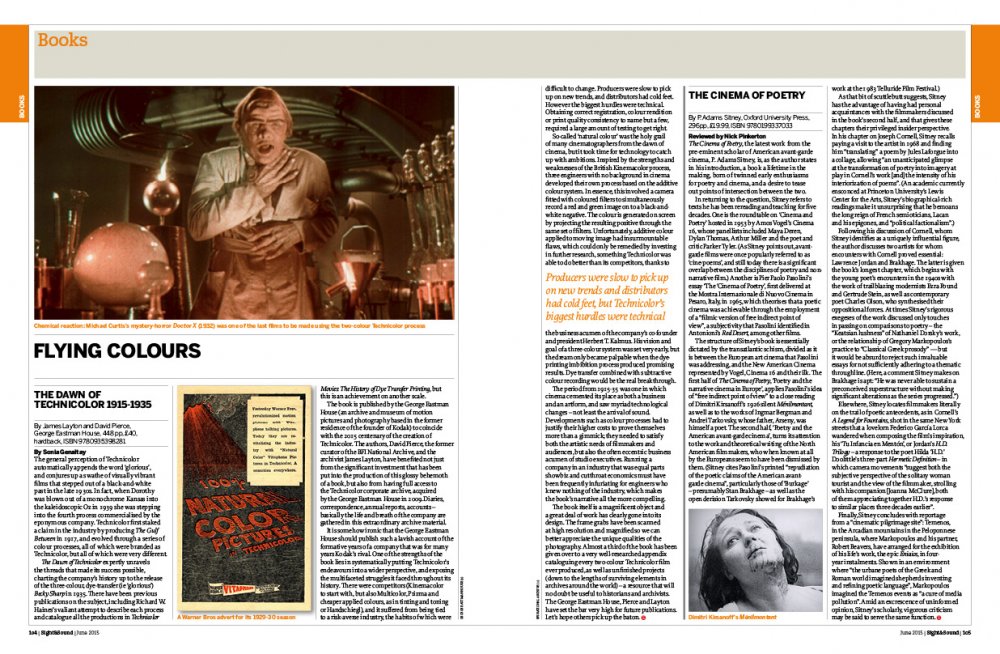 In defence of Krzysztof Zanussi
Broadening Hitchcock studies
While We’re Young, unfunny and solipsistic
The greatness of The Offence
Online migration 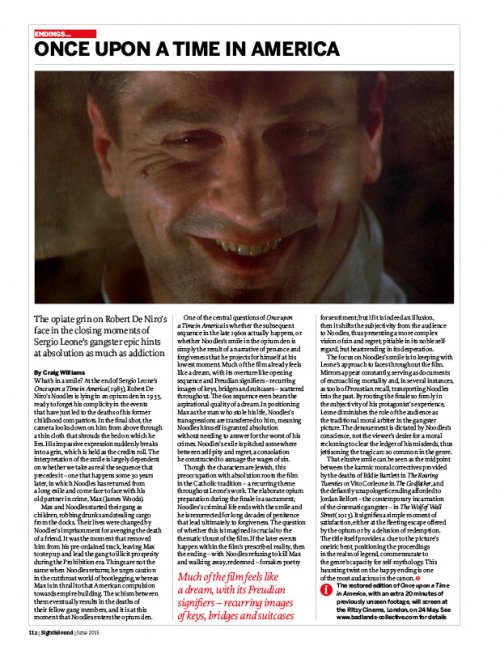 Once Upon a Time in America

The opiate grin on Robert De Niro’s face in the closing moments of Sergio Leone’s gangster epic hints at absolution as much as addiction. By Craig Williams.