Film of the week: Listen Up Philip

It’s the life of the mind, stupid: Alex Ross Perry’s spectacular contribution to the literary-monster genre runs riot with the narcissism of its unbound wordsmith – but neglects to show us his humanity. 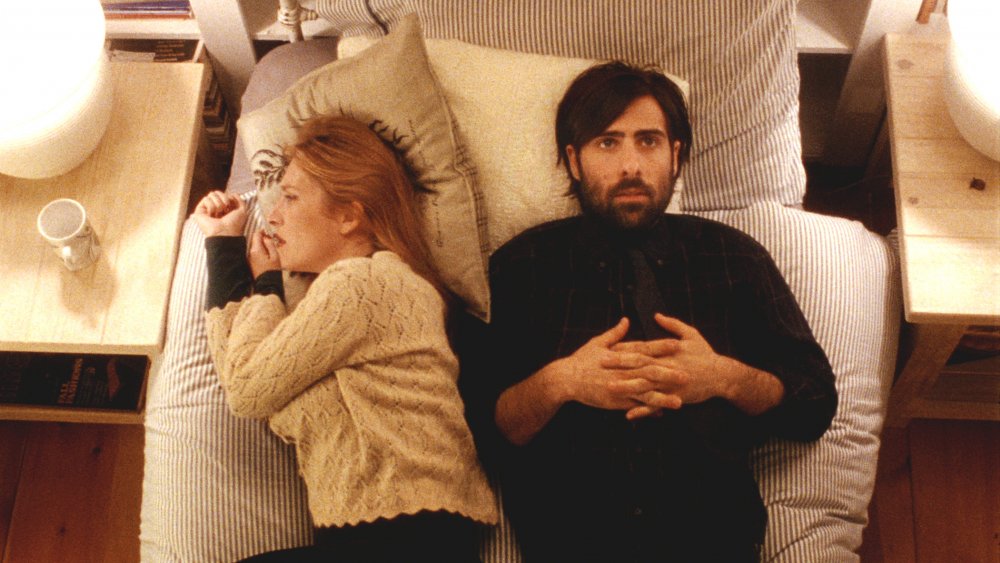 Movies about writers have always borne a vexing handicap – relative to artists, sculptors, composers or even filmmakers, whose processes we can find addictive to watch, writers do their work in the monastic privacy of their own skulls. As countless cyber-thrillers have demonstrated, there are few things more enervating than watching someone type. Luckily, our cultural tangle with writers, as individuals weaving ageless narratives or poetic legacies out of perfectly thin air, can often have the grist of very bad – or at least socially irresponsible – behaviour to contend with. As semi-public figures, writers grip our imaginations precisely because their craft commonly insists they fly against the demands that most of us have to deal with – ordinary day-swallowing wage-slavery, social modesty, public self-control, responsibility to others, self-sacrifice within relationships.

Alex Ross Perry’s Listen Up Philip grabs this dynamic with two jittery hands and limns a pocket-sized portrait of nascent literary solipsism gone almost irredeemably toxic. The film can be men-behaving-badly hilarious, because its many stone-cold embarrassments are deftly lifted from the realities of small-pond-mean-fish ambition in the increasingly lean world of contemporary literary fiction.

Devising the character of Philip Lewis Friedman (Jason Schwartzman), Perry has indexed the living legend of novelist Philip Roth, and in a particularly interesting way – imagining, in a sense, how Roth’s famously egomaniacal, womanising, bulldozing personality would fare in the 21st century, when writing slim, sophisticated, self-referential novels could no longer dependably buy you mainstream ubiquity, a nation of fans and a house in the Hamptons. 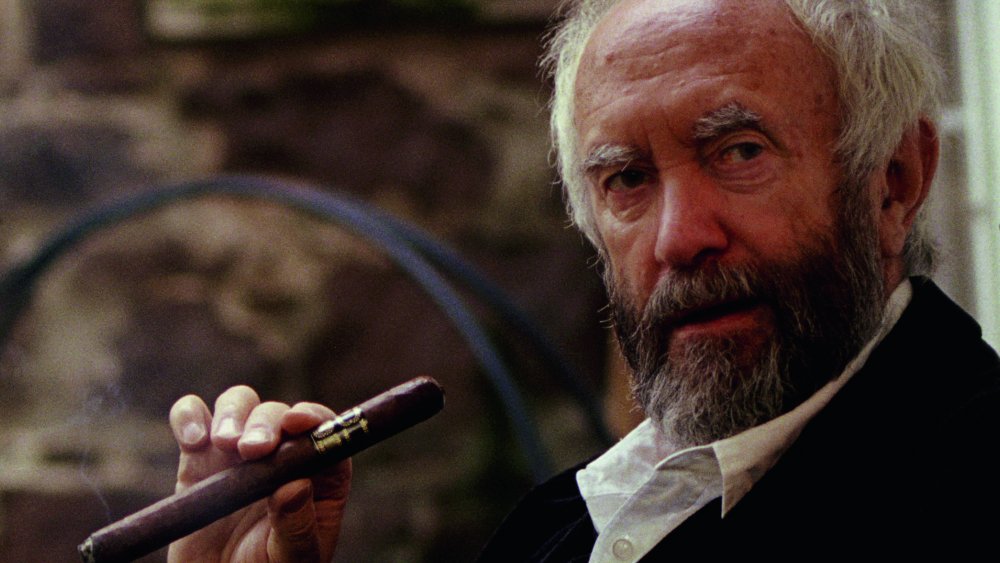 Having recently turned 30, Perry is also taking sniper aim at modern hipsterdom in its Brooklyn details, but Philip Friedman is an incendiary gag that you would suppose probably universalises all the way back to H.L. Mencken and William Faulkner. (The film’s and the character’s implicit nostalgia is for the post-war American-lit landscape embodied by Roth, Saul Bellow, Bernard Malamud, John Updike, Joseph Heller etc.)

Unblinking, machine-gun-mouthed and catastrophically self-excusing, Philip is by all indications of the story a truly talented writer – his acclaimed if underselling first novel is followed now by the release of his second, of which no one in the film utters a single word of doubt or criticism. But Philip himself is a monster, a world-beating dick. As he moves into caustic-celebration mode, expecting his new book to confirm his greatness to the world, everyone gets the quick-tongued jerk’s self-aggrandising vitriol sprayed in their face like clown seltzer, from his sweet and therefore doomed live-in girlfriend Ashley (Elisabeth Moss) to his few remaining friends (a confrontational bar meeting with an old classmate reduces the man to tears) and even his long-suffering agent (Daniel London), who balks when Philip decides whimsically that he won’t help publicise his own book and begins a meeting with Philip by telling his assistant, “Don’t hold my calls.”

Philip’s respect is reserved only for Ike Zimmerman (Jonathan Pryce), an old-guard lit giant roughly rhyming with Roth himself (his novels are wittily titled and designed as faux Roths from the apex of the paperback era), who extends a mandarin invitation to meet after being impressed by Philip’s book. It’s a rich conceit – two Philips, suggesting a prismatic view of poisonous ego plus or minus the fermentation of time. Full of malted aphorisms and grizzled advice, Pryce’s courtly king is just as narcissistic as Philip, a fact we only come to see gradually, as we are made aware of his ruinous history of marriages and fatherhood. It’s Zimmerman’s offhand offer to Philip of his upstate country house as a quiet sanctuary to write that precipitates the collapse of Philip’s relationship with Ashley and his eventual comeuppance, as a man with nothing but burnt-out bridges. 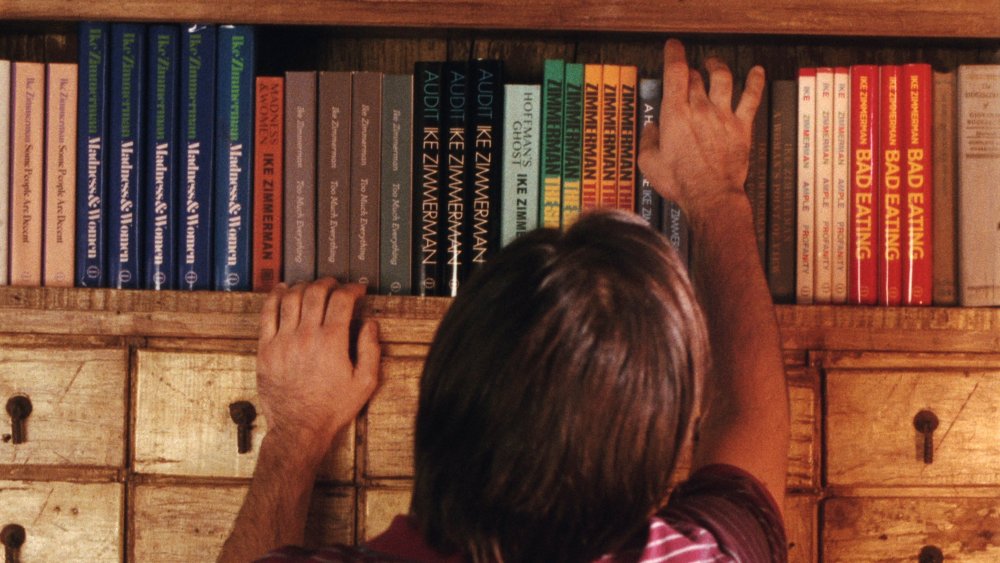 Shot with a handheld looseness that often verges on attention deficit and structured with a heavy-hand narration that could be, perhaps, the text of a Philip book-to-be, Listen Up Philip wheels free, detouring in its second half towards Ashley’s tear-stained recovery from Philip-ness, Zimmerman’s crumbling relationship with his suspicious grown daughter (Krysten Ritter) and Philip’s own unhappy attempt to earn a living as a creative-writing teacher.

This is Perry’s third feature, and his narrative strategies can be whimsical. His first film, Impolex (2009), was a tiny experiment shot entirely in the Vermont woods, in which a WWII-suited hero searched aimlessly for toy V-2 rockets, chatted with a (very real) octopus draped over a log, messed around with a handmade tarot deck and so on, in what you gradually realised was something like a microscope-slide adaptation of Thomas Pynchon’s Gravity’s Rainbow. Less reverse-grandiose, his sophomore feature The Color Wheel (2011) was reportedly inspired by Roth’s fiction, and more closely adhered to orthodox indie iconography by accompanying a bellicose brother and sister on a meandering, very verbal black-and-white road trip to lost adulthood.

The new film moves in the kilter of a mid-career Woody Allen, weaving but not quite cohering, taking leave of hate-magnet Philip only at its peril. As Ashley, Moss is warm and responsive, but her character’s reconstitution of a Philip-free life is also drama-free.

Happily stuck in a literary era from before he was born, Perry never seems starry-eyed – Listen Up Philip may be the most lucid film ever made about the modern fiction publishing industry, not that it has much competition. But I never thought I’d see a movie that’s more cynical about the American lit scene than I am. In fact, as Philip’s stone-faced dress-downs and vain exclamations pile up, the extremeness of his personality creates a real-world disconnect – it’s very difficult to parse out exactly why most of the eye-rolling characters revile him as an abhorrent asswipe, and why others, mostly women, find him adorable, or at least do not seem to understand his repugnance, à la Margaret Dumont in the Marx Brothers’ movies. Are we meant to take the film’s social whorl as nominally realistic or believable? Or does Perry have an unaddressed issue with women? In reality, after all, distasteful male egomaniacs attract women all the time – but maybe, behind closed doors, they’re not assholes 100 per cent of the time, as Philip is. 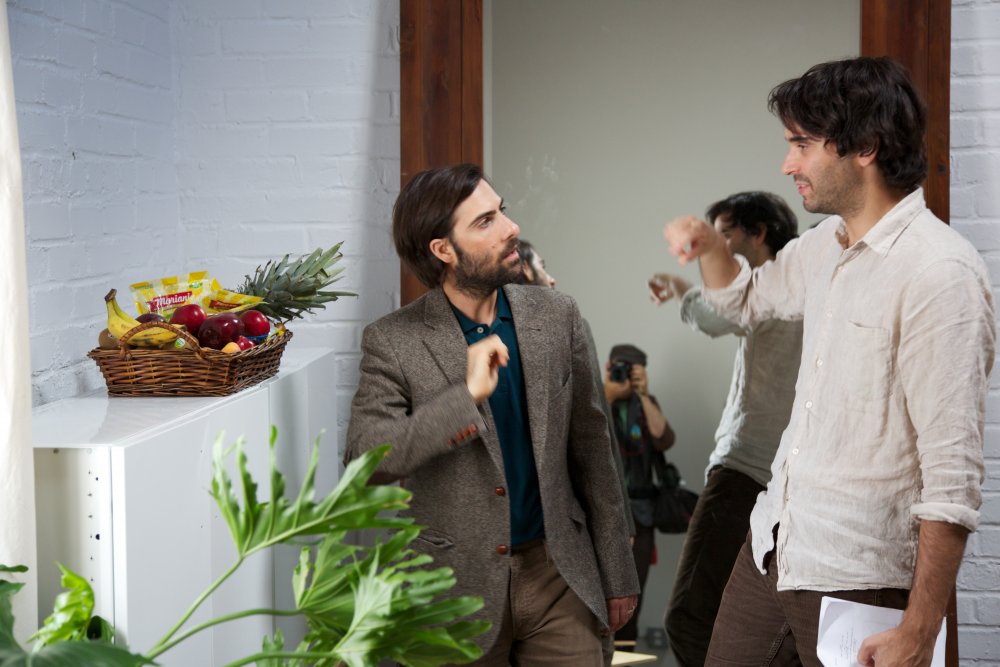 The disconnect may be built in: Philip himself lacks even a child’s acumen on how to dress up his narcissism for company, and Perry is applying a cold eye and a broad brush to the inherent and necessary selfishness required for novelists to prioritise their imaginary narratives. Which reveals another, almost inevitable vacuum in Perry’s admittedly modest film – outside of the reams of talk about writing and its demands, there’s no access to the writing itself, Philip’s or Zimmerman’s or anyone’s. There may be no graceful way to do it, but avoiding the work means that the movie buys into exactly the kind of thinking Perry is lampooning – that writers are Writers, living certain kinds of lives ruled by privilege, self-indulgence and creative impulse, and that these lives are what matters most. They’re not just sentence-makers but demigods in tweed, blessed with loftier ambitions than the rest of us, and less rigorous morality, and are free to be pigs in the process.

Without a taste of the writing itself – of how Philip manages to achieve beauty or greatness despite himself – Perry’s film ends up feeling one-sided and thin, a deft riff on a New Yorker stereotype that doesn’t dare to scratch the surface. It’s Philip who did the work, and if that work is any good, it has to harbour at least a few molecules of generosity and empathic insight. Where’s that guy?

Related to Film of the week: Listen Up Philip