Film of the week: Exhibition 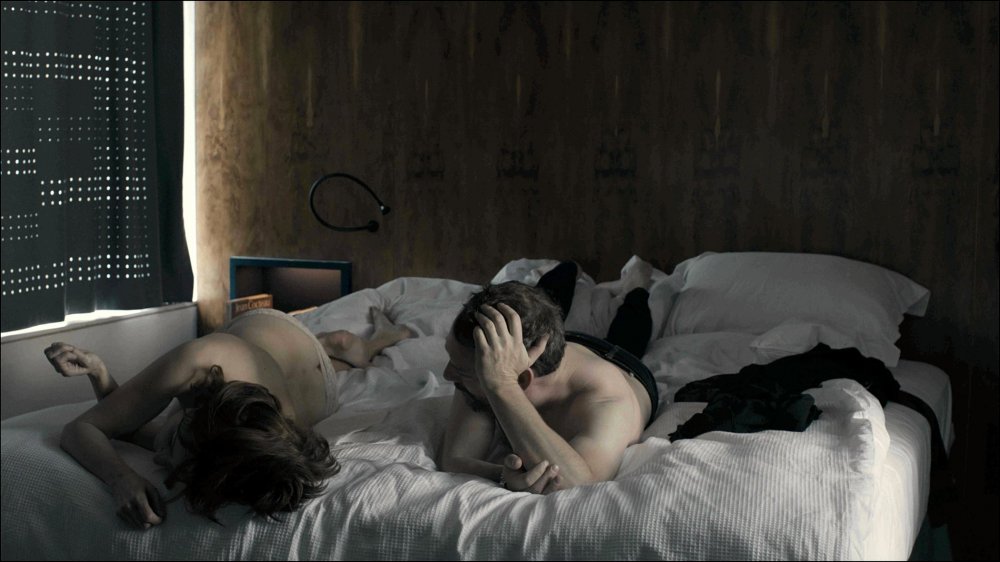 Home is where the art is: Viv Albertine and Liam Gillick as married middle-aged London artists D and H

From its outset – a flatly declarative title card leading straight into a shot of D (Viv Albertine, formerly of the punk group The Slits) lying prone, pressed up against a full-length window – Exhibition proclaims itself to be an assertively front-facing film: an object knowingly placed on view, inviting or challenging us to contemplate it from outside.

The work-in-itself is here also and inextricably a work-on-itself, a commentary on, or interrogation of, its own being – indeed, its very being in the first place commensurate with that commentary.

If that self-reflexivity is hardly unprecedented in the history of art cinema, there nonetheless seems to be a more recent urgency about it, given the ongoing and seemingly inevitable transformation of the cinematic medium. The work of almost any great artist always carries with it an implicit why: why shoot a scene from here instead of there? Why cut here? Why stop there? Nowadays, the work of artists great and good often seems to be asking, “Why make a film at all?” – or, less drastically, “How to make a film at all?”

This doesn’t mean that we should take the creative agonies and stray statements of authorial intent uttered by D and H, the professional artists who are Joanna Hogg’s protagonists, as the tout court principles of the director’s own practice any more than we should in the case of the prattling, buffoonish male filmmakers in Hong Sangsoo’s assorted tales of cinema, or the relentless form-and-function philosophising of the directorial pseudo-/neo-/non-avatar in Corneliu Porumboiu’s When Evening Falls on Bucharest or Metabolism (2013). In all these films, however, the distance between subject(s) and maker is being purposely, pointedly reduced; the characters’ working-out or working-through of their own creative conundrums and questions is also, to some extent, the work being undertaken by the films in which they appear.

In Exhibition, those questions gain in interest as the film builds on a scenario that at first seems like something of a Hanekean readymade, a Londonite riff on the cinema of urban unease and bourgeois self-imprisonment. The stunning-cum-oppressive house – all cubes and floor-to-ceiling glass built around the central coil of a spiral staircase – within which H (played by conceptual artist Liam Gillick) and D enact their mostly unspoken connubial discontent initially seems an almost parodic exaggeration of the Austrian godfather of gloom’s sterile interiors, not least in the intercoms via which the couple communicate disembodied queries, requests, veiled barbs and terms of endearment. (“I love you,” says H’s crackling voice, over a shot of an empty room – in a weaker film, only the strong could repress a groan.) 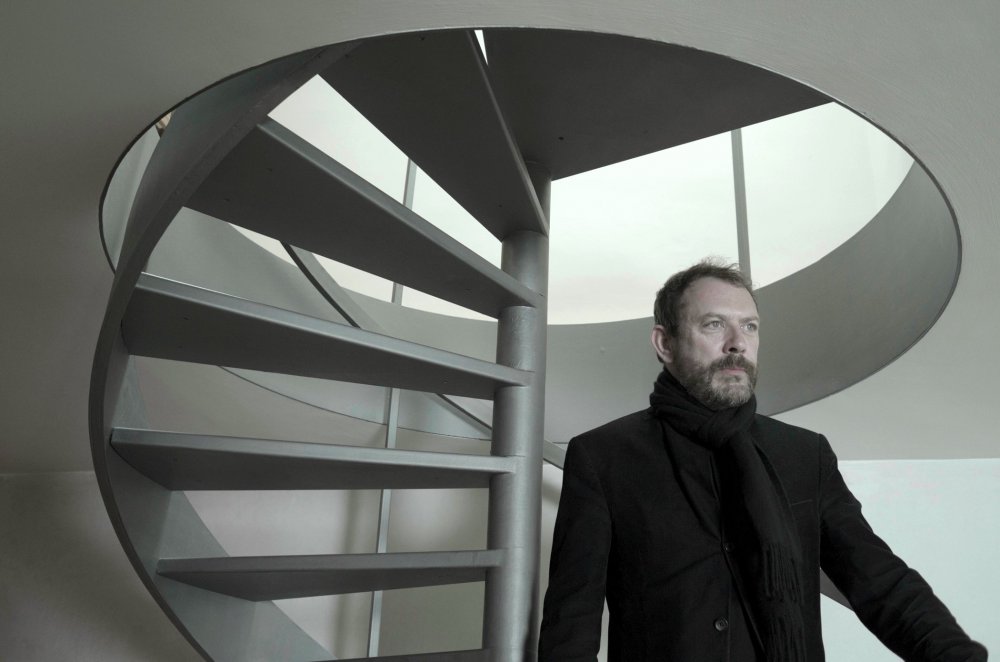 These first impressions are only fortified by the de facto disquisition on the everyday tyranny of the bourgeois male that Hogg stages within this (seemingly) despotic space. In H’s appeals to D to let him see and comment on her work, Gillick perfectly captures the tone that transforms the nominally helpful into the actually hectoring, while on the physical side Hogg notes how even absence can become a form of aggression: the recurring sound of H’s office chair rolling across the floor above D’s workspace is a neat aural reminder of the patriarchal power pervading this domestic space.

Hogg is after something more complex here, however, and as the film plays out she qualifies these pervading senses of menace, anxiety and oppression by showing how D feeds them into her inchoate artistic practice. As she gradually adds more layers of staging and preparation to her onanistic endeavours, it becomes evident that these sessions are not (or not only) means of private escape but precursors to public display. 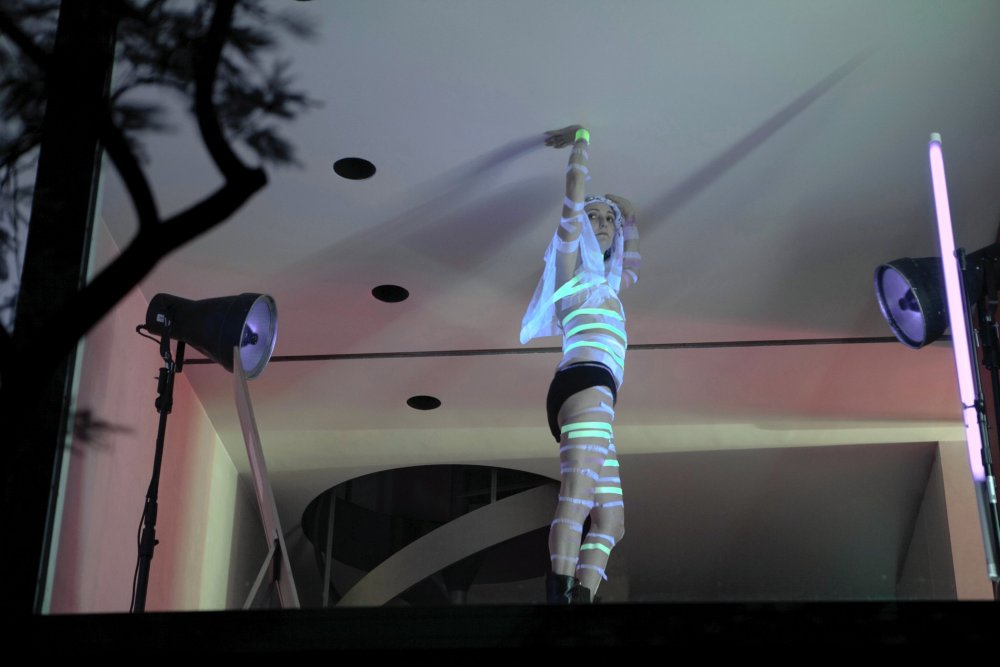 And just as Hogg thus blurs the line between psychodrama and art-making, so she shows how D’s fragility, though surely deriving at least in part from her domination by both spouse and house, carries its own unspoken strength. The unspecified agoraphobic anxieties that have kept D so often confined to the house are suddenly overturned when she gussies herself up and heads out for a surreal/imagined solo night on the town, which concludes with her impossibly watching herself from an audience as she and H engage in an onstage discussion about her refusal to discuss her work with him. The bad/no sex of the film’s early passages (at one point D lies like a rag doll on the bed as H fruitlessly attempts to awaken her erotic interest, or at least participation) is dispelled by episodes of joyful rutting between the two, some imagined but some apparently actual.

Furthermore, and crucially, D’s neo-Antonionian posturing and lolling about the house’s stark modernist interiors are revealed to be not a pantomime of alienation but an attempt to feed off the building’s energies, both its aesthetic dynamism and the lived experience imbued within its walls. At one point, D speaks to a friend via Skype about her regret over selling the house, mentioning that the previous occupants had lived there into their eighties; indeed, the actual house was built by architect James Melvin as a home for himself and his wife after their children had grown up and moved out.

Thus Hogg quietly subverts the cultural expectations we bring to such modernist monuments, in films and life both. These spaces do not signify sterility but offer spiritual succour; and, contra the claims of D and H’s neighbours that the house is suited to artists rather than families (ie ‘real life’), the film’s final shot shows children playing within the house, not transforming the space but using it. 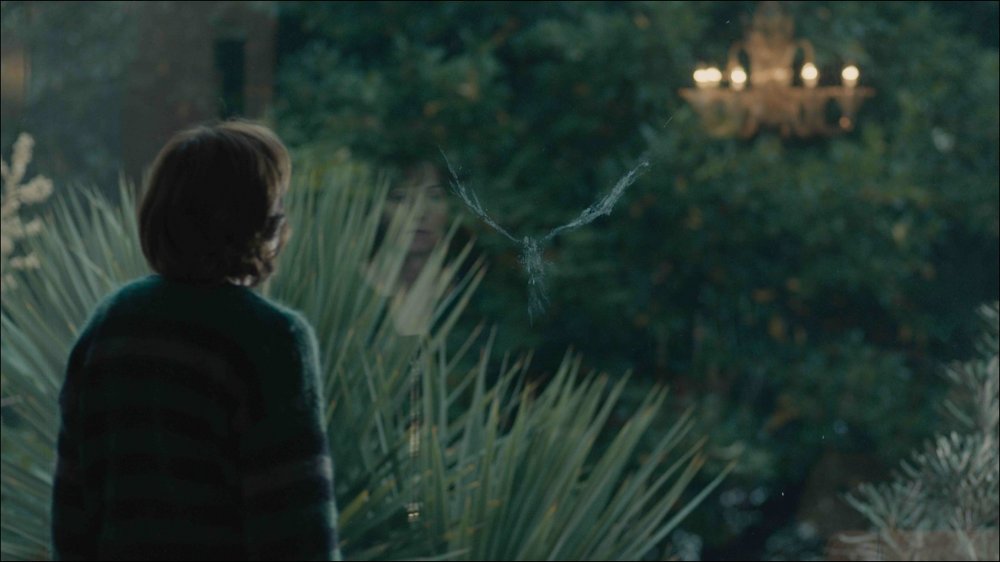 Hogg is not simply validating old modernist dreams here, however. Not only does she remain acutely aware of the class basis of these aesthetic niceties – D and H’s discussions with their brokers speak eloquently to the monetisation of sentiment that undergirds the real-estate business, while that romping clan in the final shot is seen from street level, their domestic bliss safely insulated from the outside world – but the couple’s almost ghostly disappearance from the film in the final sequence keeps that original sense of creeping dread alive. Eros is still sick in our post-Antonioni times but on the evidence here Apollo isn’t exactly in the pink either. If art can still provide us with liberatory spaces, we’re now inescapably aware of how bound up it is with forces of oppression, domination and entrapment.

It’s surely this awareness that has relentlessly steered the discourse of art away from the finished product and towards ‘process’ and ‘practice’, the work-in-itself towards sheer working – for if art remains perpetually unfixed, there is still a (distant) possibility of avoiding those pitfalls.

“I want the work to be ongoing throughout the time I’m there, with no end in sight,” says D of her prospective exhibition. “Every day will be something different. I’ll improvise and make mistakes and take wrong turns and it will all be there, for all to see.” There’s surely some conscious irony at work in the fact that this paean to the protean comes at the end of such a polished, purposeful and meticulously constructed film.