Everything you needed to know about the heady world of pre-Code Hollywood – plus Polish visionary Walerian Borowczyk reappraised, Lukas Moodysson on We Are the Best!, John Michael McDonagh on Calvary and Jeremy Thomas, super-producer.

In print and digital from 4 April. 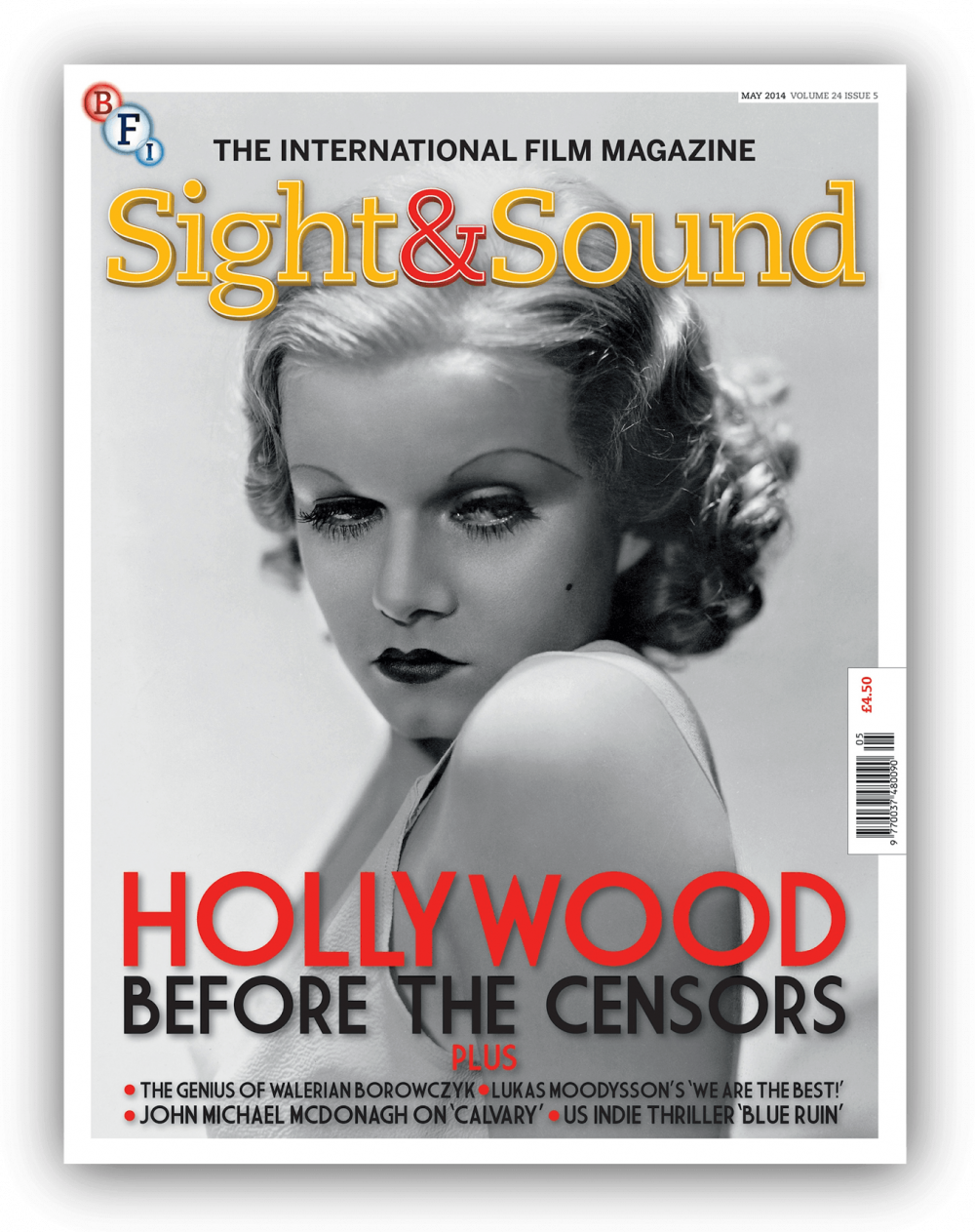 With the timelessly seductive and glamorous Jean Harlow gracing the cover, our May issue invites you to succumb to the allure of the dangerous and the forbidden, as our Deep Focus feature explores the heady ‘pre-Code’ period in early-1930s Hollywood, when the puritanical restrictions of the so-called Hays Code were gleefully and roundly ignored by the studios.

Here we find a different Hollywood cinema – naughtier, rougher-edged and more shocking than anything audiences would see again until the 1960s. It was a period in which the gangster first burst on to movie screens; when horror movies were truly horrid; when the bitter realities of the Great Depression were laid bare in gritty social dramas; and when bad girls, adulterers, gold diggers and charming con artists ran amuck.

This was also a period which saw studios define their particular styles, and new stars burst onto screens: soon to be legendary figures such as Harlow, Barbara Stanwyck, James Cagney, Clark Gable, Mae West, Joan Blondell and Edward G. Robinson, as well as figures such as the “king of pre-Code” Warren William and Ruth Chatterton, whose stars burned brilliantly in the pre-Code era alone.

As our Deep Focus season opens at BFI Southbank, London, Mike Mashon sets out the historical context of this most fascinating period in Hollywood history, James Bell explores the films’ various transgressive themes and Dan Callahan surveys the stars whose careers were made and lost in those wild years. As Mae West might have said, when Hollywood was good, it was very good, but when it was bad, it was better…

A filmmaker whose work always challenged puritans and the censors was the Polish maverick Walerian Borowczyk, whose films ranged from remarkably inventive animations through surreal fairy tales and on to unflinchingly provocative and explicit erotica. Eight years after his death, the visionary director’s magnificently perverse, confrontational and often misunderstood narratives are reappraised and contextualised by David Thompson.

The famed British producer Jeremy Thomas is a maverick of a different kind. In the second half of an extensive career overview, Thomas talks to Nick James about his relationships with Nicolas Roeg, Bernardo Bertolucci and David Cronenberg, and why he has had to “mutate or die” in order to continue working successfully in an increasingly conformist modern industry.

A filmmaker who has consistently shirked off predictability and conformity is the Swedish director Lukas Moodysson, who has returned to the observant, upbeat charm of his early films with We Are the Best!, about a trio of young female misfits in Sweden in the early 1980s who decide to form a punk band. He talks to Ashley Clark about the punk spirit and keeping his internal engine burning.

The Irish director John Michael McDonagh is another filmmaker who seems intent on pursuing his own path. Following the well-received The Guard, he talks to Trevor Johnston about the influences behind his latest film Calvary, a tale of a priest living under the threat of death – from Melville and Bresson to Home and Away.

Our Wide Angle section includes a profile of artist filmmaker Hito Steyerl, a report from this year’s AV festival and a reappraisal of Chris Marker’s San Soleil.

In the DVD and Blu-ray section we celebrate the revival of Bill Forsyth’s debut feature That Sinking Feeling, as well as his much-loved breakthrough Gregory’s Girl.

All this and much, much more…

In the brief window between the announcement of the Hays Code censorship guidelines in 1930 and the creation of a body with sufficient resources to implement them in 1934, Hollywood studios were able to portray America with a realism previously unseen in its history. Here,  Mike Mashon explores the history of demands for a system of moral oversight and shows how conservatives lobbied to enforce it, while James Bell examines the new-found freedoms filmmakers enjoyed in their depiction of taboo subjects from adultery and poverty to crime.

Plus: Changing of the guard

A new roster of stars shot to fame in the pre-Code era, but some soon started to flounder in the clampdown that followed. By Dan Callahan.

John Michael McDonagh’s follow-up to  The Guard tells the blackly comic tale of a rural Irish priest who is threatened with death by a vengeful parishioner. Here, the director outlines his influences, including Hitchcock, Melville, Bresson… and Home and Away. By Trevor Johnston.

The late Polish director may have alienated some critics with his idiosyncratic career  trajectory – travelling from masterful short animations and the visual poetry of his early features Goto, Isle of Love and Blanche to the dismal softcore travesty of Emmanuelle 5  – but his perverse, confrontational narratives are now ripe for reappraisal. By David Thompson.

After more than a decade of dark, difficult work from Lukas Moodysson, the director has returned to the observant, upbeat charm of his earliest ﬁlms with We Are the Best!, a tale of a trio of young female misﬁts in Sweden in the early 1980s who decide to form a band. By Ashley Clark.

The Sight & Sound Interview: Jeremy Thomas part 2 – The making of a super-producer

In the concluding part of our career overview, the veteran producer outlines his rapidly developing profile following his return from Australia where his feature debut, Mad Dog Morgan, was shot in 1975. He discusses his longstanding creative relationships with Nicolas Roeg, Bernardo Bertolucci and David Cronenberg, laments the passing of a wild era of maverick filmmaking led by ‘extremists’ such as Sam Peckinpah, and explains why he has had to ‘mutate or die’ in order to continue working successfully in an increasingly conformist modern industry. Interview by Nick James.

In the frame: Adventures in wonderland

After six decades, the French animated classic The King and the Mockingbird finally makes it to British screens in its intended form. By Andrew Osmond.

As Claudia Weill’s 1978 Girlfriends gets a rare screening in London, Violet Lucca celebrates movies about women trying to make it in NYC.

To get his revenge drama Blue Ruin made, director Jeremy Saulnier first had to try to disown his  ‘goofy’ horror-comedy debut. By Catherine Bray.

Robyn Davidson’s nine-month trek across Australia was nothing next to her book’s near 30-year journey to the screen, reports Charles Gant.

The numbers: The Grand Budapest Hotel

How a cherished project by an important filmmaker just managed to survive a ‘clarification’ of tax regulations. By Ben Roberts.

Belgian cinema is flourishing as never before – and the head of the Flanders Audiovisual Fund can claim a lot of the credit. By Geoffrey Macnab.

Artists’ moving image: After the crash

Straddling cinema and gallery, Hito Steyerl sifts ideas, images and objects from the detritus of contemporary capitalism. By Nina Power.

Soundings: Get my drift

A silent film festival on the edge of the Firth of Forth takes place in a venue that’s the cinematic equivalent of a hug. By Bryony Dixon.

Festival: A study in terra

This year’s AV Festival in the North-East of England, exploring the theme of ‘Extraction’, proved anything but earthbound. By Isabel Stevens.

After the Night
Almost Married
Calvary
Captain America  The Winter Soldier
Cupcakes
Dangerous Acts  Starring the Unstable Elements of Belarus
Divergent
An Episode in the Life of an Iron Picker
Escape from Planet Earth
The Informant/Gibraltar
The Invisible War
Ironclad 2  Battle for Blood
Khumba
The Last Day on Mars
Locke
Looking for Light  Jane Bown
The Love Punch
The Lunchbox
Magic Magic
The Motel Life
Muppets Most Wanted
Non-stop
Omar
Pioneer
The Quiet Ones
The Raid 2  Berandal
The Sea
300  Rise of an Empire
Tracks
20 Feet from Stardom
Veronica Mars
We Are the Best!
We Are the Freaks
Wrinkles/Arrugas
You & Me Forever
Yves Saint Laurent

Deadly games: The 10th Victim + Investigation of a Citizen Above Suspicion

Dead of Night
The Ealing Studios Collection Volume 1
Foreign Correspondent
Man in the Dark
Many Wars Ago
Phantom of the Paradise
Roma, Seven Samurai
This Is Not a Dream

Jack the Ripper
The Mistress
Nichols

One of the Prague Spring’s most irreverent flowerings, Daisies lets its anarchic, psychedelic tendencies play themselves out with a bang. By Carmen Gray.