Film of the week: Amour

Commandingly executed as ever, Michael Haneke’s study of love’s ultimate transcendence defies expectations with compassion for its characters and respect for its audience, says Catherine Wheatley. 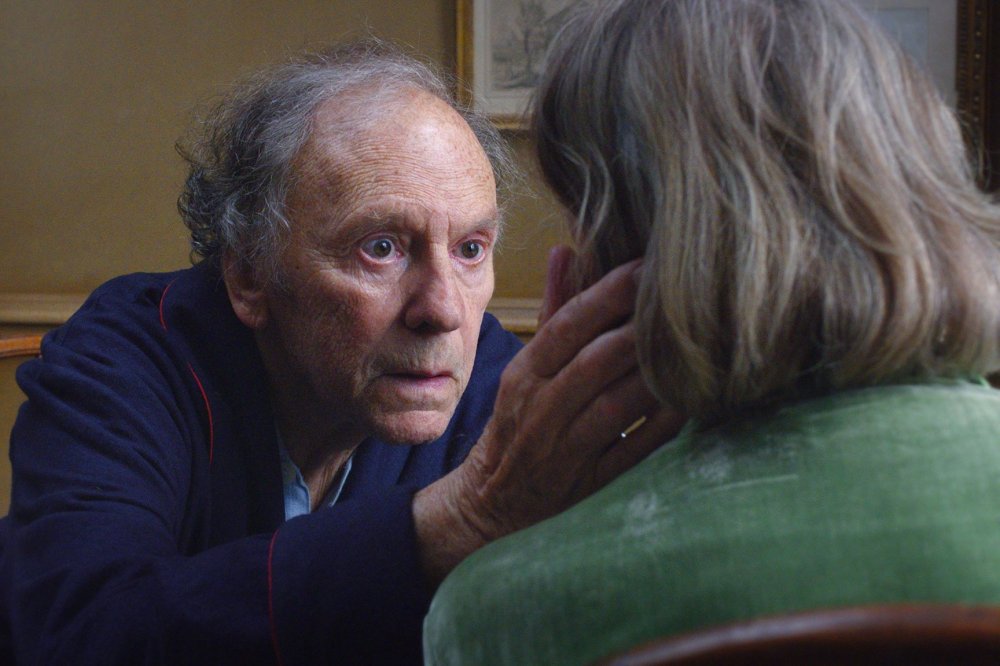 Michael Haneke and his collaborators have long made a habit of wrong-footing audiences. Over the course of his 25-year career, idyllic escapes have turned to group suicide, generic thrillers to loaded critiques of media violence. Suspense offers no catharsis; post-apocalyptic dramas refuse to reveal their catastrophes. Given the Austrian auteur’s rise to arthouse darling over the past decade, few will be expecting a film with the title Amour, then, to be a hearts-and-flowers affair. And yet with his latest work Haneke has perhaps pulled his biggest surprise out of the bag: far from the excruciating, excoriating ordeal one might have expected, Amour emerges as a delicate and tender elegy for a lifetime of love.

In a pair of breathtaking performances, Emmanuelle Riva and Jean-Louis Trintignant play Anne and Georges Laurent, married former music teachers enjoying – at least initially – the spoils of retirement. They are happy, affectionate, active and content. The sitting room of their Paris apartment is handsomely furnished, full to the brim with books and sheet music, centred around a gleaming baby grand. Unlike their namesakes in Haneke’s 2005 film Hidden, they are an authentically cultured couple whose interest in the arts far exceeds the mere appearance of erudition. The spines of their paperbacks are cracked and worn; in their tired but cosy kitchenette, they pour each other tea and compare notes on the new biography of conductor Nikolaus Harnoncourt. Haneke treats them fondly, piling on none of the scorn that he has heaped on previous protagonists of his films.

Amour opens with an ominous, unsettling flashforward which renders all that follows a foregone conclusion. So despite early red herrings, such as an attempted break-in and (in an unusual use of handheld camera) a bizarre, Lynchian dream sequence hinting at a haunting, we are prepared for it when Anne suffers a stroke, and when her condition subsequently worsens. Less expected, perhaps, is the unshakeable loyalty that Georges shows to his wife.

Haneke and Riva (incredibly brave, utterly convincing) don’t shy from showing Anne’s deterioration in all its mundane horror, as she gradually loses control of her limbs, her bladder, her voice. At her lowest point she is little more than a terrible, twisted shell of herself. And most terrible of all is the fact that she knows it. Some critics have understood her descent into gibberish as dementia, but a scene in which she furiously refuses to eat or drink suggests that there is a mind trapped within the body, one which knows refusal is the only form of control left to it. In the face of her rage and rejection, Georges tends to her with an uncommon grace. He may be frail – his attempts to hoist her from bed to wheelchair resemble a slow, shuffling two-step – but until the film’s very end he is her fierce protector, as his final act of devotion makes devastatingly clear.

There are elements of Haneke’s signature style in Amour. As ever, he is in absolute control, carving a sleek, marbled sculpture out of his material. Repeated here are the trademark shots refracted through mirrors or multiple doorframes, and down long, empty corridors; the elaborate recreations of bourgeois interiors; the intense spatial precision; the careful choreography of bodies in order to draw our gaze through the frame until it comes to rest on precisely the spot that the director would have it. Here, too, are the sudden, shocking eruptions of violence that momentarily cause hands to fly, unthinkingly, to mouths – although in one case the prompt is purely verbal.

Yet DP Darius Khondji (who previously worked with Haneke on his Funny Games US remake) imbues the interior of the apartment – where almost all the film takes place  – with a gentle warmth that softens Haneke’s usual edges, an effect heightened by the director’s first conventional use of a non-diegetic soundtrack. Remarkably too there is little place for didacticism or smug reflexivity. An early shot of the Laurents seated within a theatrical audience notwithstanding, Haneke plays it more or less straight here.

What Haneke give us with Amour is a love story, one that is compassionate, powerful and intelligent, and that treats its protagonists and its audiences with respect. Coming from such a punitive director, such unexpected kindness is blindsiding. It is also, undeniably, immensely moving.

Related to Film of the week: Amour