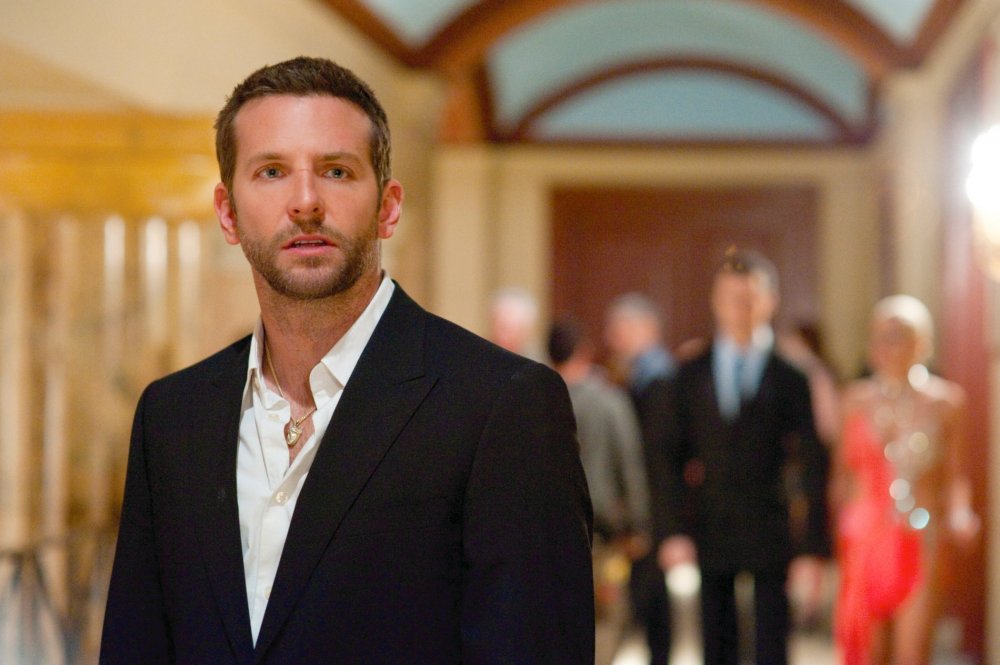 Is it possible to make a romcom that isn’t a wrist-slashingly depressing exercise in cute? That’s more or less the question which the subgenre of indie-romcom was invented to answer, and with the laugh/wince Venn diagram recently redrawn by Jason Reitman’s squirm-inducing Young Adult, it’s now de rigueur to crank up the predictable kookiness of the all too obviously mismatched couple way beyond eccentricity and into the realms of seriously demented dysfunctionality.

For his part, David O. Russell has already proved that he’s got the nerve to tackle a sassy genre reboot: 2010’s The Fighter complicated the hackneyed one-last-shot, plucky-underdog sports plot by daring to gaze unblinkingly at despair, addiction and addled family values. Silver Linings Playbook pulls off the same gloriously satisfying trick, but with a few more belly laughs, simultaneously embracing and subverting its genre to tell a feelgood story about love that won’t make you throw up into your popcorn.

Russell’s smart, snappy script is delivered by a top-notch cast, including two thoroughly likeable and well-matched leads in the form of Hangover star Bradley Cooper, as bipolar life-wrecker Pat, and Jennifer Lawrence, freshly famous from The Hunger Games, as damaged young widow Tiffany. The film also boasts a fine turn by Robert De Niro as Pat’s father, Pat Sr – a grouchy, sofa-bound gambler stuffed into a collection of ill-fitting polyester sportswear – as well as Chris Tucker, in a rare non-Jackie Chan outing, as Pat’s friend Danny. Like Pat, Danny is as mad as a bag of frogs – not surprising, since they met at a mental hospital, where Pat had been incarcerated after nearly killing his wife’s lover in a fit of jealous mania.

That kind of backstory might be off-putting to your average Hollywood love interest, but hey, Tiffany is nuts too – at least, she’s being treated for depression because she reacted to her husband’s death not with picturesque grief but by sleeping around and generally acting up. Is she mad? Heck, who isn’t mad? Pat’s superficially stable friend Ronnie (John Ortiz) is so henpecked and hard-pressed that he’s constantly contemplating suicide; even salt-of-the-earth tough guy Pat Sr has a touch of OCD and a delusional belief that his beloved football team, the Eagles, will only win if his son watches the game with him. 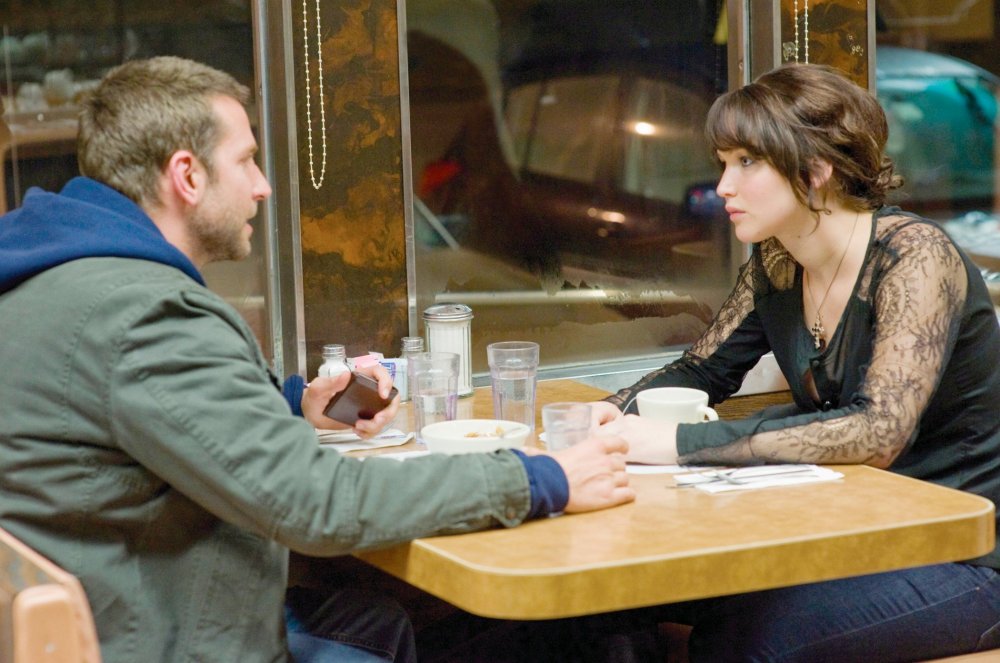 Back in the 1960s, this madness-is-relative line chimed with the anti-authoritarian times: the philosophy of Michel Foucault and the radical practice of R.D. Laing dovetailed nicely with Ken Kesey’s 1962 One Flew over the Cuckoo’s Nest – not filmed until 1975, making the resulting Oscar-magnet even more political. There is a hint of the same libertarian recalcitrance here, too, in the early scene where Pat’s mother (played with matriarchal feistiness by Jacki Weaver) insists on removing him from hospital against the doctors’ orders (“But he was just getting used to the routine here!” “Exactly – I don’t want him to get used to it”).

But Russell’s take on Pat’s madness also has a lot to do with the wise-fool archetype: the jester falls over and makes an idiot of himself, but he’s permitted to utter truths that no one else can bring themselves to voice. Simultaneously, we’re constantly reminded that Pat and Tiffany live, not in the real world, but in the comic-romantic universe, where mental illness is harmless and amusing. Their craziness serves the romcom genre’s sine qua non: hopeless cases finding love against the odds.

Because, despite the film’s superficial edginess – typified by the restless handheld camerawork  – we all know that the movie playbook being rifled here is heavily weighted towards schmaltz and indeed dreck. The very title could not be clearer: we’re getting silver linings and happy endings whether we like it or not. Pat, who has swallowed the Disney credo that dreams really do come true, is certainly very definite on this point – in fact he’s obsessively, insistently, manically sure that his happy ending will turn up any second. But – fool that he is – he thinks this will take the form of a reconciliation with his wife, and will be the result of his willingness to lose weight, get fit and improve his mind by working through the reading list she gives her high-school students.

Wrong! The jogging is fine, because it brings him into contact with Tiffany, who runs after him with ‘perfect girlfriend’ written all over her. But Pat’s laborious self-improvement is a road to nowhere. Tough truths are ejected from his mental landscape when he hurls Hemingway’s A Farewell to Arms – top of that marriage-saving reading list – through a window in disgust with an author prepared to snatch happiness away from his long-suffering protagonists. As the camera lingers on the fallen book lying in the dirt, we know that the film is saying a farewell to sombre plot twists too.

So where will the silver lining come from? Official forms of therapy are as pointless as muscular prose: unlike the life-changing counsellor who usually shows up in mental-health storylines to help the hero beat his demons (see Robin Williams in Good Will Hunting), Pat’s shrink is the ineffectual Dr Cliff Patel (Anupam Kher), who urges him vaguely to “get a strategy” but only really has an impact when Pat meets him, off duty and besieged by racists, at an Eagles game.

The ensuing brawl becomes the turning point which ushers in the third act and its inescapably triumphant momentum – not because it takes place in the rarefied arena of sporting endeavour, but because it brings home the messiness and madness that Pat and Tiffany cannot and must not escape. Pat has gone to the match to satisfy his father’s crazy superstition and enable him to win the enormous and illegal bet he’s hoping will save him from penury. When this plan goes wrong, it’s not because it’s insane: it’s simply not insane enough, as Tiffany manages to prove in a hilariously cathartic showdown. 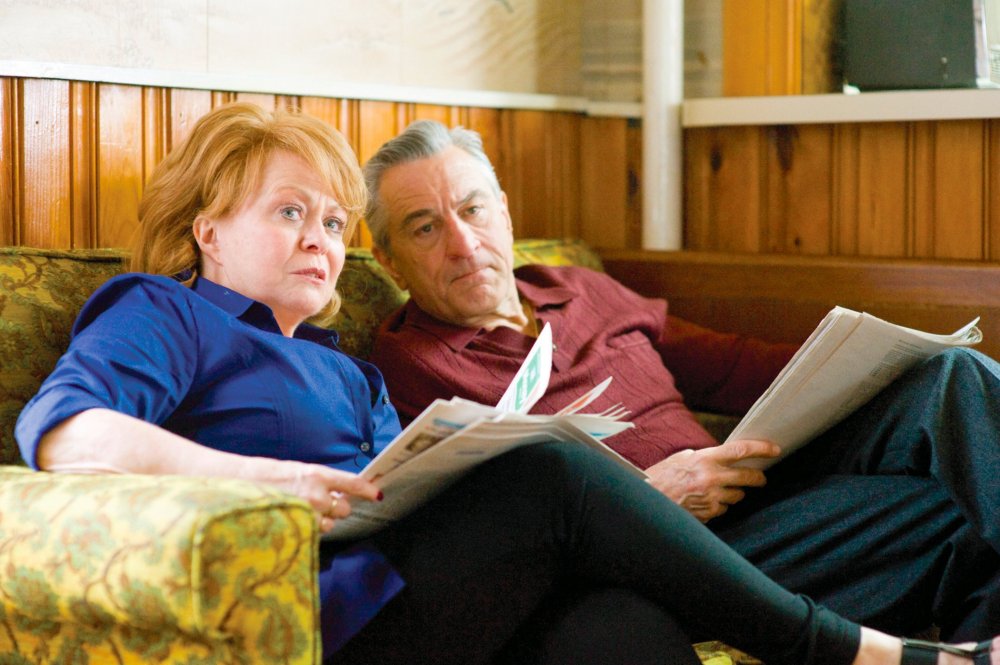 Like Little Miss Sunshine (2006) without the disturbingly sexualised children, the plot now turns on a ludicrous quest to take part in a pointless competition, in this case a fancy ballroom dance-off. Tiffany, for no reason other than a vaguely hinted therapeutic payoff, has her heart set on taking part, and Pat agrees to partner her in return for her help in contacting his ex-wife.

Now from the standard playbook, we know that such dancing contests represent a shot at self-improvement for low-status characters like Saturday Night Fever’s Tony Manero, or else they promise sexual initiation to uptight virgins like Baby Houseman in Dirty Dancing. All that grunt and effort, we’re sure, will yield magic and beauty in a condensed, supercharged version of the great American myth. Sure, except that former teacher Pat’s status has been on an inexorable downward slide ever since his violent outburst, and Tiffany, far from being a doe-eyed innocent, is “that crazy slut with the dead husband”. Will dancing cure them? No! But it will be fun.

That you still care about and root for this idiotic couple all the way to their hopelessly hokey final embrace is a tribute to the sheer warmth of the characters Russell has sent spinning through their choreographed romcom routine. And it’s also, perhaps, a tribute to our willingness to surrender to the foundational if delusional premise of romantic comedy, that one essential generic element which Russell can’t subvert, whatever liberties he takes with the rest: a happy ending before the credits roll.