Nick Cave beckons you into the caverns of his mind. 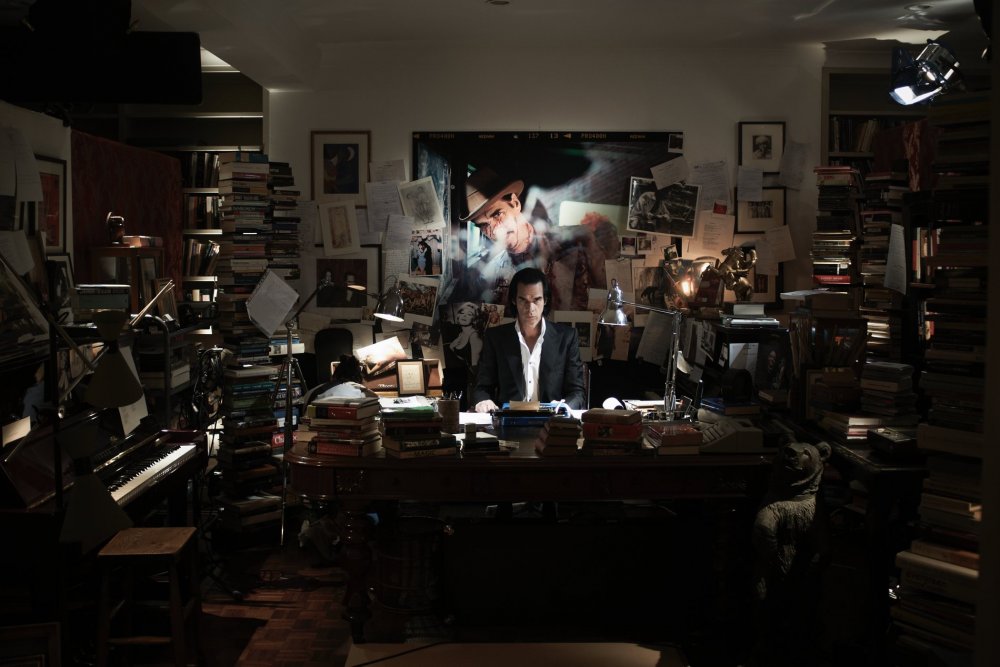 In this feature-length portrait, Nick Cave recalls the teenage days when he’d pore over LP covers projecting himself into the stellar personae of favourite artists.

Now, of course, amid an ongoing recording and touring career that has lasted more than three decades, he’s become something of an object of veneration himself, having assembled a prolific body of work whose lyrical concerns put a very personal spin on the old blues terrain of sex, death and religion (and all points in between). The ‘vinyl revival’ notwithstanding, today’s dreamy wannabes are less likely to be mesmerised by album or CD artwork, and perhaps instead gaze on their idols through the now established medium of the advertorial arts doc, where an artist allows the cameras a peek at their creative process, sundry pundits and collaborators fill out the context, and with luck the result boasts enough journalistic integrity to sit beside the project’s value as a promotional tool.

Directors Iain Forsyth and Jane Pollard come from an art-world background but here display a grasp of the advertorial form long familiar on TV. Delivering intimate footage of Cave at home, in the studio and on stage, they eavesdrop on an encounter with his shrink, follow his discussions with the archivists bravely trying to catalogue the detritus of his drug-fogged earlier career, and pepper the whole thing with pop-up appearances from key cohorts – actor Ray Winstone, guitarist Blixa Bargeld and pop icon Kylie Monogue (whose duet with him gave Cave his closest encounter with the mainstream).

Accompanied by a valuable ruminative voiceover from Cave himself, pondering the interconnectedness of his many narrative songs, the whole artefact offers a fascinating portrait of an artist and performer with a relentless drive to create. There is, however, one tantalising notion that differentiates all this from business-as-usual muso fare on BBC4, for while Forsyth and Pollard seem to be offering an authentic rendering of Cave at work and play, their film is so atmospherically staged and beautifully woven together that it might just be too good to be true. Is there, in fact, any way to tell reality from fabrication in these evocative, alluring frames?

Of course, there’s obvious artifice involved in Kylie happily pitching up in the back seat of Cave’s car, or the way this ostensible day-in-the-life traverses space and time by intercutting live and studio performances from hither and yon. But when Cave glides the length of an impossibly green lawn adjoining what we presume to be his own white-walled mansion, the atmosphere is so utterly dreamlike that it transcends the bounds of vérité. Similar frissons abound, such as the visit to a supposed Cave archive that’s like something out of a Harry Palmer movie, or indeed the too-perfect idyll of lunch with resplendently beardy bandmate Warren Ellis in a fairytale cottage overlooking the white cliffs of Dover.

Yet if these oneiric moments give us pause for thought, should we be questioning everything else we see? Is that Cave’s actual shrink? Does the very convincing Cave archive really exist? It almost feels like a plot spoiler to reveal that both are constructs, since Cave apparently met leading Freudian analyst Darian Leader for the first time on the day of filming, and there is a Cave archive but it’s at the Melbourne Arts Centre and not in his adopted Brighton. On screen, though, Forsyth and Pollard give absolutely nothing away, since the ramifications of not quite knowing what you’re looking at are the point and the pleasure of this exercise in mystique.

Given that Cave himself ponders whether he’s now become trapped in the rock-star image he’s projected himself into, doomed forever to tread the boards in his gold-lamé shirt knocking ’em dead, it’s tempting to read the film as a sort of walk-in projection of that self-image, in which actual veracity is less of an issue than the shared collusion of artist and audience. In their series of 14 short films Do You Love Me Like I Love You, Forsyth and Pollard gathered colleagues and fans to hold forth on Cave’s albums, thus positing the extensive discography’s hold on the communal imagination. Cave himself didn’t contribute to that project, but here he puts his side of the story. The result succeeds on many levels, as a primer on Cave for those new to the party, as a fan souvenir boasting full-on performances of the best material from his latest Push the Sky Away album, and as a teasing, artful offering for aesthetes intrigued by the fluid relationship between artist, audience and marketplace.

Intelligently conceived and exquisitely crafted, it’s also still on some level a promotional tool, and a product of Cave the sometime diary-keeper’s dedicated self-regard. Whether that hint of narcissism or the commercial element involved takes some shine off the film’s artistic achievement is one for debate, but Cave’s writing credit suggests this is how he wants to present himself, and judging by the fierce-willed individual on display here, he’s not one to be argued with. 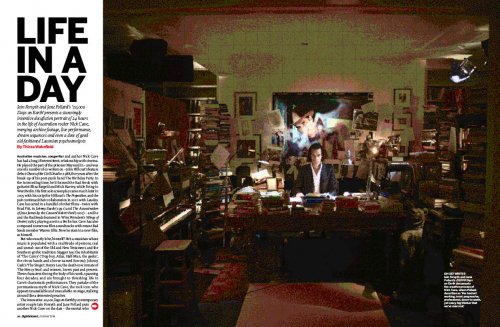 Thirza Wakefield talks to Iain Forsyth and Jane Pollard about 20,000 Days on Earth, a stunningly inventive docufiction portrait of 24 hours in the life of Australian rocker Nick Cave.

Life in a day