In print and digital from 5 September. 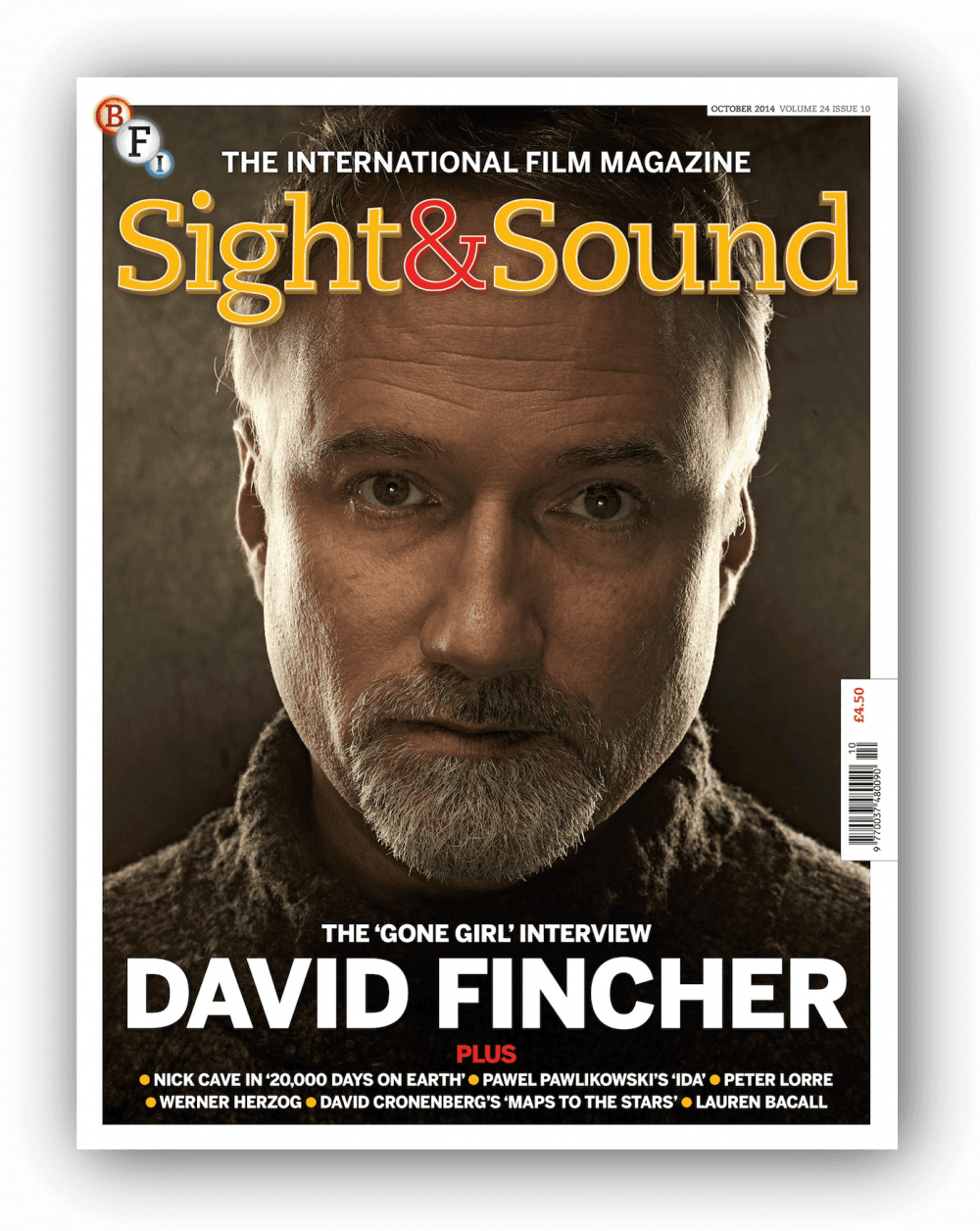 David Fincher has in recent years established himself as the man to shepherd blockbuster adaptations with consummate polish and meticulous style – whether it’s putting his unmistakeable stamp on The Girl with the Dragon Tattoo, or steering engrossing re-workings of British television series such as House of Cards or his upcoming take on Channel 4’s Utopia. His new feature is a perfect case in point, with Fincher bringing novelist Gillian Flynn’s bestselling Gone Girl to the screen. An engrossing exploration of the dark secrets at the heart of a dysfunctional marriage, starring Ben Affleck as a husband suspected of foul play after the disappearance of his wife (Rosamund Pike), it’s perfect material for Fincher. The director talks to Nick James about the narcissism of modern relationships and whether he’s made a Fatal Attraction for our times.

Another artist drawn to the gloomier sides of human nature is Australian musician and songwriter Nick Cave, the subject of 20,000 Days on Earth, a stunningly inventive new docufiction by British artist filmmakers Iain Forsyth and Jane Pollard that merges live performance, archive footage, dream sequences and even a dose of good old-fashioned Lacanian psychoanalysis. They tell Thirza Wakefield about working with Cave, “the hardest working, most progressive, professional, down-to-earth, yet crazy-big thinker that we’ve ever met”.

Cave has long been cast in the role of doom merchant, and another figure both defined and confined by his persona was the German actor Peter Lorre, whose first big on-screen role, as the grotesque pop-eyed child-killer in Fritz Lang’s M, instantly marked him out as one of the all-time greats, but also haunted him for the rest of his career, seeing him typecast in a series of films playing melancholy psychopaths and sadists. Philip Kemp explores the career of one of cinema’s greatest actors.

If Lorre couldn’t escape the image cast by his breakthrough, then neither, argues David Thomson, could the late Lauren Bacall transcend the legend she established in her two most famous films with husband Humphrey Bogart, The Big Sleep and To Have and to Have Not. Was her career thereafter one of more limited achievement?

The spectres of Hollywood’s past also hang over David Cronenberg’s latest vicious satire, Maps to the Stars, in which Julianne Moore gives a blistering performance as a self-obsessed actress living in the shadow of her late movie-star mother. Cronenberg talks to Nick James about Tinseltown and ghosts.

Lastly for this month’s features, Michael Brooke profiles the work of one of cinema’s great margin walkers, the Polish director Pawel Pawlikowski.  Pawikowski’s work has straddled documentary and fiction, and his latest feature, Ida, an exploration of the legacy of the Nazi occupation of Poland, is perhaps his finest work to date, and affirms his obsession with exiles and outsiders.

Our Wide Angle section meanwhile, includes a report form this year’s Locarno film festival as well as a profile of the long-overlooked Brazilian filmmaker Ozualdo Ribeiro Candeias and more.

Elsewhere, we review all of the latest UK theatrical releases, including Frederick Wiseman’s At Berkeley, Matthew Warchus’s Pride, Ben Rivers and Ben Russell’s A Spell to Ward Off the Darkness and James Brown-biopic Get on Up.

Our DVD and Blu-ray section considers an exhaustive new boxset of Werner Herzog’s films alongside revived British TV science fiction series The Changes and much more. Our Books reviews include a new study of the work of Fred Zinnemmann and a monolith-like celebration of Kubrick’s 2001.

COVER FEATURE: Love is the devil

David Fincher’s big-screen version of Gillian Flynn’s bestselling novel Gone Girl explores the dark secrets at the heart of a dysfunctional marriage. Here the director discusses the narcissism of modern relationships and the slippery art of manipulating expectations of innocence and guilt. By Nick James.

Life in a day

For all of the generous obituaries that accompanied Lauren Bacall’s recent death, her status as a Hollywood legend is actually built on just two films – To Have and Have Not and The Big Sleep. In everything else, she was at best respectable, at worst lost. By David Thomson.

Throughout his career, Pawel Pawlikowski has shown an unwillingness to be constrained by commercial or editorial pressures, and  demonstrated a particular affinity for exiles and outsiders – and his latest, Ida, a drama examining post-WWII Poland, is no exception. By Michael Brooke.

Peter Lorre’s first big on-screen role, as the grotesque pop-eyed child-killer in Fritz Lang’s M, instantly marked him out as one of the all-time greats, but it also haunted him for the rest of his career, seeing him typecast in a series of films playing melancholy psychopaths and sadists. By Philip Kemp.

David Cronenberg’s vicious Hollywood satire Maps to the Stars is powered by a blistering performance by Julianne Moore as a self-obsessed actress living in the shadow of her late movie star mother. Here the director explains why Tinseltown finds it so hard to escape the spectres of its past. By Nick James.

In the frame: London calling

With the BFI London Film Festival looming, we offer a few tips to help guide you through the maze of great films on offer. By Isabel Stevens.

Object lesson: A show of hands

Dead hands on screen often appear to be more than mere flesh and bone, retaining sensual vestiges of their erstwhile owners. By Hannah McGill.

On the eve of the rerelease of Salvatore Giuliano, we choose the major works from a towering figure in post-war Italian cinema. By Pasquale Iannone.

In the face of arrest, travel bans and censorship, the Iranian director Mohammad Rasoulof remains determined to provoke. By Ehsan Khoshbakht.

The Traverse City Film Festival has not only been a boon to the local economy, it’s shown the enduring public hunger that exists for cinema. By Mark Cousins.

The tale of an unlikely partnership between striking miners and gay activists only came to fruition after years chipping away at the coalface. By Charles Gant.

Brewster: Laughing to the bank

What does the success of The Inbetweeners films mean for the more commercially challenging work for which Film4 is known? By Ben Roberts.

Pioneer of Direct Cinema and close observer of the realities of American political power in the era of JFK and Civil Right. By Adam Nayman.

German Marxist filmmaker who criticised the constraints Western society places on our bodies and our imaginations. By Nicole Brenez.

Ozualdo Ribeiro Candeias spent nearly 40 years portraying Brazil’s forgotten poor – and has been all but forgotten himself. By Aaron Cutler

Soundings: Blue is the coolest colour

The movies have always loved the sound of jazz. What they’re not so keen on is what the music means, and the pain that lies behind it. By Daniel Barrow.

A tale of early piracy that is a good deal more Blackburn than Blackbeard. By Bryony Dixon.

Even in a programme dominated by experimental work, Locarno found room for a host of eccentric, humorous and chatty tales. By Isabel Stevens.

At Berkeley
Pride
A Spell to Ward Off the Darkness

All Cheerleaders Die
Alleluia
Attila Marcel
Ballet Boys
The Expendables 3
Get On Up
Grand Piano
Guardians of the Galaxy
The Guest
The Guvnors
Hector and the Search for Happiness
Hercules
The Hundred-foot Journey
Ida
The Inbetweeners 2
In Order of Disappearance
Into the Storm
I Origins
The Last Impresario
Let’s Be Cops
Life of Crime
Lucy
Magic in the Moonlight
Maps to the Stars
Million Dollar Arm
A Most Wanted Man
Night Will Fall
Palo Alto
Planes Fire & Rescue
Salomé
Sex Tape
Step Up All In
They Came Together
Think Like a Man Too
20,000 Days on Earth
A Walk Among the Tombstones
Watermark
What We Did on Our Holiday
Wilde Salomé
Wish I Was Here
You and the Night

Even when not filming in perilous conditions or far-off locations, Werner Herzog is interested in the extremes of the human experience. By Michael Brooke.

Jacques Demy was a great pop artist – but his reputation for frothy exuberance ignores the often bitter realities of his subject matter. By Nick Pinkerton.

The world gone mad: The Changes

A forgotten 70s children’s series about survival in an unravelling society reveals much about the state of the nation at the time. By Rob Young.

Films starring Charles Bronson
Caught
Favorites of the Moon
Hearts and Minds
House of Bamboo
Madame Dubarry
The North Star
Armored Attack!
The Roots of Heaven
Stranger on the Prowl
Films by François Truffaut
We’re in the Movies: Palace of Silents & Itinerant Filmmaking

Broadcast in 1987, the television drama Road was Alan Clarke’s devastating response to Margaret Thatcher’s ‘war on the North’. By Nick Wrigley

Fred Zinnemann and the Cinema of Resistance

Watching Them Be: Star Presence on the Screen from Garbo to Balthazar

The Making of Stanley Kubrick’s 2001: A Space Odyssey

Man with a Movie Camera and The Ukraine

Dont Look Back and the S&S Documentary Poll

Billy the Kid: a right-handed gun

The Ballad of Narayama

Death is not the end in Imamura Shôhei’s bleak tale of a village community’s struggle for survival, just another stage in the cycle of life. By Jasper Sharp.