Film of the week: Pride

Welsh miners and London queers meet under the cosh of discrimination in this plucky (and timely) Ealing-esque look back to the 1984-85 miners’ strike. 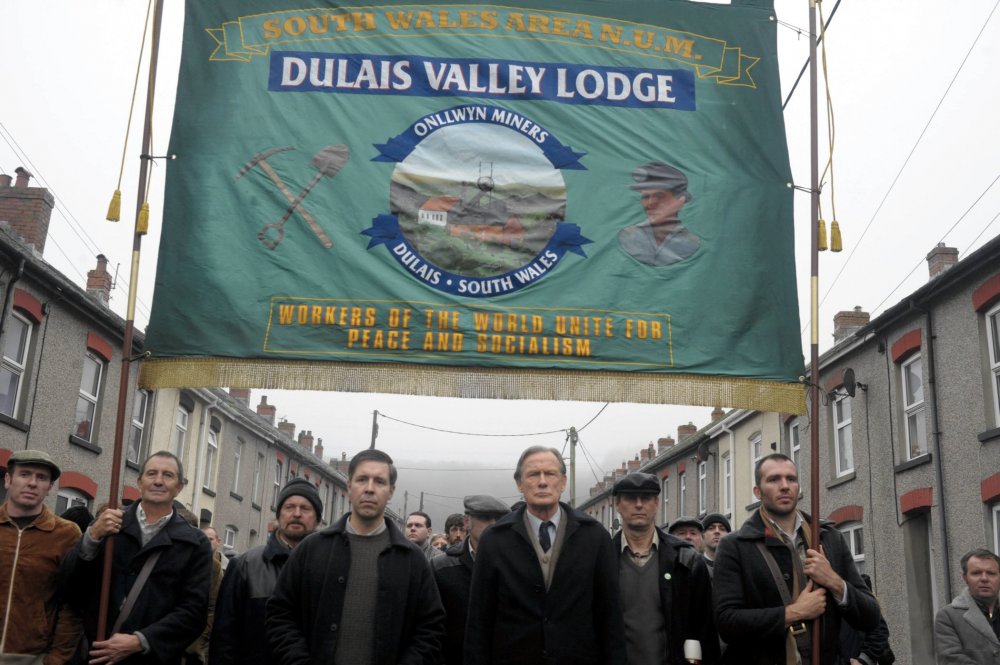 United we stand: the personal is invariably political in Pride, which focuses on public actions rather than private feelings

I recently argued in the Guardian that lesbian, gay, bisexual and transgender cinema is currently undergoing something of a ‘backward turn’: an increasingly sizeable body of work has emerged over recent years comprising films that could be considered retrospective in one of several, sometimes overlapping ways. These include documentaries about aspects of queer heritage; shorts and feature films about older characters; and features with period settings, usually based on true stories. (The redistribution in festivals, through general release and on home-viewing platforms of LGBT-interest titles from the archives could also be considered part of this trend.)

Rather than evidence of an appetite for nostalgia or comfort viewing, however, this tendency seems to represent a moment of taking stock. In recent years, in the industrialised world, the struggle for LGBT rights has become closely bound to the pursuit of equal access to institutions such as marriage and military service. Now that those goals seem to have been substantively achieved, there’s space to breathe and become reacquainted – or, for younger audiences, acquainted for the first time – with facets of past queer experience that might be useful in preparing for whatever is to come.

As an account of the real-life 1984-85 alliance between the London fundraising group Lesbians and Gays Support the Miners (LGSM) and the people of Onllwyn, a mining village in Wales’s Dulais Valley, Pride falls squarely into the period-picture category. But like most such backward-looking films, it evidently has the future in mind: in its engaging, funny, affecting, even inspiring way, Pride is essentially a rousing paean to joined-up activism in an era of radical conservatism. It benefits from a story you couldn’t make up: a town-and-country culture-clash tale taking place over exactly a year, set against Britain’s last gasp of popular socialism on the one hand and the rise of Aids panic on the other. But, some invented characters and situations aside, it did happen. Even more surprising, the clashes in this case were pretty mild: after initial wariness, LGSM did get a welcome in the valleys, if not unalloyed appreciation.

Still, even in 2014 its subject matter might put some mainstream audiences off, and the makers of Pride opt to counterbalance such reservations with an eminently accessible formal approach. Director Matthew Warchus offers little in the way of striking cinematic innovation: the technical style is straightforward, rooted in simple, well-lit set-ups punctuated by spectacular landscape shots or moments of handheld suspense, with a practically incessant soundtrack incorporating pop, traditional music and orchestral score, nudging emotions this way or that as well as helping to cement an efficiently conjured sense of period. 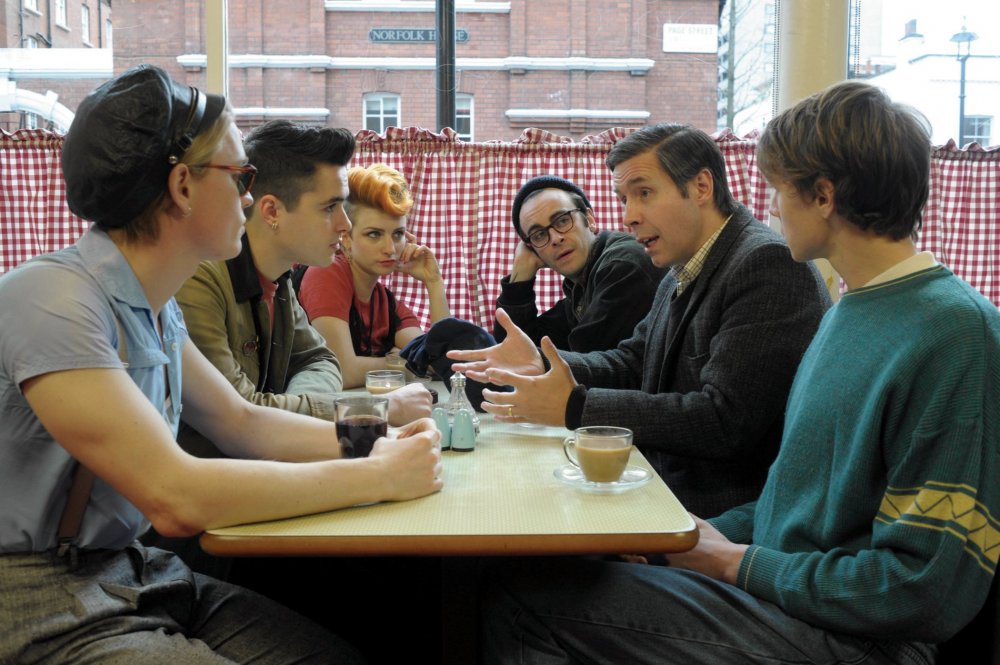 Pride also boasts a cast packed with reassuring screen presences, including Bill Nighy, Imelda Staunton and Paddy Considine, all on fine form on the Onllwyn side, as well as less familiar but thoroughly sympathetic faces on the London side. The one misfire in the name of populism (I presume) is Dominic West’s casting as an outré and unabashed veteran queer campaigner in the vein of Quentin Crisp or Bette Bourne; floaty scarves, alas, do not a fierce femme make, and The Wire’s McNulty keeps glinting through. In terms of period-appropriate queer filmmaking, then, the overall approach is closer to the sly but big-hearted who’d-have-thought-it social observations of Stephen Frears’s My Beautiful Laundrette (1985) than the exquisite lyrical alienation of Derek Jarman’s The Angelic Conversation (1987).

In its embrace of formal conservatism, the film echoes Milk, Gus Van Sant’s 2008 tribute to San Francisco’s pioneering gay municipal politician Harvey Milk. It was true to the approach of his subject that Van Sant adopted an easily digestible formal strategy in the name of a progressive expansion of empathy, and something similar but different is at work here.

In the case of Milk (which drew heavily on Rob Epstein’s documentary The Times of Harvey Milk, released in 1984 during Pride’s period setting), the form was biopic and the apt tone one of inspirational martyrdom. In this culture-clash affair, it’s an unmistakably British appeal to down-to-earth humour, eccentricity and a sense of fair play. (This is surely the first film in which an old dear chirps: “Dai, your gays are here!”) The focus ranges across a dozen characters rather than a single salutary figure – from the nervy adolescent closet case living with his parents to the feisty young campaigner, the warmly no-nonsense village organiser and the bigoted busybody. (Village life is more or less matriarchal.) 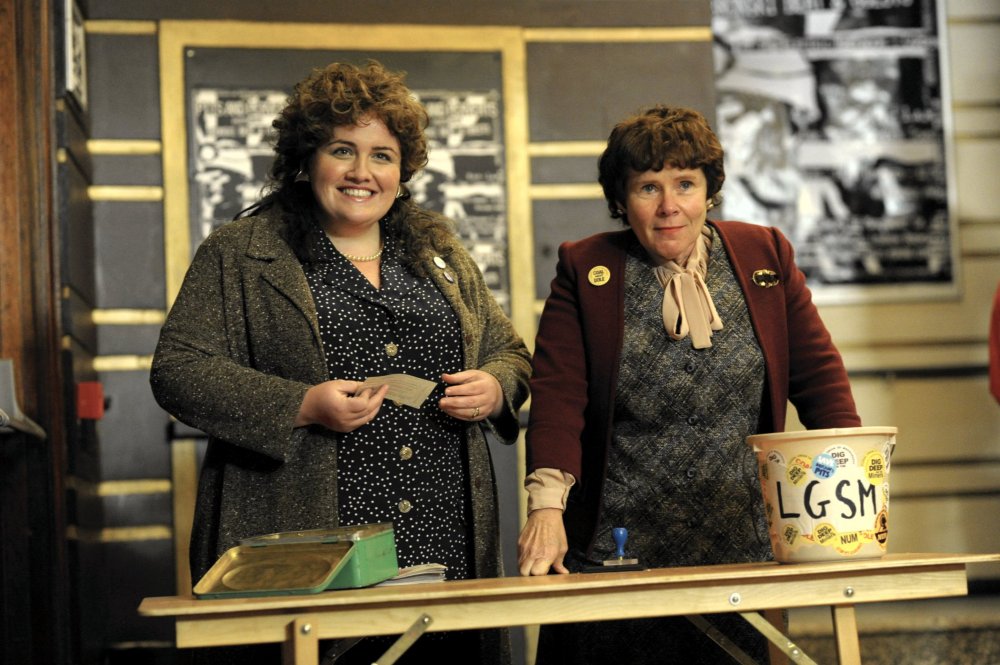 This compounds the sense that Pride belongs in a lineage, reaching back to Ealing, of plucky British comedies in which sleeves are rolled up, offbeat friendships forged and true colours revealed while potentially contentious social subjects hover around the edge of the frame; titles such as Personal Services (1987), Beautiful Thing (1996), Brassed Off (1996), The Full Monty (1997) and East Is East (1999) come to mind, as well as some Ken Loach.

Yet the deft handling of its extended company perhaps also speaks to the project’s theatrical pedigree – the screenplay is by Stephen Beresford, writer of the National Theatre’s The Last of the Haussmans, and Warchus is Kevin Spacey’s successor as creative director of the London Old Vic (as well as director of the largely forgotten 1999 feature adaptation of Sam Shepard’s Simpatico). In general, a balance is well maintained between a rousing sense of mission and individual lessons learnt and challenges overcome.

The shape of the story is not so much a triumphal arc with a tragic falling-off as a cycle of advances and retreats that’s seen to extend back to earlier decades and forward to the present and beyond. This does result in a somewhat episodic feel by classical standards, especially in the final act, but makes a pleasant change from narratives of implausibly blunt and final personal transformation. The plot isn’t driven by budding romances or seething personal vendettas; this is very much a story about public actions rather than private feelings. Or rather, the personal is invariably political: not only is one leading character’s first kiss not the beginning of a romance, it’s timed to coincide with the rousing finale of a speech about solidarity.

Solidarity, in fact, is what the picture is about. If there’s little explosive violence here, there’s still shock and indignation in the quotidian belittlement of both constituencies – miners and gay people – by those in power. Small moments of thoughtless homophobia and union-bashing stick in the craw, successfully engendering empathy across apparently wide distances. In essence, Pride is a feelgood treatise on intersectionality, the utterly timely idea that systems of oppression and discrimination inevitably overlap and are most fruitfully considered and confronted in relation to one another. Or, to put it another way, disco and brass bands might go together better than you’d expect.

Related to Film of the week: Pride