Film of the week: Lilting

A tender, potent study of loss and loneliness in fly-by-night London. 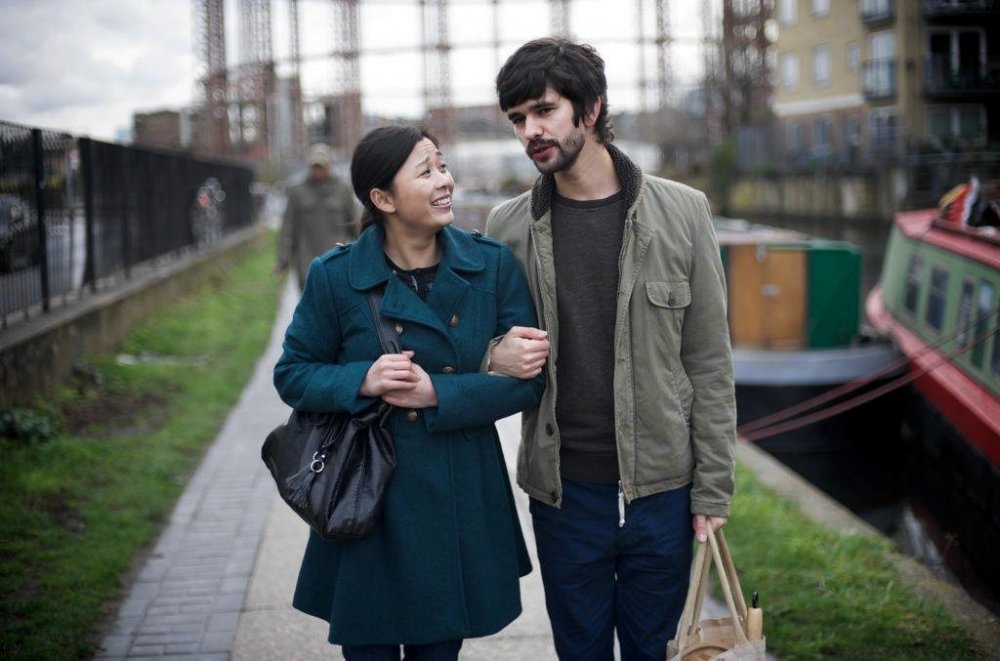 Lilting – the debut feature by Cambodian-born, UK-based Hong Khaou – is a tender, low-key examination of grief, fractured communication and the inherent emotional danger of building one’s whole life around a single person.

It stars Ben Whishaw as Richard, a young man reeling from the recent death of his boyfriend, Kai (Andrew Leung). In a haze of grief, Richard visits Kai’s mother Junn (famed Chinese actress Cheng Pei Pei) at the drab retirement home where she was guiltily secreted by her son shortly before his death. Richard is met with a frosty reception; the isolated, non-English speaker Junn was heavily dependent on Kai for company and support, and is resentful of Richard for hogging her only son’s precious time. She is, however, apparently oblivious to the fact that Richard and Kai were an item.

Borne of a desire to keep Kai’s memory alive through Junn and achieve a personal sense of closure, Richard resolves to forge a relationship with the resentful lady, and spots his opportunity when he discovers that she is dating an old English gent (Peter Bowles, amusingly dry). Ostensibly to oil the wheels of the elderly lovebirds’ relationship, Richard employs a friendly young British-Chinese woman named Vann (the lively, likeable Naomi Christie) to act as an interpreter. The ensuing narrative quietly makes hay from intricately exploiting the tense, cavernous spaces that emerge between what’s verbalised and what isn’t (how long, for example, can poor Richard keep his and Kai’s secret?) and between what’s intended and understood: thanks to the delicate, multilingual set-up, almost every exchange carries an unpredictable dramatic charge. 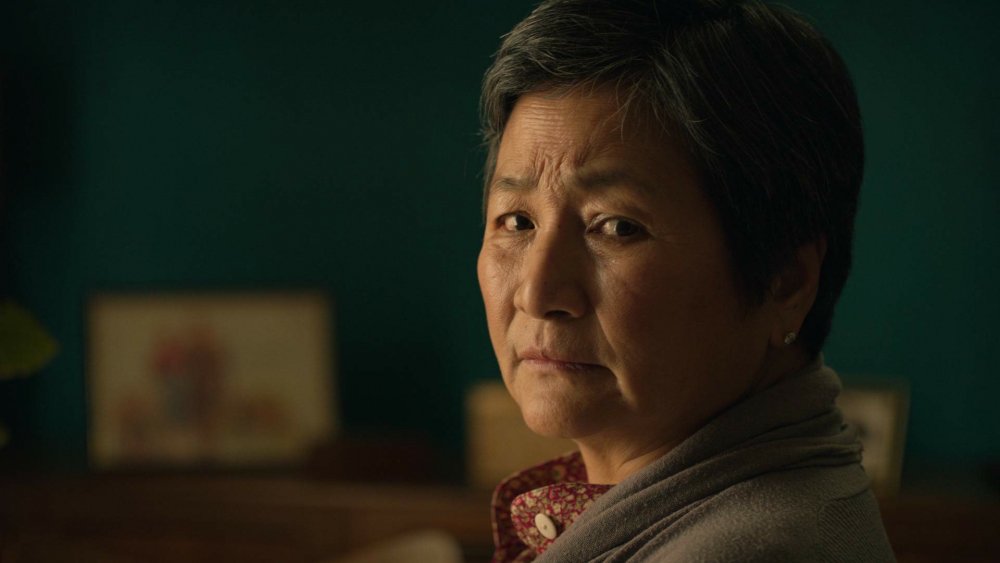 Lilting, the latest offering from Film London and BBC Films’ Microwave scheme for low-budget independent cinema (its budget: £120,000), began life as a play. Though it’s not difficult to imagine it being staged successfully, the material translates well to film, and even suits its low budget. The small cast and limited range of locations add to the overall aura of intimacy, while Khaou makes excellent use of cinema-specific techniques. He frequently employs searching close-ups and tight framing to accentuate characters’ isolation, highlighting the importance of their gestures and facial expressions. There are, for example, a number of finely wrought close-ups of Cheng, who gives a subtle, still performance of bruised stoicism, with flashes of irrepressible irritation. Junn’s backstory – she is a disillusioned Cambodian-Chinese immigrant unwilling and unable to acclimatise to new surroundings – constitutes one of the film’s most quietly moving threads.

Lilting also benefits from intelligent use of elliptical transitions, which often collapse temporal states without the need for an edit. Khaou’s biggest formal gamble is to periodically and unexpectedly insert disorienting sequences of Kai interacting with either Richard or Junn; his scenes with Richard take the form of intimate flashbacks, while those with Junn have a more hallucinatory quality, made notable by Ula Pontikos’s slightly impressionistic cinematography. It’s a smart use of form to keenly evoke that strange, hard-to-communicate time in the aftermath of a bereavement, when the departed person remains a palpable presence despite their corporeal absence. One long take set in a greasy-spoon café morphs imperceptibly from a businesslike discussion between Richard and Vann to another, more personal chat between Richard and Kai. Gradually it dawns on us why Richard has chosen to take Vann to this particular café: because memories of his relationship are rooted there. 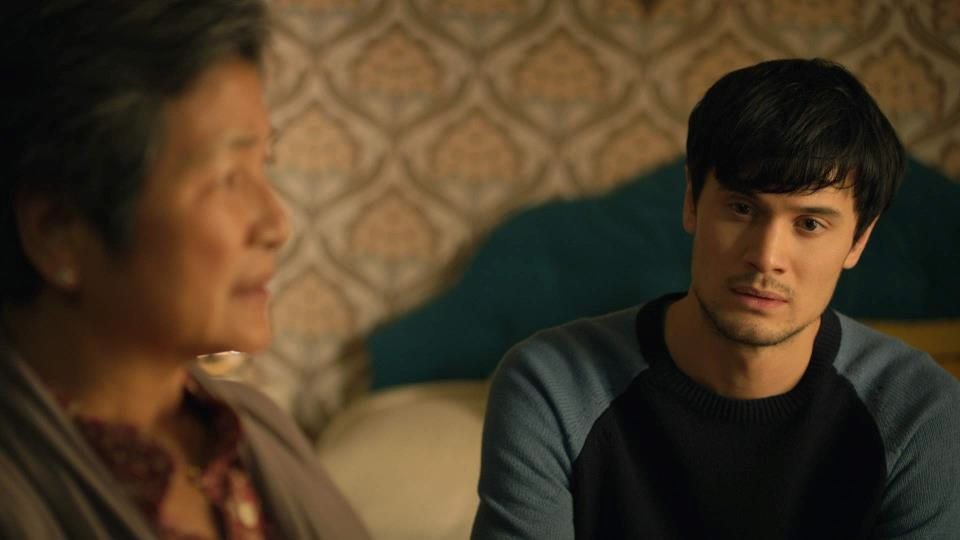 Intriguingly, in play form, Lilting didn’t feature a gay theme: the Richard character was the widower of a suddenly deceased woman. However, Khaou – who for a number of years worked as head of home entertainment at specialist UK LGBT distributor Peccadillo Pictures – made the change to add a further layer of dramatic intrigue. It works beautifully, and carries an added resonance given recent developments in the trajectory of LGBT cinema.

In a recent article for the Guardian, the critic Ben Walters convincingly situated Lilting in a current trend of ‘backward-looking’ LGBT cinema that has emerged in a time of “apparent legal equality, with less demand for big-screen expressions of cathartic angst or romantic wish-fulfilment”. This trend, continued Walters, includes “small-scale, naturalistic, bittersweet” works characterised by “present-mindedness and a willingness to explore grief, so often deferred through the years of struggle”.

Lilting also puts me strongly in mind of Michael Winterbottom’s Chekhov-inspired masterpiece Wonderland (1999), with which it shares not an LGBT theme but a quiet naturalism and a strong sense of London – frequently depicted on film as a bustling metropolis – as a lonely, chilly place. Like Wonderland, Lilting largely excises London ‘landmark’ imagery from the frame. Instead, there are mere flashes of city iconography – a reflection of a red bus here, a rushing train there – all of which evoke a thematically apposite sense of transience and impermanence. 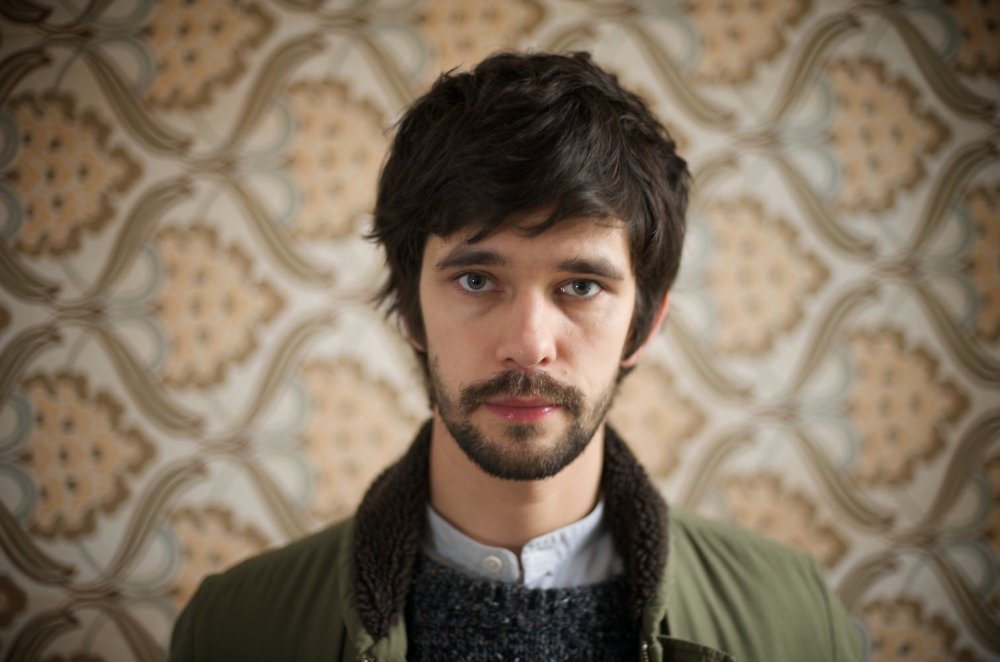 Though in most respects a remarkably confident and composed first feature, Lilting is not without its flaws. Leung gives a spirited turn in his limited screen time, but he is not (yet) in the same class as Whishaw, and the imbalance in the quality of their acting – particularly in crucial, intimate scenes – can be striking. I was also a little sceptical about Khaou’s decision to withhold the exact circumstances of Kai’s death until such a late juncture in the story – the film has enough authentic, character-rooted drama for this lie of omission to come across as an unnecessarily manipulative leveraging of suspense.

The final word should be reserved for Whishaw, who gives an extraordinarily moving performance as the grieving man. The first time I saw him in action was nine years ago, when he played the small but memorable role of put-upon PA Pingu in Nathan Barley, Chris Morris and Charlie Brooker’s scathing satire of clueless Shoreditch media types. Barley was a show of outsize comic performances and baroque cruelty – poor Pingu is electrocuted by his hipster-monster boss – but, amid all the madness, Whishaw communicated a bruised, tragic sadness that would have tonally unbalanced the show had he been on screen for any great length of time.

With his limpid eyes, gentle voice and rangy yet fragile physicality, Whishaw brings the same heartbreaking qualities to Lilting, and he’s in almost every scene. His embodiment of grief is utterly convincing, and he gives an unselfish performance, vacillating fluidly between compassion, petulance and tenacity, all the while seeming so vulnerable that he could shatter into a million pieces at any moment. One lump-in-the-throat reaction shot of Richard, coming after Junn unexpectedly compliments his technique of using chopsticks to fry bacon – a technique obviously taught to him by Kai – might be the most quietly devastating piece of acting I’ve seen all year. 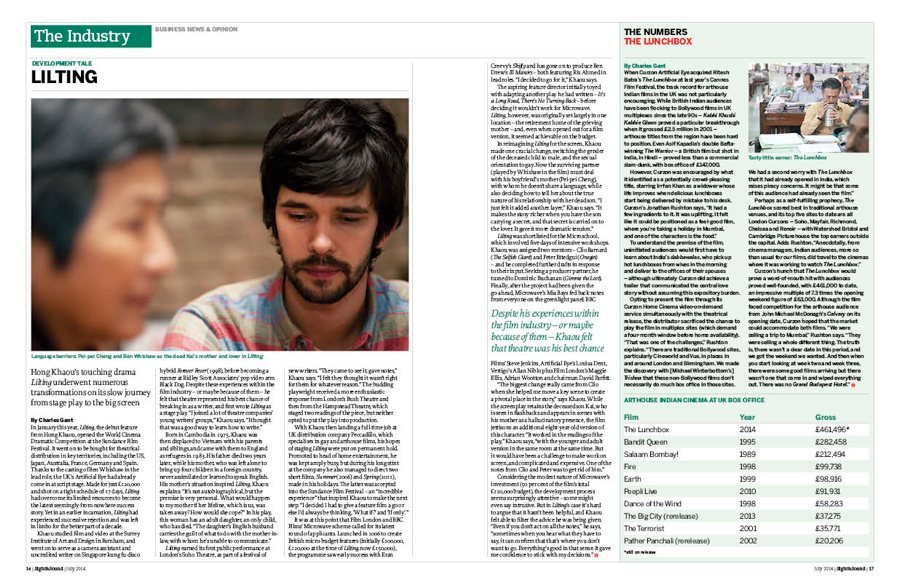 Related to Film of the week: Lilting