Lakeside cruising and what lies beneath.

There can be something quite awful about the sun on the water. The sparkle and dazzle of the light as it plays across the ever-changing surface of the depths – there’s beauty there, of course, but also power, danger and unaccountability, the coming together of forces massively indifferent to human pleasure, malice, ecstasy or destruction. So bright. So deep. So easy to lose one’s bearings or, having slid beneath the waves, to seem never to have been there at all. An ideal setting for sex or killing.

Plein soleil (1960), Knife in the Water (1962), Le Mépris (1963), Dead Calm (1989), The Talented Mr Ripley (1999) – all have exploited this awful allure to good effect. Now, Stranger by the Lake, from French director Alain Guiraudie, unites this particular nexus of beauty and jeopardy with another, that of the gay subculture suspense thriller (a subgenre probably still typified by the 1980 Al Pacino movie Cruising).

Franck (Pierre Deladonchamps) spends his summer days hanging out at a lakeside cruising spot, its bright beach and clear water punctuated by mostly nude men idling the time away in conversation, eyeing each other up and occasionally repairing to the nearby hilly woodland for a friendly fumble. Franck spends a good bit of time in platonic conversation with Henri (Patrick d’Assumçao), a middle-aged man whose wife has recently left him. But really he has eyes only for Michel (Christophe Paou), the handsome, moustachioed newcomer whose allure remains intact – or is it even enhanced? – when Franck witnesses him coolly drowning his current beau, Pascal (François-Renaud Labarthe). Succumbing, it seems, to a kind of folie de la plage, Franck embarks on an intense affair with Michel even as Henri flags up the danger and a police inspector (Jérôme Chappatte) starts sniffing around.

Though not well known beyond a band of devotees on the festival circuit, Guiraudie has been building a distinctive œuvre for more than a decade now, showing particular interest in exterior locations and interior dislocations: his camera gets out and about while his stories mess with the insides of his characters’, and audiences’, heads. He’s a Cannes favourite: Stranger by the Lake took both the director’s prize in Un Certain Regard and the Queer Palm in 2013, while three previous features have played in Directors’ Fortnight.

In the first of these, 2003’s No Rest for the Brave, a teenager becomes convinced that he’ll die if he falls asleep; he is soon pursued across the campagne by forces of both order and criminality, is associated with killings, finds the cohesion of his identity compromised and sees his lover subsumed by water. In Time Has Come (2005), factions of an imaginary feudal society of warriors and shepherds are at each other’s throats, slippage everywhere evident in relationships, loyalties and personalities.

The gay sexuality fairly casually incorporated into such works became more central in 2009’s The King of Escape, even as a sense of mutability and a rural setting remained: a few years into his forties, Ludovic Berthillot’s Armand decides that gay life is unfulfilling and that he might as well give heterosexuality a go. Here too the tone is fluid and dreamlike and the power of sex explored unconventionally.

Stranger by the Lake is perhaps less of a head-scratcher than some of Guiraudie’s earlier work, in that there is no ambiguity about the characters’ location or identity. Yet it shimmers with that intoxicating sun-on-the-water allure that might make someone not quite themselves.

A large part of the film’s effectiveness is down to its roster of self-imposed formal limitations, which concentrate the attention into a kind of conceptual and narrative tunnel vision. It uses only exterior shots, only natural light and only a handful of locations, all in the immediate vicinity of the lake. It features only men. It includes almost no close-ups or music, relying on compositions incorporating the natural environment and sound design foregrounding wind and waves. It takes place over ten days, almost all of them marked by an establishing shot of the car park used by the lake’s visitors; these shots, like others repeated as the days pass, take on a weird double valence as the story continues, suggestive both of a ticking clock and a Groundhog Day-style stasis.

At first the film’s hermetic quality helps set the terms of a special zone to which we must acclimatise ourselves – one with its own norms of nudity, sociability, jealousy and discretion. As if learning a language, we find total submersion conducive to quick learning.

Later, this hermetic quality becomes more claustrophobic. Even early on, there are rumours of peril – a killer in the area, a beastie in the lake – but once we have seen Pascal’s death and Franck’s decision to abet rather than report Michel, the film’s formal restraint enhances the sense of psychological closing-in that falls over the action. The arrival of the police inspector, for instance, signals a definite change in the quality of the environment – a chilling effect, despite his ostensibly unprepossessing demeanour – but there is no question that he is a visitor on alien turf.

The sense of tunnel vision is also apt for a story whose main character pretty much thinks with his dick – or is at least in the throes of infatuation. Gay sexuality, so often present in Guiraudie’s work in intriguingly incidental ways, here becomes an all-encompassing milieu. The male bodies on display offer a range of types, some more conventionally appealing than others, and sexual encounters are a running background reality; those seen up close are few in number but explicit (body doubles were used). An initial frisson of titillation soon gives way to normalisation – there’s neither sensationalism nor judgement here, just an observed choreography of glances, movements and negotiated engagements.

The combination of sex and death in a gay context inevitably hints at Aids, and Franck and Michel’s decision not to use condoms could be construed as risky business, perhaps akin to the former’s dalliance with the latter once he has seen him kill – but a character who does insist on condoms for oral sex is made a bit absurd. If anything, emotional connection is seen to be the more important factor: the moments when we feel Franck is really playing with fire are those in which he presses Michel towards a more intimate relationship; conversely, Franck’s social neglect of Henri sets more alarm bells ringing than his pursuit of sexual pleasure. Unlike in, say, Cruising, there’s no sustained implication here of a death wish inherent in the urge to fuck another man.

Rather, the film’s key moment, Franck’s original sin, is one of voyeurism: he watches from a distance, in the near-dark, as a murder plays out amid the light on the water and he does nothing to intervene. It’s an extraordinary incident, shown in a single long take as we, next to Franck, watch two men’s apparent play turning into a struggle during which one of them is held under for too long. Then, as the victim conspicuously fails to resurface, we see the killer swim back to shore, emerge on to the beach, get dressed and walk towards and eventually past us, ultimately unchallenged. It’s the establishment of a complicity that can’t end well.

But perhaps the willingness, even the desire to succumb to the mad spectacle – to find oneself agreeing to abdicate agency and identity, to make excuses for a charismatic killer, to find a kind of pleasurable release in giving free rein to unconscionable impulses – isn’t so very alien. It’s a version, after all, of what we do when we take our seats in the cinema, waiting to be dazzled. 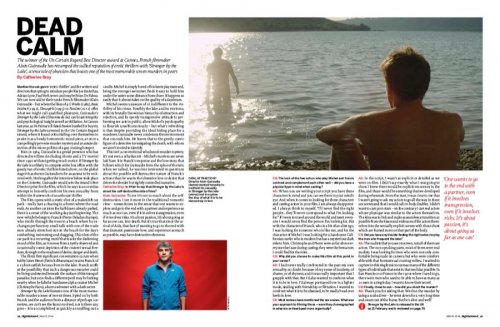 Read more from this issue