Jim Jarmusch talks vampires, culture and Only Lovers Left Alive, plus Wes Anderson on The Grand Budapest Hotel, Alain Guiraudie on The Stranger by the Lake, Claire Denis on Bastards, Lars von Trier’s Nymph()maniac and the many faces of Derek Jarman. In print and digital from 7 February. 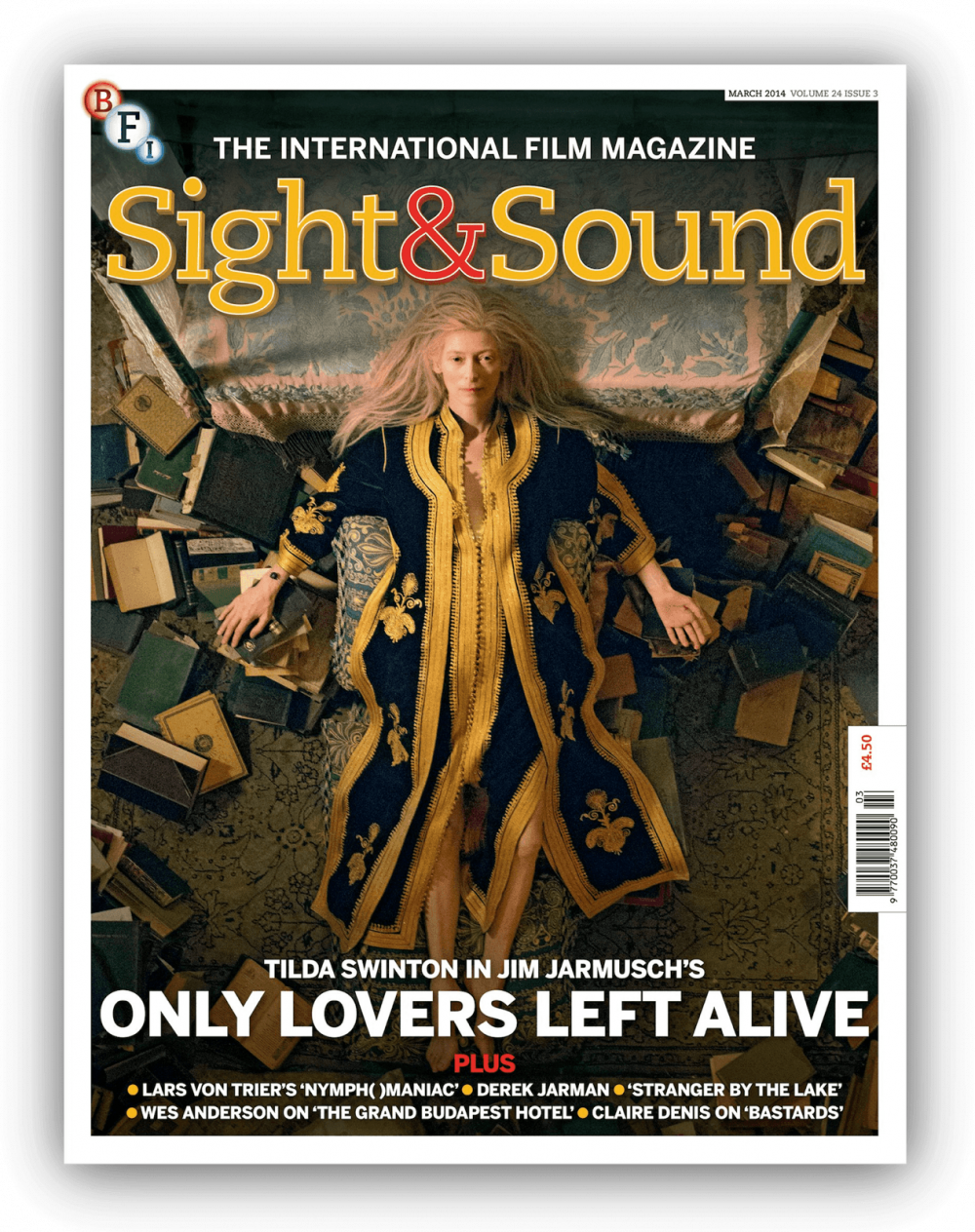 This month’s issue catches up with the king of American indie cool himself, Jim Jarmusch, whose remarkable new film Only Lovers Left Alive, starring Tom Hiddleston and Tilda Swinton, sees him tackle the vampire genre as he only he could do.

Nick Pinkerton caught up with Jarmusch for a long conversation in a New York diner, at which the epitome of the hip culture vulture pondered how great it would be to be an eternal vampire and have all that time to read every book ever written, listen to every great record ever made, see all the films we can never hope to squeeze into a human lifetime and travel the world. They also find time to talk about Nicholas Ray, Ernst Lubitsch, Tangiers, Christopher Marlowe and whether or not a certain William Shakespeare was all he’s been claimed.

Another figure whose cultural interests and influences extended far beyond the cinema was Derek Jarman, who died 20 years ago this year. Part punk prophet, part-English traditionalist, Jarman was a man whose occult interests sat side by side with an earthy political engagement. William Fowler reappraises his legacy.

If Jarman was someone who very clearly engaged with political and social events of his time, Wes Anderson has always seemed to prefer the perfection of his own, impeccably crafted fantasy worlds. His latest film, The Grand Budapest Hotel, bears the distinct influence of Lubitsch. He talks to Isabel Stevens.

If Anderson is channelling Lubitsch, Lars von Trier’s epic and characteristically controversial Nymph()maniac channels the Marquis de Sade in a complex odyssey of sexual desire. But is its central character any more than an empty vessel for the director to offload his often provocative ideas about women, asks Nick James?

Our final two features also concern films that deal with the darker edges of behaviour. Claire Denis’s latest film, Bastards, is a harrowing journey into the heart of darkness, loosely inspired by William Faulkner’s Sanctuary. She talks to Nick Roddick.

Ted Kotcheff’s cult 1970s classic Wake in Fright meanwhile is a brutal exploration of masculinity and violence in the Australian outback that has at last been restored and revived. He talks to Clare Stewart about bringing it back for a new generation.

Also in this month: Bob Mastrangelo’s obituaries round-up of the film greats and lesser-knowns who left us during 2013, Kim Newman on Al Pacino in Sidney Lumet’s great cop film Serpico, Melissa Gronlund on the beguiling installation work of Turner Prize-winner Laure Prouvost, reports from the Sundance and Rotterdam festivals, Olaf Möller on the Spanish filmmaker Gonzalo García Pelayo, John Wyver on a history of British television – and much more besides…

As a director who has often embraced elements of genre cinema, from westerns and prison-break films to samurai and hitmen, it was perhaps only a matter of time before he turned his attention to vampires. Here, he explains  his unconventional take on the subject in Only Lovers Left Alive, a darkly comic tale of enduring love among the undead, and why he was determined to drive a stake through viewers’ expectations. Interview by Nick Pinkerton.

Lars von Trier’s hugely inventive two-part Nymph()maniac sees him channelling the Marquis de Sade in a complex, absurd and often very funny odyssey of sexual desire. But is its central character any more than an empty vessel for the director to offload his often provocative ideas about women? By Nick James.

The spirit of Ernst Lubitsch lives on in Wes Anderson’s fast-quipping screwball caper The Grand Budapest Hotel, a chase extravaganza set over several decades in a fictional Eastern European country. Here, the director talks about the writing process, how he maintained the plot’s frantic pace and why sadness and tragedy haunt the film’s atmosphere. By Isabel Stevens.

Intruder in the dust

Ted Kotcheff’s cult classic ‘Wake in Fright’ is a brutal exploration of masculinity and violence in the Australian outback. Here, the director explains why it took a seven-year search for the missing negative to bring it back for a new generation. By Clare Stewart.

Part punk prophet, part English traditionalist, Jarman was a man whose occult interests sat side by side with an earthy political engagement. Twenty years after his death, it’s time to reappraise the legacy of an enigmatic artist, filmmaker, designer, activist and dreamer. By William Fowler.

At once elliptical and confrontational, Claire Denis’s films have often proved challenging viewing. With her latest, Bastards, a harrowing drama about a man returning to comfort his sister after the suicide of her husband, she travels even deeper into the heart of darkness. By Nick Roddick.

Bob Mastrangelo’s survey of the film greats and lesser-knowns who left us during 2013, including Peter O’Toole, Les Blank, Joan Fontaine, Kay Mander and Alexei German.

Actors and the indie deluge.

In the frame: The man with the Midas touch

Look beyond the commercial success of his films and you’ll find a director of true artistic merit in Feng Xiaogang. By Simon Fowler.

The motor scooter came to represent working class dreams of escape in the years after World War II. By Hannah McGill.

Every now and then a film poster campaign turns bus shelters into sites of contestation. Is there really no such thing as bad publicity? By Ashley Clark.

First sight: How he felt

Director and star Terence Nance explains how An Oversimplification of Her Beauty grew out of a  single brief phone-call in 2006. By Sam Davies.

Dispatches: Seeing the wood for the trees

The process of filmmaking involves a number of steps, and sometimes a lot of them are stumbles. By Mark Cousins.

It took years of creative writing courses and a lot of professional advice for  Jonathan Asser to get recognised as a newcomer. By Charles Gant.

British film has plenty of homegrown creative talent and ideas but what it needs are some bold investors. By Ben Roberts.

While other British film producers steer clear of comedy, Nira Park of Big Talk is laughing all the way to the bank. By Geoffrey Macnab.

Word on the wire: Film classification

Trying to fathom the reasoning behind the BBFC’s guidelines may lead to strong language, mild fantasy violence and threat. By Justin Johnson.

Sundance: Around the world in 11 days

The indie magnet might be famous for its US-focused fare but this year’s best films had a truly international flavour. By Eric Kohn.

Rotterdam: The future is unwritten

Despite its successes, the festival needs to address the challenges posed by reduced budgets and dwindling industry influence. By Edward Lawrenson.

Still undervalued even at home, the films of Gonzalo García Pelayo offer a suitably complex portrait of Spain under and after Franco. By Olaf Möller.

Derek Jarman’s early shorts set the template for a filmmaker who collated great music without seeming to care too much about it. By Daniel Barrow.

With her installation-based video work, Turner Prize-winner Laure Prouvost aims less to depict than to convince, or even beguile. By Melissa Gronlund.

A turning point in American cinema’s portrayal of the police, Serpico shows its cop hero battling corruption within the ranks. By Kim Newman.

Gavin Millar’s film, written by Dennis Potter, offers an entrancing look at Lewis Carroll through the eyes of the elderly Alice. By Philip Horne.

John Wyver on a fascinating social history of British television.

Paul Julian Smith on a study of the golden age  of Mexican cinema.

The finale of Claire Denis’s story of jealousy and repressed desire in the French Foreign Legion is a dance between life and death. By Pasquale Iannone.