Film of the week: Gone Girl

David Fincher and screenwriter Gillian Flynn riddle the mysteries of marriage in an entertainingly perverse adaptation of the latter’s blockbuster novel.

from our forthcoming November 2014 issue 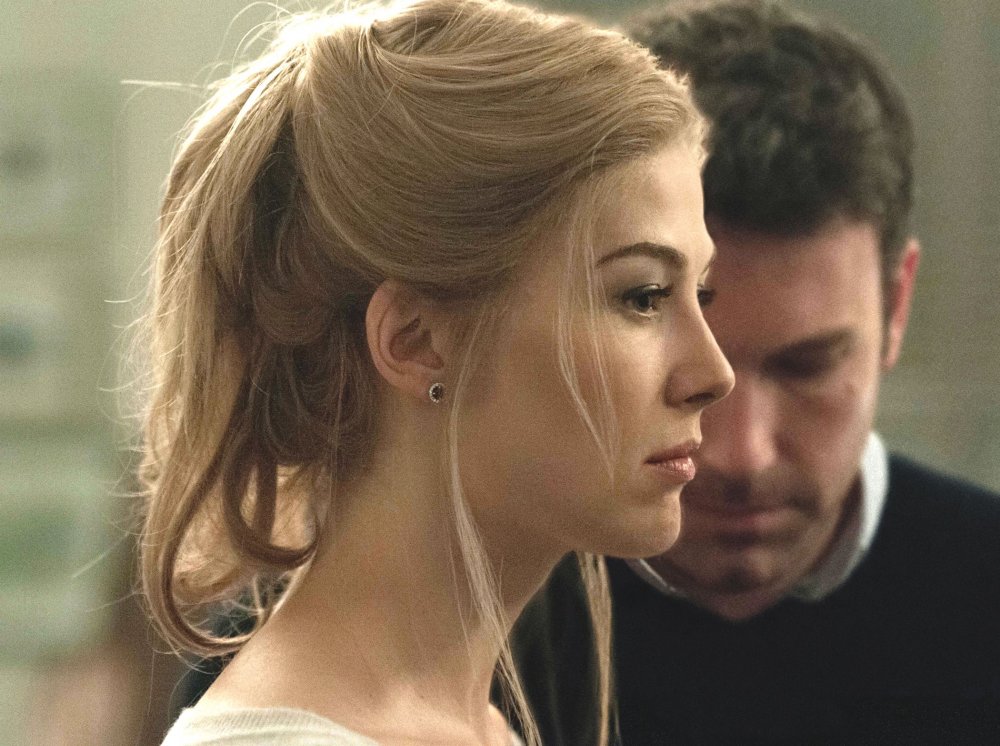 Ever more reliant on pre-existing texts but ever more fearful of marketing difficulty, films in Hollywood’s shrinking middle-budget arena must feed on what we used to call the airport novel.

Gillian Flynn’s huge bestseller Gone Girl is a meticulously wrought page-turner of breathless forward momentum structured around the opening moment when its female lead, Amy Elliott Dunne, vanishes from her husband Nick Dunne’s life, seemingly dead or abducted. In the book’s first part, flashbacks from Amy’s vivid diary alternate with Nick’s present experience of growing police suspicion and media frenzy. David Fincher’s film borrows much of that structure but what makes the novel a better prospect for adaptation than the average bestseller is the peculiarly hard-to-nail characters it constructs.

Amy and Nick were journalists in New York who met at a party in Dumbo, Brooklyn, and found their ‘better selves’ through each other (Flynn was herself a journalist, so she knows the background). As a young girl, New York sophisticate Amy had been the inspiration for a series of children’s books – ‘Amazing Amy’ – that made her self-satisfied parents’ careers but left her failing to keep up with her fictional counterpart. By contrast, Nick came to the city from backwater Missouri and made good. However, the crash of 2008 saw them both made redundant, and they had to move to Nick’s hometown, with him owning a bar with his sister Margo and Amy staying home and occasionally bristling at her fate.

For the movie, of course, that’s all mostly backstory – even if it touches on the real fate of dozens of journos. From the rapid montage of pristine suburban street furniture with which Fincher establishes an airless mood onwards, what matters first is that Nick is the prime suspect in his wife’s disappearance and possible murder. Since it’s the film’s purpose to bedazzle you with its many charmingly intricate volte-faces and interlaced clues, I will try here not give plot detail, but you may want to wait and read this after you’ve seen the film. 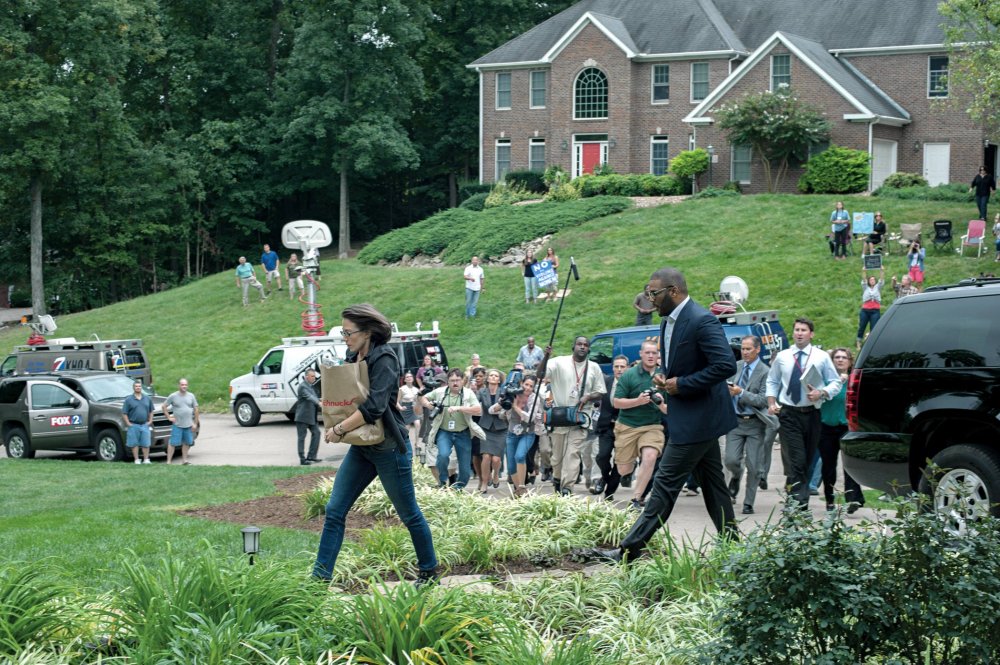 Amy’s disappearance happens on Nick’s birthday, and a treasure hunt she’s laid out for him, as she does every year, only leads him deeper into the mire of suspicion. The media circus too – portrayed with flair by a combination of poisonous female TV presenters and a lawn-based paparazzi chorus line – wants to make him a nationally hated figure, much like the real-life convicted killer Scott Peterson, whose wife disappeared in 2002 and whose suspicious behaviour afterwards makes his case a blueprint of sorts for this film. The police – represented mostly by the seemingly sympathetic but hardnosed Detective Rhonda Boney (Kim Dickens) – know that something happened in the house, because there’s evidence of struggle, blood loss and a clean-up. Nick, his basic honesty compromised by vanity, seems unable to stop digging himself deeper into trouble by keeping details from them.

But Fincher doesn’t merely want to keep you guessing who-done-what, he also wants to keep Nick and Amy ambiguous for as long as possible – and even to throw doubt on the nature of identity itself. He’s a master of what I want to call pop perversity. He likes to create a polished hyperreal world where inscrutable, ordinary-looking people have the darkest potential. Gone Girl moves along with a dazzling visual dexterity that’s more than a match for the novel’s own velocity, but with the amplification that every scene seems charged with the energy of potential psychological dysfunction – a rather Hitchcockian mode.

Since Fincher’s films are always free of visual distraction, the task of bringing off the mood of constant doubt falls heavily on the actors. Fincher likes tamped-down performances, so it’s helpful for Ben Affleck that his Nick is caught on camera smiling next to a ‘missing’ poster and afterwards becomes someone terrified of using the wrong facial expression. Despite his muscular physical presence, Affleck must use minimal gestures – a tilt of the head, raised finger or, of course, narrowed eyes – to convey someone cocky, confused and calculating. He does this very well. 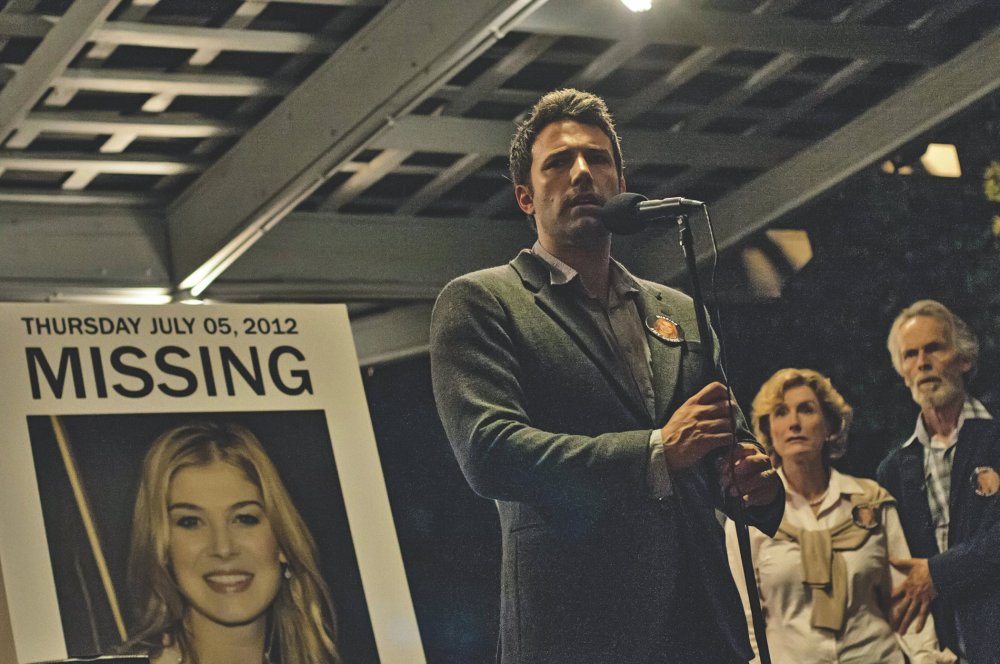 Nonetheless the film is stolen by Rosamund Pike, whose Amy positively glows with white-hot preciosity and must do because her facial movements are rare and seem timed to perfection to unsettle. Without giving too much away, it’s worth noting too Neil Patrick Harris’s understated portrayal of Desi Collings, a creepy, rich mama’s boy and onetime pursuer of Amy who turns up at the search centre, Tyler Perry’s slick lawyer Tanner Bolt, who advises Nick on his media appearances by flicking jelly sweets at him when he gets things wrong, and Carrie Coon as Nick’s sane, stalwart rock of a sister Margo, who provides the tears others won’t shed.

Unusually, Flynn the novelist is also the screenwriter. She has handled the necessarily ruthless reduction of material with wit and sharpness. Though she works in a mainstream style, and is more interested in keeping you gripped than in allowing her themes to resonate, she creates as interesting a critique of modern marriage as, say, Richard Yates’s Revolutionary Road did for the 1950s variety. Her pitch is that the personas we adopt to attract one another are false and get dropped in the process of a long relationship. In one scene, she and Fincher have Amy rail against the ‘cool girl’ that all men want, who is “hot and understanding” and “never gets angry” –  a broader version of the ‘manic pixie dream girl’ stereotype of much recent complaint. You can also see Amy’s approach to marriage as being an extreme version of The Rules.

That Gone Girl, in the interests of narrative satisfaction, lets go of these intriguing ideas fairly quickly is understandable, but it’s a risky business keeping so many character uncertainties in the air. At times the characters feel as insubstantial as ghosts and the narrative threatens glibness but it doesn’t matter much because the pleasure of Flynn’s narrative is just how outlandish it becomes, ending in wild transgressive territory that Pedro Almodóvar might envy. I had a great time watching it. 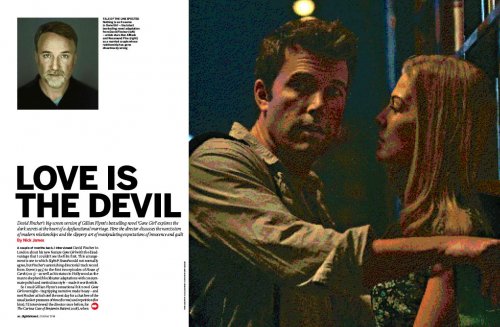 David Fincher talks to Nick James about adapting Gillian Flynn’s bestselling novel Gone Girl, the narcissism of modern relationships and the slippery art of manipulating expectations of innocence and guilt.

Cover story: Love is the devil

David Fincher’s big-screen version of Gillian Flynn’s bestselling novel Gone Girl explores the dark secrets at the heart of a dysfunctional marriage. Here the director discusses the narcissism of modern relationships and the slippery art of manipulating expectations of innnocence and guilt. By Nick James.

Related to Film of the week: Gone Girl