Film of the week: Much Ado About Nothing 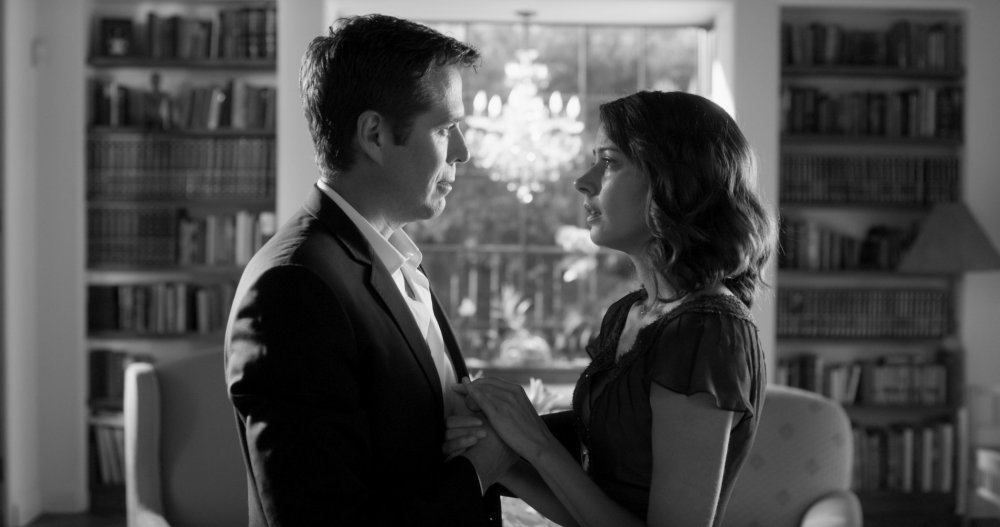 Shakespeare in love: Alexis Denisof and Amy Acker as Benedick and Beatrice in Joss Whedon’s modern-day Much Ado About Nothing

“Man is a giddy thing,” proclaims Much Ado About Nothing’s hero Benedick as he prepares to get married – revoking his previous vehement oaths to the contrary – and so is Joss Whedon’s film version of the play. Both the physical and verbal movement of the adaptation turn on the proverbial dime, as Whedon’s repertory company of players from previous endeavours bring a joyful swiftness to this midsummer night’s tale of the trials of true love. Amid the barbed banter of Shakespeare’s play – where one set of lovers spend four-and-a-half acts insulting each other, and the other set get engaged after barely exchanging a word and then halt the marriage at the altar over charges of infidelity – Whedon crafts a fluent, contemporary story in which the pen is proved to be truly mightier than the sword, as dark plots are foiled not by duels but by poetic duets.

Strong female characters are as much a Whedon hallmark as vibrant, idiosyncratic banter, and the film brings out the play’s battle of the sexes as the macho incomers, returning victorious from war, arrive at Leonato’s home and intrude on its peaceful domesticity. Beatrice’s cousin Hero, daughter and angel of the house, is a difficult part to modernise given her extreme modesty, silence and forbearance; through the interactions between Hero and her maids Margaret and Ursula as they tease and tidy, however, Whedon creates a strong sense of a utopian space that opposes the shady battlefield from which the men have come. Paradigmatic is the slowburning joke of realising that Beatrice has put up Benedick and his comrade Claudio in a children’s bedroom, complete with single beds and stacks of cuddly toys.

As clear and light as a California wine, Shakespeare’s most sparkling dialogue meets its match in Whedon, whose immortal Buffy the Vampire Slayer catchphrase – “Love makes you do the wacky” – could serve as the film’s strapline. Much Ado gives us grown women and men literally falling over themselves and each other as they fall in love, reinventing screwball comedy even as it locates the genre’s origins in the Bard. The relationship between Benedick and his band of commitment-phobic brothers-at-arms may even be the original bromance – but when Benedick plays the swashbuckling hero, it’s Beatrice who buckles his swash.

The open plan of Leonato’s large and airy Spanish-style house allows for further visual twists and physical play to prevent the staginess that often attends Shakespeare films. The coherent pro-filmic space is another Whedonism: the eponymous spaceship in Serenity (2005) was built as a walk-through model rather than separate sets, and that spatial integration pays off here too. DP Jay Hunter’s camera floats like a butterfly through doorways and windows, stinging as it catches characters in moments of eavesdropping-inspired stunned epiphany.

As clear and light as a California wine, Shakespeare’s most sparkling dialogue meets its match in Whedon

Plots and jokes are mobile, bouncing across rooms and up stairs – none more so than when Beatrice, overhearing a staged conversation designed to make her think that Benedick is in love with her, pratfalls down the basement steps. Graceless in the way that only a supremely graceful performer can be, Amy Acker gives the film’s show-stopping performance as Beatrice, unfolding her elegant lines with the same skill with which she folds herself under a kitchen counter to eavesdrop in awkward delight. Neither shrew nor spinster, it is she, and not Hero, who is the spirit of her uncle’s house.

A veteran of Whedon’s television ventures Angel and Dollhouse, in both of which she played a lovelorn scientist, Acker combines the affective and embodied intelligence of the classic comedienne, a skill and style underappreciated to the point of absence in contemporary cinema. Marilyn Monroe, comedienne par excellence, once wrote to Laurence Olivier noting that his final cut of The Prince and the Showgirl completely disdained her superior cinematic intelligence: “The pacing has been slowed and one comic point after another has been flattened out by substituting inferior takes.”

Much Ado could have been a similarly disastrous meeting of American pop culture and British high culture. But unlike Olivier, Whedon respects both modes equally, and grounds the film in trusting his performers – witness Tom Lenk’s scene-stealing false moustache, which sets up a clever parody of detective dramas. That noir is romcom’s flipside was also part of the premise of Dollhouse, which was set in LA and meshed boy-meets-girl with undercover operations. Here, the usually incomprehensible and unfunny scenes involving the malapropic Constable Dogberry and his incompetent deputy Verges are put to good use to pastiche the clichés of the police procedural (CCTV, guns, desk punching) as their storyline intersects with Don John’s plot to convince Claudio that his betrothed, Hero, is unfaithful. Canted angles, long shadows, California languor and the casting of Conrad as a femme fatale all give John’s scenes a deliberate Double Indemnity-cum-Kalifornia spin, so that Claudio’s spurning of Hero and her subsequent deathlike faint have all the seriousness – and seediness – of a noir crime. 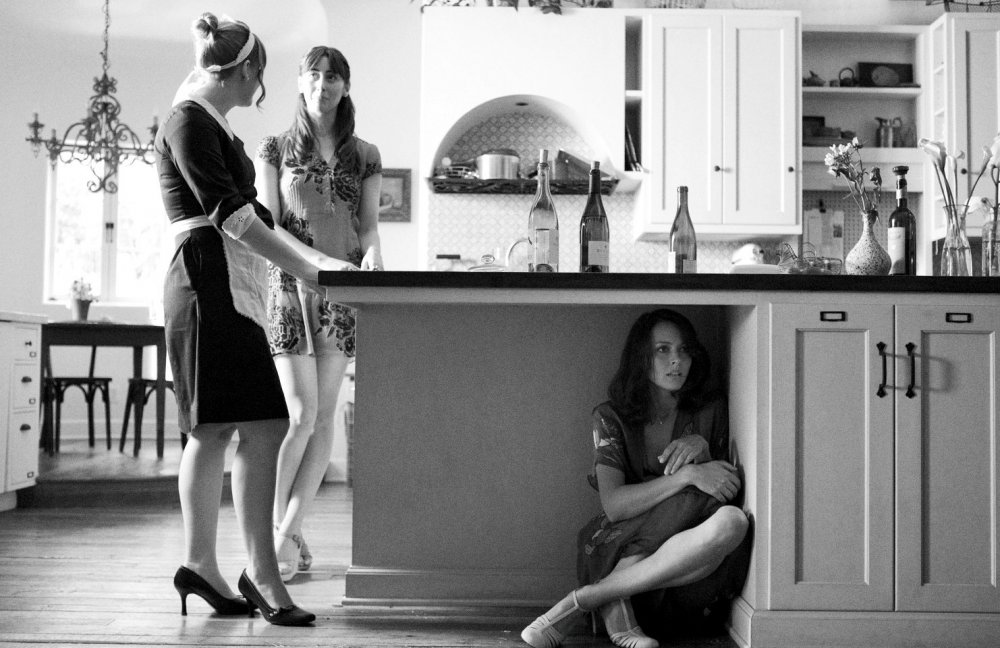 Where high-school Shakespeare tends to translate the plays’ concerns about sexuality into a lighter register, suggesting that such ideas are outmoded among contemporary teens, Whedon’s Much Ado shows up the continuing survival of the double standard, revealing Claudio to be a callow, thoughtless boy (a point underlined by the film’s staging of his racist comment during the second wedding) and Leonato and Pedro hopelessly patriarchal. To do this, the film commits to, rather than fudges, the play’s unlikely twists and turns: the delicate musical sequence of the funeral procession and the elegant simplicity of the veiled women representing multiple Heroes in the second wedding are cinematic solutions to problematic stage moments. Through their fluid incorporation into the cinematic narrative, they suggest that Shakespeare created these coincidences and collusions to highlight the gender bind, and to argue for a form of true marriage that would undo it.

Kenneth Branagh’s 1993 film version posited an awkward ending, in which Don Pedro is left alone, preoccupied with hunting down his bad brother Don John, and exhorted to “get thee a wife” by Benedick. Queer theorists have suggested that Pedro, like Antonio in Twelfth Night, can be read as gay, and thus surplus to heteronormative closure. Whedon, a vocal supporter of the repeal of Proposition 8, which delegalised same-sex marriage in California, offers a different reading. At the final party, the camera cranes up to offer an overhead shot of a dancing ensemble, followed by a shot of Pedro letting his hair down among the crowd, dancing wackily with Margaret: not for love, but for fun. At the welcoming party at the beginning of the film, everyone went masked (including Pedro disguised as Claudio) and the entertainment was arch – jazz singers and trapeze artists. But for the closing party all masks have been shed, and all pretensions let go.

In this vision, marriage is the opposite not of singledom but of melancholy, an emotional state of alienation with which all the male characters identify at one point or another, while Beatrice says that she is single but “merry”. Melancholy and military, the men are emotionally immature and unable to reintegrate into society; to love and marry is not to become part of a system, but rather to be part of the peaceful community the house symbolises, and to which the film is an extended love letter. That the house was planned, and the film produced, by Whedon’s wife Kai Cole makes Benedick’s giddy exhortation all the more tender. That bromantic fear of commitment is the real much ado about nothing, argues the film; giving up arms for love, the tie that binds, is the real song and dance.