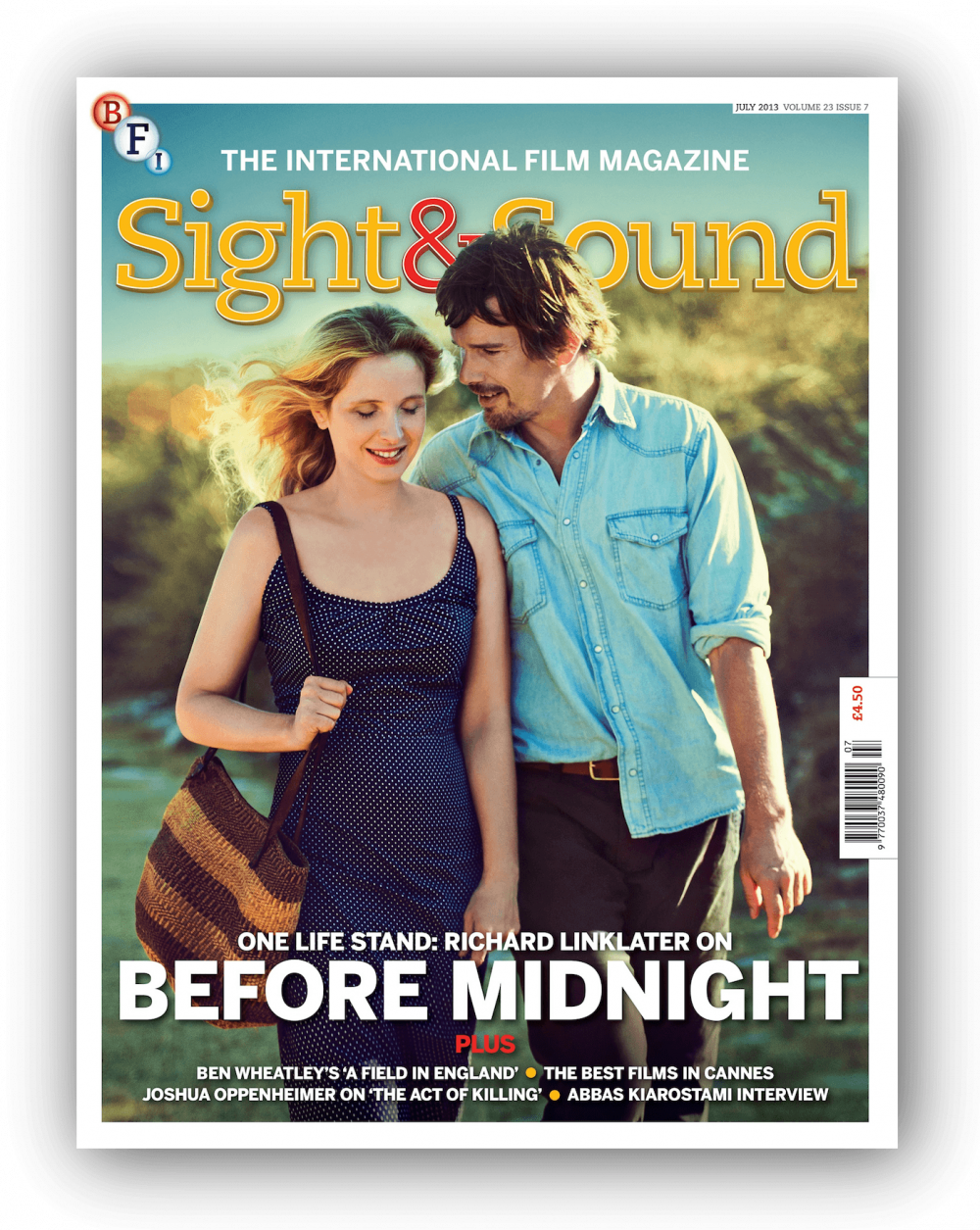 Nearly 20 years since we first met them as fresh-faced young backpackers in Richard Linklater’s Before Sunrise, and nine since its sequel Before Sunset, Ethan Hawke and Julie Delpy once again play Jesse and Celine in Linklater’s wonderful latest film Before Midnight, our cover story this month. Linklater’s Before… films have become something like a fictional version of the 7 Up! TV documentaries, as we check in again on these characters to see how their lives have changed along the bumpy road of life. Philip Horne talks to Linklater about the film and whether this latest film marks the end of our window into Celine and Jesse’s relationship, or whether we might yet meet them again, sometime in the future…

Another director who has probed the mysteries of human relationships is the great Iranian auteur Abbas Kiarostami, whose Japan-set latest film Like Someone in Love is as rich in ambiguity and as demanding of his audience as ever. He talks to Geoff Andrew about how he felt at home working in Japan, and about the autobiographical aspects that run throughout the film.

The blending of fictional and non-fictional aspects that marks Kiarostami’s work is also something characteristic of the films of Austrian director Ulrich Seidl; but where Kiarostami’s work is usually meditative and languorous, Seidl’s aesthetic is famously and unabashedly confrontational. His latest project is his most ambitious yet: the Paradise trilogy of films in which three linked heroines search for different forms of salvation, through Faith, Love and Hope. “The stories I’m telling should hold up a mirror to our society”, Seidl tells Richard Porton.

The line between fiction and documentary is also blurred in Joshua Oppenheimer’s unorthodox film The Act of Killing, in which the perpetrators of the massacres of millions of alleged communists in mid-1960s Indonesia re-enact their crimes for the camera. Oppenheimer tells to Nick Bradshaw about the extraordinary circumstances of the film’s production, and how the killers needed remarkably little persuasion to take part in the film.

British cinema might often get stereotyped as a predictable world of kitchen-sink realism and crime capers, but Ben Wheatley’s latest feature A Field in England – an unclassifiable tale set in the 17th century during the Civil War – comes from another place entirely. Kim Newman explores the ways in which Wheatley taps into the rich and varied tradition of British cinema that draws from the mysteries, magic and dark forces of the old Albion.

Of course, if it’s early summer it also means the Cannes Film Festival, and this year’s edition was one of the strongest in recent memory, with new films from the Coens, Claire Denis, Paolo Sorrentino, Clio Barnard and many, many more. Our July issue includes our full report on the highs and lows of the festival, from Abdellatif Kechiche’s Palme d’Or-winning Blue is the Warmest Colour, to Nicolas Winding Refn’s disappointing (for most) Only God Forgives.

All this and our comprehensive reviews pages to boot, which cover the latest books and DVD releases, as well as every theatrical release, including in-depth analyses of Steven Soderbergh’s Behind the Candelabra, Sofia Coppola’s The Bling Ring, Baz Luhrmann’s The Great Gatsby and Joss Whedon’s take on Shakespeare’s Much Ado About Nothing. Enjoy!

Reuniting Celine and Jesse after their tantalising encounters in Before Sunrise and Before Sunset, Before Midnight completes a unique portrait of a relationship. Or will they be back, wonders director Richard Linklater? By Philip Horne

In Joshua Oppenheimer’s The Act of Killing, the perpetrators of the massacres of millions of alleged communists in mid-1960s Indonesia re-enact their crimes – with extraordinary results. By Nick Bradshaw.

Despite the sensationalist potential of its Tokyo vice setting, Abbas Kiarostami’s new film Like Someone in Love proves as rich in ambiguity and as demanding of its audience as the director’s great Iranian works. By Geoff Andrew.

From the economics of the sex trade to portraits of overcommitted pet owners, the films of Austrian director Ulrich Seidl have always divided viewers. His new Paradise trilogy – in which three linked heroines search for different forms of salvation – is no exception. By Richard Porton.

Set in the 17th century during the Civil War, A Field in England – director Ben Wheatley’s follow-up to Kill List and Sightseers – belongs to a rich and varied tradition in British cinema of films that tap into the mysteries, magic and dark forces of our countryside. By Kim Newman.

At one of the strongest festivals in recent memory, the yawning gulf between rich and poor provided a quality seam for filmmakers to mine. But there was intimacy too alongside the satire and the social commentary, not least in Abdellatif Kechiche’s deserving prizewinner. By Nick James.

The director of The Selfish Giant, which won the prize for the best film in Directors’ Fortnight, on what a Cannes success feels like.

This year’s festival saw films from France and the Far East stealing the thunder of higher-profile American entries. By Kieron Corless.

The Great Gatsby wasn’t the only film in Cannes this year to present a wry angle on America’s not so distant past. By Geoff Andrew.

Editorial: Any size that fits.

After a period of flux, the Edinburgh International Film Festival is back in rude health under the direction of Chris Fujiwara, with a host of international treats on offer, reports Pasquale Iannone.

Object Lesson: the humble pillowcase might not look much at first but becomes an icon of cinematic unpleasantness once a couple of eyeholes are added.

The creatures brought to life by the late Ray Harryhausen helped define the art of visual effects in the years before the advent of CGI. Michael Brooke selects his five best creations.

First Sight: Gilles Bourdos’s Renoir tells the story of the young female muse who inspired both the painter Pierre-Auguste and his son Jean. He talks to Samuel Wigley.

Dispatches: after 18 years at Cannes on the wrong side of the security barriers, Mark Cousins was finally granted insider status this year – for a few hours at least.

Development Tale: Summer in February, a 1995 novel about Edwardian artists in Cornwall has just reached the screen, courtesy of two former pupils of its writer Jonathan Smith. Charles Gant reports.

The Numbers: Charles Gant on an unusual new release strategy for Ben Wheatley’s A Field in England.

Brewster: We know these are hard times for distributors of specialised film in the UK and we’re looking to see what we can do to support them, says Ben Roberts.

The prospect that European films could lose their cultural exemption from rules governing free trade with the US has prompted a storm of protest, reports Geoffrey Macnab.

A revelatory strand at Oberhausen offered multiple perspectives on the unbearable flatness of being in an age of digital alienation, reports John Beagles.

Despite the suspension of film production in Portugal for the past year, Indie Lisboa offered plenty of intriguing domestic projects, finds Kieron Corless.

The Act of Killing
Before Midnight
Bula Quo!
The Call
Chasing Mavericks
The East
Epic
Fast & Furious 6
A Field in England
The Hangover Part III
I Am Breathing
I Am Nasrine
I Want Your Love
Like Someone in Love
The Moth Diaries
Out in the Dark/Alata
Pain & Gain
Paradise: Faith/Paradies Glaube
Paradise: Love/Paradies Liebe
Renoir
The Seasoning House
Shun Li and the Poet/Io sono Li
Stand Up Guys
Star Trek Into Darkness
Stories We Tell
Stuck in Love
Summer in February
This Is the End
Tropicália
The Wall/Die Wand
The Words
009 Re:Cyborg

The newly discovered films of one-time Tati gag-man Pierre Etaix show him to be a comic master in his own right, says Jonathan Romney.

Revival: Yamanaka Sadao’s directorial career lasted only six years but had a lasting influence on the filmmakers who followed. By Philip Kemp.

An apparently random shot at the end of Rossellini’s 1953 film Journey to Italy encapsulates the director’s egalitarian vision.