Film of the week: The Great Gatsby

Jay Gatsby is an outsized part that requires a movie star, in the classical, Valentino sense. Scott Fitzgerald laid down a big drumroll build-up before his title character, the mysterious host of West Egg’s maddest parties, finally appeared in his novel. This is nothing, however, compared to the ballyhoo in Baz Luhrmann’s film before he finally whips the tarp off Gatsby. He appears, and it’s Leonardo DiCaprio, as we knew it would be and as it seems it must be, and ‘Rhapsody in Blue’ plays and fireworks burst, and it’s all very silly and suddenly touching when DiCaprio smiles. Like much in Luhrmann’s Great Gatsby, like Gatsby, the reveal is too much, and more than a little moving in its excess.

“It understood you just as far as you wanted to be understood, believed in you as you would like to believe in yourself,” narrator Nick Carraway says of Gatsby’s smile in Fitzgerald’s text – a quote that appears verbatim in the film, along with many others. Which is not to say that the novel is scrupulously followed in every detail. In one of the innovations of Luhrmann and long-time collaborator Craig Pearce’s screenplay, Tobey Maguire’s Carraway is introduced recovering at a sanatorium, far away from the New York scene and the riotous summer that wrecked his nerves.

This little addition does not, I think, add much to our understanding of Carraway, and has the odour of I Am the Cheese and English-class discussions of ‘is Holden Caulfield writing from an asylum?’ about it. For many, it will be enough to prove that lurid Luhrmann has made a hash of one of the finest novels written in the United States. It takes $100 million to make an accident! Did Pat Hobby write this script? O, huge incoherent failure!

But I keep going back to DiCaprio’s Jay Gatsby. Gatsby, the poor boy who fell in love with a rich girl named Daisy, and who, to curry her favour, reinvented himself as a gentleman – in the memorable formulation of H.L. Mencken, “a young man with a great deal of mysterious money, the tastes of a movie actor and, under it all, the simple sentimentality of a somewhat sclerotic fat woman”.

Leonardo DiCaprio became very rich by playing a star-crossed lover in Luhrmann’s 1996 Romeo + Juliet and a poor boy in love with a rich girl in James Cameron’s 1997 Titanic. Cameron reported that he had clashed with DiCaprio over the rather straightforward romantic lead that he’d asked the actor to play, telling him: “I’m not going to make this guy brooding and neurotic and I’m not going to give him a hump and a tic and a twitch and a limp and all the other things that you want.”

The resulting performance granted DiCaprio phenomenal Tiger Beat popularity, and this was evidently an embarrassment to an actor who harboured aspirations to be a serious tragedian despite his pretty, untrammelled face. So DiCaprio used his newfound clout and spent most of the next 15 years locating projects in which he would be scourged and tormented, his features crumbled with angst until all hint of callow youth had been stamped out. Only Mickey Rourke was more thorough.

This is why that smile is so astonishing. DiCaprio has allowed himself to be radiant again here. It is a different kind of beauty now, for he is a long way from 22, and the residue of the past 15 years of ceaseless suffering remains on his face – so much the better. The self-invented Gatsby is a palimpsest; DiCaprio’s delicate, transparent performance allows us glimpses of the erased character. 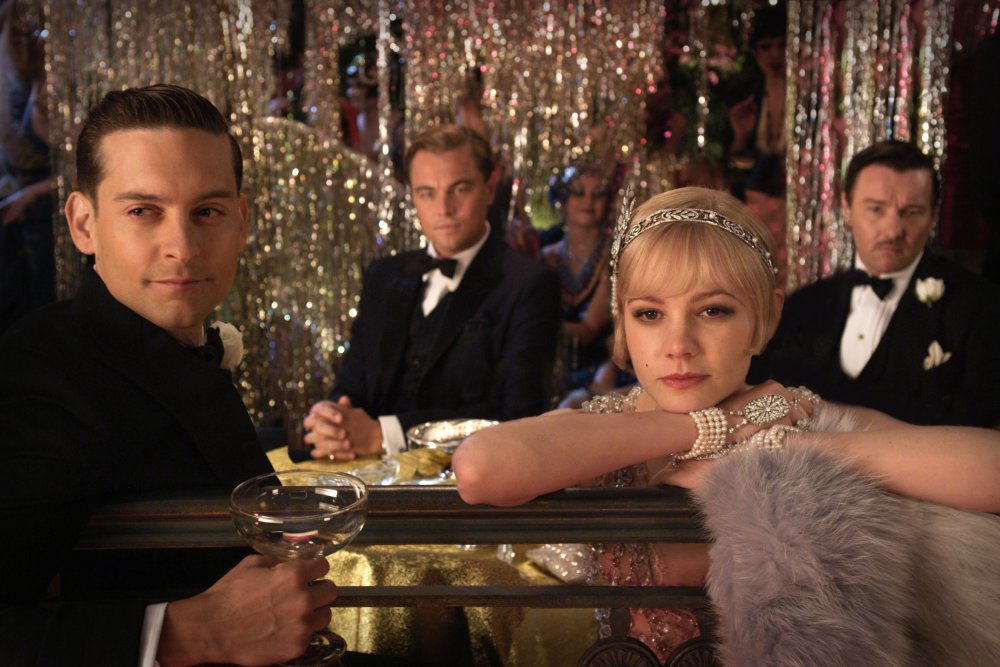 Gatsby’s fidgeting is a wavering between hopeful self-determination and self-doubt; for all his genius, Gatsby suspects that the chasm he has set his mind to leaping may be unbridgeable. This anxiety manifests in punctilious stiffness – those compulsive “old sports” – and beneath the blithe clubman veneer you can see a man stiflingly aware of the impression he is making, on guard. DiCaprio has never been finer, and only once does he really break in the style we’ve come to expect of him, a flare-up when challenged by the husband of his beloved Daisy, where he turns just as pink as the pinstripe suit he’s wearing.

Joel Edgerton plays Daisy’s brutish, to-the-manner-born husband Tom, freed from obligation to keep up appearances by his pedigree. It’s the only performance overshadowed by one in Jack Clayton’s etiolated 1974 Gatsby, which had Bruce Dern in the part. Carey Mulligan, Luhrmann’s Daisy, does well in drawing out the equivocation of the role – she shows an inkling of the glittering prize that Gatsby sees in her yet never gives too much away, for it is the cautious WASP credo of ‘spend the interest and don’t touch the principal’ that Daisy, on an emotional level, embodies.

Mulligan’s performance comes across, perhaps by necessity, more hazily than Elizabeth Debicki’s Jordan Baker, the book’s cheating golf pro and Nick’s occasional lady companion. With her slinky, bosomless frame, Debicki is as sleek as a deco ornament, and I would’ve welcomed more of both her and Indian superstar Amitabh Bachchan, who lends his grave suavity to the role of Jewish gambler Meyer Wolfsheim.

That bit of casting is more than a token outreach to the subcontinent market. Luhrmann’s conception of the Roaring 20s takes much from Bollywood, as well as from Studio 54 and ‘Big Pimpin’’ – any excess will do. Where Clayton’s Gatsby was an East Egg film, steeped in the limpid manners of the entrenched aristocracy, Luhrmann’s is a tacky, arriviste West Egg film of “spectroscopic gayety”. Luhrmann splurges in party scenes, which are a brocaded chaos of confetti, streamers, butterfly ceiling hangings, gushing champagne – here the 3D almost justifies the price-gouge, with Luhrmann layering manifold textures like Josef von Sternberg given carte blanche. 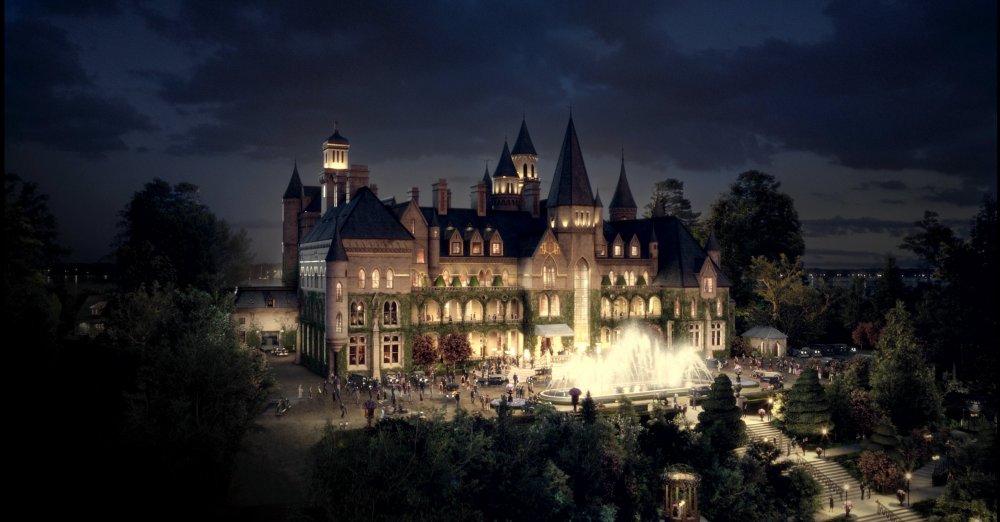 Gatsby’s West Egg home is spoken of as resembling a theme park or the World’s Fair. Its pointy turrets suggest the Magic Kingdom, its terraced gardens are almost confectionary. The property was acquired, as you may remember, for the view it provides of the Buchanan home in East Egg, and Luhrmann takes great pleasure in swooshing across aching distances, skimming over misty Manhasset Bay.

One of this Gatsby’s delights is the way it finds cinematic gestures befitting the book’s mythologised Greater New York geography, following the careening, suicidal to-and-fro voyages from a Manhattan of the imagination in Gatsby’s huge yellow land-yacht of a car. Resurrected through CG, nothing in this lost city is remotely plausible – but the weightlessness of pixel-based art is a boon here, for Fitzgerald’s idea of the period as a sort of mass-hallucination fits the way the actors swim through ethereal environments: a rooftop tea-garden or a Times Square dominated by a faceless Arrow Collar ad which takes on a mysterious import when reflected in a cab window. The uncanniness of this high-definition unreality crests early, in a moment when Carraway looks out of the suite where he is presently ensnared in a party – and looks down to see himself looking back up from the street.

“I was within and without,” says Carraway – and so too is Luhrmann’s movie inside and outside its period, its pastiche 1920s fed through the filter of contemporary greed and celebrity-culture fecklessness. Maguire has known DiCaprio from their days as child actors, and watching them hitting a speakeasy together brings back reminiscences of the high, heady days of the Pussy Posse. This ostensible indictment of the rich’s “vast carelessness” comes with Brooks Brothers and Tiffany’s tie-ins, and a Jay-Z ‘executive-produced’ soundtrack whose leadoff single is Lana Del Rey’s ‘Young and Beautiful’, the product of a marketing conspiracy whose complex, sinister mechanism would boggle Scott Fitzgerald’s imagination.

Yet it is a fact that every cautionary tale must also be an invitation, truer than ever in tantalisingly visual cinema. Fitzgerald’s novel, whose shining world seduces and abandons the reader, would not be great if it did not risk appearing as a celebration of the very thing that it despises. Luhrmann’s Gatsby owes much of its frisson to the tension between the director’s destructive extravagance and the melancholy optimism of DiCaprio’s Gatsby, as different as Saturday night and Sunday morning. It is not the novel, no, but happy to report, the madly embattled result is a real movie.