The Day Shall Come first look: Chris Morris, where is thy sting?

The bravura British satirist’s new target is the small matter of fake counter-terrorism operations, but his comic razor seems to have lost its edge. 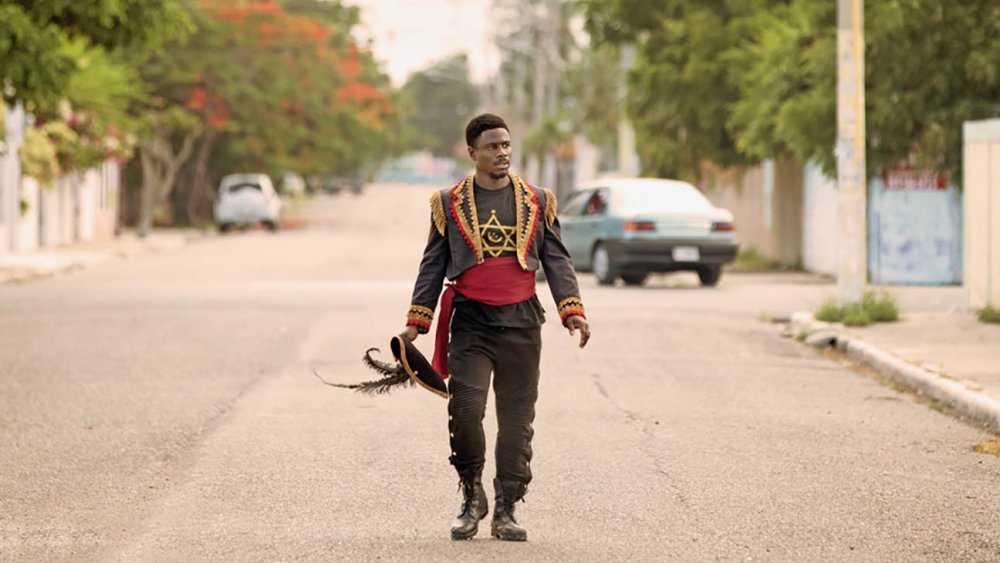 Marchánt Davis as Moses Al Shabazz in The Day Will Come

It’s a whole nine years since Chris Morris’s incendiary, brilliant Four Lions infiltrated cinema screens with its tale of hapless British Muslim jihadists and their cack-handed attempts at home-soil suicide bombings. And, early on, his new film The Day Shall Come seems as if no time has passed at all. Once again we’re watching a small, self-styled minority militia group attempt to overthrow their entrenched oppressors. They’re even, at one point, referred to as “four lone wolves”.

But whereas the Four Lions’ own raw ineptitude brought themselves down, here Morris casts his eye over a wider, more sinister conspiracy. The opening title card reads “Based on a Hundred True Stories”, the filmmaker having researched the numerous real examples of FBI sting operations to deliberately provoke, radicalise and incarcerate suspected or potential homeland threats. Apparently it’s easier to create your own terrorists than catch real ones. It’s Minority Report minus those pesky reports. Or Burn After Reading with added malignancy to go with sheer bureaucratic incompetence.

The central paradox (of many) here is that the FBI’s eventual stooge Moses Al Shabazz (Marchánt Davis), a local black community figure railing against the gentrification of his Miami surroundings, is delusional but harmless. He’s anti-violence, much to the chagrin of his three loyal followers.

Yet this doesn’t stop agent Kendra (Anna Kendrick) targeting him. Before long Moses has gone from being offered automatic weapons by a shady counterfeit al-Qaeda operative to dealing bogus nuclear weapons to undercover cops posing as neo-Nazis. It’s all, effectively, fake news – except for the consequences for Moses, his followers and his family, which are all-too horrifyingly real. Pre-emptive measures justify anything. “Next thing you know,” reasons one agent, “the Statue of Liberty’s wearing a burqa and we’ve beheaded Bruce Springsteen.”

Morris and Jesse Armstrong’s screenplay takes a good while to get going, before the escalating absurdity and hastily improvised scheming finds its groove. But even then the combination of potent satire and pointed silliness feels overfamiliar, not least from the likes of Morris’s former cohort Armando Iannucci’s The Death of Stalin or Veep.

Despite evident sympathy for his beleaguered protagonists, there’s also an uncomfortable sense of Morris punching down. Moses and his crew are consistently the butt of the joke, men who believe that horses can talk and klaxons can summon dinosaurs. Riz Ahmed’s lead in Four Lions was misguided but maintained a certain dignity that’s largely absent here. Morris’s take-no-prisoners style has always been uncompromising and, charitably, one could consider this a comment on America’s abandonment of citizens suffering from mental health issues.

Still, appropriation and authenticity – who gets to tell whose story – weren’t flashpoints in 2010 the way they are today. And one wonders if the abrupt climactic shift from high comedy to post-credits tragedy, complete with one of Prince’s most spiritual songs, feels unearned. It stands in stark contrast to Spike Lee’s BlacKkKlansman, where the same artist’s rendition of Negro spiritual Mary, Don’t You Weep brings the film to elegiac and organic closure.

Chris Morris, for so long a scarily prescient comedy icon, behind the curve? It’s disconcerting to think that the day might have finally come.

Related to The Day Shall Come first look: Chris Morris, where is thy sting?