Plus Mike Leigh on Peterloo, Gaspar Noe on Climax, Desiree Akhavan on The Miseducation of Cameron Post, Kogonada on Columbus, Chloé Zhao on The Rider, Bart Layton on American Animals, the comic genius of Elaine May, Jackie Chan, LFF highlights and much more.

“Where are the working-class stories and talent in UK cinema culture today?” asks Danny Leigh in the cover story of our October issue. Rewind to the Woodfall era of the 1960s, and working-class actors and directors were revitalising British filmmaking. But over 50 years on, Leigh finds their equivalents struggling to take hold in the industry.

Meanwhile the subject of class has been ignored in many of the debates around privilege and identity in cinema. Leigh explores those working-class filmmakers and stories that have made an impact, the ones that should have made more and explores what needs to change. Meanwhile Anna Coatman argues that since the 90s, women have been key to reimagining the scope of working-class cinema beyond social realism.

Continuing the class theme of the issue, Matthew Sweet talks to Mike Leigh about his new film Peterloo, the first fiction feature to be made about the 1819 massacre of peaceful protesters demanding parliamentary reform: “I grew up a 15-minute bus ride from where this happened,” says Leigh. “But we didn’t know about it. And loads of folk working on the ﬁlm, who were from up north, had never heard of it.” Sweet surveys how Leigh’s work has work has “already shown us the future to which Peterloo leads” while the director tells of his battles against cliché and his own revolt against suggestions to change his working methods.

As cinema’s marmite provocateur Gaspar Noé takes on the dance movie with Climax, Anna Bogutskaya talks to him about his bacchanalian frenzy of sex and violence and how he wants Rainer Werner Fassbinder to be proud of him.

Carrie Rickey revisits the remarkable career of Elaine May, the overlooked comedienne, director and screenwriter who skewered male vanity with relish.

With LGBTQ+ rights in the US increasingly under threat by the Trump administration, Desiree Akhavan discusses her timely 1990s-set tale of a woman sent to a rural gay conversion therapy centre The Miseducation of Cameron Post with Anna Coatman.

“Few recent films capture the spirit of place as deeply, or as idiosyncratically, as Columbus,” posits Jonathan Romney as he talks to the film’s director, Kogonada. S&S readers will know Kogonada from his various video essays; his debut feature is a love letter to the serene elegance of modernist architecture.

A number of Jackie Chan’s films being released on Blu-ray provides the perfect excuse for Nick Pinkerton to revel in the astonishing courage, lunatic stuntwork and sheer fun of the action maestro’s best films.

Also this issue: Catherine Wheatley reassesses the career of Angela Schanelec; Hannah McGill takes aim at Peter Biskind’s musings on film and extremism; Chloé Zhao talks about The Rider; Bart Layton discusses American Animals; a preview of the BFI London Film Festival; a report from the Locarno film festival; reviews of Faces Places, The Little Stranger, A Northern Soul, Wajib; and much more. 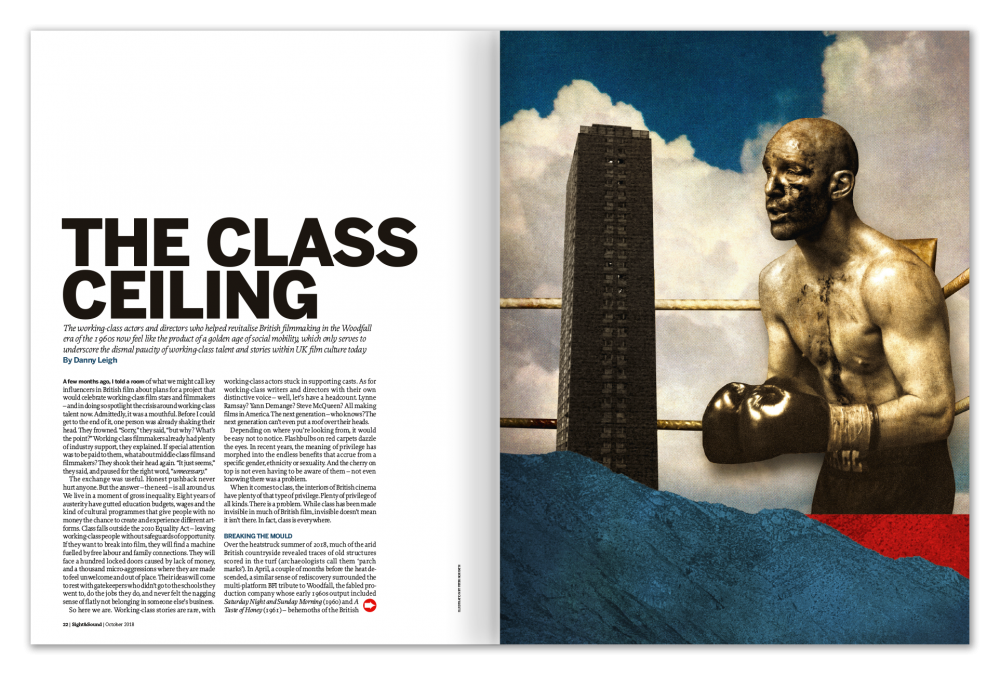 The working-class actors and directors who helped revitalise British filmmaking in the Woodfall era of the 1960s now feel like the product of a golden age of social mobility, which only serves to underscore the dismal paucity of working-class talent and stories within UK film culture today, argues Danny Leigh.

+ A holiday from reality

The kitchen sink films of the 1950s and the social realist tradition of Ken Loach have come to define British working-class cinema, but since the 90s women have been key to reimagining its range. By Anna Coatman. 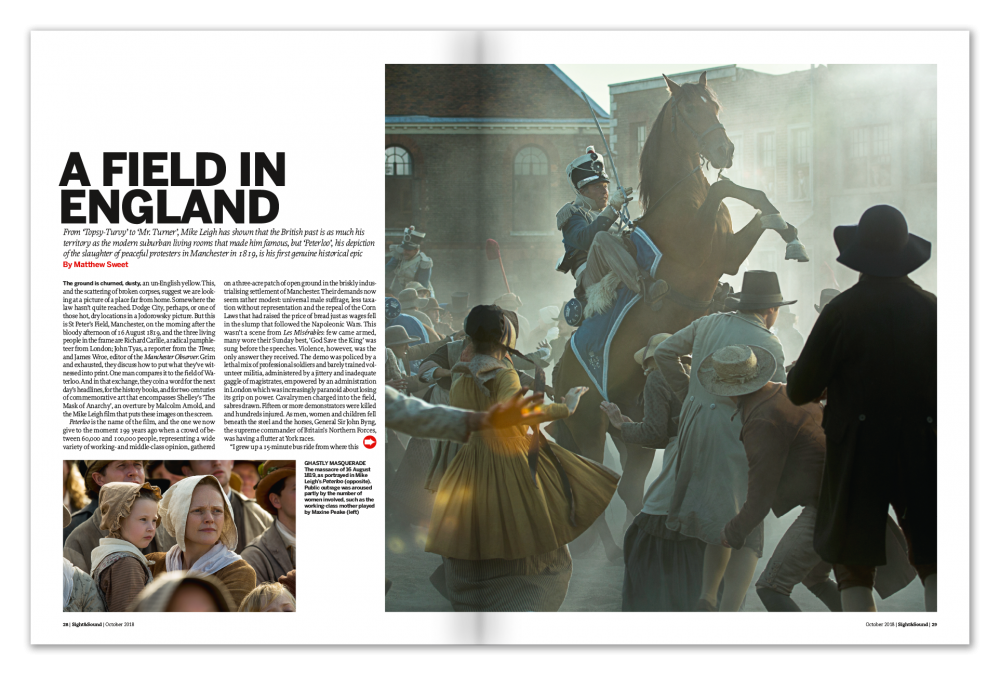 A Field in England

From Topsy-Turvy to Mr. Turner, Mike Leigh has shown that the British past is as much his territory as the modern suburban living rooms that made him famous, but Peterloo, his depiction of the slaughter of peaceful protesters in Manchester in 1819, is his first genuine historical epic. Interview by Matthew Sweet. 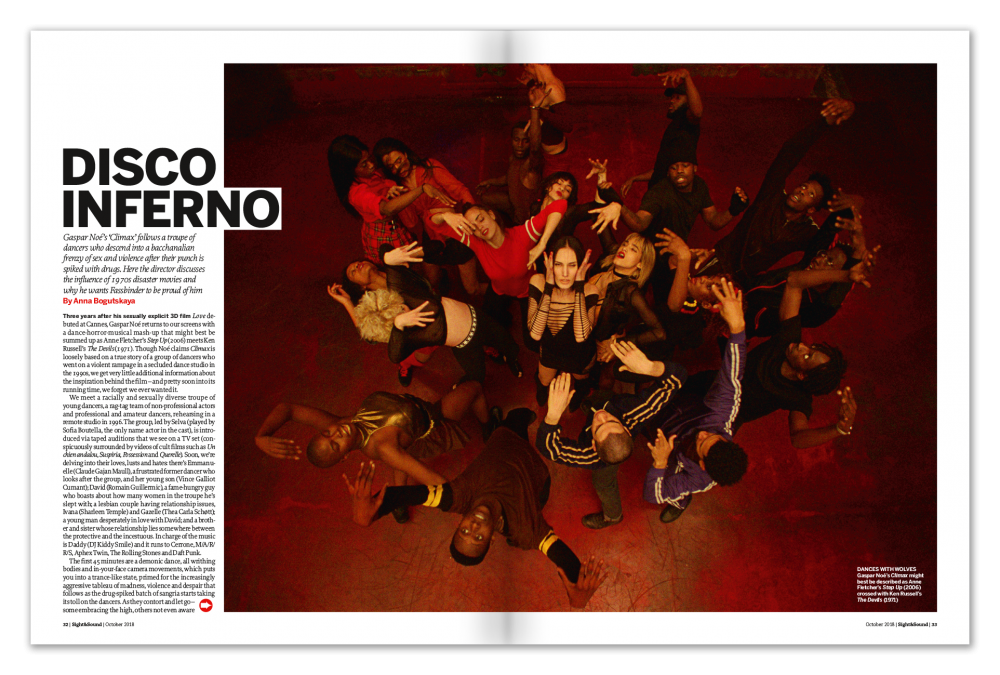 Gaspar Noé’s Climax follows a troupe of dancers who descend into a bacchanalian frenzy of sex and violence after their punch is spiked with drugs. Here the director discusses the influence of 1970s disaster movies and why he wants Fassbinder to be proud of him. By Anna Bogutskaya. 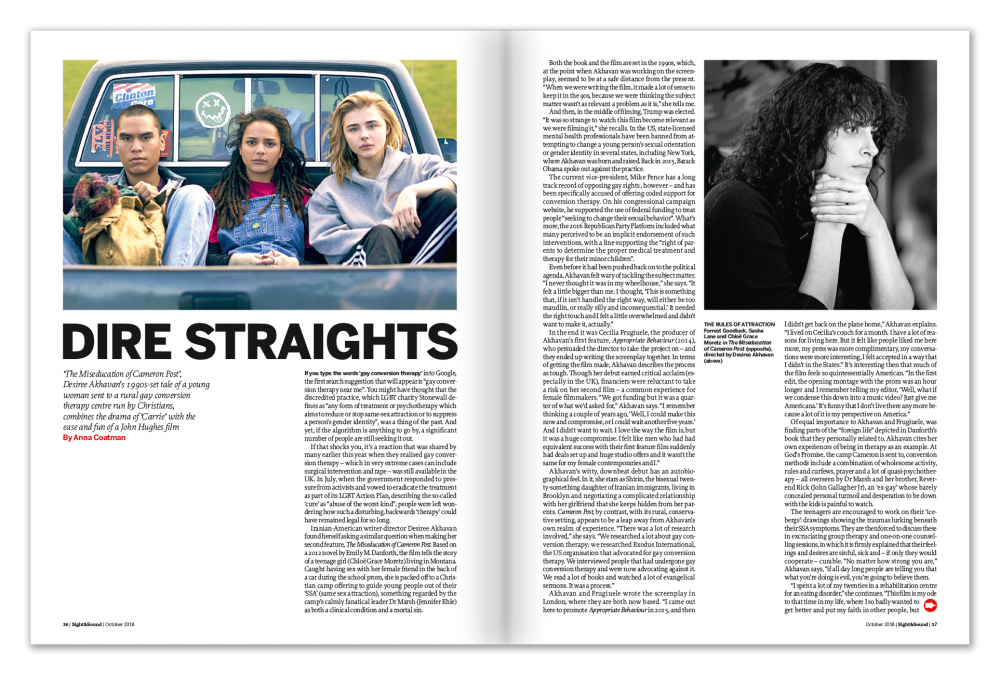 The Miseducation of Cameron Post, Desiree Akhavan’s 1990s-set tale of a young woman sent to a rural gay conversion therapy centre run by Christians, combines the drama of Carrie with the ease and fun of a John Hughes film. Interview by Anna Coatman. 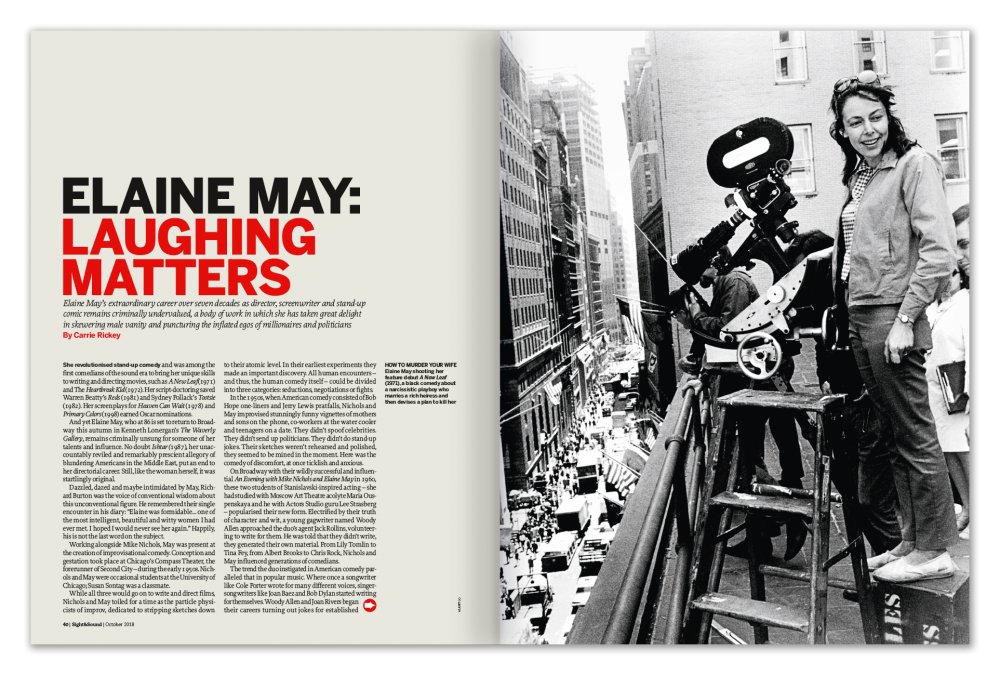 Elaine May’s extraordinary career over seven decades as director, screenwriter and stand-up comic remains criminally undervalued, a body of work in which she has taken great delight in skewering male vanity and puncturing the inflated egos of millionaires and politicians. By Carrie Rickey. 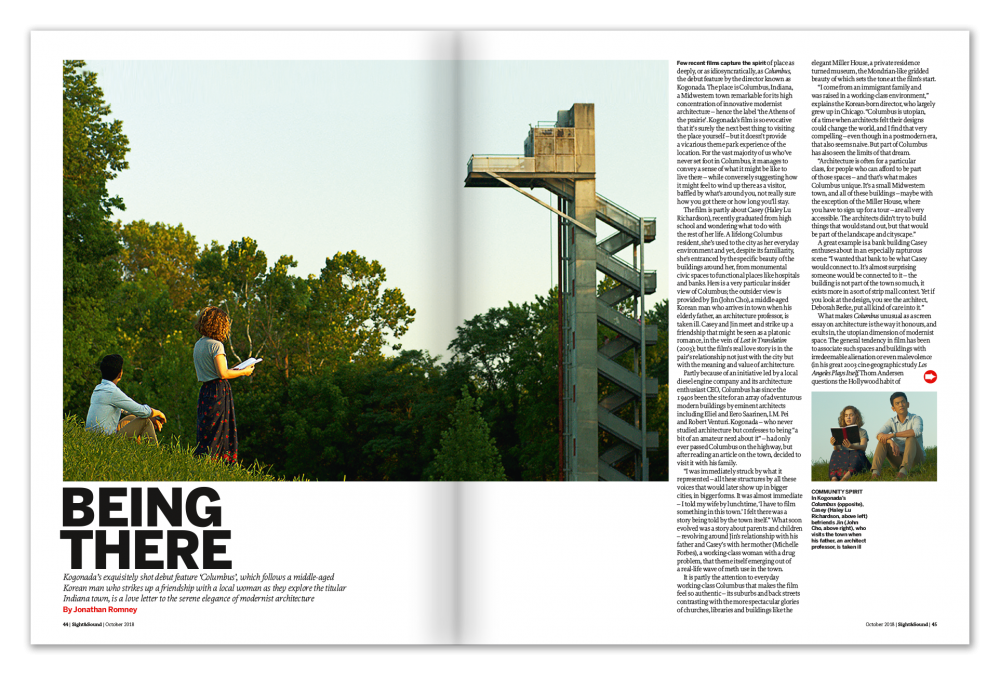 Kogonada’s exquisitely shot debut feature Columbus, which follows a middle-aged Korean man who strikes up a friendship with a local woman as they explore the titular Indiana town, is a love letter to the serene elegance of modernist architecture. By Jonathan Romney.

The jostling for February’s Academy Awards has begun. 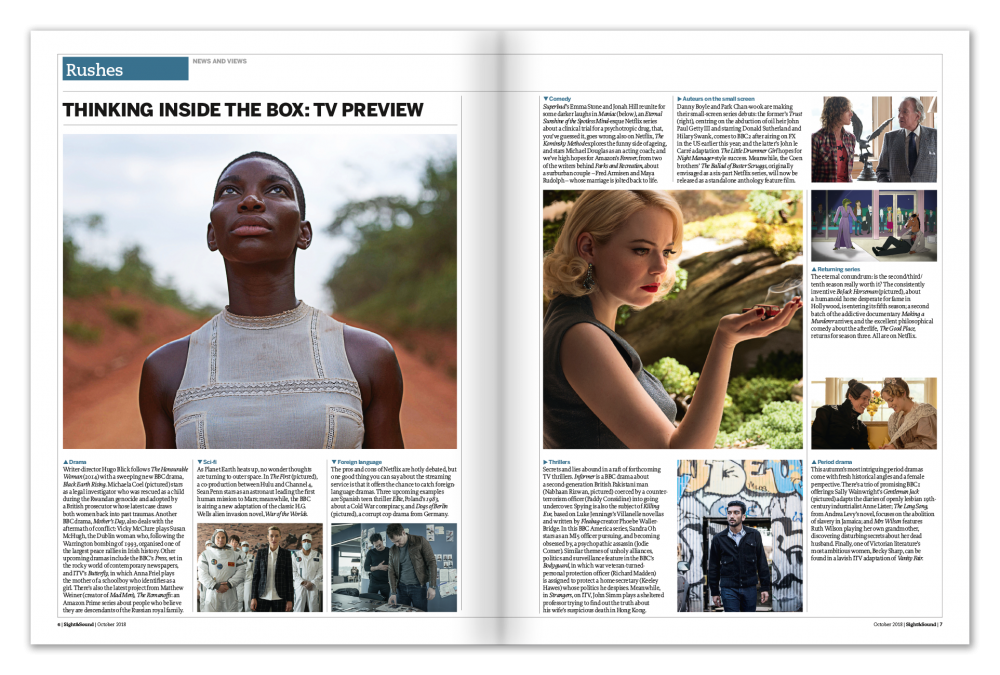 Thinking inside the box: TV preview

Interview: Of horses and men

An injured rodeo rider faces the traumatic prospect of losing everything he lives for in Chloé Zhao’s The Rider. By Sophie Brown.

The numbers: Leave No Trace

Bart Layton blends documentary and fiction in his true-life tale of a group of rare-book thieves, American Animals. By Lou Thomas.

This year’s BFI London Film Festival has enough blazing international talent on show to set the Thames on fire. By Nick James. 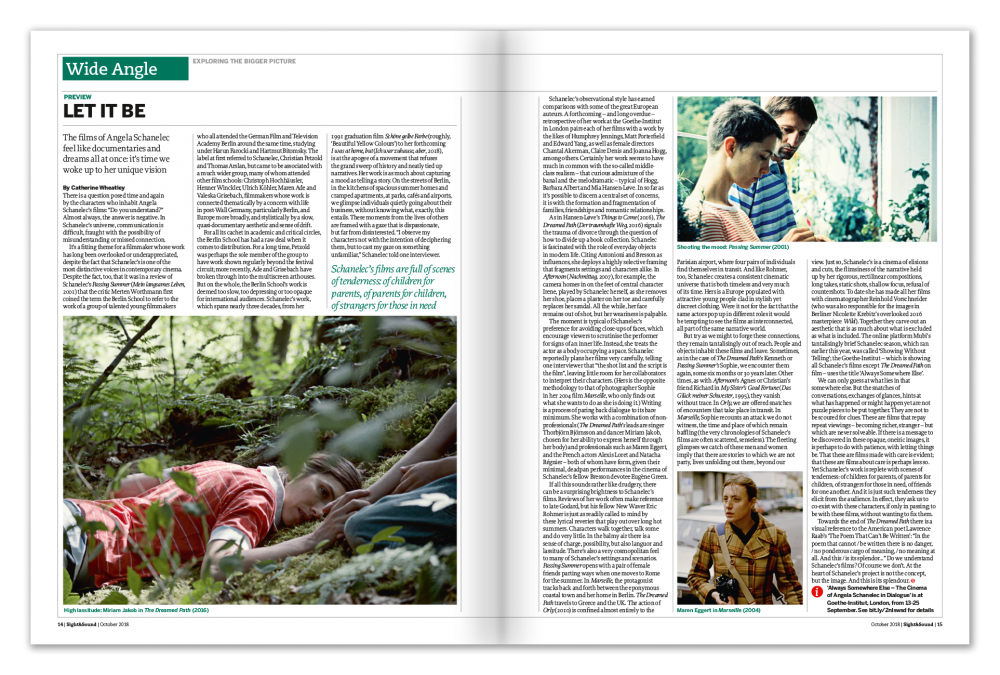 Preview: Let it be

The films of Angela Schanelec feel like documentaries and dreams all at once: it’s time we woke up to her unique vision. By Catherine Wheatley.

The gripping archive programme at this year’s BFI London Film Festival shows that the past isn’t such a foreign country after all. By Pamela Hutchinson.

A generation of young black British filmmakers is going outside the official archive to find new ways of interrogating history. By Matthew Barrington.

This year’s Swiss festival was as open as ever to the oblique and shapeshifting – but also found room for a few laughs. By Kieron Corless. 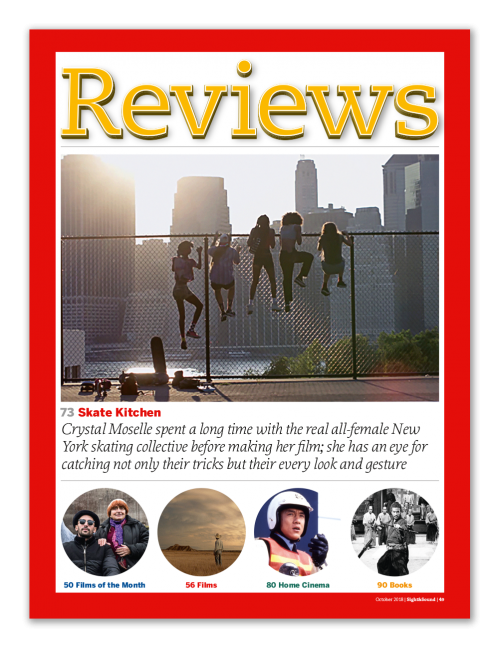 Anchor and Hope
Black ’47
Christopher Robin
Climax
Columbus
The Darkest Minds
Down to Earth
The Gospel According to André
In Praise of Nothing
Island
The King
Kusama: Infinity
Lucky
Matangi/Maya/M.I.A
The Meg
The Miseducation of Cameron Post
Never Here
A Northern Soul
Pope Francis: A Man of His Word
Puzzle
Reinventing Marvin
The Rider
The Seagull
Skate Kitchen
The Spy Who Dumped Me
Superfly
Tehran Taboo
Under the Wire
Unfriended: Dark Web
Upgrade
Wajib
The Wife 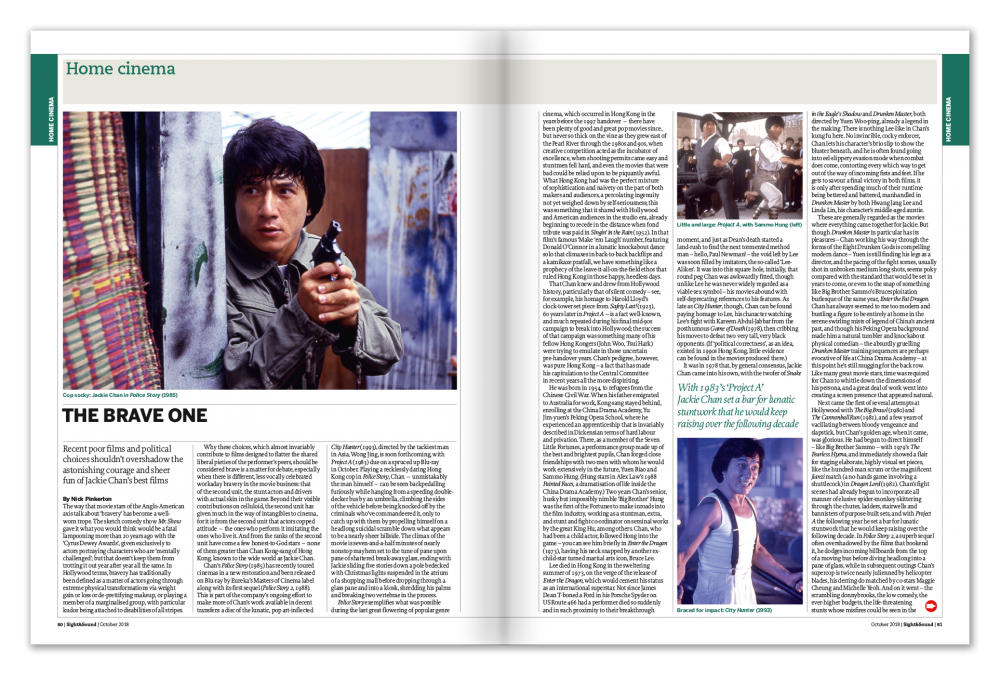 Jackie Chan: the brave one

In 1966, people marched to protest against its banning – but The Nun is a sober, faithful version of an 18th-century novel. What is going on? By Jonathan Rosenbaum.

Tod Browning’s pacy tale of working-class life in the Depression wasn’t much liked in 1933: maybe we’re ready for it now. By Martyn Conterio. 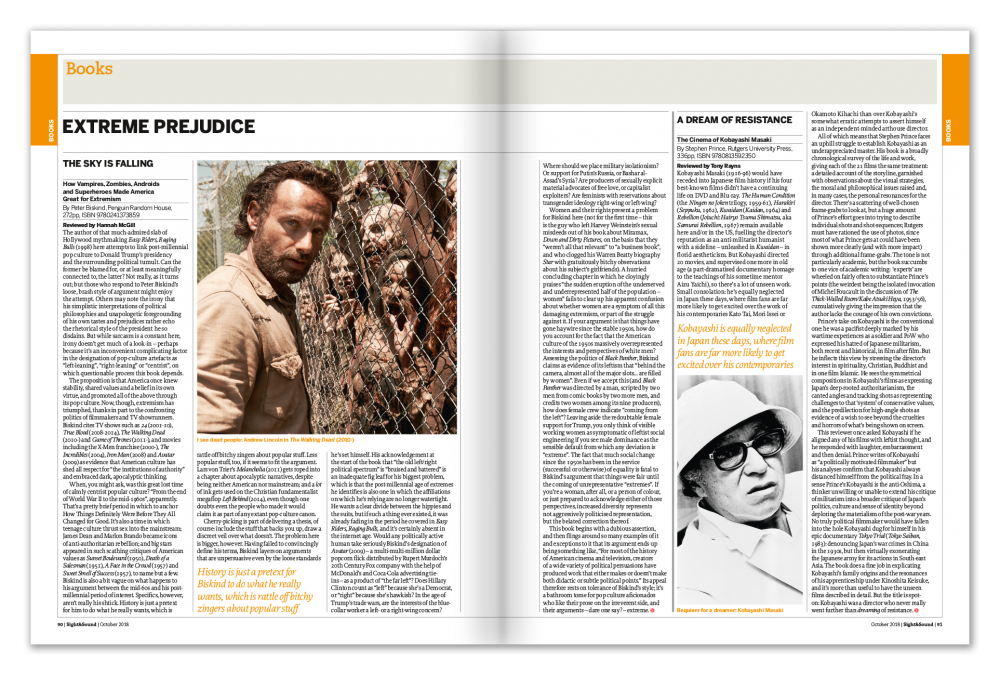 The Sky is Falling: How Vampires, Zombies, Androids and Superheroes Made America Great for Extremism by Peter Biskind (Penguin Random House) reviewed by Hannah McGill.

A Dream of Resistance: The Cinema of Kobayashi Masaki by Stephen Prince (Rutgers University Press) reviewed by Tony Rayns.

The party’s over for Warren Beatty’s randy hairdresser at the close of Hal Ashby’s 1968-set comedy – but it’s over for everyone else too. By Sheila O’Malley.