Film of the week: The Wife – Glenn Close glowers in the shadow of her prize lesser half

The Nobel coronation of Jonathan Pryce’s peacocking author finally capsizes his marriage’s balance of power in this prosaic but richly acted adaptation of Meg Wolitzer’s story of female disentitlement. 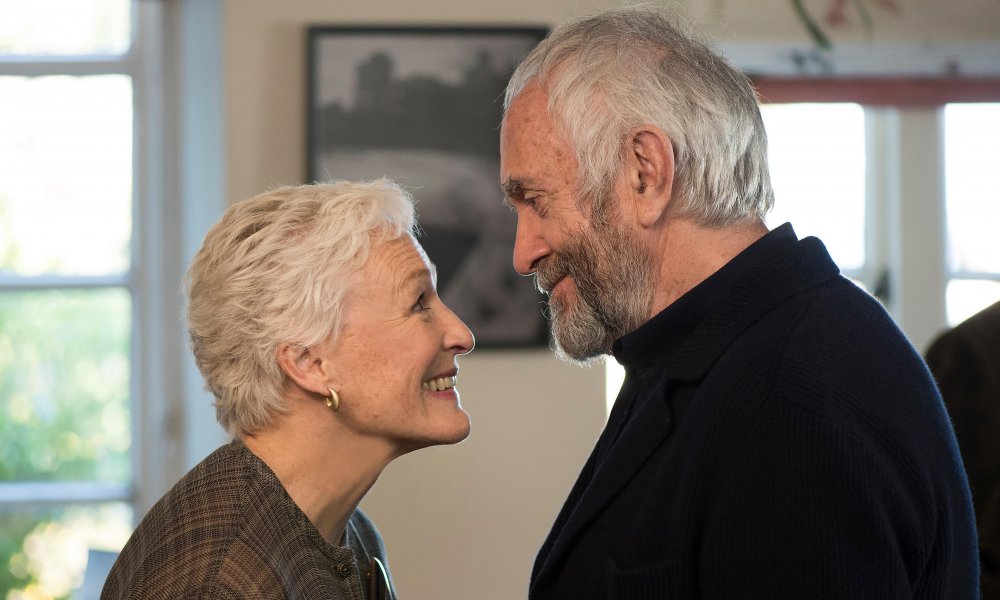 “Without this woman I am nobody,” insists grizzled American literary lion Joe Castleman of his devoted wife Joan, to the friends gathered to celebrate the crowning of his glorious career with a Nobel Prize. Like many remarks in this absorbing drama about a marriage rocked by a historic secret and female rage, it’s a line that will come to reverberate with hidden meaning.

Adapted from Meg Wolitzer’s breakout book of 2003 (pertinently, the only other adaptation of her work is Nora Ephron’s This Is My Life, about a woman claiming her creativity), Björn Runge’s conventionally shot drama pares away much of her flashbacking satire of US literary life to concentrate beadily on the unforeseen crisis that hits the Castlemans when Joe receives the phone call he’s been longing for.

Like 45 Years (2015), this is a film about the sudden disconnections and shifts in power that occur when one partner’s actions shake a long marriage to its very foundations. A wife fit for Walter Winchell’s cosy wish (“Never above you, never below you, always beside you”), Glenn Close’s smart, shy, supportive Joan runs needy blowhard Joe’s life with unobtrusive expertise and quiet charm, proffering pills, reading glasses and advice right on cue. 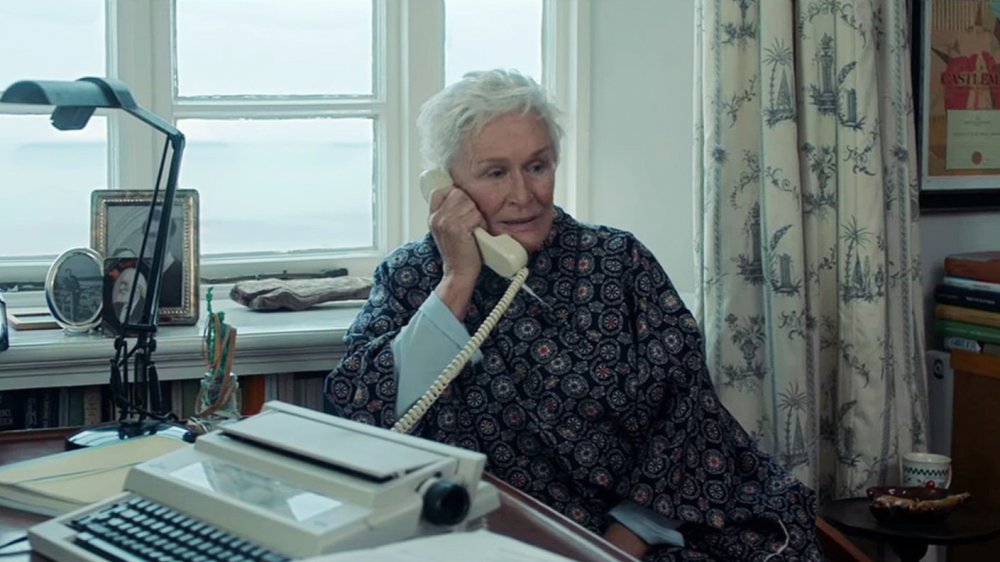 Despite her central role in Joe’s success, the world insists on shoving her to one side. Runge’s unobtrusive camera even positions her physically as the patronised partner, talked over and constantly edged out as the couple arrive in Stockholm for the prize ceremony, where “the wives” are offered “shopping and beauty treatments”. Misogyny is ever-present in the film’s early-1990s setting, but rather better disguised than it was during the Castlemans’ 1950s courtship, as we see in the flashbacks to a peacocking and already married Joe seducing talented student Joan.

Screenwriter Jane Anderson, a dab hand at frustrated and complicated women after Olive Kittredge (2014), lets resentment needle through Joan’s calm, gracious facade, as Joe responds to the heady attention in Stockholm by hitting on the female photographer who follows them around, one of innumerable infidelities he has committed. Too smart to paint the Castlemans as villain and victim, the film follows Jonathan Pryce’s garrulous, insecure Joe feeling fraudulent and racked with nerves at the Nobel rehearsals, just one in a parade made up exclusively of pale, besuited men in late middle age. Pryce, who played a similar if rather cooler Philip Roth-style king of American letters in Listen Up Philip (2014), is a delightful mix of entitlement, self-absorption and uxorious gratitude, his Joe both ego-stroked and faintly ashamed by the organised adulation. 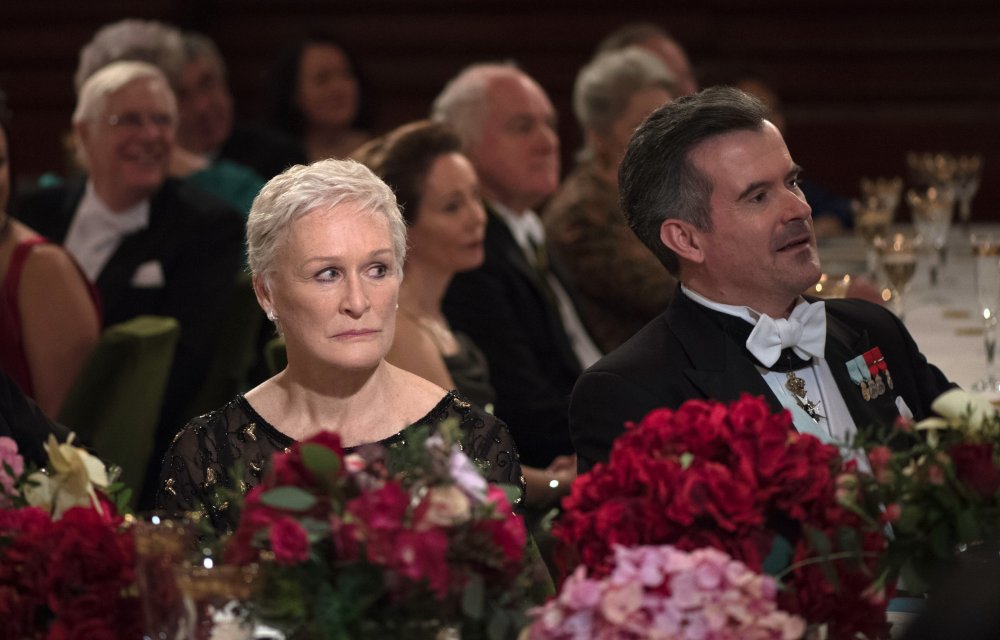 This is a small, neat story, slipping in the fatal compromises the Castlemans have made along the way as sharp period snapshots, and its backward glances at the boys’ club of American fiction are alternately sad and funny. Assured by a drunken authoress that “the public can’t stand bold prose from a woman”, the young Joan (played by an assured Annie Starke, Close’s daughter) abandons any hope of a career as a writer. By the 1960s she’s a publishing assistant to male editors who deride female submissions for their “soft POV”.

Even Nathanial Bone (a slippery Christian Slater), the would-be biographer eager to discover dirt on Joe, flirts clumsily with Joan in Stockholm, trying to prise keenly suspected secrets out of her. Close, whose multilayered performance is the film’s motor, does really fine work here, deftly sidestepping the conversational traps but letting possibilities dance momentarily before Bone’s hungry eyes. 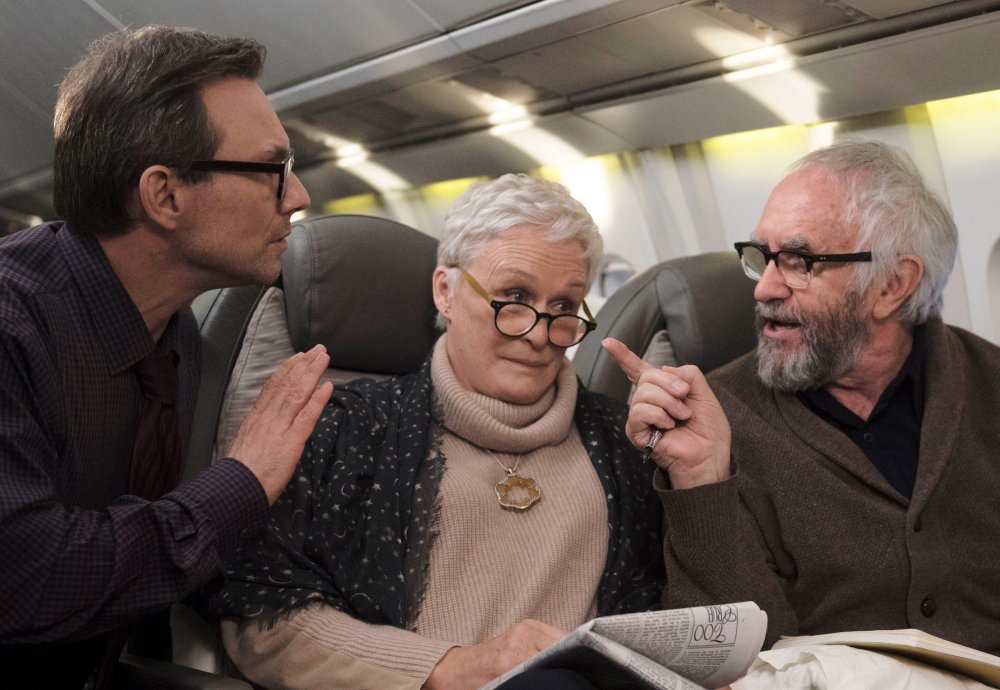 Christian Slater as Nathanial Bone with Close and Pryce

As the film progresses, and as her ambivalence about her long-ago decision to stand behind her man becomes regret and then rage, Close keeps things calm rather than grandstanding. The playing is always complex, her Joan caring yet irritable, pulsing with damped-down fury while her face shines with ambivalent pride for the “vast, restlessly brilliant body of work” that Joe is acclaimed for from the podium. Like Sonya Tolstoy in The Last Station (2009), her life has been sacrificed to her husband’s brilliant career. But Anderson’s script points up the shared joys (the birth of a longed-for first grandchild unites them momentarily in gladness) as well as the grumbling pains of their long marriage (Max Irons’s would-be writer son grates against Joe in a clumsily Oedipal subplot).

Au fond, it’s an actors’ film, visually undemanding and at its best when its well-matched pairs are facing off – Close and Slater fencing verbally, or Pryce and Close dashing red-hot recriminations at one another until only one is left standing. A story of a voice riskily reclaimed, it suggests there’s a certain truth in George Bernard Shaw’s maxim: “If you cannot get rid of the family skeleton, you may as well make it dance.”