This rarely shown film by the great Japanese director explores new ways for men and women to live together and apart – as victims of modernity spread their wings to embrace dangerous freedoms. 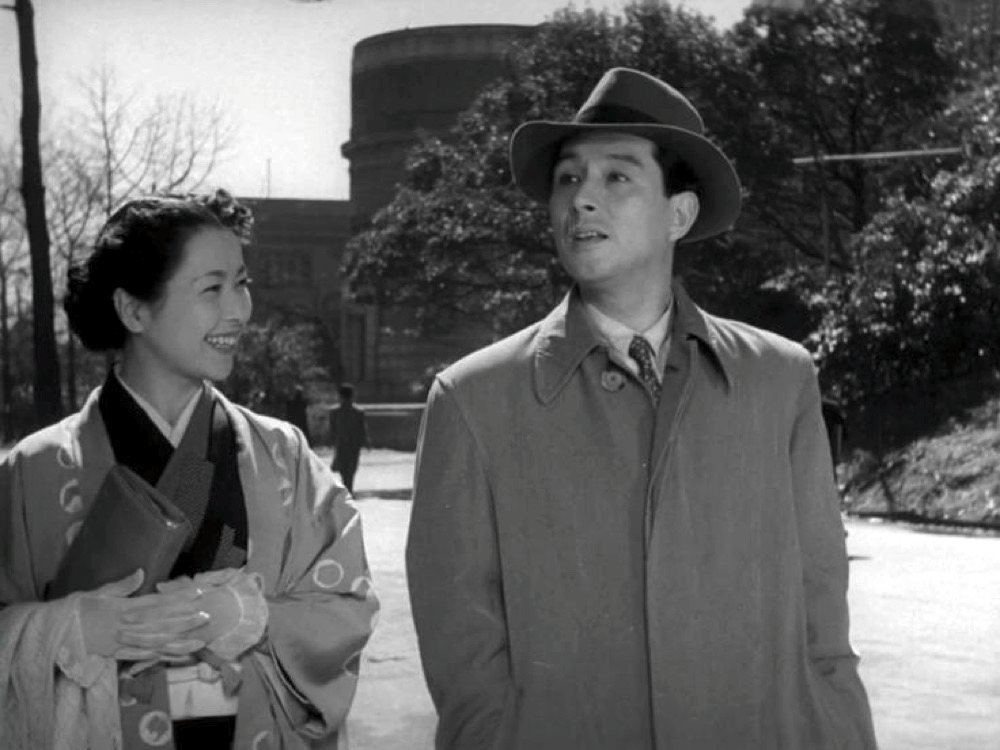 Approximately mid-way through Naruse Mikio’s Wife (Tsuma, 1953), Tokyo-based salaryman Nakagaa Toichi (Uehara Ken) and his firm’s general director take the train to Osaka, a business trip which will give Toichi a break from his troubled marriage. As the men relax, Toichi’s boss notices a woman (played by Naruse regular Shiozawa Toyoji) wearing a kimono. “Get a load of her,” he declares, adding “I wonder what type of woman she is.”

“She doesn’t look like a dancer or a housewife,” notes Toichi, while his boss speculates that “Maybe she’s a geisha. She’s probably 25 or 26.” “I think she’s older than that,” responds Toichi. “Looks like she’s travelling alone,” observes the boss.

Naruse provides us with two images of the woman under discussion, the first being a medium shot showing her removing a travelling bag from the train’s overhead compartment, the second a medium close-up of her face as she reorganises her (offscreen) luggage. At no point does this woman occupy the same visual space as the two men, and while they stare at her with unconcealed fascination, her eyes remain fixed on the bag and its contents. 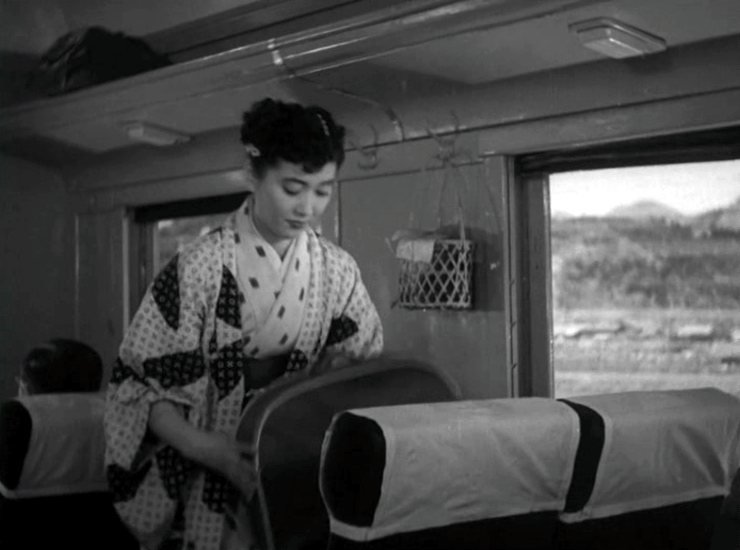 Judged by most theories relating to the male gaze, this scene is surely one that reinforces the misogynistic dynamics of the wider culture: the men look, while the woman is looked at. Yet Naruse complicates any such reading by emphasising female autonomy. A failure to return the look does not define this woman as passive, instead insinuating that these bewildered males are simply of no interest or relevance to her. The small basket hanging from a hook by her seat and the confidence with which she moves her bag from one place to another suggest an individual comfortable with train excursions, and accustomed to travelling alone. The men, much as they may wish to possess her, are left considering not an unproblematic object of desire, but rather a mystery whose solution stays frustratingly out of reach.

This woman makes for a striking contrast with Toichi’s wife, Mineko (Takamine Mieko), whose independence has been lost in an increasingly frigid relationship. The boarding house run by Mineko serves as a stage for several subplots relating to the organisation of heterosexual desire in post-war Japan: the tenants include a young male artist desperate for romantic attachments, a ‘kept’ woman whose married benefactor drives his neglected wife to suicide, and a couple who find their personal relations improving once they have separated. 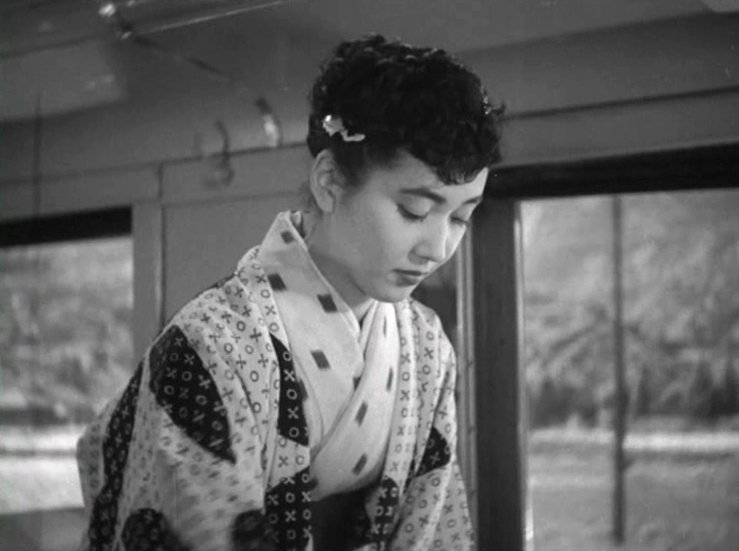 But Wife’s central concern is traditional marriage, seen as a breeding ground for dissatisfaction. The film begins with husband and wife preparing for the day, a voiceover from Mineko complaining about the lovelessness of her union being answered by a voiceover from Toichi expressing similar sentiments.

Naruse’s meticulously organised patterns of imagery make it clear that the husband enjoys freedoms which, however compromised, are inaccessible to his spouse, even enabling him to have an affair with co-worker Fusako Sawara (Tanami Yatsuko). For most of the running time, camera movements (aside from a handful of minor reframings) are motivated by the husband, the most significant exception being a shot in which Mineko’s independent female friend Sakurai Setsuko (Takasugi Sanae) visits Toichi in his office, her passage from one end of this small room to another being followed by Naruse’s camera. 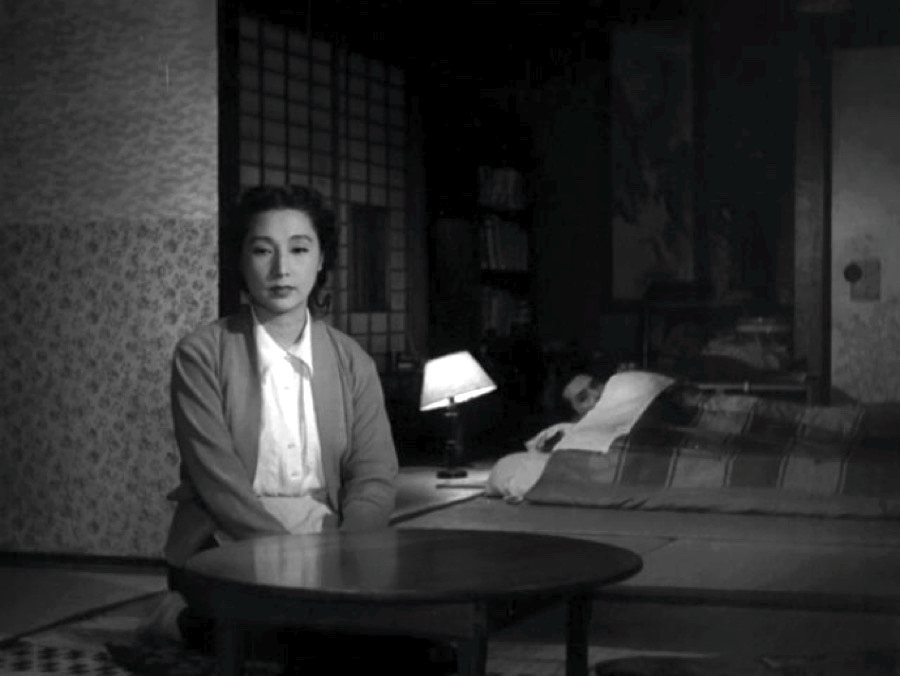 For the most part, such stylistic assertion of agency is unavailable to Mineko; as she walks around the house, her activities are observed by a stationary camera, and when she exits a shot, she is rarely granted enough liberty to pass through the edges of the frame, instead disappearing behind partitions located at the edges of the screen. When Mineko visits friends or relatives, Naruse usually cuts from one location to another, eliminating her journey in its entirety. It is only ten minutes from the film’s end, when Mineko decides to take decisive action by confronting her husband’s lover, that camera movements are determined by her.

The irony, of course, is that the decisive action permitting Mineko to momentarily control Wife’s mise en scène is made in defence of the very institution which has rendered her powerless. Our familiarity with the conventions of melodrama will surely lead us to expect an ending wherein the necessity of fighting for a marriage causes the couple to rediscover their love for each other, a variation on those comedies of remarriage so popular in 1930s Hollywood. Yet after Sawara has withdrawn, allowing Mineko to be reunited with Toichi, Naruse brings the narrative to a conclusion by repeating the opening sequence. The final shots again show husband and wife engaged in morning routines, with separate voiceovers once more speaking of their estrangement. 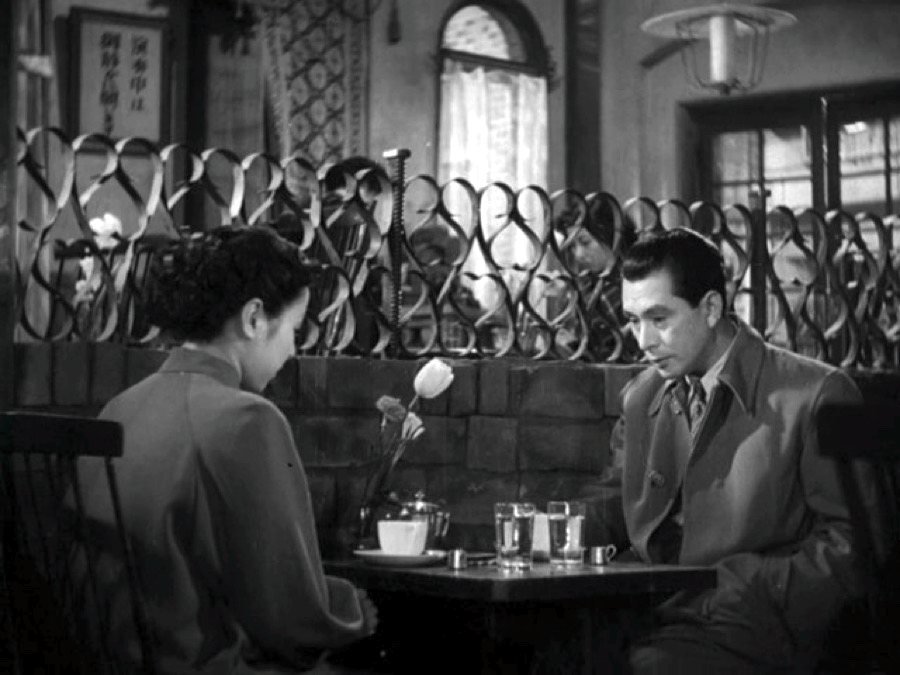 Which brings us back to trains, those symbols of modernity that play such a prominent role in classical Japanese cinema (making for a fascinating comparison with their function in the American western). The train sequence discussed earlier begins with Toichi and his boss bemoaning those familial obligations they have momentarily left behind (“It’s nice to spread our wings for a change”). For them, the train represents liberation from both the corporate rat race and the institution of marriage which functions as its domestic equivalent.

Which is to say that these victims of modernity can only relax by riding on a key emblem of the society they are fleeing. Trains figure prominently throughout the film, often moving across the background of the frame, and their use, here and elsewhere in Naruse, always shares this ambivalence: they are simultaneously emblems of emancipation from the characters’ quotidian lives, and representatives of a world which has rendered those lives unendurable. Our last glimpse of Toichi shows him approaching a railway crossing, pausing while a train passes by (intervening between him and the camera), then wearily continuing on his way to work. This is followed by Wife’s closing image: Mineko attending to her household chores. Together or apart, at home or in the office, on trains or walking, Mineko and Toichi are trapped in prisons from which they cannot escape – indeed, from which there is no space they could escape to. 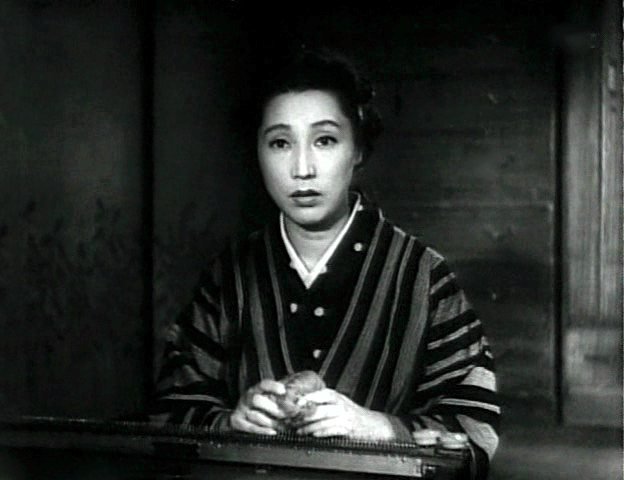 Yet the train accompanying Toichi’s final appearance also recalls that solitary female traveller who refused to fit into any of the available boxes. This nameless woman, who remains an enigma to both on and offscreen spectators, points towards new possibilities of existence – possibilities involving the rejection of those domestic arrangements whose disastrous consequences Naruse has demonstrated – which are all the more tantalising for being unspecified. For how can heterosexual desire be organised in the absence of evidence that it actually is heterosexual?

Wife itself stands among the finest representatives of an ‘unspecified’ cinema, for although it seems to me an inexhaustible masterpiece (I included it on my ten greatest films list for Sight & Sound’s 2012 poll), it has never been distributed outside Japan, is absent from BFI Southbank’s currently running Tears and Laughter: Women in Japanese Melodrama season (though another Naruse film, Floating Clouds, plays on 2 and 5 November), and can only be obtained online from those sites where fan-subtitlers congregate. A sad fate for a film which deserves to be better known – or perhaps an appropriate one for a work which implies that individuals living in the margins of society may be happier than those afraid to venture beyond the mainstream.

Related to Mikio Naruse’s Wife: married to the mainstream