A shard of ice in a venerable marriage: Andrew Haigh’s masterly follow-up to Weekend sees the decades turn to fog. 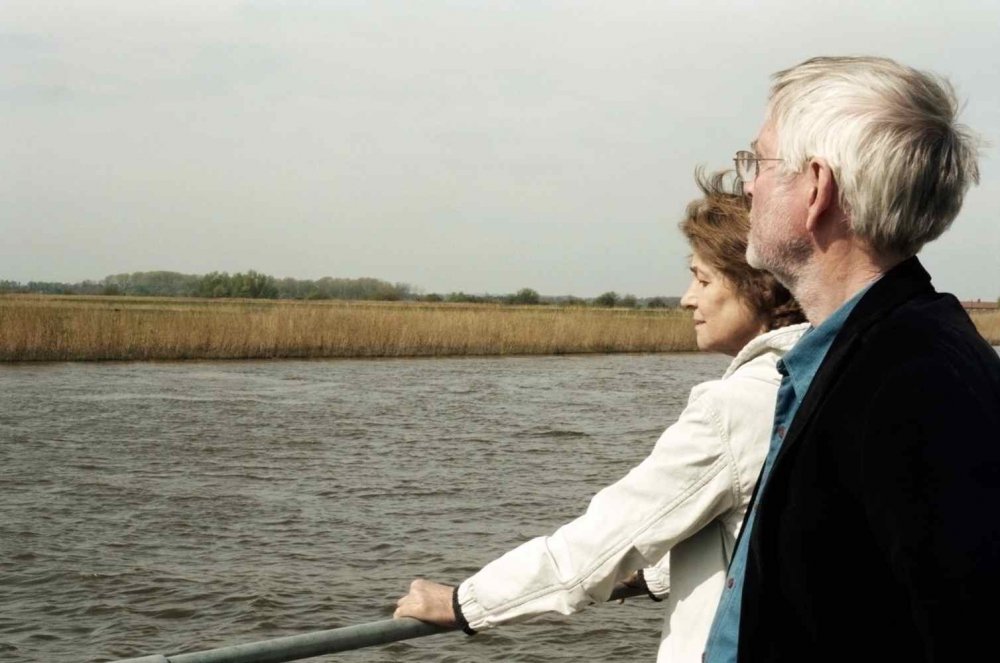 After the astonishing critical and commercial success of his second film Weekend (2011), Andrew Haigh is back with a new feature that for the first time moves away from gay storylines (2009’s Greek Pete was about a rent boy, and Haigh’s contributions to HBO’s Looking were also usually gay-themed). It’s a gear change that at least subliminally recalls François Ozon, and not just because of Charlotte Rampling’s turn in Under the Sand (2000).

In 45 Years, Rampling plays Kate, whom we first encounter returning from an early-morning walk near the Norfolk Broads. A postman has a letter for her husband Geoff (Tom Courtenay). At the kitchen table, the letter is opened: it’s a communication from the Swiss authorities revealing that the body of Geoff’s great lost love Katya, who plunged to her death in the mountains in 1962, has been found in a snowmelt, staring up from the ice deep inside a glacier. From this brilliant, almost Joycean proposition of frozen romantic perfection ruining a party (see The Dead), it seems at some points that Kate and Geoff’s marriage may not even survive until the following weekend, when a celebration for their 45th wedding anniversary has been arranged on a fairly grand scale.

45 Years can be viewed in very distinct ways. You can either see it as a portrait of two people – not quite kindred spirits but muddling-along firm friends – who have grown happy and old together, only for the husband to fall prey to a dangerous delusion about the marriage itself, perhaps brought on by a deterioration in his health and mental capacity. On the other hand you can take a far bleaker view: that it’s a tale of ‘truth will out’, and that by a horrible coincidence a major relationship landmark has been thrown into an unforgiving light by a macabre revelation. 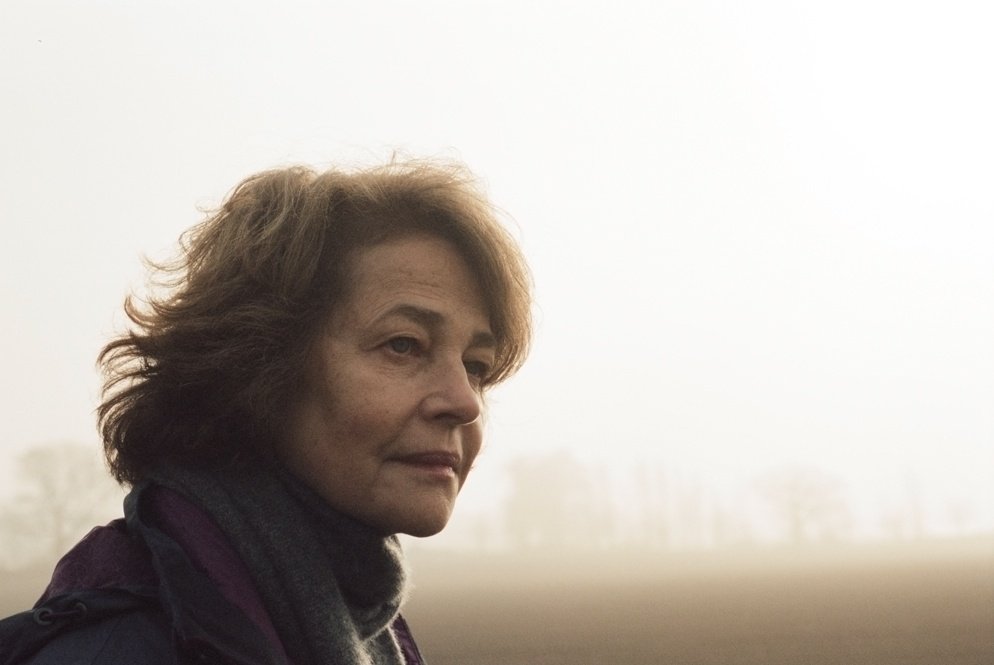 This is a film that stays with the wife. Haigh’s interest is very much in Kate, who is in almost every scene. Over the course of the week we see her soldiering on with the business of organising the party, despite increasing evidence that her husband is going off the rails. There are some tender scenes, but they can often be construed in different ways – when Kate bandages Geoff’s hand, for example, we don’t know whether his explanation for the injury is true or false. Was there ever really a broken ballcock – or was he scrabbling to unlock the attic storeroom and the treasures of the past? Kate and Geoff appear to be childless and devote most of their love to their dog Max (possibly a cinephile joke – see Max mon amour).

Time is always hovering in 45 Years – clock faces, clocks ticking, the sound of clocks chiming. In town (Norwich, though it’s not named), Kate gazes twice in the window of a jeweller’s, and on both occasions decides against buying her husband a wristwatch. Each time the town clock chimes behind her – first it’s three times, then ten. “I was going to get you a watch,” Kate tells Geoff in the taxi on the way to their anniversary party at the end of the film. “I like not knowing the time,” he replies. 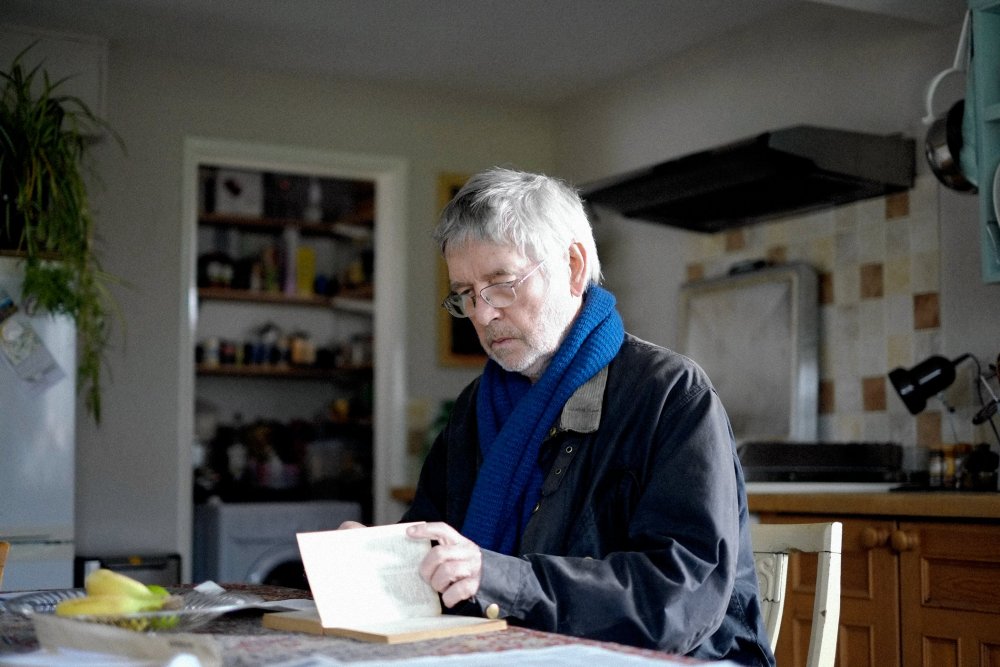 Courtenay’s character Geoff seems caught up in an escalating series of absences and disorientations. A lunch thrown by his old work colleagues enrages him; it doesn’t help that Kate has forced him to go. Then she comes back to find him listening to music and reading books that he associated with Katya, and discovers that he’s planning to fly to Switzerland to gaze on the face of his former love on the very eve of their 45th year.

The script, co-authored by Haigh with David Constantine, writer of the original short story, is full of majestic, despairing notes; the look of the film is muted and wintry. The aural landscape is remarkable: from the opening noise of a slide projector working in the darkness (a pre-echo of Rampling in the attic looking at images of the woman her husband really wanted to marry) to the hummed tune of Smoke Gets in Your Eyes as she takes the fateful letter from the postman, all the sounds make for subtle emotional influence, beautifully thought out and arranged.

Both actors give stunning performances. Rampling’s evokes wordless horror as brilliantly as she always does, with angry, jealous looks. In the faraway Alps a frozen face is opening its eyes. The lights flashed around the room by the glitterball are like silver snowflakes, “falling, like the descent of their last end, upon all the living and the dead”. Is the marriage sick, or is one of them sick? We’ll never know – the temperament of the viewer will colour that in. 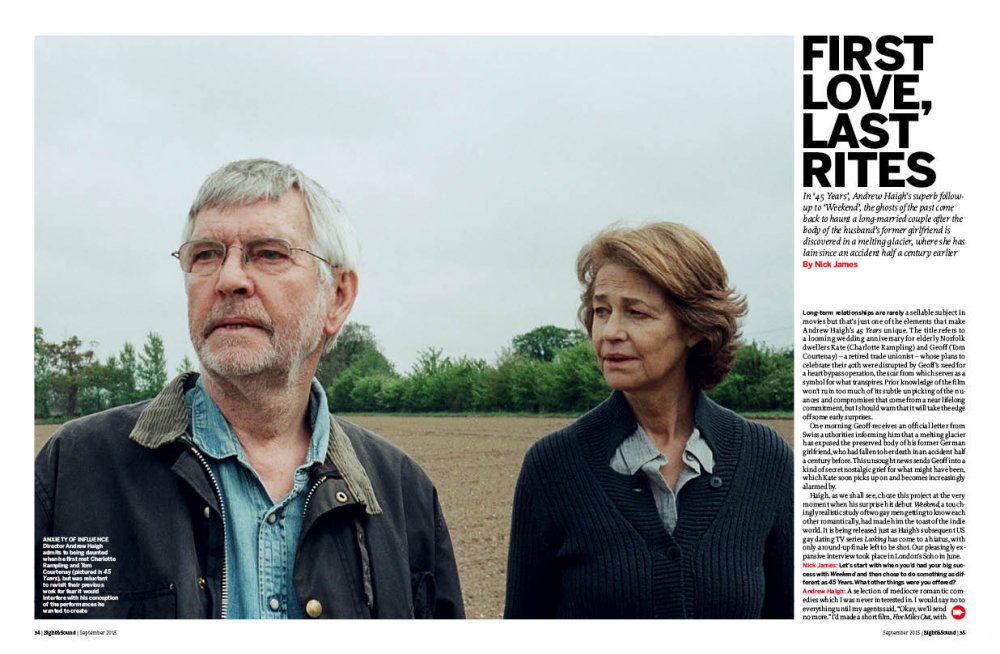 In 45 Years, Andrew Haigh’s superb follow-up to Weekend, the ghosts of the past come back to haunt a long-married couple after the body of the husband’s former girlfriend is discovered in a melting glacier. Nick James talks to the director.

Related to Film of the week: 45 Years