Teaming up with street artist JR, the legendary director goes in search of friends new and old in this intuitive caper, which veers between moments of collective joy and great personal poignancy. 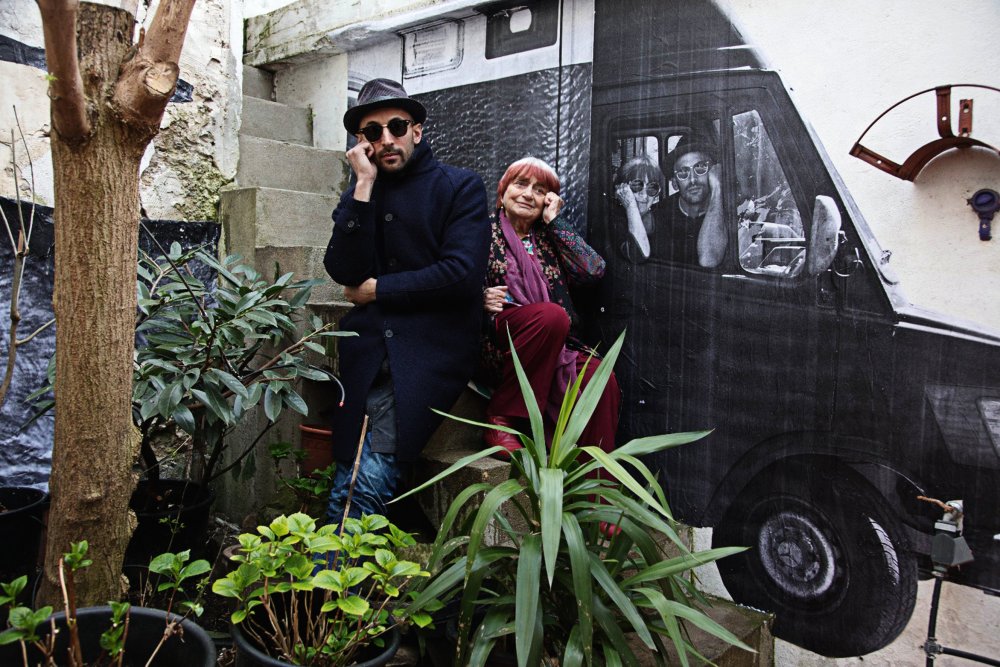 Agnès Varda and JR hit the road in Faces Places (2017)

Agnès Varda has always delighted in conversation and connection. The credits for her first feature, back in 1955, read: “A film by Agnès Varda and the inhabitants of La Pointe Courte.” Later, together with the likes of Chris Marker and William Klein, she would be one of the contributors to the agitprop nonfiction work Far from Vietnam (1967). Her social documentaries, among them Daguerréotypes (1975) and The Gleaners and I (2000), seem to be made with – as much as about – her subjects. They’re puckish and associative, crinkle-eyed rather than clinical, both lyrical and convivial.

It’s a little surprising, then, that Faces Places is her first directorial collaboration. It’s perhaps even more surprising that her partner is JR, the French street artist whose practice involves taking black-and-white portraits that he then prints in large format before flyposting them on building exteriors. Many of his projects, such as Women Are Heroes, in which he pasted the faces of local women on to the houses of a Rio favela, have been widely reproduced. Arresting though they are (and sometimes politically potent – a 2014 march in New York against police brutality was led by protesters carrying JR-designed banners featuring the eyes of Eric Garner, who was placed in a fatal chokehold by an arresting officer earlier that year), they can seem, at least in their pixelated travels across digital media, to be grabbily one-dimensional, bereft of the layers and grace notes in Varda’s films.

Characteristically, Varda herself is more generous. Her own interest in public art goes back at least as far as Mur murs (1980), her wonderful exploration of the craft and symbolism of large murals in Los Angeles – many of them in Mexican neighbourhoods – which ranks alongside Manfred Kirchheimer’s Stations of the Elevated (1981) as one of the most revealing documentaries about outside-the-white-cube American painting. When JR tells Varda how important her film was to him, she reels off a list of his projects – involving older women in Cuba; industrial complexes in France; the Pantheon, a resting place for the great and good in Paris, which he populated with images of the general public – that she loves. 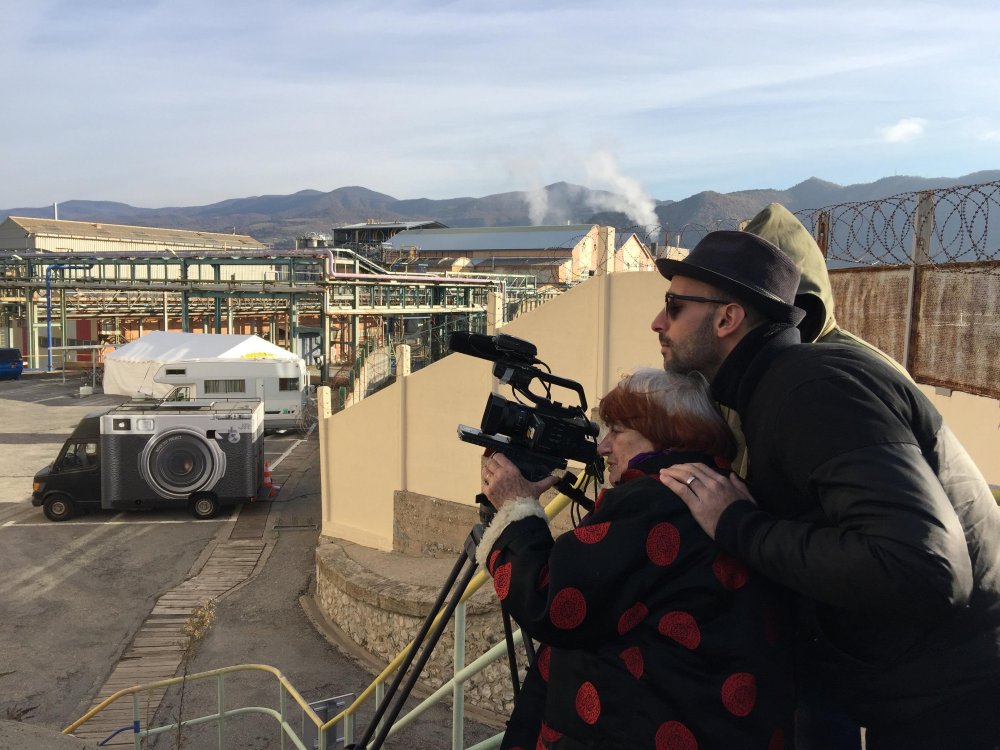 Still, they make for an odd couple. He’s in his thirties, she’s half a century older. He’s tall and jumpy, she’s small and struggles to climb staircases. He never allows himself to be photographed without his shades, while she has eyes as beady, mysterious and wise as those of her cats. It’s easy to imagine arts broadcasting commissioners bringing them together for an intergenerational powwow, an opposites-attract road movie. Winsome acoustic music and cute, Etsy-ish graphics at the start of the film suggest the worst.

Both participants, however, are shrewd about characterisation: JR laughs at the idea of Varda as a “wise grandma”; she describes him as a “spirited young man”. What unites them is their shared passion, expressed in different ways, for trying to represent the kind of people who tend, even in a visually saturated era, not to be represented. “My greatest desire,” Varda tells JR, “is to meet new faces and photograph them so they don’t fall down the holes in my memory.” 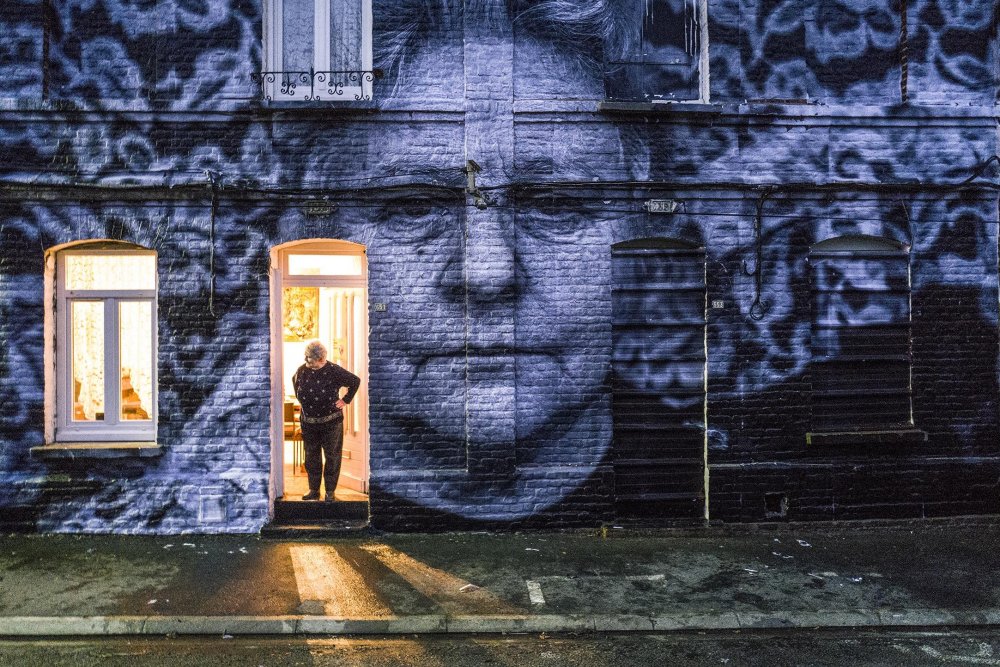 The France they travel through seems at first sight to be nothing special. They drive to backwaters, to unremarkable factories, to villages that have seen better days. Early on they visit a row of miners’ houses that has been slated for demolition and where only one tenant – Jeanine – still lives. Her refusal to budge is part of what attracts them to her, but also her stories that are rich in fond, vivid details; she recalls not only the butter-baguettes her father would eat down the pit, but how delighted she and her siblings would be whenever he returned home and offered them the soot-coated, half-eaten leftovers.

In another section, JR and Varda meet a farmer who tells them that, where once four or five people worked the fields, now it’s just him in charge of 2,000 acres. “We’ve grown antisocial,” he says. In the hands of documentarians such as Thom Andersen or Allan Sekula and Noël Burch, this would be the cue for a strident critique of anomie and alienation in modern agronomics; here, the farmer says he not only enjoys driving his hi-tech tractor but also likes operating in isolation. 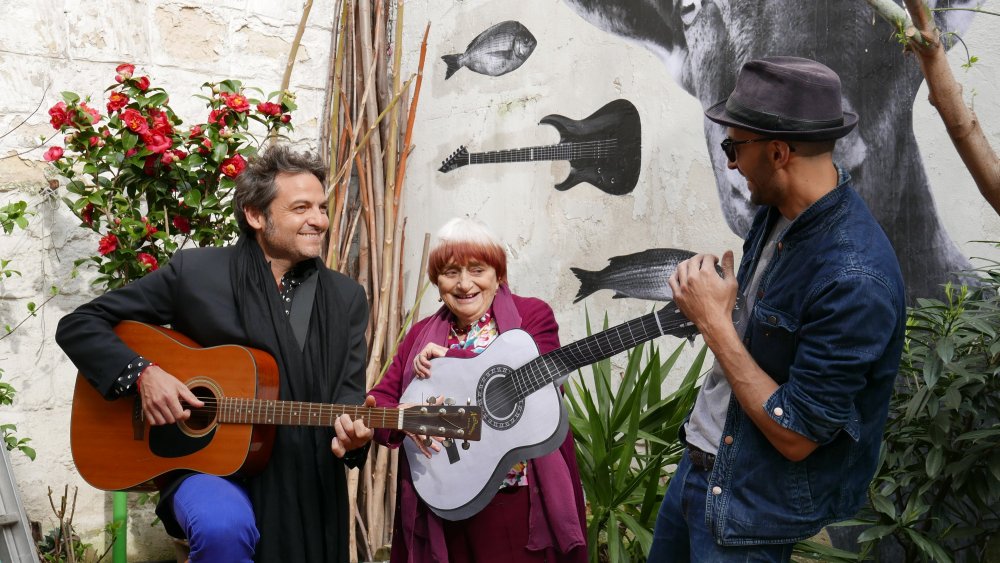 Politics of the left-humanist and gently anarchist persuasion inform almost everything – there is a sketch of an erratically toothed old gent named Pony who creates art using discarded bottle tops and lives in an attractive tent home where he feels free; there’s a profile of a woman dairy farmer who mourns the modern fashion to cut off goat horns – nominally this is done to protect them from fight wounds but really to make them “docile and obedient for the milk machines”.

On they drive. Past hills and fields, flowers and hay. Through winds and seasons. Favourite motifs – potatoes, postcards, cats – crop up. Conversations trigger other conversations. Each memory opens a doorway to other memories. Varda and Maxime Pozzi Garcia’s editing – full of space, visual echoes, ruminative drift – ensures that the film never feels like a mere compendium of encounters or site-specific dialogues; rather, it helps to deliver those qualities that Varda, speaking to journalist Andrea Meyer in 2009, hopes characterise her films: “A woman working with her intuition and trying to be intelligent. It’s like a stream of feelings, intuition, and joy of discovering things.” 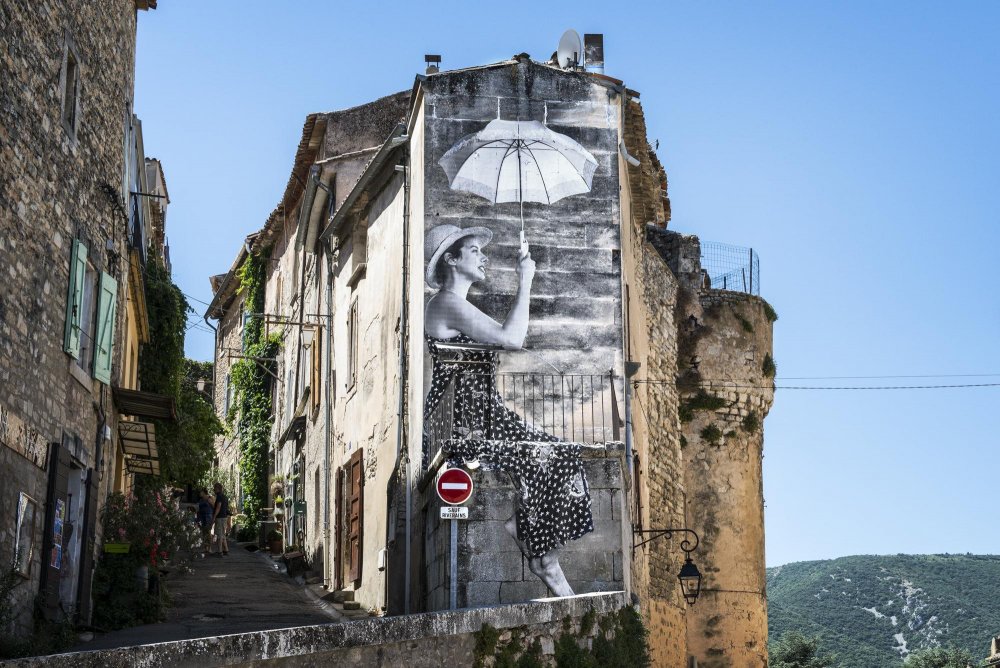 As much as it’s a journey, Faces Places is also a documentation of JR’s projects and interventions. It offers a series of thought experiments on how to conceptualise walls and space more broadly. In Mur murs, Varda described murals as “living, breathing, seething walls… as talking, wailing, murmuring walls”. Here the walls are seen as facilitators of, rather than barriers to, communication. At one chloride facility the filmmakers visit, the staff reveal that they rarely get to be together because they work different shifts; JR and Varda’s response is to create and display a group poster in which – fleetingly and tantalisingly – they form a collective body.

Elsewhere, photographed fish are elevated to the side of a water tower; children tickle the paper toes of a waitress; Varda’s eyes and feet are stuck to train carriages. There’s a whimsicality at play here, a palpable sense of JR and Varda as diviners – visionaries capable of animating hard, inert surfaces and drawing out their potential to be tactile and malleable sources of delight. For all that, JR’s work is itself vulnerable to time and weather. One of the most poignant sequences is shot on a beach, where Varda tries to recreate an image of her friend Guy Bourdin; artfully pasted on a fallen German bunker, it is washed away overnight by the tide. 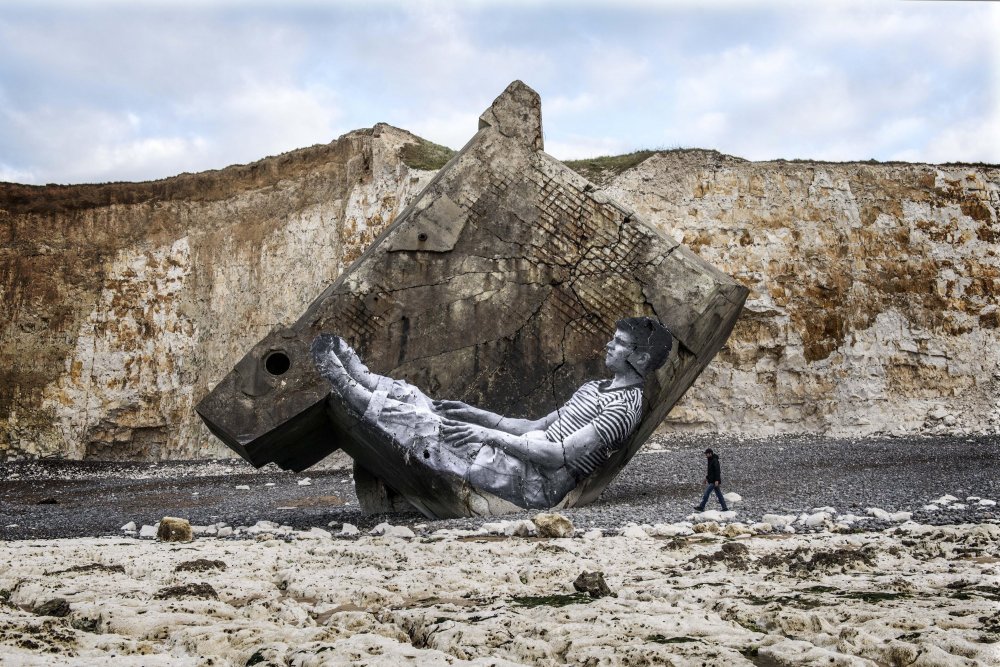 There are other reasons to be wistful or even gloomy in this film. Foremost among them, of course, is Jean-Luc Godard, like JR an artist who prefers to hide behind dark glasses, but also a long-term friend of Varda and her deceased husband Jacques Demy. She cast him alongside Anna Karina in a silent-comedy pastiche that appeared as an insert in Cléo from 5 to 7 (1962) and trumpeted the importance of looking loved ones in the eye. Godard himself fails – or refuses – to do just that in Faces Places. The impact, especially in a film so warm and empathetic, is genuinely upsetting.

“You see blurry and you’re happy,” JR tells Varda at one stage. Her ailing eyesight, which necessitates wince-inducing injections, is one of the through lines. Yet what makes the pair’s collaboration so tart and pleasing is precisely its lack of blurriness. It’s alert to the fragility of social solidarity, but shows how paper, paste and the human imagination can create transient shrines to those virtues. It honours old friends such as Nathalie Sarraute and Henri Cartier-Bresson who have passed away, but also gleefully introduces us to eccentric postmen and JR’s centenarian grandmother.

Faces Places is a wonderful exercise in memory and merriment, in instinct and improvisation. “The idea of you directing my toes delights me,” Varda tells JR as he photographs her feet. “I’ll play along.” No filmmaker alive today plays as delightfully as Varda does.