Andrea Arnold hits the highway with American Honey, and we answer the question “What kind of dames thumb rides?” Plus the extraordinary career of Kirk Douglas, John Carpenter on his love of Hammer and Howard Hawks, Víctor Erice’s tantalising El sur, Ira Sachs’ Little Men and a recent quartet of limp Hollywood war satires. 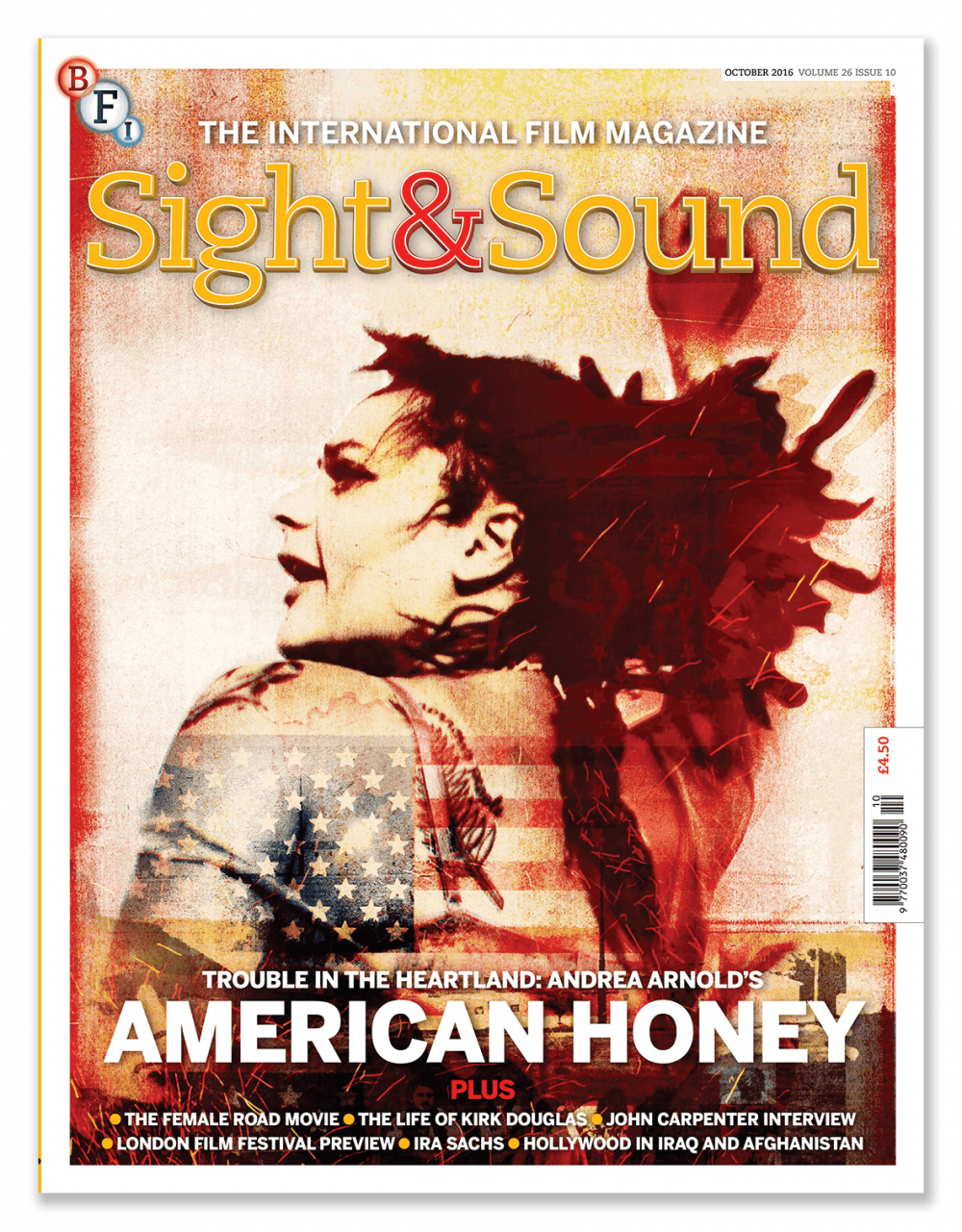 Rev your engine, roll the windows down and join our open-road odyssey this issue as we talk to Andrea Arnold about her latest film American Honey. Here Arnold leaves behind the British landscapes of Wasp, Red Road, Fish Tank and Wuthering Heights and takes a road trip into the poverty-stricken hinterlands of the US. The film’s American honey is Star, a tenacious 18-year-old loner who wants more from life than playing makeshift mother to two siblings and so joins a ragtag door-to-door sales crew who party and drive their way across the Midwest. In our cover feature Simran Hans explores Arnold’s ongoing exploration of class and female sexuality and talks to the director about discovering her lead and first-time actor Sasha Lane, shooting personal, intimate films in Academy ratio and why all her films have sex scenes.

Cruising alongside, Kim Morgan takes a ride through film history and finds that any assumptions that the road movie is a male genre is a dead end; the road has been a place for cinematic escape, discovery and crisis for many women on screen. “What kind of dames thumb rides?” asks Tom Neal in Edgar G. Ulmer’s Detour. It turns out all kinds, from Claudette Colbert in It Happened One Night (1934) to Quentin Tarantino’s feminist rebels in Death Proof (2007).

Elsewhere, we celebrate the extraordinary career of Kirk Douglas; discuss Little Men with Ira Sachs; explore Víctor Erice’s tantalising incomplete 1983 film El sur; talk to John Carpenter about his love of Hammer and Howard Hawks; and interrogate a recent quartet of limp Hollywood war satires. Plus all the regular reviews of latest releases and more… 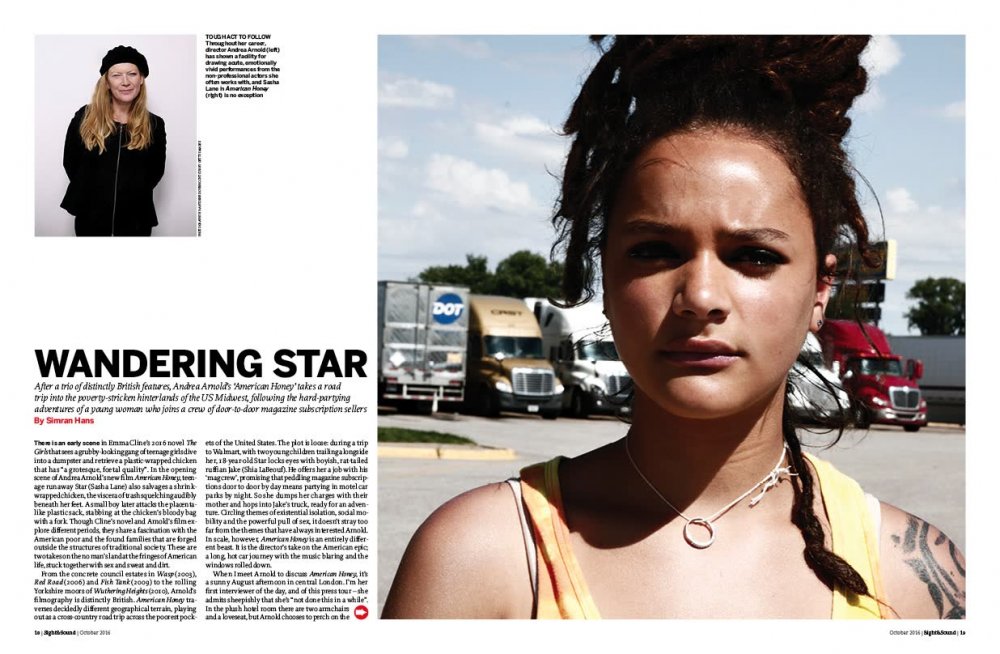 After a trio of distinctly British features, Andrea Arnold’s American Honey takes a road trip into the poverty-stricken hinterlands of the US Midwest, following the hard-partying adventures of a young woman who joins a crew of door-to-door magazine subscription sellers. By Simran Hans. 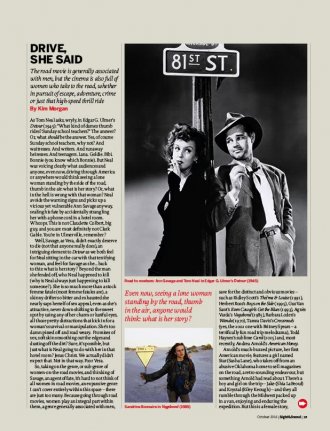 The road movie is generally associated with men, but the cinema is also full of women who take to the road, whether in pursuit of escape, adventure, crime or just that high-speed thrill ride. By Kim Morgan. 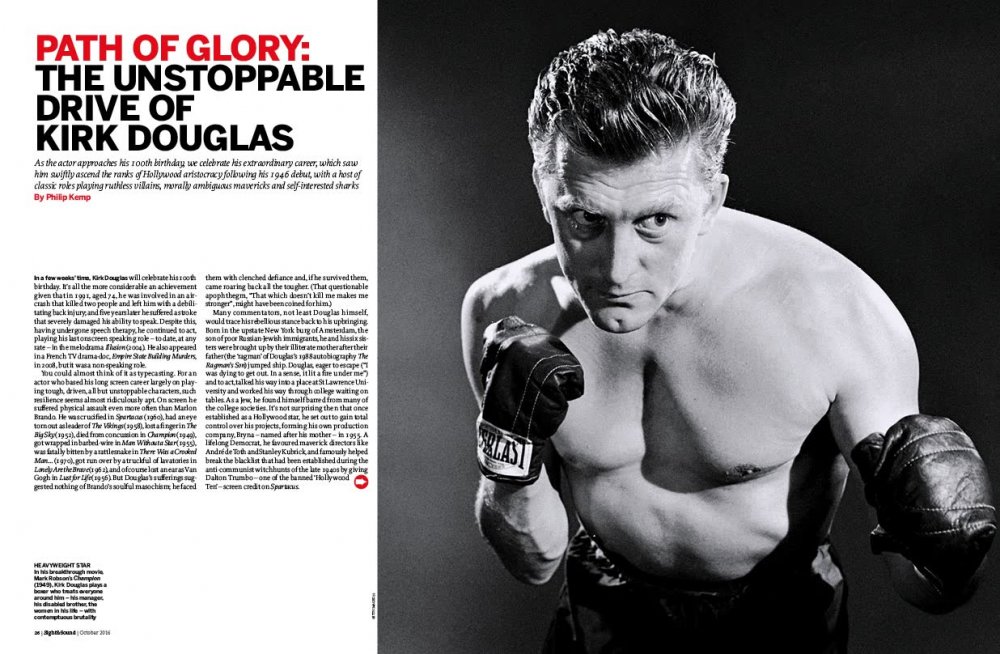 Path of Glory: the Unstoppable Drive of Kirk Douglas

As Kirk Douglas approaches his 100th birthday, we celebrate his extraordinary career, which saw him swiftly ascend the ranks of Hollywood aristocracy following his 1946 debut, with a host of classic roles playing ruthless villains, morally ambiguous mavericks and self-interested sharks. By Philip Kemp. 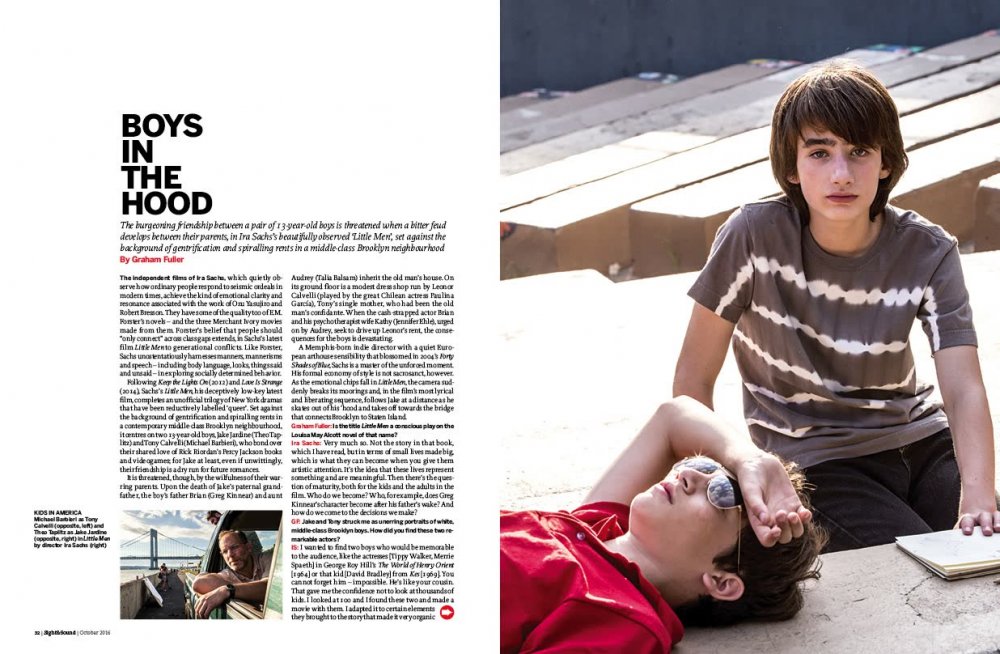 Boys in the Hood

The burgeoning friendship between a pair of 13-year-old boys is threatened when a bitter feud develops between their parents, in Ira Sachs’s beautifully observed Little Men, set against the background of gentrification and spiralling rents in a middle-class Brooklyn neighbourhood. By Graham Fuller. 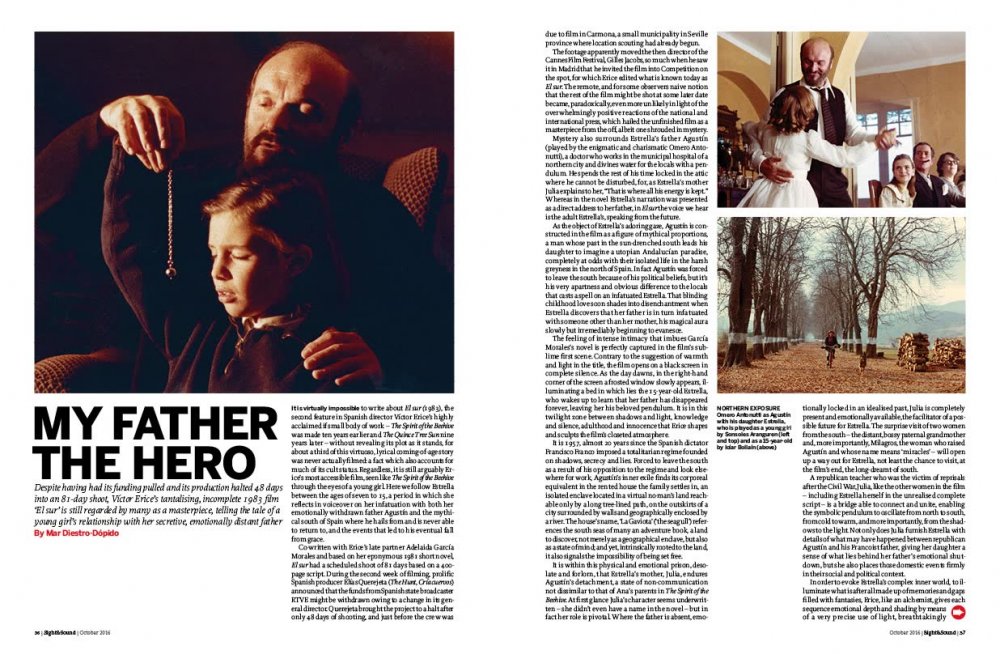 My Father the Hero

Despite having had its funding pulled and its production halted 48 days into an 81-day shoot, Víctor Erice’s tantalising, incomplete 1983 film El sur is still regarded by many as a masterpiece, telling the tale of a young girl’s relationship with her secretive, emotionally distant father. By Mar Diestro-Dópido. 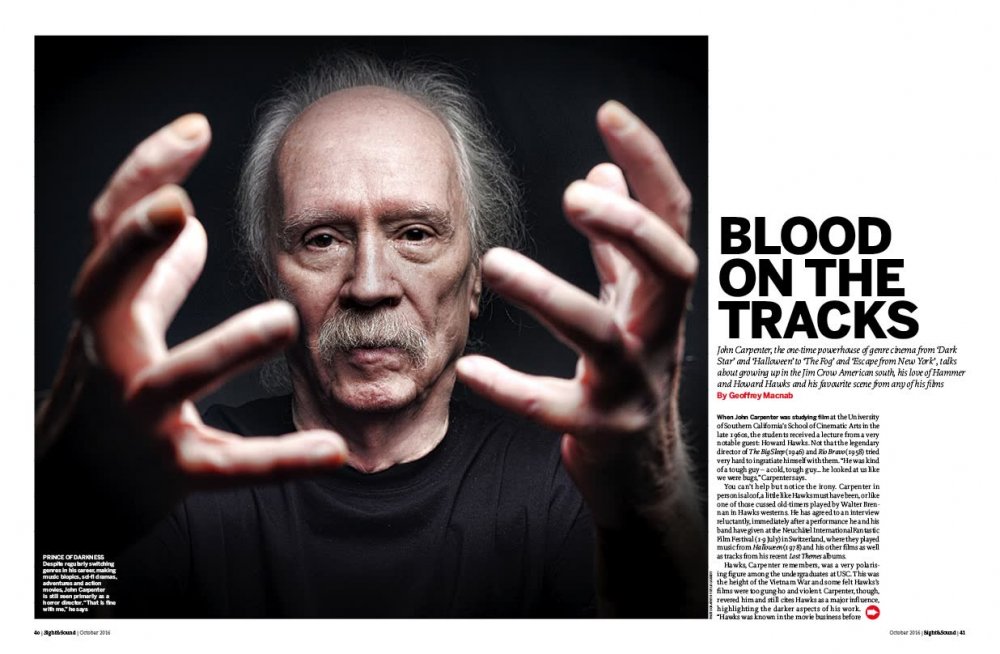 Blood on the Tracks

John Carpenter, the one-time powerhouse of genre cinema from Dark Star and Halloween to The Fog and Escape from New York, talks about growing up in the Jim Crow American south, his love of Hammer and Howard Hawks and his favourite scene from any of his films. By Geoffrey Macnab. 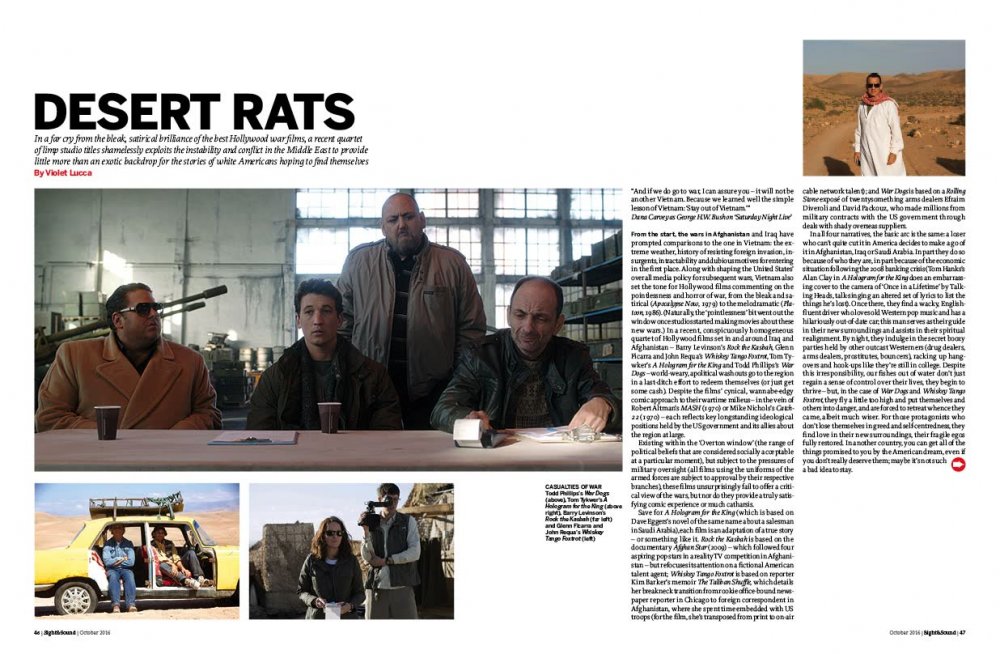 In a far cry from the bleak, satirical brilliance of the best Hollywood war films, a recent quartet of limp studio titles shamelessly exploits the instability and conflict in the Middle East to provide little more than an exotic backdrop for the stories of white Americans hoping to find themselves. By Violet Lucca. 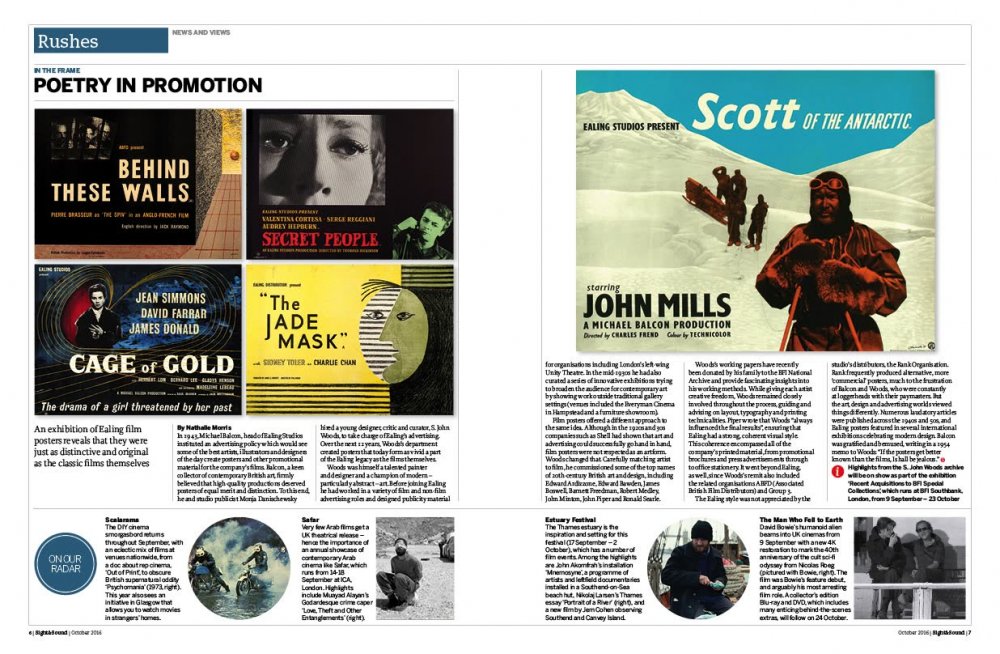 In the frame: Poetry in promotion

An exhibition of Ealing film posters reveals that they were just as distinctive and original as the classic films themselves. By Nathalie Morris.

In the world of film – the world of the image – the manuscript can be a token of irrelevance or a source of meaning. By Hannah McGill.

With her first feature, Baden Baden, and with her day-job in the French army, director Rachel Lang overturns expectations. By Isabel Stevens.

Interview: The horror of war

In Under the Shadow Babak Anvari uses his childhood memories of the Iran-Iraq war as the backdrop to a different kind of horror. By Olivia Howe.

With a focus on black talent and an S&S Gala presenting the film of 2016, this autumn’s festival is set to be one of the most exciting in years. By Nick James.

Dispatches: A study in Scarlett

With her languorous grace and cool reserve, Scarlett Johansson is a screen goddess at one remove from the Hollywood mainstream. By Mark Cousins. 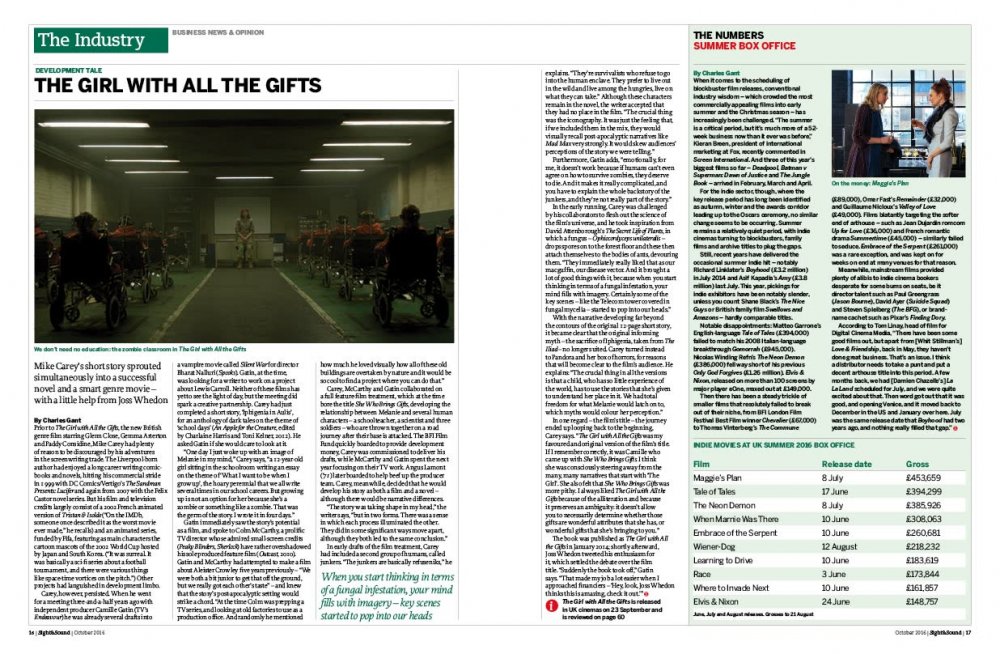 Development tale: The Girl with All the Gifts

Mike Carey’s short story sprouted simultaneously into a successful novel and a smart genre movie – with a little help from Joss Whedon. By Charles Gant.

The summer’s indie movies at the UK/Ireland box office. By Charles Gant. 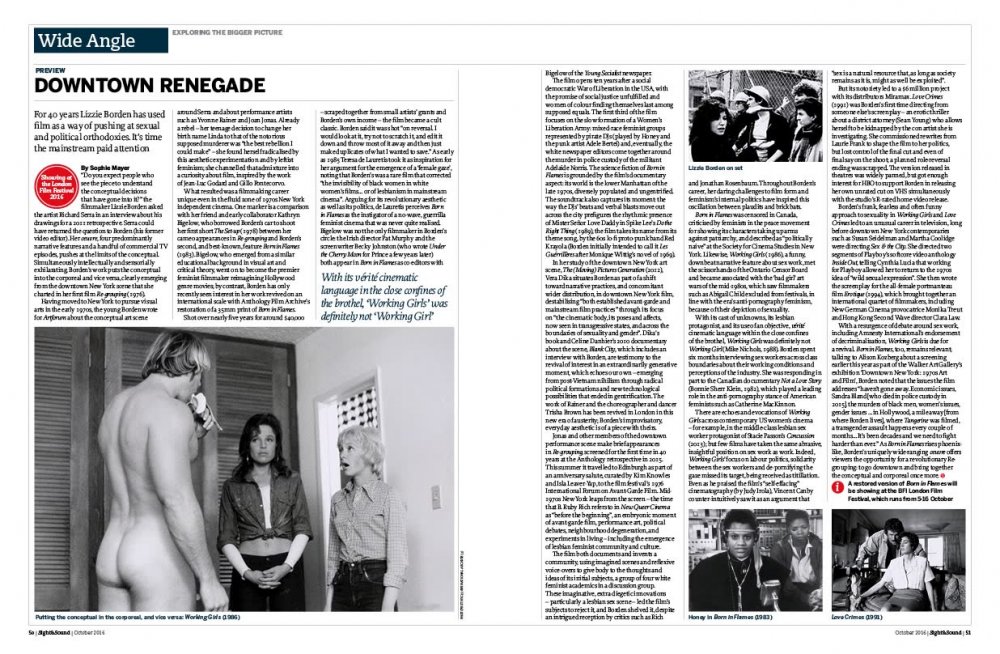 For 40 years Lizzie Borden has used film as a way of pushing at sexual and political orthodoxies. It’s time the mainstream paid attention. By Sophie Mayer.

In Italian post-war cinema, dubbing dialogue was standard practice – and for the best directors, it was an artistic resource. By Sam Davies.

What is the link between early British talkies and goats’ testicles? A new restoration makes the connection plain. By Geoff Brown.

Always daring, this year the Locarno festival pushed the boat out, with films that defied critical categories. By Kieron Corless. 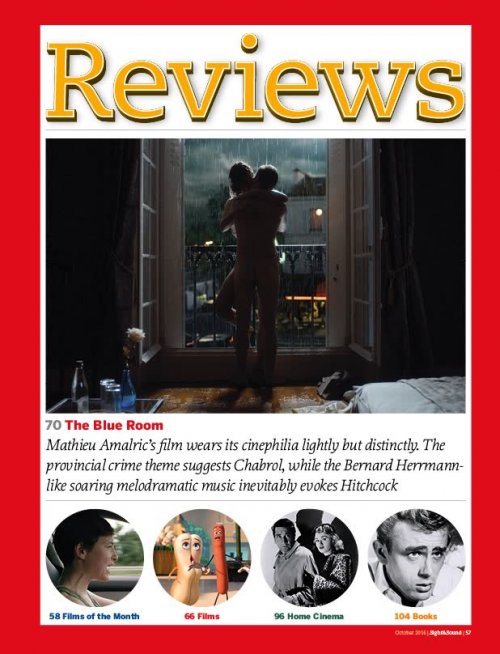 Aloys
Ambulance
Bad Moms
The Beatles: Eight Days a Week – The Touring Years
Ben-Hur
Blair Witch
The Blue Room
The Brother
Captain Fantastic
The Clan
Courted
Dare to Be Wild
The Fencer
The First Monday in May
Free State of Jones
Gary Numan: Android in La La Land
The Greasy Strangler
Hell or High Water
Hunt for the Wilderpeople
Imperium
The Infiltrator
Kubo and the Two Strings
League of Gods
Life on the Road
Little Men
The Lovers & the Despot
Nine Lives
The 9th Life of Louis Drax
Sausage Party
Sour Grapes
Southside with You
Suicide Squad
Supersonic
Tharlo
Two Women
Under the Shadow
War Dogs
War on Everyone 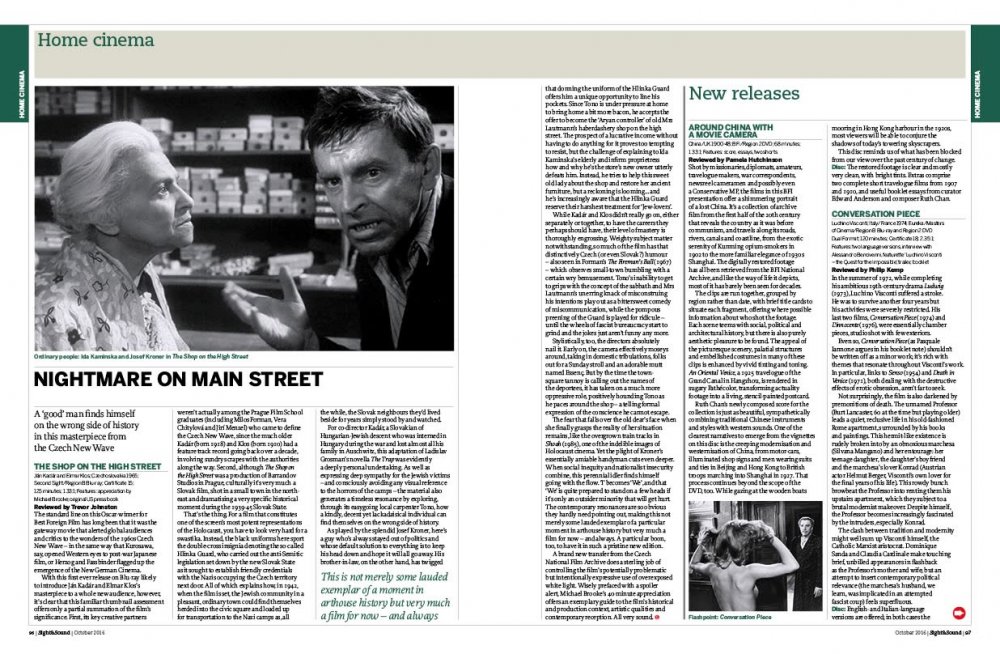 Nightmare on Main Street: The Shop on the High Street

A ‘good’ man finds himself on the wrong side of history in this masterpiece from the Czech New Wave. By Trevor Johnston.

Heroes are hard to find in a William Wellman western that’s so dark it even has Henry Fonda in an unsympathetic role. By Philip Kemp.

The roots of Buster Keaton’s comic style can be traced to a series of surprisingly sophisticated two-reelers made with Roscoe Arbuckle. By Pamela Hutchinson.

Lost and found: Give Us This Day

This near-noir drama of working-class life hints at the kind of career Edward Dmytryk might have had if he’d remained in exile in Britain. By Fintan McDonagh. 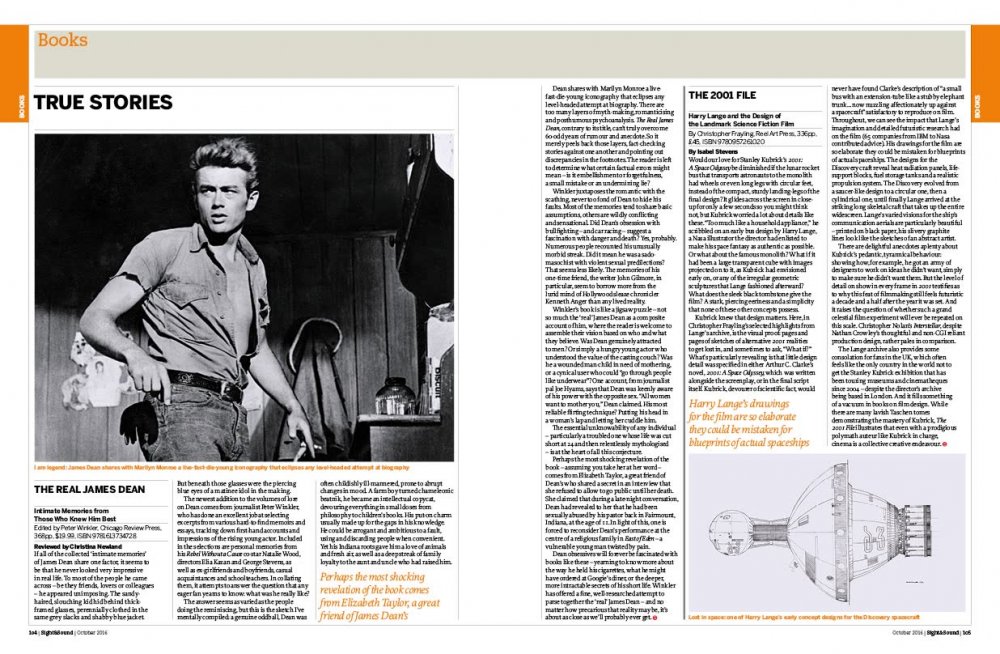 The Real James Dean: Intimate Memories from Those Who Knew Him Best edited by Peter Winkler (Chicago Review Press) reviewed by Christina Newland

The 2001 File: Harry Lange and the Design of the Landmark Science Fiction Film by Christopher Frayling (Reel Art Press) reviewed by Isabel Stevens

The Man from the Third Row: Hasse Ekman, Swedish Cinema, and the Long Shadow of Ingmar Bergman by Fredrik Gustafsson (Berghahn Books) reviewed by Nick Pinkerton 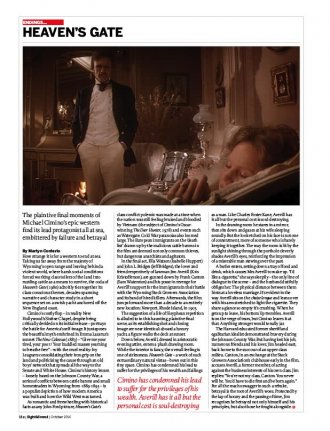 The plaintive final moments of Michael Cimino’s epic western find its lead protagonist all at sea, embittered by failure and betrayal. By Martyn Conterio.