Forty years after Lizzie Borden screened then put away in the closet her radically feminist, reflexive portrait of four artists in a women’s group, the film has more to say to us than ever.

☞ See also A festival in the crowd: some highlights of Edinburgh 2016 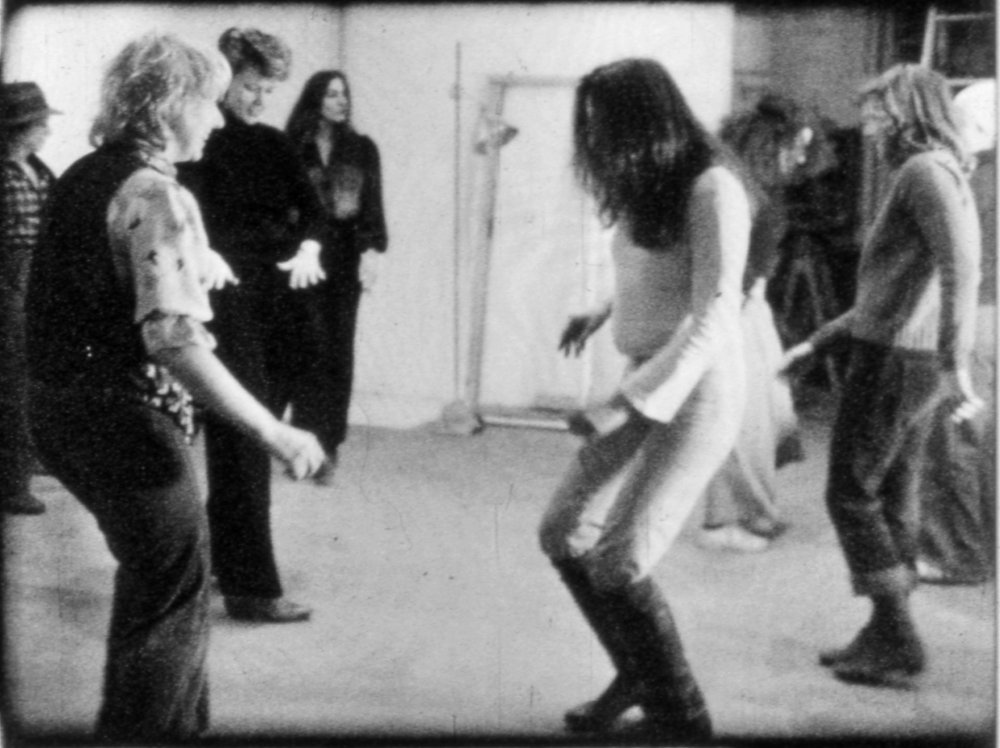 Writing from the UK premiere of Lizzie Borden’s Regrouping, Jonathan Rosenbaum referred to “this diabolical hour of film” – but he also borrowed its title for his Reflections on the Edinburgh Festival 1976, the lead article for Sight and Sound’s Winter 1976/77 issue.

The 40th anniversary screenings of Regrouping and a complementary panel discussion were amongst the centrepieces of the 2016 Edinburgh Film Festival’s 70th anniversary celebrations.

Rosenbaum’s essay, reviewing the festival’s International Forum on Avant-Garde Film, wrestles with his sense of identifying with both insiders and outsiders to this heady moment in film history in which the filmmaking avant-garde and cutting-edge film theorists were directly in conversation as a counter-cinema was celebrated. “I feel more like an ambassador from a neutral country, visiting one of the two Major Powers in the midst of a cold war,” he concludes. While he finds Yvonne Rainer’s Kristina Talking Pictures (1976) “side-splitting”, praising Rainer’s oeuvre as “gems” that keep “creating and dismantling the pleasures of illusionism and continuity at the same time”, he is “not sure whether [he] ‘like’[s] Lizzie Borden’s Re-Grouping [sic], but [is] less sure whether this matters”. 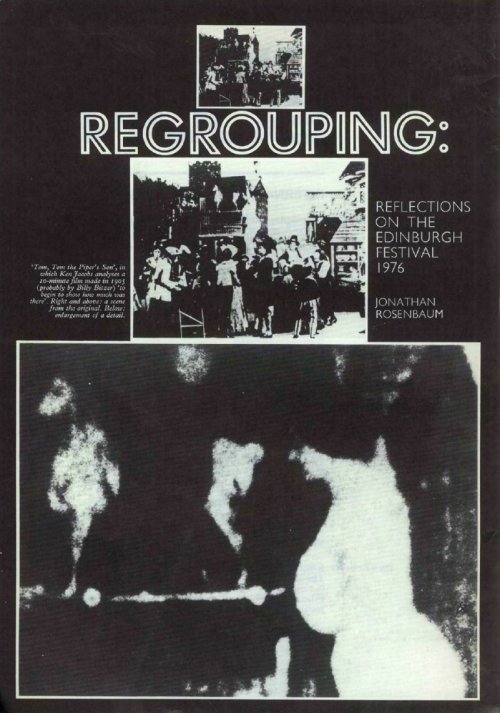 Jonathan Rosenbaum’s cover feature on Regrouping in our Winter 1976-77 issue. Read it via our subscription digital archive.

In 1976, Rainer’s films and Borden’s offered context for each other as feminist experiments – but also served as notice of a regrouping within the broader avant-garde; notably, they were two of the few female filmmakers in the programme. Only a year after Laura Mulvey’s call for a feminist counter-cinema in Visual Pleasure and Narrative Cinema, Borden’s and Rainer’s films appropriate techniques from the (perhaps more feminist) performance-art avant-garde, including Borden’s use of re-performance and repeated gestures, and her focus on the body, blending them with strategies from across the history of the cinematic avant-garde.

As Rosenbaum describes – through observing the film’s fadeouts to white, overlapping voices which move in and out of synch with the visuals, jump cuts and other distancing devices – one realises that Borden’s title refers not only to the social patterning that forms the film’s ostensible and elusive subject, but also its own manner of presentation.

Mulvey, participating in a day of talks that framed the Edinburgh 2016 retrospective screening of Regrouping – its first since 1976 – said of the black-and-white 16mm cinematography that she “was really surprised by its beauty, by the images and their tactility”. The film’s lustrous visual pleasures, apparent to contemporary viewers, reframe Rosenbaum’s puzzle as to whether the film “asks to be liked”: it asks to be loved, but first it had to create an audience able to love it. This reclamation of visual pleasure – both cinematic and cinephilic – responds to Rosenbaum’s foresight in finding it “bewildering to read about the Psychoanalysis Event afterwards in the national press, where one learned that ‘the “pleasure principle” is strictly outlawed from critical practice’”. 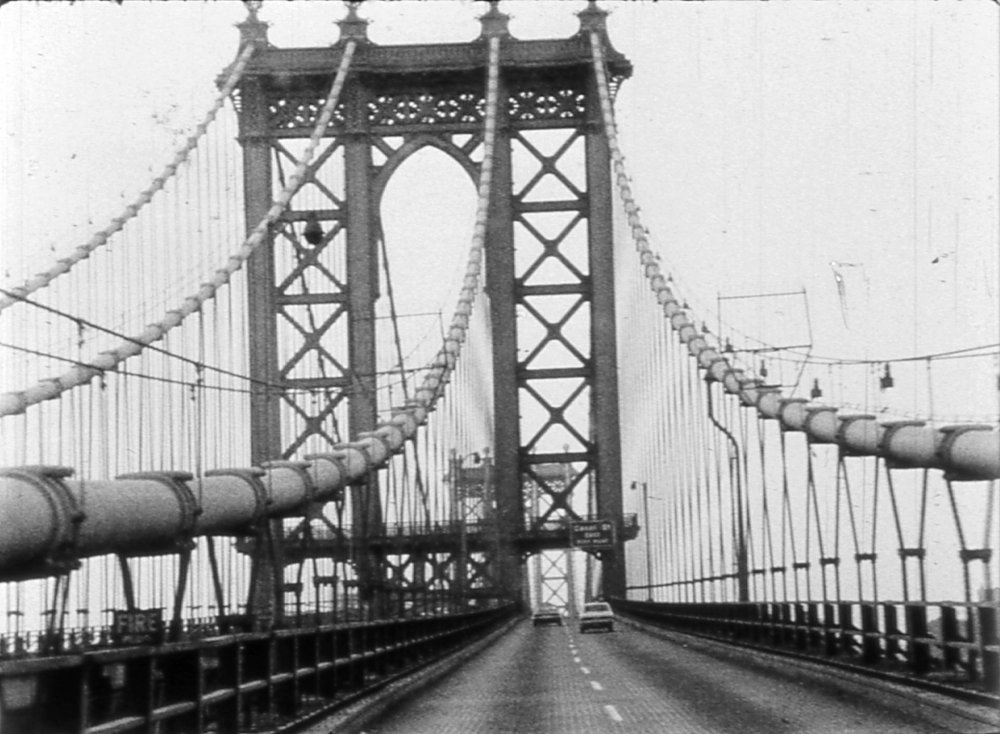 If Rosenbaum is a neutral country, then – as he observes – Regrouping is a bridge between the wild shores of the avant-garde forum and the 1976 festival’s other major strand, the Psychoanalysis and Cinema event, even though it “never gets mentioned” at the latter. Its avant-garde play with form offers, for him, a more acute reflection of the complex Lacanian terms under discussion (which he footnotes) than the majority of films programmed, although he salutes the screening of Chantal Akerman’s Jeanne Dielman (1975). He observes that as Borden’s film “dissolv[es] ‘form’ and ‘content’ into an impenetrable labyrinth… [it] foregrounds the concerns of the Psychoanalysis and Cinema Event in a way that Hollywood movies clearly cannot – by referring directly to its own productions and suppressions of meaning.”

Its production and suppression of meaning would become strikingly literalised after the festival: as Rosenbaum notes, the women who are the initial subjects of the film called the work “‘sexist’ and ‘reactionary’,” prompting Borden to put the 16mm reels in her closet for 40 years. Borden notes in the opening intertitles that the “film began as an agreement, an attempt at collusion” with the group of four white artists and intellectuals, whose opinions (including as to whether it is “A Film by Lizzie Borden”) on her initial footage are heard on the soundtrack. But “the terms of the film changed… more and more, it became my film; I was using them as raw material.” 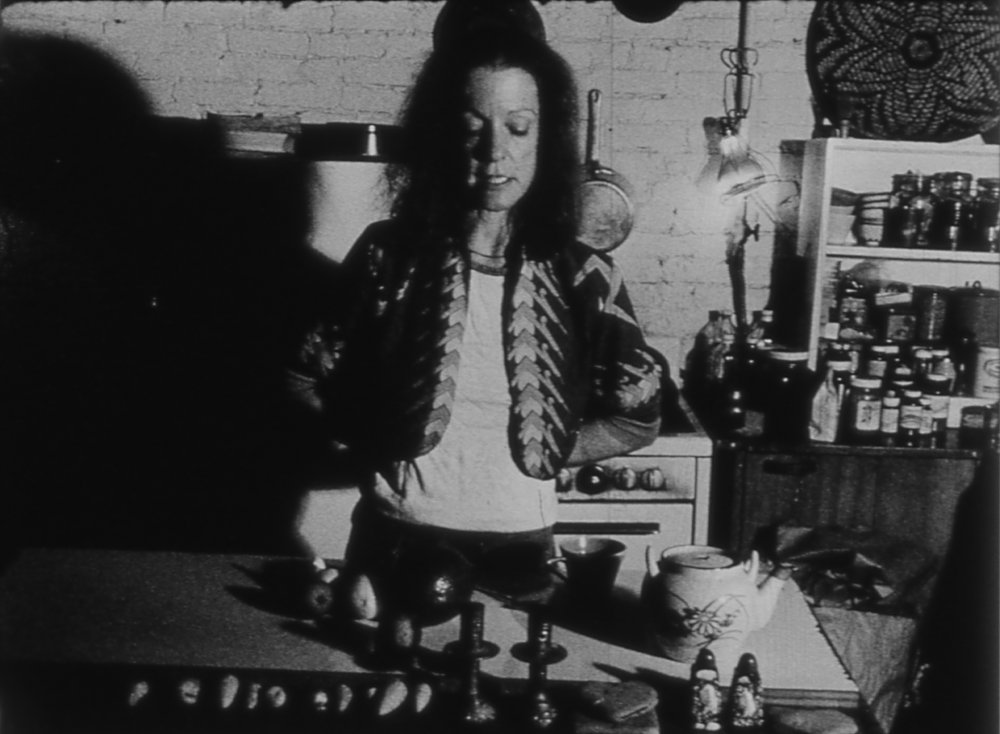 It was this shift that – despite evidence of the group’s continued involvement being literally recorded by the film’s soundtrack – produced the charges Rosenbaum heard delivered in Edinburgh by a New York critic speaking on behalf of the women’s group. Yet the film is open about the re- in its regrouping, dissolving both form and content in a dazzling kaleidoscope. Towards the end, after an intertitle tells us that the women’s group broke up and reconvened, there is a sequence showing the women dancing casually in a studio, like a nod to Rainer’s choreographic work for Judson Dance. “We no longer demand a consensus,” says a voice on the soundtrack, speaking for the film’s project. “We no longer have to be agreeable.” It still resonates as a daring claim 40 years later, as self-proclaimed fourth-wave feminism confronts similar issues of generating solidarity while acknowledging difference.

What Rosenbaum perceives as an “ungraspable subject, a perpetual ‘work-in-progress’ on the spectator that is never resolved or completed” may have found its moment, 40 years on: as feminism has shifted away from essentialism to the potent idea of the unstable, ‘ungraspable subject’, so too has documentary. Borden started shooting in 1974, amid the emergence of second-wave feminism and its close relation to cinéma vérité and the confessional documentary; Regrouping feels closer to cutting-edge real-time online documentation, a rolling and multi-layered Periscope live-feed from the heart of the nascent radical feminist movement. The ethics of shaping one’s subjectivity on camera may feel more familiar, urgent and comprehensible for contemporary viewers than they did in 1976. The film proffers visionary thought for a time in which we are sometimes taken out of context or held to account on social media as part of the process of constantly documenting ourselves and our political formations.

With uncanny – or perhaps informed – timing, Regrouping had (literally) its first retrospective at Anthology Film Archive in 2015, alongside the 35mm restoration of Borden’s better-known film, the legendary 1982 feminist Afrofuturist science-fiction film Born in Flames, which has assumed a prophetic stature. Both films feature artist and future filmmaker Kathryn Bigelow in small roles (as a voice on the soundtrack in Regrouping), which suggests a counter-history of how close the “diabolical” propositions of the avant-garde came to infiltrating Hollywood cinema.

Born in Flames is the more narrative film, but Borden talked in the post-screening discussion about both films being choral, shifting away from the singular subject towards the “ungraspable” feminist question of how to find common ground between women. In particular, she noted that the four educated white women in the group would talk about labour and the marketplace in the abstract, so she interjected shots that capture diverse women at work in supermarkets and offices, and playing sports, to give some concrete grounds to the discourse. There’s a particularly striking shot in which a small group of women of colour enter an elevator, turning to face the camera as they do, that feels like the seed of Born in Flames sprouting through Borden’s absorption of, and frustration with, Regrouping’s subjects’ ideas. Like the white socialist played by Bigelow in Born in Flames, Borden the filmmaker shifts her initial allegiance from the small, talkative group of white women to an active and activist world outside.

Bigelow is not the only prominent feminist who became involved with Regrouping as Borden made the material her own, with staged scenes involving artists such as Joan Jonas and Barbara Kruger, who were on the cusp of art-world fame. These staged scenes make reference to Maya Deren’s At Land and to Fluxus happenings, and deconstruct representations of women from across the history of Western art; Borden, like Bigelow, was a visual-arts student and painter. These twin presences – of the feminist avant-garde and of the history of visual culture – mark Regrouping’s place in the trajectory of avant-garde and artists’ film; where Rosenbaum records “strains of information”, contemporary viewers may hear, from within our information-overload culture, the kind of overlapping cascades of sound audible in Sarah Turner’s Public House (2016).

There’s one particular “strain” that Rosenbaum struggles to hear fully; he mentions “a lot of talk about a woman named Susan who died while the film (or ‘film’) was being made,” but not that part of Susan’s influence on the group was her articulation of lesbian sexuality. The figurative absence, or mishearing, of Susan’s role in Rosenbaum’s review may be the cue for the descriptor ‘diabolical’, perhaps a coded reference to Henri-Georges Clouzot’s Les Diaboliques (1955), which Judith Mayne reads in Framed as offering “a brief but tantalising suggest[ion of] both the evocation and the repression of lesbian desire – perhaps not a full-blown plot, but something more than a sub-plot”. In Regrouping, relationships between women, and the patriarchal conspiracy that prevents women from finding common ground, are elevated to full-blown plot.

A voiceover comments that “women in our society have never had an opportunity to form relationships with each other,” and the film, as it reroutes from observational documentary, playfully yet rigorously puts into question the original group’s anxiety about lesbianism. As B. Ruby Rich noted in her 1979 article Sex and the Cinema, from the group’s perspective, “probably the film’s most damning scene was one of two women making love, matched to a sound track of a third woman describing how disgusting she found making love with a woman to be.”

Looking at the film within the context of “the current [late 1970s] sensitivity surrounding the depiction of women’s sexuality in cinema,” Rich admires that “Borden confronted the whole issue of cinematic voyeurism straight on by making a film that is unabashedly voyeuristic as hell.” As well as the creatively filmed, extended scene of two women making love (which Borden filmed at her apartment, with two friends who volunteered to take part) the film includes several sequences shot in communal showers – at crotch level. “Pubic hair, everywhere!” Borden laughed in the regrouped 2016 discussion, offering a final comment on one of the few, visible differences between the 1970s and the present. We need – and, I would argue, understand – the film even more than Rosenbaum did in 1976.

Correction (22 July 2016): this review originally claimed that Borden began shooting Regrouping in 1972, suggesting a four-year process to release. In fact she began in 1974, as has been amended.

Lizzie Borden’s Born in Flames is noted for its post-punk music but its soundtrack’s array of female voices is just as fascinating, says Frances Morgan.