Joel and Ethan Coen on folk music, success and Inside Llewyn Davis, plus Steve McQueen on 12 Years a Slave, Martin Scorsese’s American black farce The Wolf of Wall Street, Robert Altman’s The Long Goodbye and the S&S Interview with George Romero. In print and digital from 3 January. 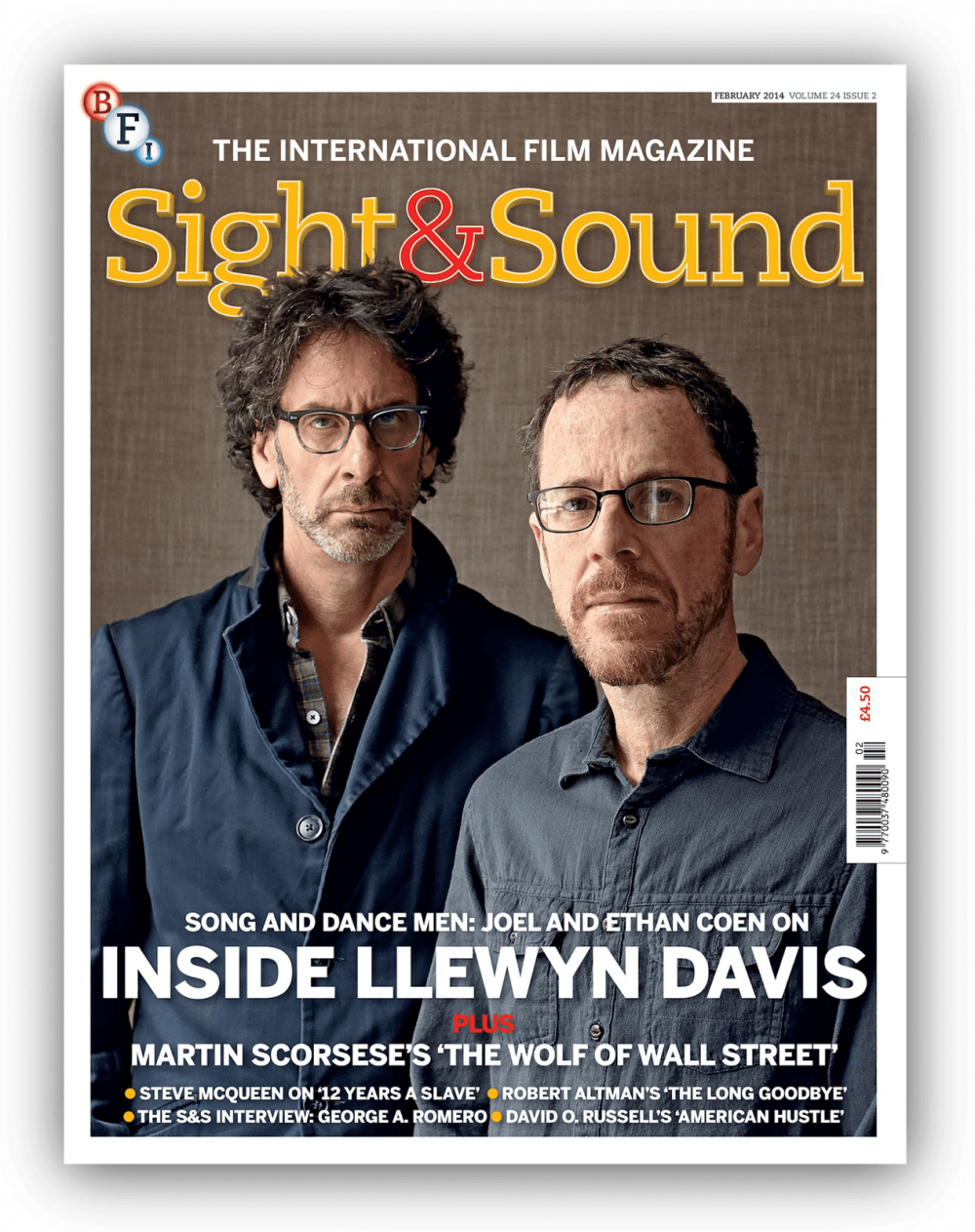 The mechanics of dramatic empathy are as ironic as just about everything else in the world of the Coen brothers, our February cover interviewees. Set in the 1960s folk music scene of a “wintry, slushy grey, overcast Greenwich Village”, familiar from the cover of The Freewheelin’ Bob Dylan, with plot points knowingly shadowing fellow folk traveller Dave Van Ronk’s The Mayor of MacDougal Street: A Memoir, their new Inside Llewyn Davis is “a stringent voyage of overcast skies, melancholy folk, soured relationships and no direction home,” note our reviewers J.M. Tyree and Ben Walters.

Even more than their previous American roots odyssey O Brother, Where Art Thou?, it’s also teeming with self-aware yet richly resonant traditional music, expertly unearthed by the brothers’ ‘music archivist’ T Bone Burnett. He discusses the Coens’ archaeological musical interests with Frances Morgan – while the brothers open up to Nick James about the “hamster wheel” of success in which they sometimes feel caught, in strange reflection of their character’s circuitous dolours.

This is the season for the redoubtable American movies, lining up for their awards, so a year after the American-history triple whammy of Django Unchained, Lincoln and Zero Dark Thirty, it’s time again to visit the underbelly of the land of opportunity.

“Have you ever been to Louisiana?”, Steve McQueen asks Jonathan Romney. “It’s so beautiful – but the most horrible things happen in the most beautiful places.” The heat of the South is palpable on the skin and in the behaviour of the characters in McQueen’s typically physical 12 Years a Slave, though it’s what Romney calls the “horrific networks of fresh welts, bodies cut open like so much meat” that’s the first thing you’ll recall of the film. McQueen explains why he needed us to see slavery’s horrors “visually, mentally, psychologically, physically.”

In his latest Bildungsroman The Wolf of Wall Street, based on former Wall Street snake-oil salesman Jordan Belfort’s memoirs of his outrageous rampage through the early 1990s, Martin Scorsese strikes a very different tone. The insider perspective may echo the director’s earlier “fast rides through descending spirals of guilt-free hedonism and depravity,” writes Ian Christie, but there are American traditions at play here beyond the racketeer: sundry WASP masters of the universe, salesmen-evangelists, even the conman-fantasist Frank Abagnale also played by Leonardo di Caprio in Catch Me If You Can. Indeed, while Christie is finally moved to place the film in the “raucous tradition” of Preston Sturges’ manic satires, Scorsese’s editor Thelma Schoonmaker talks us through how they achieved its tone of “ferocious and unexpected” black farce, thanks to “tons of improvisation pouring into my editing room.”

The folk-singing protagonist at the heart of the Greenwich Village scene in the early 1960s in Inside Llewyn Davis is trapped in a cycle of endless misfortune, trying to make a success of things against the odds. But then, as the Coen brothers suggest, isn’t that a bit like life? By Nick James.

A history of violence

Steve McQueen’s 12 Years a Slave observes with raw, unflinching brutality the true story of a free black man who is forced into slavery in America’s Deep South – a visceral and distressing portrait of racial abuse that underscores the director’s belief that “if you don’t see it visually, mentally, psychologically, physically, then there’s no picture”. By Jonathan Romney.

Robert Altman’s The Long Goodbye recasts Bogart’s wise-cracking, lip-curling hard-man Marlowe from The Big Sleep as a shabby, mumbling insomniac adrift on the mean streets of Los Angeles – one of the most memorable in a run of adaptations reconfiguring Chandler’s distinctive universe for the big screen. By Kim Newman.

For half a century Raymond Depardon has been filming and photographing France and the wider world. His latest documentary, Journal de France, juxtaposes his unique archives with the travelogue of a contemporary camper van tour of his native land. By Kieron Corless.

Birth of a salesman

For all its apparent echoes of his previous work, Scorsese’s The Wolf of Wall Street sees the director expand his range, experimenting with a new vein of social comedy that helps capture the American zeitgeist as strongly as ‘Goodfellas’ and ‘Casino’ – this time not as gangster noir but as black farce. By Ian Christie.

Though Soviet art is often dismissed as dreary propagandist kitsch, in the 1920s Russian designers revolutionised the art of​ the film poster, embracing abstraction and surrealism, bringing new techniques and a dizzying dynamism to the form. By Isabel Stevens.

The director’s 1968 low-budget indie classic Night of the Living Dead helped reinvent horror cinema for the modern era, setting the tone for the subversive apocalyptic visions that would define his work over the next 45 years. Here, the original king of the zombies recalls what got him started, how his style evolved, why he remains defiant and what he thinks of the new breed of pale-faced imitators. Interview by James Blackford.

On the aftermath of polls

In the frame: All that jazz

Miles Davis’s moody soundtrack for Lift to the Scaffold proved a turning point, freeing him from the conventions of modern jazz. By Richard Williams.

Just when Pacino thought he was out, a BFI retrospective has pulled him back in. Here we select his very best work. By Nick James.

Kiss the Water director Eric Steel explains how he got hooked by the tale of an artisan artist who spent her life making anglers’ flies. By Trevor Johnston.

The pessimists are convinced the end is nigh for film criticism in the digital age – but perhaps criticism isn’t what they think it is, says Mark Cousins.

Concerns over the commercial viability of a tale about an unlikely Texan Aids activist kept the project on ice for more than 20 years. By Charles Gant.

How it works: Beefing up BIFA

Does Harvey Weinstein have something to teach the British Independent Film Awards about delivering audiences? By Ben Roberts.

The head of Mexico’s global cinema chain Cinépolis talks arthouse film, tapping the Indian market and the pleasures of salsa on popcorn. By Nick Roddick.

After a remarkable year for documentaries, the world’s biggest documentary film festival seemed a little on the quiet side, but there were still a few gems to be found. By Nick Bradshaw.

CPH:DOX: Staying true to its roots

Despite an expanded focus on activism, Denmark’s rising documentary festival still found space for the kind of esoteric work with which it made its name. By Isabel Stevens.

Profile: The music of light

For more than 40 years, Brazil’s Júlio Bressane has been harmonising a huge range of sources into a unique cinema of the subconscious. By Aaron Cutler.

Chaplin’s Tramp remains film’s most universal icon a century after his not entirely auspicious screen debut. By David Robinson.

Festival: The view from the bottom rung

Political agitation and impressively understated performances were to the fore at this year’s Seville European Film Festival, reports Michael Pattison.

Lizzie Borden’s Born in Flames is noted for its post-punk music but its soundtrack’s array of female voices is just as fascinating, says Frances Morgan.

Eric Rohmer is known as a director of exquisitely subtle conversation pieces. But as a major new release reminds us, he was so much more. By Geoff Andrew.

One of cinema’s first blockbusters, Wings depicted blood and guts on the ground and spectacular battle scenes in the skies. By Pamela Hutchinson.

Baby Peggy: The Elephant in the Room
Bus Stop
Creepshow
Dark Days
Far From Vietnam
Fireworks Wednesday
Guest Wife
Intolerance
Invasion of the Body Snatchers
The Land of Hope
The Phantom of the Opera
Weekend of a Champion

An Age of Kings
The Following – Season 1
Spyship

Filmed among Seattle’s teenage drifters and castaways in 1984, Streetwise is a bleakly bewitching portrait of life on the fringes. By Charlie Fox.

Jonathan Romney gets  lost in a study of Kubrick’s The Shining.

The final scenes of the noir classic are a rare example of a studio imposing an even bleaker ending than its filmmaker had intended. By Kim Newman.