We’ve bulked up for the holidays with our biggest issue ever – showcasing our best of 2018 poll, 32 pages of critics’ takes on the year in cinema, interviews with Alfonso Cuarón and Yorgos Lanthimos, appreciations of the films of Robert Redford, Alexander Korda and Laurel & Hardy, and a whole hog more.

In print and digital from 11 December 2018. Get the digital edition, buy a print edition or . 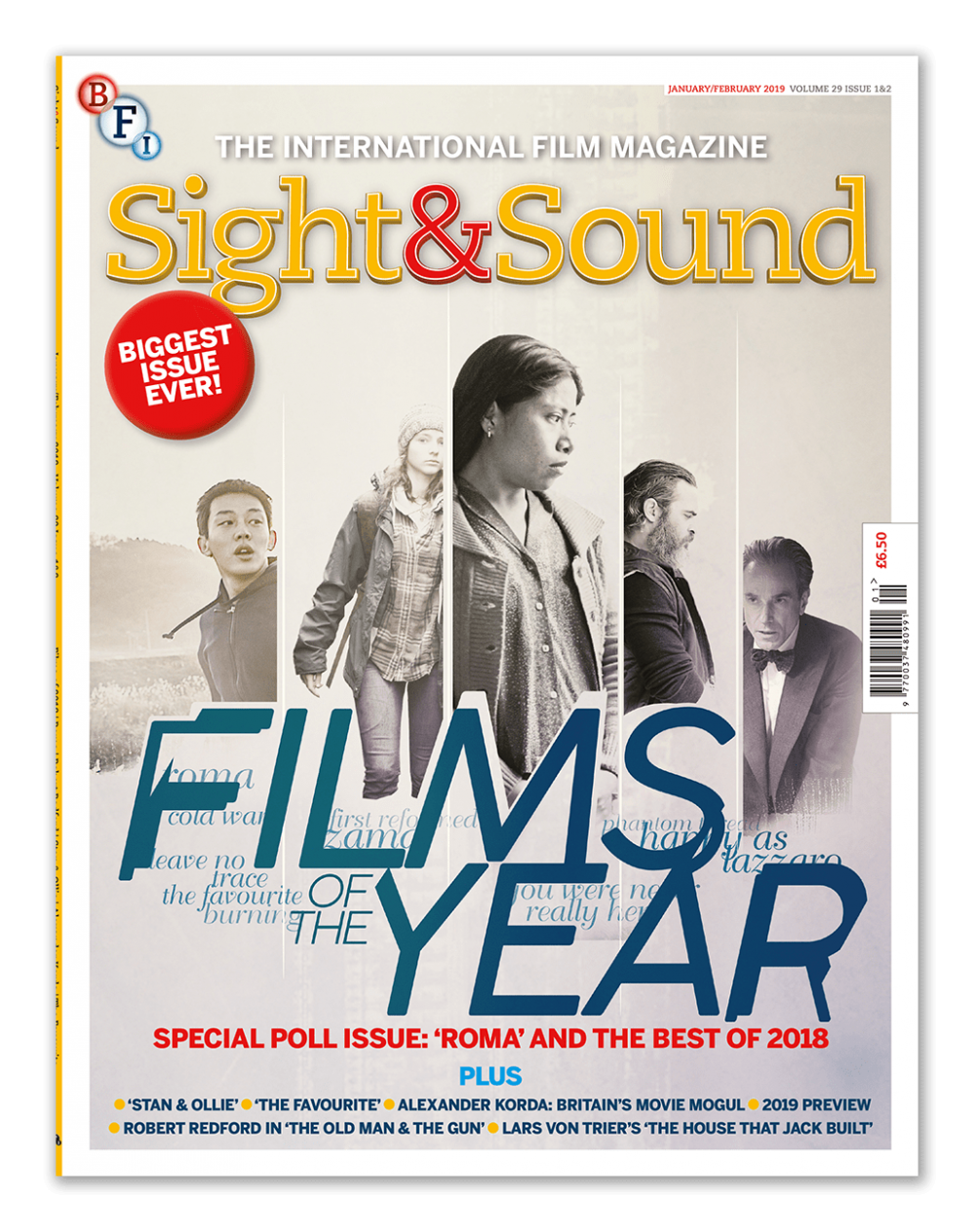 Welcome to a packed double issue of Sight & Sound, designed for the holiday period, and built around our Films of the Year Poll. At 144 pages (with 45 reviews), it’s the largest issue ever and we’ve produced it in response to a complex year that’s ending on a high note for films.

Film industry politics, set against a turbulent year in general, saw disputes about identity representation running in parallel with disputes about major auteurs’ presence on the big screen when their films are increasingly bought by streaming platforms. The upside is that, in reaction to the convergence of films and television series – and the creative freedom said to be encouraged by the latter – the feature film has raised its bar. To tease you about the poll (on the small chance you haven’t already looked), 2018’s best films turn out to be really outstanding.

In times of political turmoil and financial strife, audiences turn to lighter, more fantastic forms of entertainment, such as musicals or, right now, superhero movies. Six of the top ten worldwide box-office hits of 2018, at press-time, are superhero titles (Avengers: Infinity War; Black Panther; Incredibles 2; Venom; Deadpool 2; Ant-Man and the Wasp). Of the other four, two are old-style blockbusters (Jurassic World: Fallen Kingdom and Mission: Impossible – Fallout), one is a Chinese action movie (Operation Red Sea) and the last simply the latest Steven Spielberg film (Ready Player One).

None of these hits feature in our top 40. Instead, in our top ten alone, we have wonderful auteur films from Argentina, Italy, Korea, Mexico and Poland, as well as from the UK and US. This choice reflects, of course, the preferences of those who watch films for a living.

Big-screen theatrical cinema continues to be aimed at the put-upon young demographic that seeks relief from daily economic stress in fantasy entertainment and looks to have a value-for-money, hi-thrills, hi-tech experience on a Friday night – and who can blame them? The success of superhero blockbusters is also partly down to the financial clout of marketing strategies that produce a tremendous noise and often make critics seem redundant. Alongside that, there are legions of writers willing to boost for the sake of boosting, whom publicists call upon for poster quotes.

What the stark contrast of the box-office hits and our poll also points to is that we’re going to have to fight to keep the best cinema on the big screen. I say that not as an attack on streaming platforms, some of which offer a brilliant service; but they are a partial, if powerful, influence on a problematic theatrical exhibition scene which has to handle as many as 16 new releases per week, many of them second-rate. Platforms such as Netflix will continue to snap up distribution rights for the best films, so it is crucial the company be persuaded to allow theatrical runs to be as wide as possible.

Our poll is drawn from 164 contributors from around the world. We asked an equal number of men and women, but the responders are 100/64 in favour of men. People of colour make up about ten per cent of the total. The selections of 40 of those surveyed are included here; the rest can be found online. Intermingled with these is the most comprehensive review of a film year we’ve ever assembled, with round-ups covering animation, documentary, horror, silent cinema and TV drama, as well as overviews of African, American, British, East Asian, French, Indian, Latin American, Russian, and Central and Eastern European cinema. Alongside the poll, of course, are our usual features on the finest films about to be released in the UK, including our poll winner. We think this issue shows us at our best.

But the chance to sum up a year comprehensively is not the only reason for this double issue. Sight & Sound, like all publications, is trading in what the Guardian has called “an incredibly challenging commercial environment”. Having a great double issue like this delivers a better, more comprehensive magazine while saving costs.

Of course, the best help we can have is more readers. Better yet, more subscribers. We’ve always maintained a relationship of mutual respect with you all, which we think you appreciate. But this being the holiday season, we’d like to take this opportunity to engage you more in our future. We’ve done regular surveys of what readers want, and you tend to say you want more of the same. Surveys, though, are self-selecting, so I’d like to ask any reader who has strong ideas about what we’re doing, right or wrong, to email suggestions to S&S[at]bfi.org.uk. Obviously we’d also like you to urge anyone you think will enjoy the magazine to subscribe to S&S. It’s . Happy holidays. 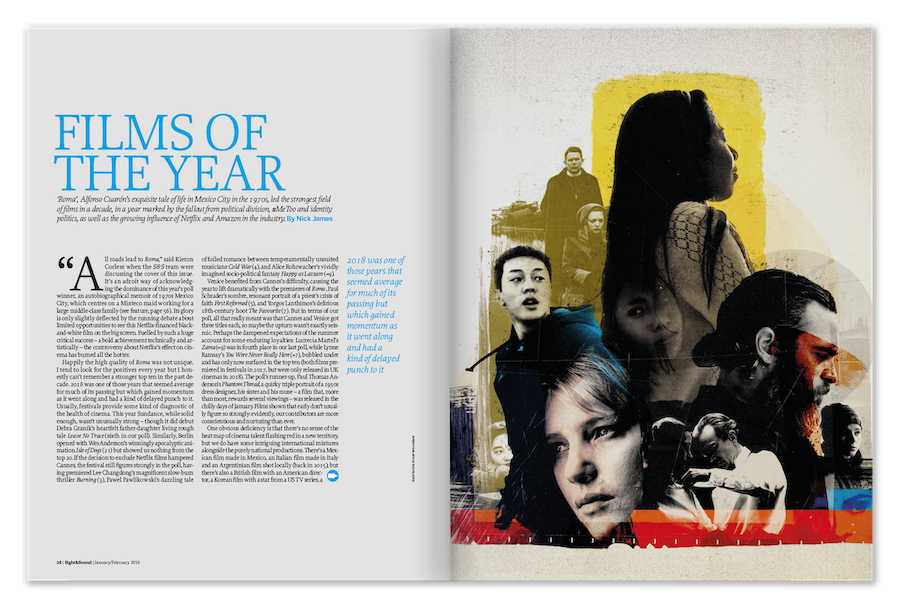 The annual S&S critics’ poll uncovers the strongest field of films in a decade, in a year marked by the fallout from political division, #MeToo and identity politics, as well as the growing influence of Netflix and Amazon in the industry. By Nick James.

+ The year in review 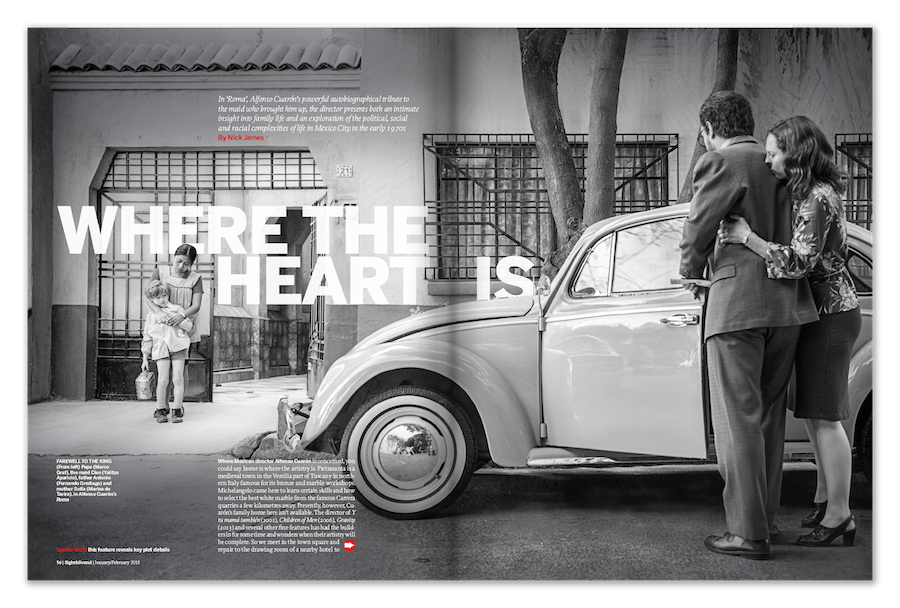 Where the Heart Is

In Roma, a powerful autobiographical tribute to the maid who brought him up, Alfonso Cuarón presents both an intimate insight into family life and an exploration of the political, social and racial complexities of life in Mexico City in the early 1970s. He talks to Nick James. 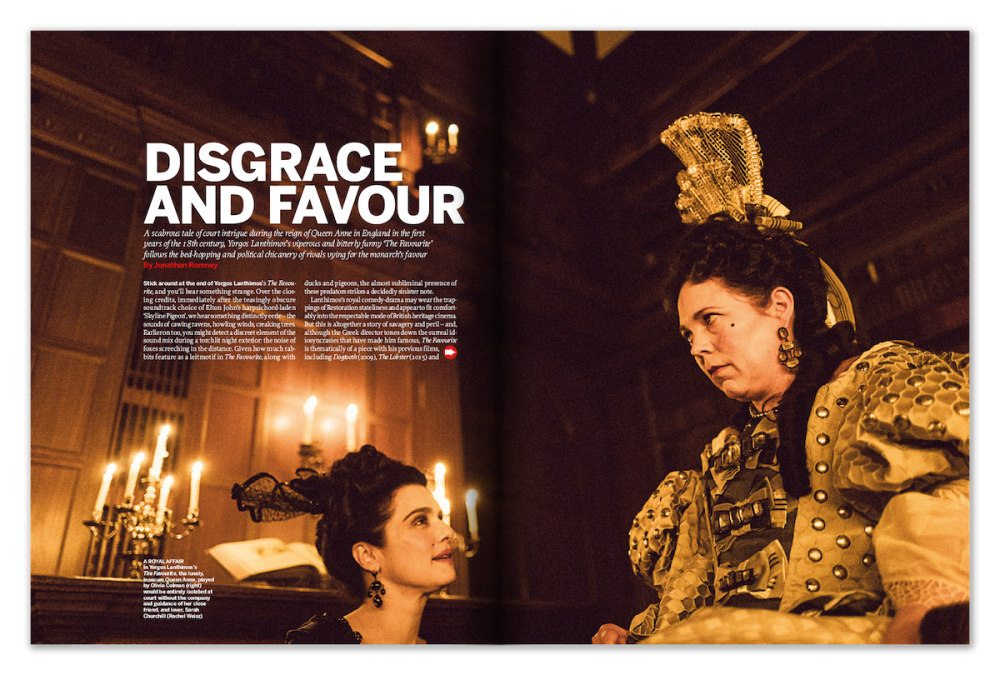 Yorgos Lanthimos’s viperously funny The Favourite is a scabrous tale of intrigue at the court of Queen Anne in the England of the early 18th century. By Jonathan Romney. 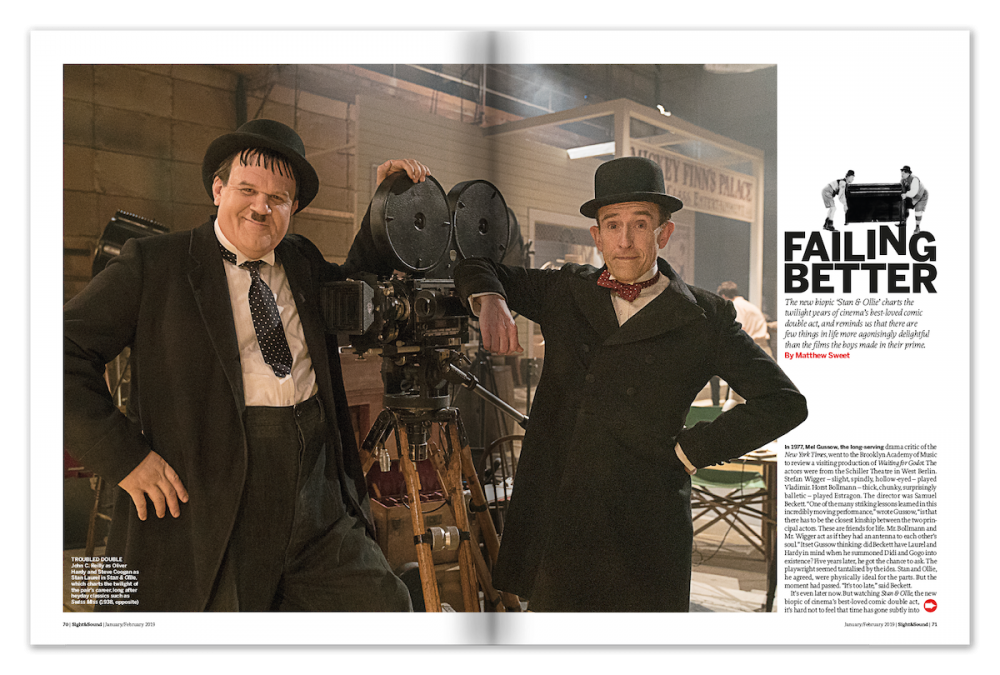 The new biopic Stan & Ollie reminds us that there are few things in life more agonisingly delightful than the films Laurel and Hardy made in their prime. By Matthew Sweet. 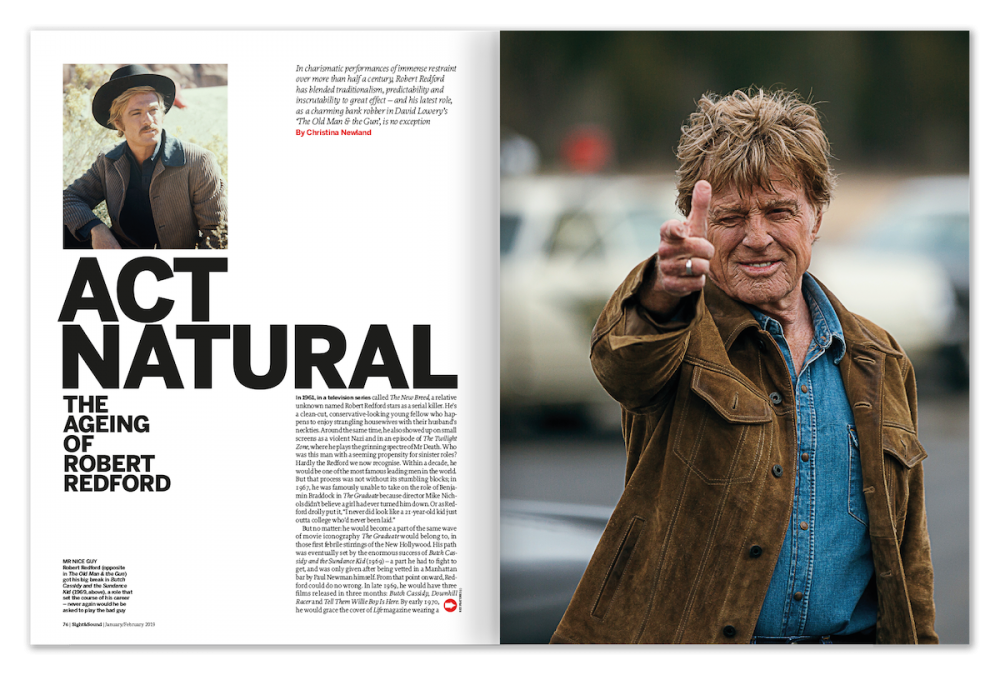 Over more than half a century, Robert Redford has effortlessly blended traditionalism, predictability and inscrutability in a host of charismatic performances. By Christina Newland. 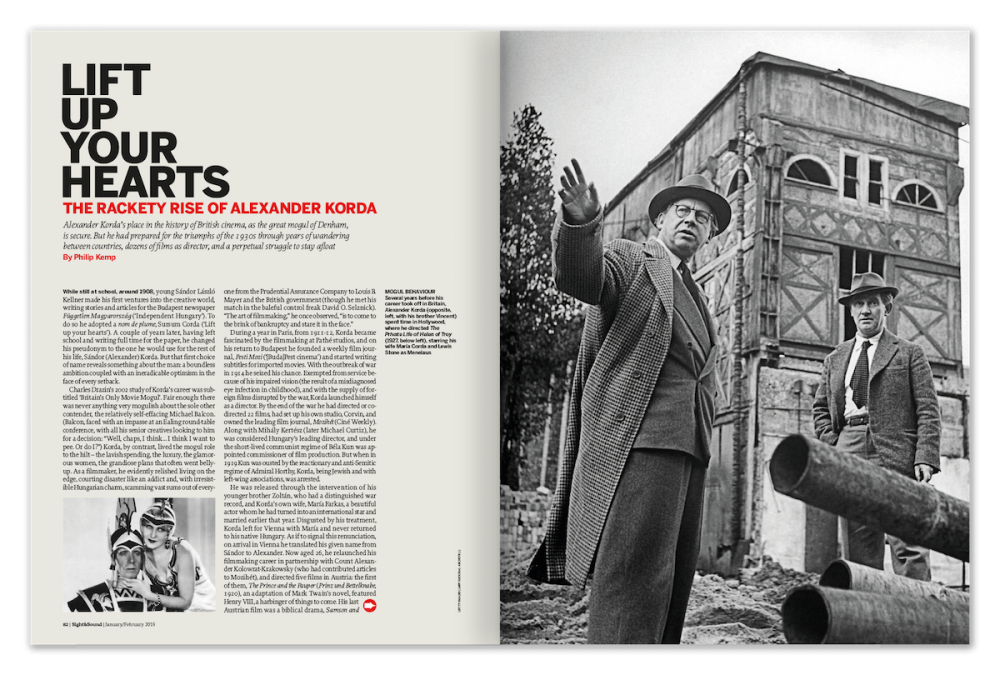 Lift Up Your Hearts

Before he became Britain’s only film mogul, Alexander Korda served a long apprenticeship in Europe and across the Atlantic. By Philip Kemp.

This month’s S&S: feel the girth 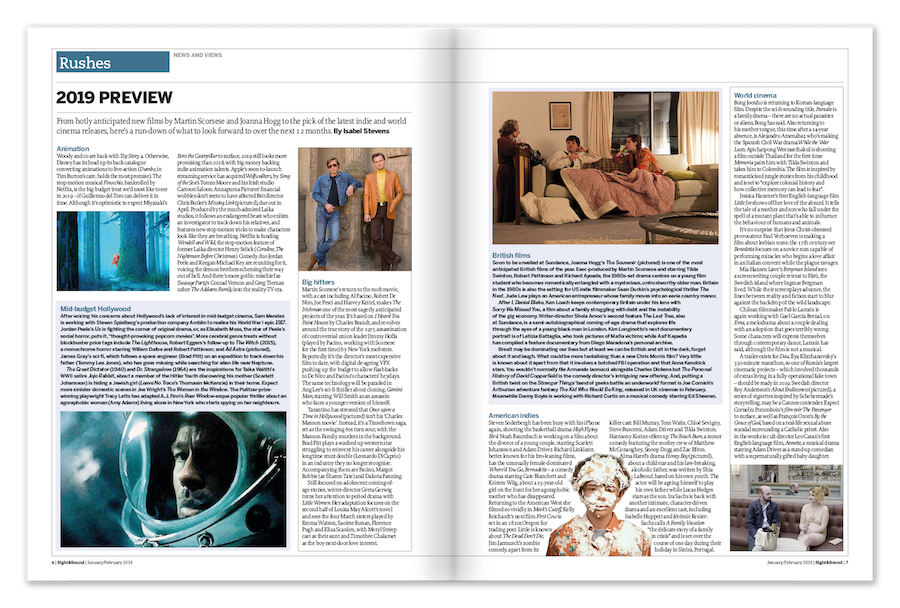 From hotly anticipated new films by Martin Scorsese and Joanna Hogg to the pick of the latest indie and world cinema releases, here’s a run-down of what to look forward to over the next 12 months. By Isabel Stevens.

Peter Strickland, the director of Berberian Sound Studio and In Fabric salutes a haven in Copenhagen for cinephiles with a predilection for the wayward.

Outgunned by the sun and Gareth Southgate, UK cinemas fought back – but foreign-language arthouse is seriously wounded. By Charles Gant.

Beginnings are always far more satisfying than endings – in films as much as in life – but sometimes the moment comes to say farewell. By Mark Cousins. 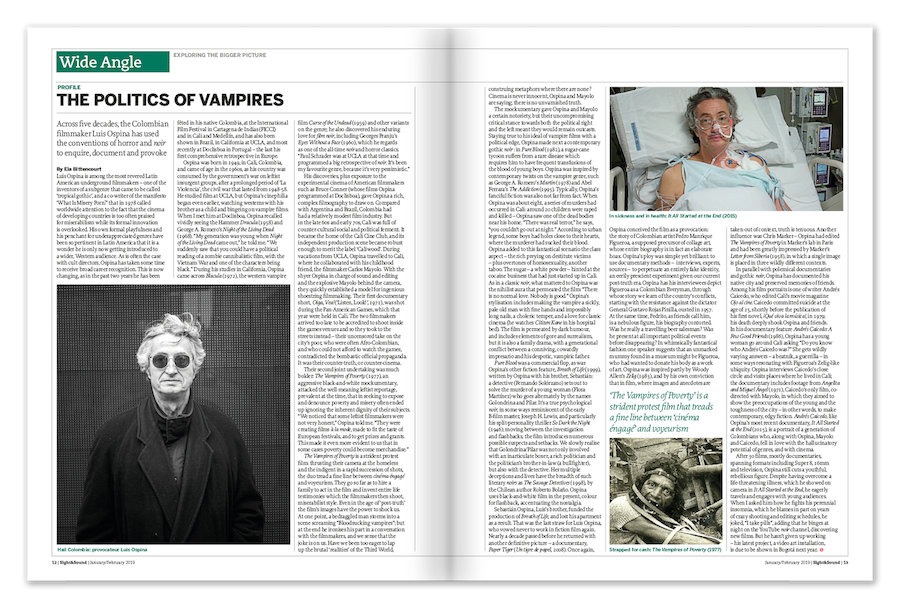 Profile: The politics of vampires

Across five decades, the Colombian filmmaker Luis Ospina has used the conventions of horror and noir to enquire, document and provoke. By Ela Bittencourt.

Primal screen: Echoes of the present

At this year’s Pordenone festival, the silence of the past was filled with rumblings of modern-day discontents. By Jay Weissberg.

Artists’ moving image: The end of the world as we know it

As society inches toward destruction – or maybe rebirth – we need all the guidance we can get: can Empty Metal help? By Sukhdev Sandhu. 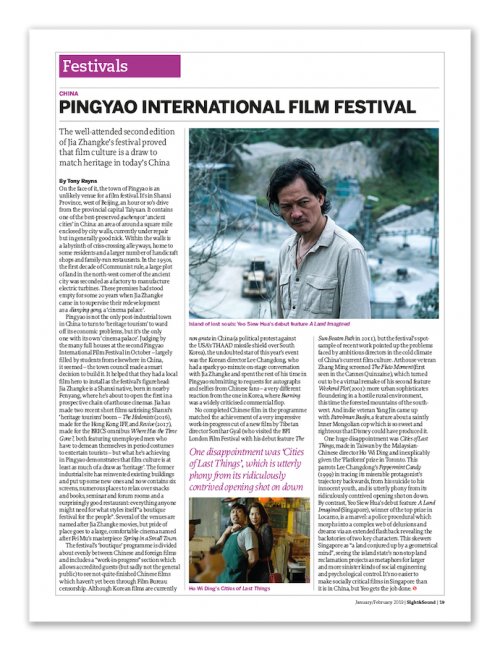 The well-attended second edition of Jia Zhangke’s festival proved that film culture is a draw to match heritage in today’s China. By Tony Rayns.

The Viennale saw just the right mix of continuity and change under its new head, who unveiled a host of thrilling B movies and essay films. By Kieron Corless. 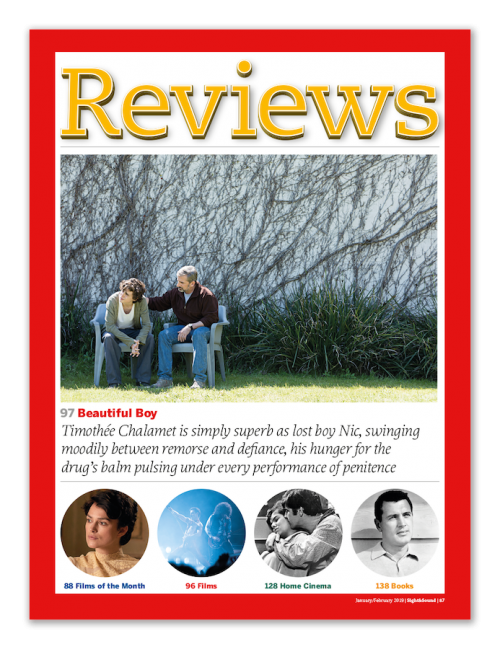 Adrift in Soho
The Ballad of Buster Scruggs
Beautiful Boy
Bergman: A Year in a Life
Bird Box
Bohemian Rhapsody
Destroyer
Fantastic Beasts: The Crimes of Grindelwald
The Favourite
Free Solo
The Front Runner
The Girl in the Spider’s Web
The Grinch
Hale County This Morning, This Evening
Hell Fest
An Impossible Love
Island of the Hungry Ghosts
Kin
Life Itself
Lizzie
Mary Queen of Scots
Meteors
Monsters and Men
Mug
1985
Nobody’s Fool
The Nutcracker and the Four Realms
The Old Man & the Gun
On Her Shoulders
Papillon
The Raft
Ralph Breaks the Internet
RGB
Return of the Hero
Robin Hood
Roma
Sorry to Bother You
Stan & Ollie
Theatre of War
The Upside
White Boy Rick 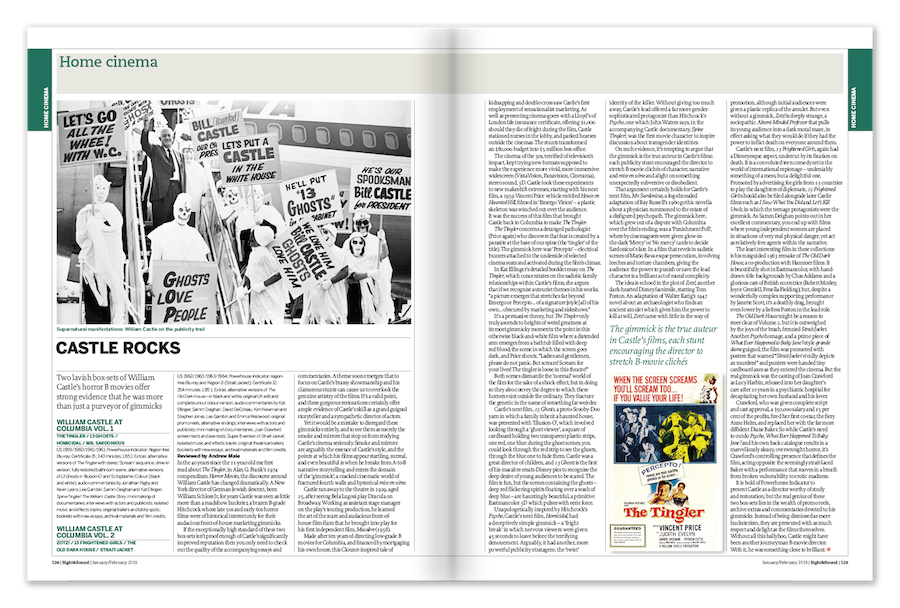 Two lavish box-sets of William Castle’s horror B movies offer strong evidence that he was more than just a purveyor of gimmicks. Reviewed by Andrew Male.

A new release of Orson Welles’s mutilated second film shows more clearly than ever the magnificence that might have been. By Graham Fuller. 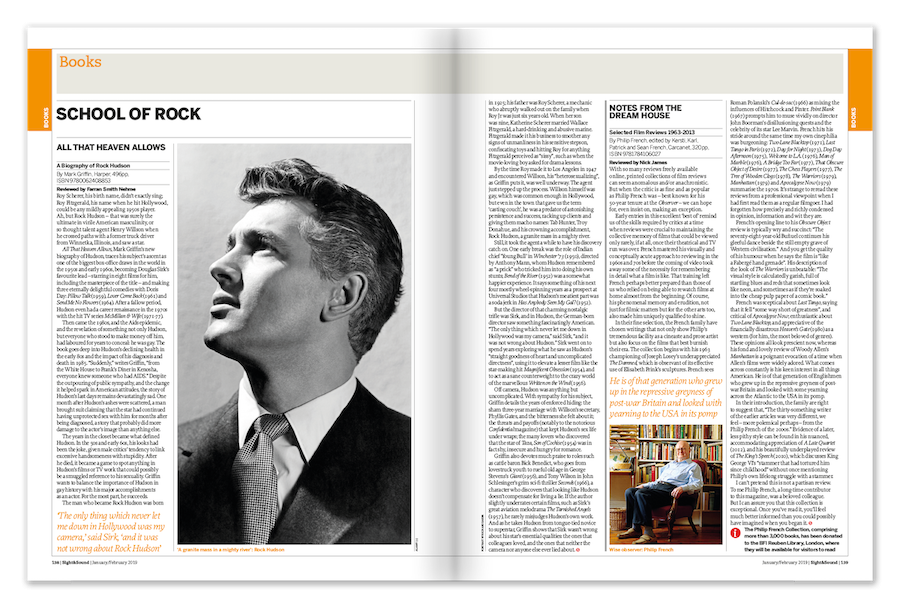 All That Heaven Allows: A Biography of Rock Hudson by Mark Griffin (Harper) reviewed by Farran Smith Nehme

The Call of the Heart by John M. Stahl and Hollywood Melodrama edited by Bruce Babington and Charles Barr (John Libbey Publishing) reviewed by David Cairns

Steven Spielberg found the close of Powell and Pressburger’s great film so affecting that he honoured it with a tribute in Saving Private Ryan. By John Wrathall.