Film of the week: Roma reframes Alfonso Cuáron’s boyhood through the eyes of his family’s maid

Cuáron’s magnificently crafted memoir casts us back to a 1970s childhood in the throes of family break-up, ruptures on the streets of Mexico City – and a Mixtec housekeeper, played by nonprofessional actor Yalitza Aparicio, given the weight of the drama.

Voted the best film of 2018 in our annual critics’ poll.

from our next issue 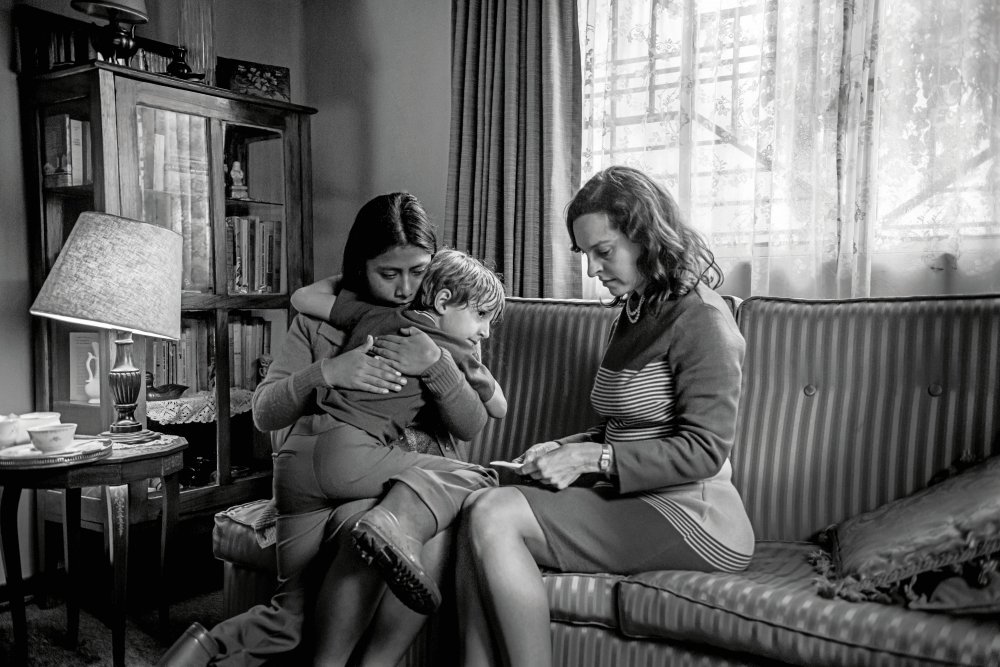 Yalitza Aparicio as Cleo, Marco Graf as Pepe and Marina de Tavira as Sofia in Roma

Roma is the sort of movie that successful pop filmmakers say they’d like to use their clout to make but almost never do – a small film against the blockbuster scale that writer-director Alfonso Cuarón has been working on since Harry Potter and the Prisoner of Azkaban (2004), though impressively mounted according to the contemporary standards of the international ‘art film’, seemingly aspiring to join these cloven poles of film culture, which have only grown further and further apart since Cuarón’s boyhood in the 60s and 70s.

The world of Cuarón’s youth is the world of Roma, which follows the travails of a live-in housekeeper, Cleo (Yalitza Aparicio), and the disintegrating upper-middle-class family that she keeps fed and coddled, a silent cushion to absorb occasional eruptions of abuse from the abandoned matriarch (Marina de Tavira). The film’s title refers to Colonia Roma, the Mexico City district where much of the movie takes place, though it also lends an Italianate air to the proceedings – appropriate, since Cuarón’s use of black-and-white widescreen and long, patiently unwinding sequence shots, often organised as a series of deliberate panning pivots from a planted point, suggests at times the Italian drama of the 50s and 60s. There is a bit of Federico Fellini in its bigger-than-life inflation of autobiographical memory, of the legacy of neorealism in its mixture of professional and nonprofessional performers, and also of the lesser-known Antonio Pietrangeli, whose filmography is filled with instances of quietly intricate blocking and camera-play. 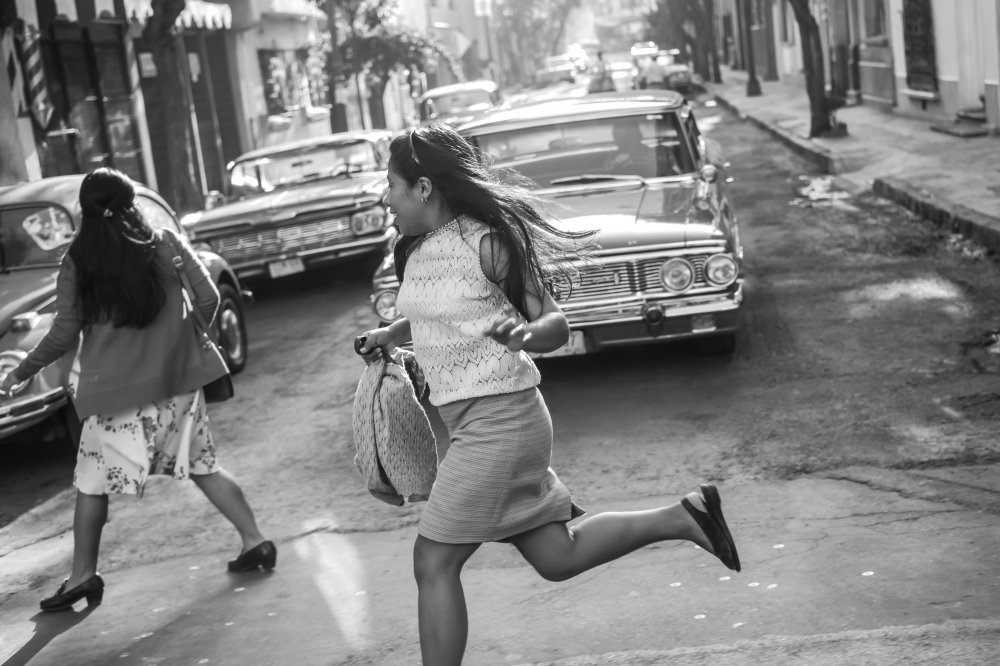 But while set in a Mexico City meticulously and extensively dressed to appear as it did at the beginning of the 1970s, courtesy of a budget that perhaps only the auteur of a massively successful science-fiction film like Gravity (2013) could command for a monochrome domestic drama, Roma is very much a film of 2018. The black-and-white photography is digital, shot on an Alexa 65, with the techie director doing double-duty as cinematographer, and the film’s immersive sound design is achieved via the omni-directional Dolby Atmos system, used most prominently in a scene where Cleo, who can’t swim, has to scramble into the rugged surf off the Veracruz coast after two of the children, the peril of her mission emphasised by the theatre-filling roar of the tide, really just a tad choppy, though in Cuarón’s rendering it seems impossibly savage.

To invest everyday incidents with an outsized presence is very much Cuarón’s tactic in Roma, in which an aloof father’s manoeuvring of a land cruiser Ford Galaxy into a cramped carport is shot with the reverence of a mothership landing. The film contains one storyline that might mark it a ‘historical epic’, bringing Cleo’s story brushing up against the Corpus Christi massacre of 10 June 1971, but the clashes between student demonstrators and government thugs are never shot for sweep and spectacle, and the focus remains on the by-then-very-pregnant Cleo and her immediate concerns, her waters breaking and a ‘reunion’ of sorts between her and the father of her unborn child, a coincidental meeting that might almost be called Dickensian – and recall that Cuarón directed a deeply-felt modern-day version of Great Expectations some 20 years ago.

More explicit callbacks to Cuarón’s filmography surface as well. The Veracruz beach that features in Roma was also the setting for the climax of Cuarón’s last Spanish-language film, 2001’s Y Tu Mamá También, and the director has spoken at length about the semi-autobiographical qualities of his latest, which depicts the milieu of his youth, draws heavily from the story of his own childhood nanny, Liboria ‘Libo’ Rodríguez, and contains formative images which, seen by the boy, would reappear in the films made by the man. This includes a nod to Gravity in a scene where the family, including a stand-in for the young director-to-be, sit and watch the 1969 lost-in-space picture Marooned. 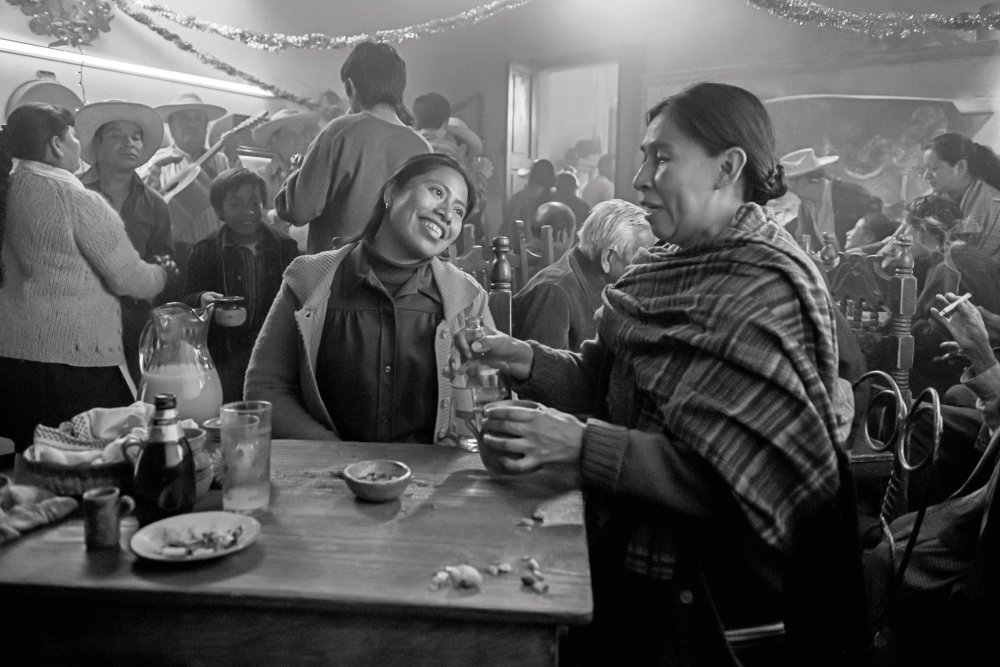 Cuarón has seeded pieces of his personal history throughout Roma, but they come to us through the character of Cleo. Aparicio – a Mixtec woman from Oaxaca like Libo, and a vocational schoolteacher here appearing in her first film – shows up at least fleetingly in nearly every scene, and anchors it with the unmistakable verity of her warm-yet-reticent presence. Showing us the dissolution of a family through the eyes of a domestic rather than a child, Cuarón has given us an original gloss on the formula of What Maisie Knew, as well as a reworking of the Felliniesque memory film, one that decentralises the Artist as a Young Man.

Endeavouring to use the clout of adult accomplishment to recreate the atmosphere of one’s childhood in minute detail is, intrinsically, an egotistical undertaking, but while resurrecting his youth, Cuarón has also given it away, ceding centre-stage to a character who waited in the wings of his privileged existence. These counterbalanced, even counterintuitive impulses of self-importance and selflessness are the poles that define Roma, a contradictory tension which brings the movie close at times to collapsing upon itself – and, paradoxically, acts as a guarantor of its endurance.

Related to Film of the week: Roma reframes Alfonso Cuáron’s boyhood through the eyes of his family’s maid