A cinema-in-the-moment: Sam Green on A Thousand Thoughts and the ‘live documentary’

Sam Green grew tired of making “fixed and permanent” documentaries, so now he performs them – his latest, A Thousand Thoughts, alongside its subjects the legendary Kronos Quartet. He talks to Robert Greene about the history, economics and politics of standup cinema. 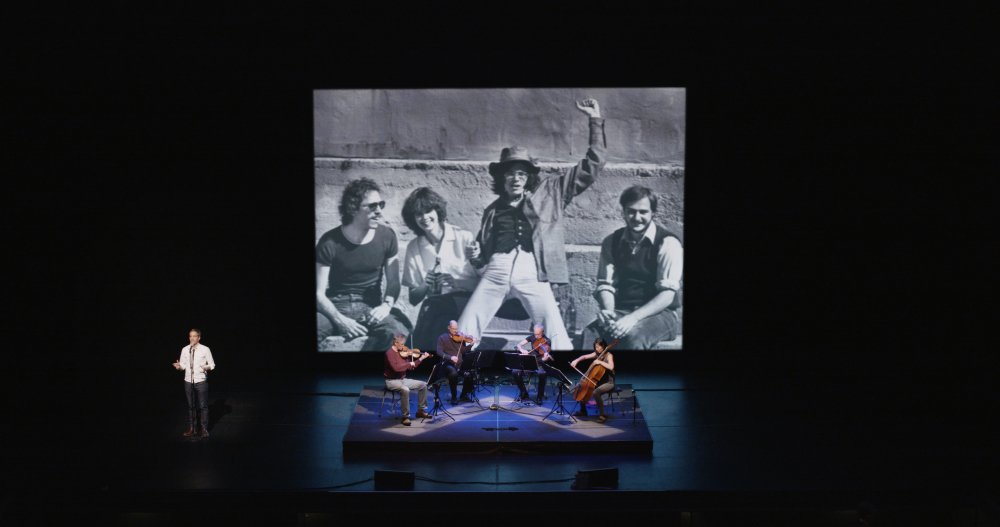 Sam Green’s 2003 documentary The Weather Underground was nominated for an Academy Award, but he responded to this breakout success by essentially leaving the dance without the one who brought him – namely the traditional documentary form, with its stubborn reliance on linear time. Since his much-lauded Utopia in Four Movements premiered in 2010, Green has been exploring a new hybrid style, mixing a traditional nonfiction approach with live performances in what he calls ‘live documentary’. Green has employed this method in several pieces since, earning a sterling reputation as a tinkerer/performer poet, pushing documentary into new areas.

A Thousand Thoughts is screened and performed at the Barbican Hall, London on Friday 18 May 2018.

His latest work, made in collaboration with editor extraordinaire Joe Bini, is a multifaceted portrait of the legendary Kronos Quartet that premiered earlier this year at Sundance Film Festival. A Thousand Thoughts is a major work, stimulating and haunting; Green and Bini have found a form that explains and expands on the Kronos Quartet’s capacious and eclectic musical style.

I talked with Green over email about A Thousand Thoughts and the origins of his ‘live documentary’ style.

Why did you abandon ‘normal’ documentary – an approach that you called “a fixed and permanent thing” in A Thousand Thoughts – in favour of this new method?

I was putting together Utopia in Four Movements and got very stuck with the project. I was weaving together four different stories about the 20th century and in my mind they created this larger poem about the waxing and waning of utopia and why we no longer had the ability to imagine a radically better world. I showed a rough-cut of the film to friends and no one got it. So I was crushed. And also stuck. I knew the film needed some kind of explanatory thread, but I came up in the era of documentary when people tried as hard as humanly possible to avoid voiceover in their films.

So at some point someone asked me to do a presentation about the project and I said, “Okay, I can talk and show clips from the film. That sounds boring, so why don’t I get my friend Dave Cerf to make some live music as well. It’ll be a super fancy PowerPoint presentation.”

And so we did that, and the funny thing was it totally worked! People got the film, and they stuck around afterwards and talked – something that was really important to me. Another person asked us to do the same presentation at a film festival, and we made it even fancier. So we premiered Utopia in Four Movements at the Sundance in 2010 and ended up touring all over the world for several years screening it. I was completely smitten by the form.

What are the predecessors of this style?

People sometimes say to me, “You’ve made up this entirely new thing!” and I’m always quick to dispute that. Obviously, there were silent films and live music. But in the early days of cinema there was also a separate tradition and culture of lectures, and some of these early lecturers worked cinema into their talks. There was a guy named Lowell Thomas who traveled around the world doing talks and would sell out huge venues. He created a lecture/film about Lawrence of Arabia (1962) that had a six-month run in London, and he was basically doing the same thing I’m doing: talking, showing clips, live music. In Japan, there was an early cinema tradition called the benshi – these were live narrators of films that were super popular.

Then in the 20th century, there was a form within cinema called the travelogue – people would go to obscure locations and put together talks about the journey with film or slides. I remember going to travelogues as a small kid with my grandmother, and they were fantastic. Some of the early surfing and ski filmmakers would tour around present their work live – film and live narration. Warren Miller, the godfather of ski films, did this for many years. There’s also the Expanded Cinema movement from the 60s and 70s. And closer to our time, the great Canadian filmmaker Guy Maddin has done some fantastic live cinema pieces and I was greatly inspired by him.

How does this live documentary form allow for a different meditation on time passing, a different type of ‘cinematic time and space’ that helps you get at the heart of what the Kronos Quartet is all about?

From the beginning, I felt like this form was perfect for a portrait of Kronos. They’ve been around for 40-plus years, have put out dozens of albums, collaborated with everyone from Astor Piazzolla to Laurie Anderson – the scale and scope of their oeuvre is incredible. But the most powerful thing about them really is hearing them play live. 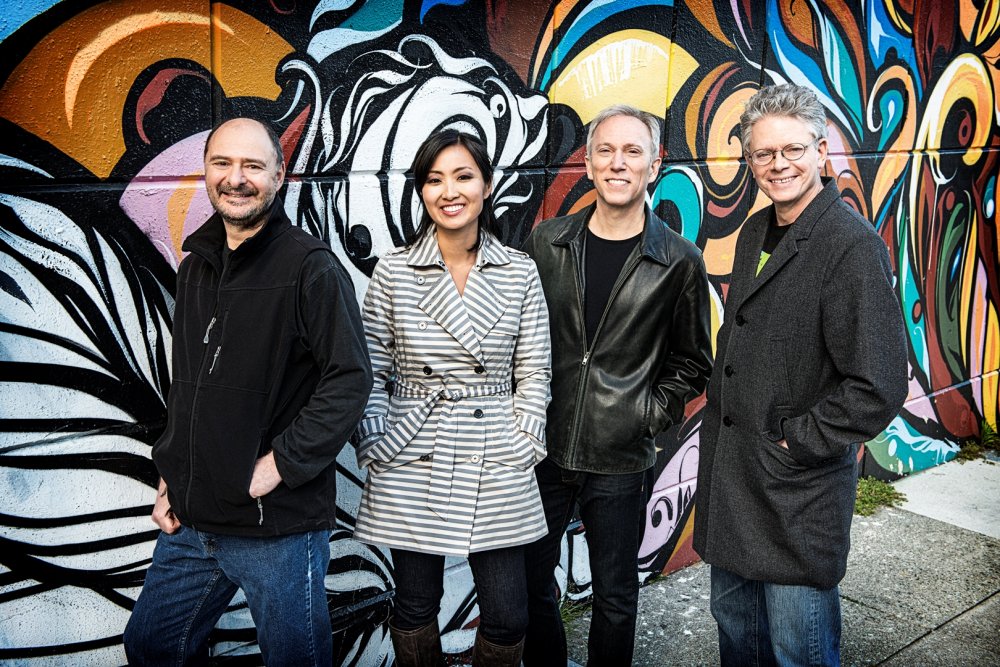 Live documentary combines radically different ways of thinking about and experiencing time and space. The basic mechanism of film is a kind of transporting of the audience to other times and places and if people start to look around the cinema and think to themselves, “Wow, this is an odd sized movie theatre,” or “I really love the old Egyptian murals on the wall here” – you’ve lost ’em! One of the hallmarks of performance, though, is a radical being-in-the-moment. Performers and the audience share a time and space – everyone is in the room and experiencing something together that will never happen the same way again, and we are all aware of that on some level.

So with these live documentary pieces, it’s super fun and challenging to toggle back and forth between these two modes of experience. At certain points in A Thousand Thoughts the viewer should be completely glued to the screen, but at other points we make you radically aware of being in the room and sharing this moment.

There’s an amazing scene where you stop the interview and have a member of the quartet explain two types of playing that he’s just mentioned onscreen. Does an idea like that come first or does it arise over the course of making the film?

That scene came about because Hank (the violist of Kronos) talked in his interview about how Terry Riley profoundly changed their sound – he encouraged them to avoid vibrato and to use something called ‘bow expression’ instead. I knew that most of the audience would not understand this, so I scratched my head and wondered how I could explain. Then it hit me – I could just freeze the interview up on the screen and have Hank demonstrate the difference in person. It’s a simple intervention, but I think it does evoke a lot of the richness and complexities of the form.

My hope was that after that scene, when Kronos plays the great Terry Riley piece The Wheel (1983), you would know what to listen for in the music – this distinction between vibrato and bow expression. It would be a much richer experience.

There are many elements at play but silence is a big part of the experience. How does this type of performance filmmaking allow you to use silence in new ways?

From the beginning, one of the things that really appealed to me about this form is that because it’s weird and novel to most people, they don’t bring any real expectations. So with a traditional music documentary for example, if you let a song go for too long, it gets ‘slow’ and ‘boring’.

With the live documentary – and especially this one about Kronos – it’s a great luxury to be able to let them play a piece of music uninterrupted for three minutes. Nobody squirms or gets bored – or at least I hope they don’t – because they don’t really have any expectations.

And with this piece in particular I knew that using some silence could be a powerful thing – to get the audience to really engage with their ears. With A Thousand Thoughts I knew I wanted people to listen in a different and much more engaged manner – that that would make the Quartet’s music much more of a profound experience.

How was it to work with master editor Joe Bini? How is editing a live documentary different?

Oh man – Joe Bini is a god! I’ve always really liked collaborating with people, and working with Joe was one of the highlights of my career. I knew that Joe was sick of editing, and I’ve always edited my own films so I didn’t need a traditional editor. I was more interested in working with Joe as a collaborator (and in the end we are both credited with directing, writing and editing the piece).

I think that Joe was intrigued by the idea of writing/editing this kind of piece. It’s a really complicated process. In a nutshell, you edit the piece more or less like a traditional film, but you have to imagine how things will happen live. Joe and I put the whole thing together and then worked with Kronos for two separate stints to turn it into an actual live experience.

The trailer for A Thousand Thoughts

How does this work economically? Isn’t it harder to exploit the project for economic gain if you can’t just send a Digital Cinema Package (DCP) to screen it?

This was a big surprise to me, but the performing arts world is a way better place financially than the film world. In the film world, the bottom dropped out some time ago because the basic commodity of that world has been reduced to a digital file.

The performing arts world is still based on someone showing up and doing a dance or singing a song live. So the economy that was built around that is still more or less intact. This is why musicians now – unless you are Drake – are no longer making most of their money off recordings; they make money touring. So yes, who would have thought you’d have a filmmaker singing the praises of the money in the performance world?

Is doing a live documentary political?

These days all of the technology around culture is pushing us increasingly to watch things and listen to things alone. You can binge watch Wild Wild Country on Netflix at your apartment, or you can ride the subway listening to your own curated soundscape courtesy of Spotify, but these new forms of consuming culture are replacing older models that often were more collectively-oriented and less corporate.

So in the context of this new world, I feel strongly that there is a politics around the form of live cinema that’s important. The idea of us traveling all the way to London, you buying a ticket and all of us turning off our phones, being 100 percent present, and together creating something that will never happen the same way twice – there’s something not only magical about that, but there’s also something politically valuable too. Sitting in a dark room with strangers is a radical act!

Related to A cinema-in-the-moment: Sam Green on A Thousand Thoughts and the ‘live documentary’