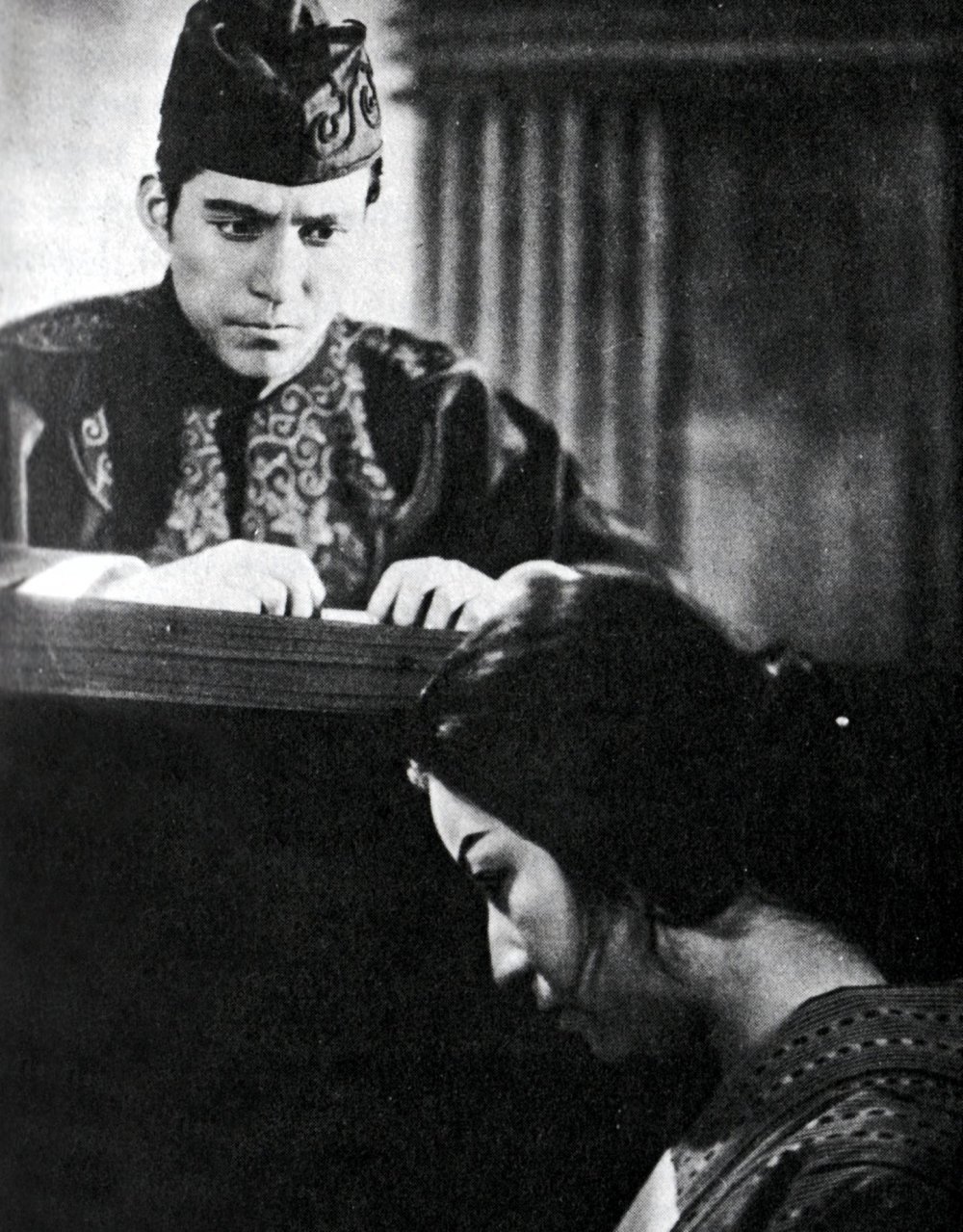 For many cinephiles in the West, Mizoguchi Kenji remains best known for his bleak yet serene late period films, Ugetsu Monogatari (1953) and Sansho Dayu (1954). Yet these masterpieces were the conclusion to a rich and varied career that stretched back to the silent era. Indeed, one of Mizoguchi’s silent films, Passion of a Woman Teacher (1926), was actually screened in Europe shortly after its original release – a rare example of a Japanese film that reached the West before the postwar breakthrough of Rashomon (1950).

The Water Magician screened at the Barbican on Sunday 24 October 2010.

Sadly, like almost of its director’s output before sound, that film is now lost. But one Mizoguchi silent that has thankfully survived is the extraordinary The Water Magician (1933), showing this weekend in a remarkable event at the Barbican, where it will be accompanied by the music of the koto and live benshi commentary.

The Water Magician is the fourth of Mizoguchi’s films to survive, but it is the first that really feels like his own: the first, in Mark LeFanu’s words, “in which one can properly see the Mizoguchian world-view in all its unpolished purity and bleakness.” The story of a female artiste’s struggle to ensure that the man she loves can become a lawyer was derived from a late nineteenth-century novel by Izumi Kyoka, which had itself been adapted for the stage as a shinpa (‘new school’) play – a melodramatic form of theatre distinguished from the traditional kabuki by its use of contemporary settings and colloquial language.

By 1933, this ‘new school’ was itself passé, but Mizoguchi revitalised it brilliantly through the realism of his settings and the inventiveness of his direction. At the same time he brought a new intensity to shinpa themes, imbuing the story of a strong woman’s sacrifice for a weak man with an extraordinary emotional power and sharp feminist undertones. The premise was to recur in Mizoguchi’s later work in The Downfall of Osen (1935) and The Story of the Late Chrysanthemums (1939).

Mizoguchi sets his tragic story against the atmospheric backdrop of provincial Japan, precisely recording the details of life and work among a troupe of travelling artists. Although his mature visual style was not yet fully developed in 1933, the film already reveals the director’s skill with the camera, including the first signs of the fluent use of the long take which earned him the admiration of Western critics such as André Bazin.

Irie Takako’s magnetic performance as the “water magician” Taki no Shiraito is one of her finest, showing the power and allure she possessed as a leading actress of the 1930s. (Western audiences may be most familiar with her as a middle-aged woman, playing the chamberlain’s wife in Kurosawa Akira’s Sanjuro (1962)). Her lover, Kinya, is touchingly played by Okada Tokihiko, a distinguished actor whose career was cut short by his premature death from tuberculosis a year after Mizoguchi’s film was made.

The opportunity to see this early Mizoguchi in London is rare enough. But this weekend’s screening [24 October 2010] offers an even rarer chance to see a Japanese silent film with live spoken narration, as was customary in the 1920s and 1930s.

Japanese silent cinema was noted for the presence of a unique institution, that of the benshi or narrator, who would stand beside the screen providing a running commentary on the action. The benshi would supply the voices of the characters, describe the events and settings, and underline the moral and emotional content of the film. The popularity of the institution was such that Japanese audiences often went to the cinema to see a favourite benshi rather than a favourite film star, and the coming of sound in Japan was retarded by the benshi’s fame and power within the industry – a fact that helps to explain why a film like The Water Magician was still silent as late as 1933.

Today a few benshi still ply their trade in Japan, most notably Sawato Midori, herself trained by Matsuda Shunsui, the devotee of silent film who preserved the surviving copy of The Water Magician. But to our knowledge this Sunday’s screening is the first time that a British audience has had the opportunity to view a Japanese silent with benshi narration. Viewers who do not understand Japanese will be pleased to learn that Komura Tomoko will perform her commentary in English.

The film will also benefit from Melissa Holding’s musical accompaniment on the koto, the Japanese zither whose plaintive melodies will complement the delicacy of Mizoguchi’s direction. All in all, this chance to see the early work of a cinematic master with these traditional – and rare – accompaniments is not to be missed.