Sense8 and The OA: making the vital connection in alternative science fiction

The divisive, dystopian politics of our age are countered in two new thriller series that proclaim a dream of unity and shared identities brought about by technology and modern mysticism. 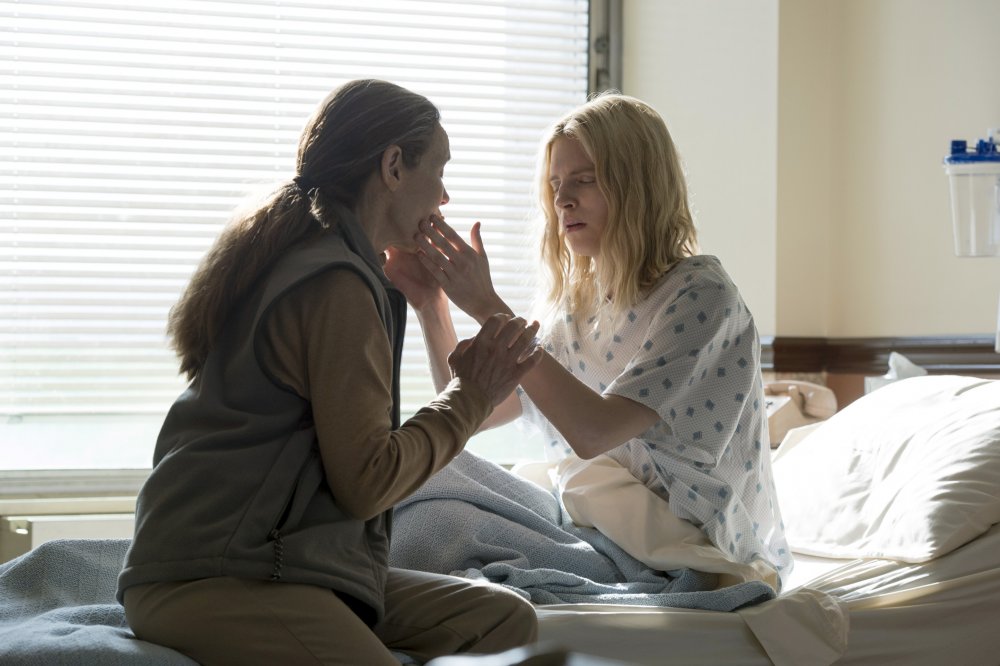 We are living in science-fictional times. George Orwell’s Nineteen Eighty-Four, one of four books (with Hannah Arendt’s The Origins of Totalitarianism, Sinclair Lewis’s It Can’t Happen Here and Frederick Douglass’s autobiography) selling out due to ‘promotion’ by the Trump administration, is not currently being adapted for television, but the stage adaptation by the Almeida / Headlong / Nottingham Playhouse is heading for Broadway. And a greatly anticipated adaptation of Margaret Atwood’s The Handmaid’s Tale, directed by Reed Morano, will air on streaming service Hulu this April.

Sense8 is available to stream on Netflix with more episodes of Season 2 due on 5 May 2017.

The OA is also available to stream on Netflix.

Both dystopian novels have been frequently cited, along with Octavia Butler’s Parable of the Talents, to describe contemporary American politics – and a wide range of shows, particularly on streaming services, are exploiting science fiction’s resonances with the anxieties and movements of our moment, from Luke Cage’s bulletproof African-American protagonist to Brazilian economic dystopia 3% (which includes among its directors César Charlone, the Academy Award-nominated cinematographer of City of God and Blindness).

Amid these big-budget, headline dystopias, telling stories of heightened economic, gender and racial oppression and violent resistance, two smaller contemporary-set science fiction/thriller hybrids, both made for Netflix, offer alternate forms of storytelling and alternate visions of power and change, predicated on uncanny connections. 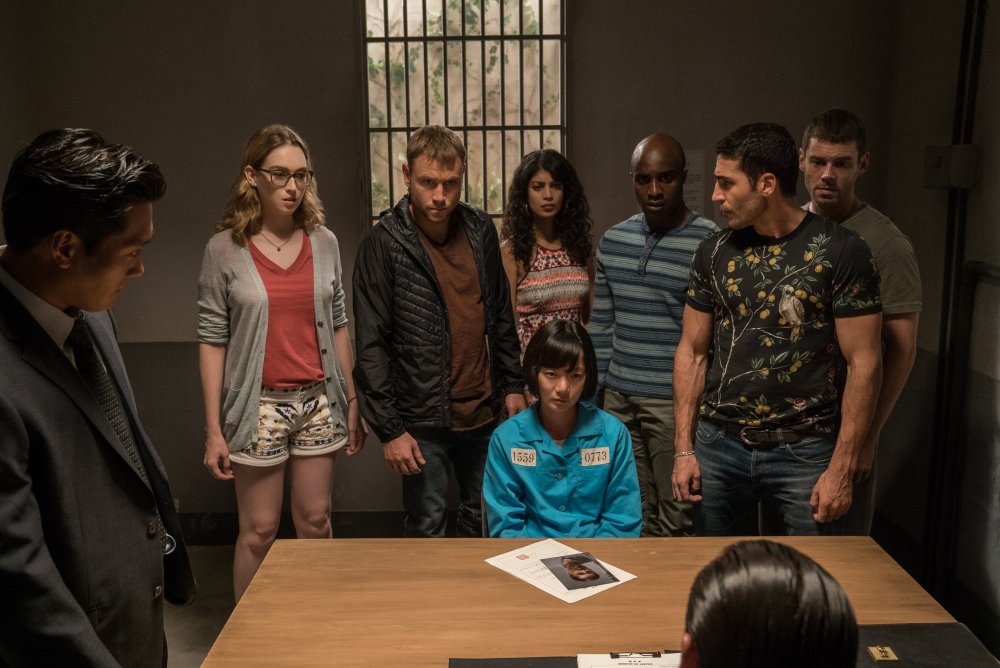 The Sense8 cluster in Sense8, a Netflix series co-directed by Lana and Lilly Wachowski and J. Michael Straczynski

On the surface, Sense8 – which premiered in 2015 and returned for a holiday special in 2016 before this spring’s season two – and The OA, which also joined the streaming service over Christmas, have very little in common. As Boshemia points out, both shows are notable for casting trans actors as trans characters, and both Sense8’s Nomi (played by Jamie Clayton) and The OA’s Buck (played by Ian Alexander) are complex characters integrated into the ensemble casts of their respective shows. Neither are given conventional coming out or transitioning narratives, and nor is their trans identity used merely as a metaphor or analogue for other forms of difference. Two of Sense8’s creative team, Lana and Lilly Wachowski, are trans – though the third showrunner, Babylon 5 creator J. Michael Straczynski, is not; nor are The OA’s Brit Marling and Zal Batmanglij (who also co-wrote the films Another Earth and The East).

The presentation of trans characters might thus seem like a minor detail, signalling the shows’ contemporaneity to what Time magazine named the “transgender tipping point” (with a cover featuring Orange Is the New Black’s Laverne Cox), rather than their genre credentials or any shared narrative strategies. But the question of who inhabits what body, how, and what sensitivities and vulnerabilities that opens up is differently central to both shows. It’s central not only to their stories, but to their key science fictions: the embodied technologies that they imagine. Both shows focus on (and devise beautiful audiovisual strategies to represent) prostheses for profound, extended human connection that combine the physical, the psychic and the cinematic. 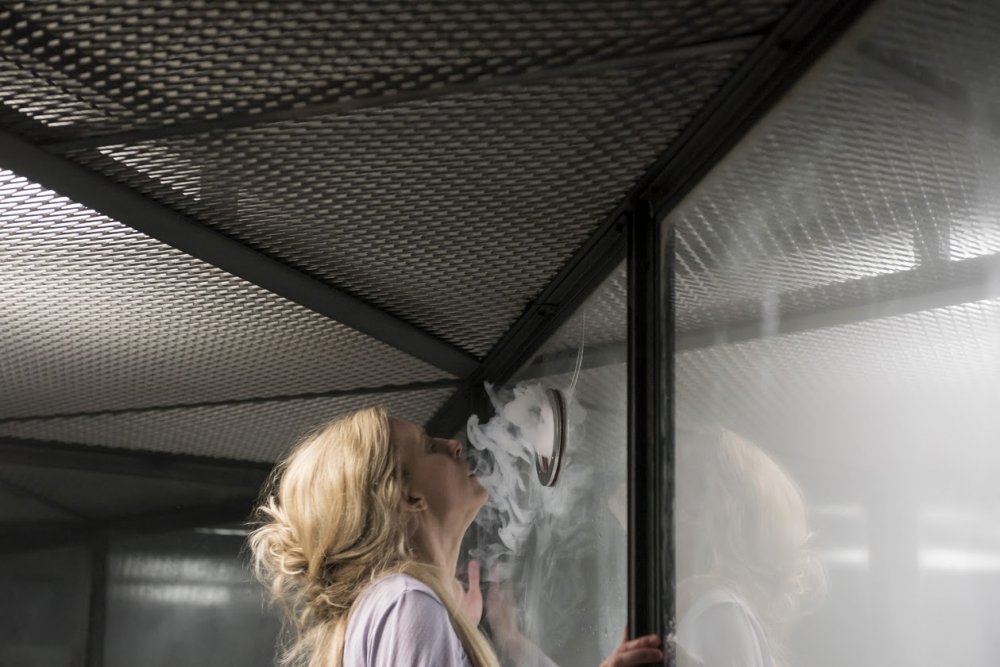 In a sense, their plots (and both shows have been criticised for mystificatory arcs) are less relevant than their unusual formation of ensemble stories. Both shows tell the stories of groups of people who are randomly connected by strange events, and whose connection provides them with the strength to resist trauma, violence and repression collectively. That connection takes hard work and commitment, and puts the characters at risk. In each show there is (of course) a sinister scientist who may be supported by shadowy law enforcement or state agents.

In Sense8 – as the title more or less implies – eight geographically disparate people, who share the same birthday, are reborn as a ‘cluster’ by a previous Sense8 called Angelica; this gives them the power to experience and witness each other’s thoughts, feelings and actions, but also opens them to the surveillance of Whispers, a scientist who hunts and seeks to control Sense8 clusters. 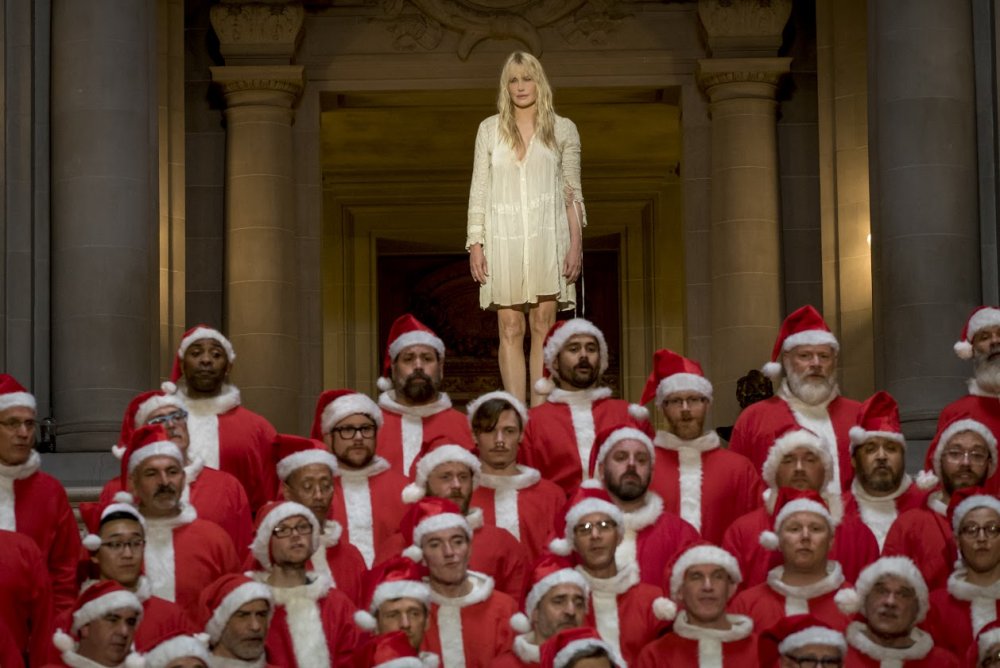 Daryl Hannah as Angelica, the begetter of the Sense8 cluster

In The OA, it is the sinister scientist Hap who brings the first group of five people together, imprisoning them one by one in his basement so he can study them because of their near-death experiences (NDE). Brit Marling’s Prairie, who becomes known as the OA (Original Angel), is the fourth to arrive, and during a second NDE, she receives an insight expressed as a bodily movement, which she teaches to the others with the understanding that the full set of movements (each one given to one of the prisoners during an NDE) can heal people, and possibly transport them out of prison. In the framing narrative, in which she retells her captivity story, she teaches the movements she and the others received to four students (including Buck) and a teacher from a high school near her parents’ house, with the hope of saving the four prisoners she was forced to leave behind.

Both shows counter the dystopian emphasis on, and incitement to, violence in contemporary science fiction such as The Hunger Games by foregrounding the body as vulnerable yet powerful in its sexuality and its creative expression in dance and music. As Gia Kourlas writes for the New York Times, Ryan Heffington’s choreography of the five ‘movements’ received during the NDEs is one of the most powerful aspects of The OA, as the final episode casts aspersions – possibly created by a shadowy FBI agent – on Prairie’s abduction narrative. The two groups of five characters – those imprisoned by Hap, and those brought together by Prairie – rehearse the movements ferociously, in a rare, believable representation of dance training, grounding some of the more abstruse elements of the show in something utterly real: the repeated actions of bodies gaining strength, precision and near-psychic connection, culminating in a courageous real-world final action. 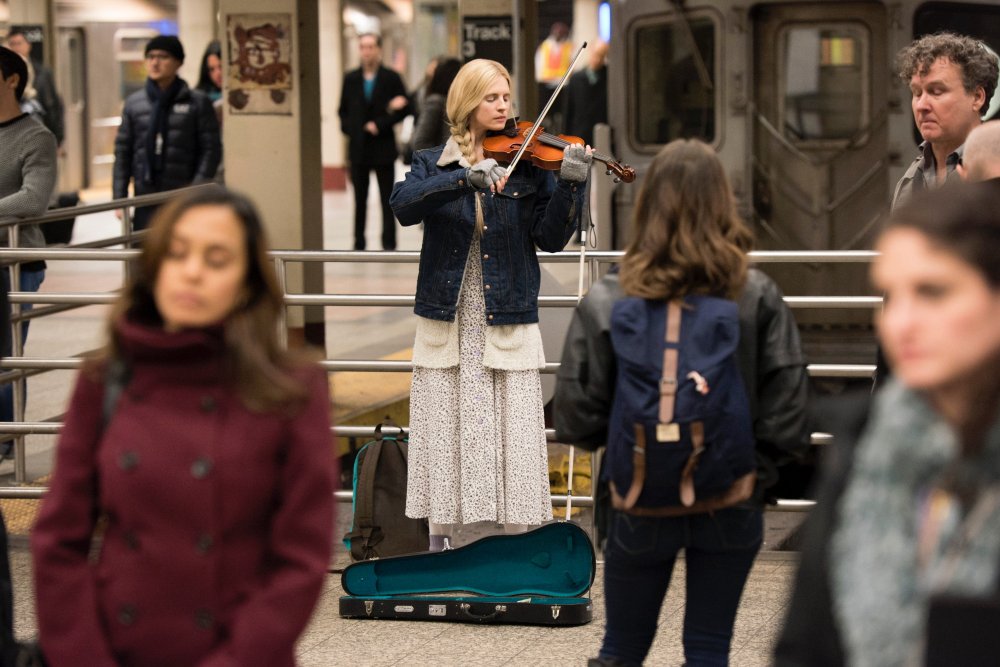 It also creates unity across genders, gender expressions, ages, ethnicities and class lines: the people who respond to Prairie’s YouTube call for listeners are differently ordinary misfits at school and at home, with variously neglectful or absent parents. Listening and dancing unite them.

What they’re united against (other than the spectre of Hap, played with frightening obsession by Jason Isaacs) is implicitly the divisive politics raised by the current election season; Prairie’s hometown, predominantly white working-class, is marked by the economic downturn – she uses a house abandoned halfway through construction to tell her tale. Buck is Vietnamese-American and his friend Alfonso is Latino, and both experience covert racism, not least in their teachers’ expectations about their future.

Collectivity across differences is even more marked in Sense8, even as Angelica, played by Daryl Hannah, inhabits a similarly white-skinned, fragile femininity to Marling’s embodiment of the OA. The place of angel lore in both shows is marked but hard to read: these angels in America are straight, cisgendered white women terrorised and kidnapped by violent white men, but they also build – and indeed need – coalitions that mirror those currently forming against the US administration. Sense8 channels the fantasy of post-racial globalism that condemned the Wachowskis’ adaptation of Cloud Atlas to ridicule, but pairs it with the more hard-nosed anti-capitalist critique of the first Matrix film. 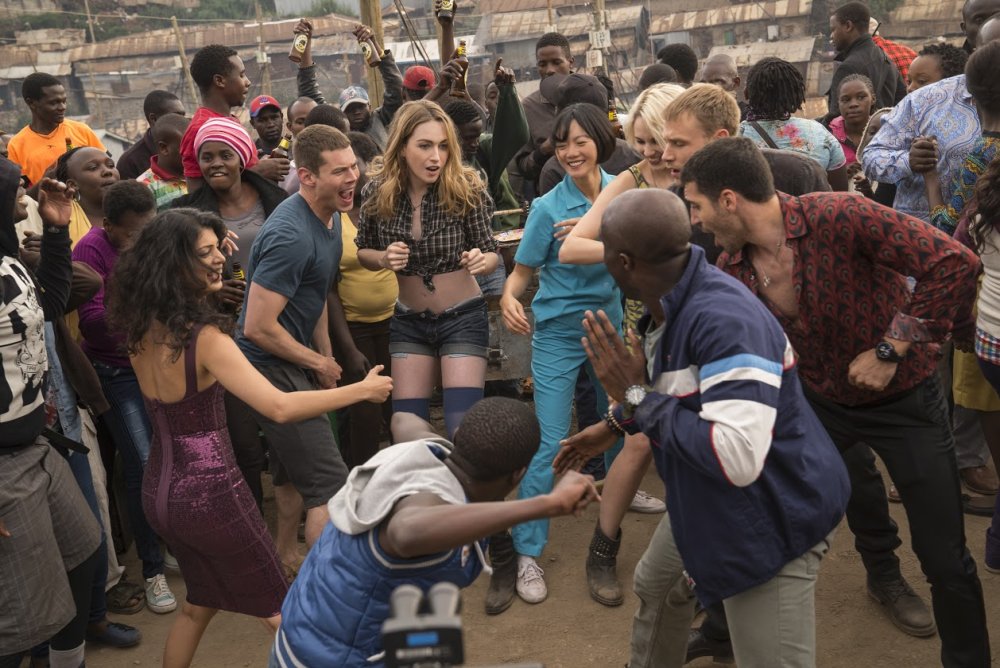 Jamie Clayon as Nomi in Sense8

Nomi is central to this configuration: she is a blogger and hacker by trade, part of the overlapping LGBTQI and alt.tech communities in San Francisco. When she is ‘rebirthed’ by Angelica, she is hospitalised after connecting to one of her Sense8 cluster causes her to fall from her motorbike during a Pride parade, and almost subjected to brain surgery before being busted out by her girlfriend Amanita with the help – from a distance – of Chicago cop Will Gorski, one of her cluster.

The escape sets out the high stakes for the cluster to learn how to interact with each other across global distances: other characters are based in Seoul, Nairobi, Mumbai, Mexico City, Berlin and London/Reykjavik, and several have professions, hobbies or experiences that place them in proximity to violence. Even the most pacifist and protected character, Mumbai-based chemist Kala, witnesses her father-in-law’s murder by political opponents, and knows how to use household chemicals to make a bomb, helping out Berlin-based safecracker Wolfgang when he faces the head of a rival criminal gang. 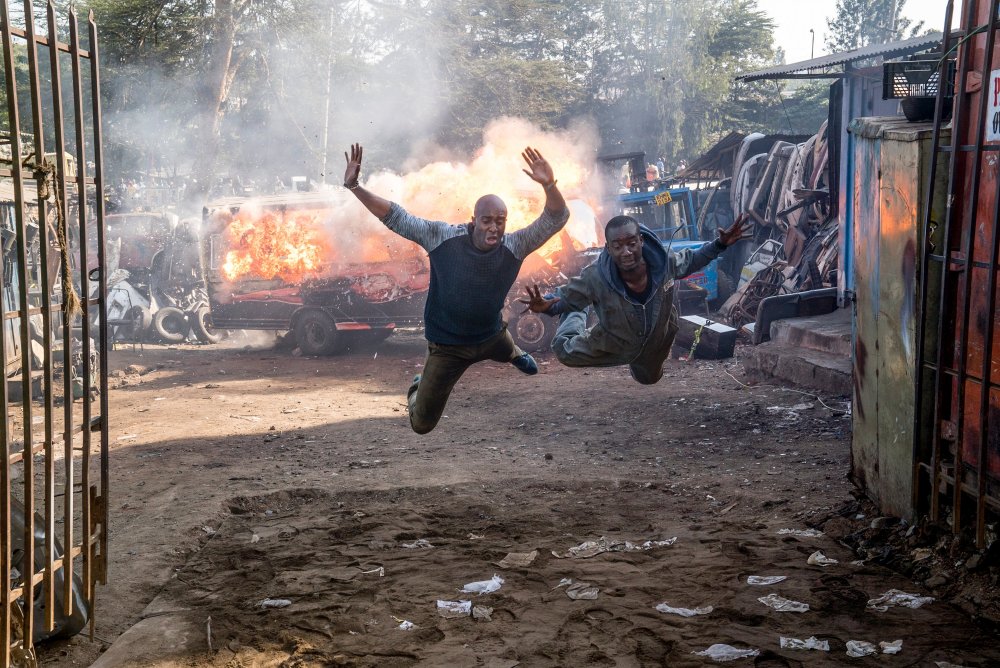 Sense8 offers far more typical mainstream genre rewards, including high-speed car chases (courtesy of Nairobi-based matatu driver Capheus) and martial arts expertise (via Seoul-based banker/kickboxer/prisoner Sun Bak), while parodying them through the career of Mexico City-based blockbuster leading man Lito Rodriguez, whose experience of choreographed gunplay comes in handy. The cluster lend each other skills and support through a combination of advice and inhabitation: in a given scene, two or more cluster characters might have a conversation that moves between two or more cities, and one character may inhabit another character’s body/position on screen.

Thus, the generic conventions are given a heightened edge by being shot across multiple locations, with the most startling effects – and the basic science-fictional concept of the cluster’s connection – being achieved through two simple cinematic devices: match-cutting, and highly skilled physical and camera choreography. Alongside more adrenalised action numbers, the show reserves its most sophisticated match-cutting for scenes where up to eight cluster members share an intense sensory experience, with season one, episode five introducing the idea that the cluster might share each others’ sexual experiences, while in episode seven they collectively remember their own and each others’ births. 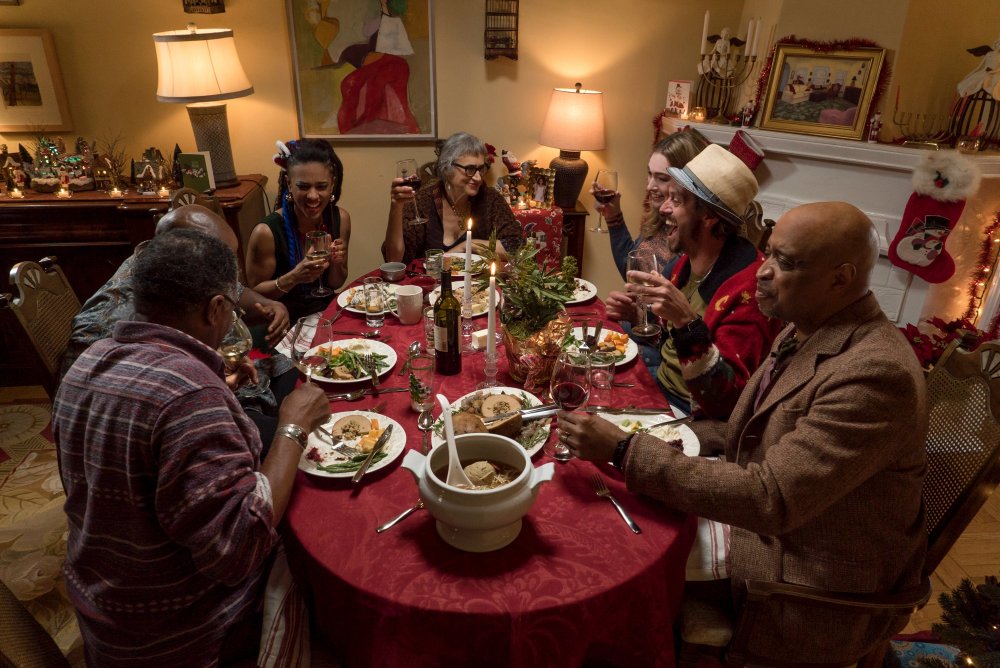 The Christmas special (retitled Happy F*cking New Year) took this further: over two hours the episode moved through a year in the cluster’s life, structured by significant festive events – their shared birthday, Christmas – that provided opportunities for multi-location match-cut extravaganzas: a dance party that happened simultaneously on an Italian beach, in a Korean prison cell, in a Mexican nightclub and a San Francisco park, moving into an explosive multi-bodied, multi-location sex scene that was as incredible a technical achievement as it was powerful a statement of LGBTQ (and, although commenters have debated this, multiracial) inclusion.

Reflective of – and perhaps reflecting on – the changing consumption of audiovisual narrative via streaming media services, the Sense8 holiday special offered a new form of what Michel Foucault called “ritual time”, an opposition to the linear time of work. The OA’s dual-narrative structure, which sees a group of people returning night after night to sit in a cold house and listen to a story, similarly invokes the power of (and our need for) older forms of ritual, performative connection; even before the five movements are introduced, the sharing of space and story sets the tone. Yet these pleas to share physical spacetime seem counter-intuitive when screened on streaming services that fracture the shared experience of both cinema viewing (sharing physical space) and television viewing (watching at the same time). 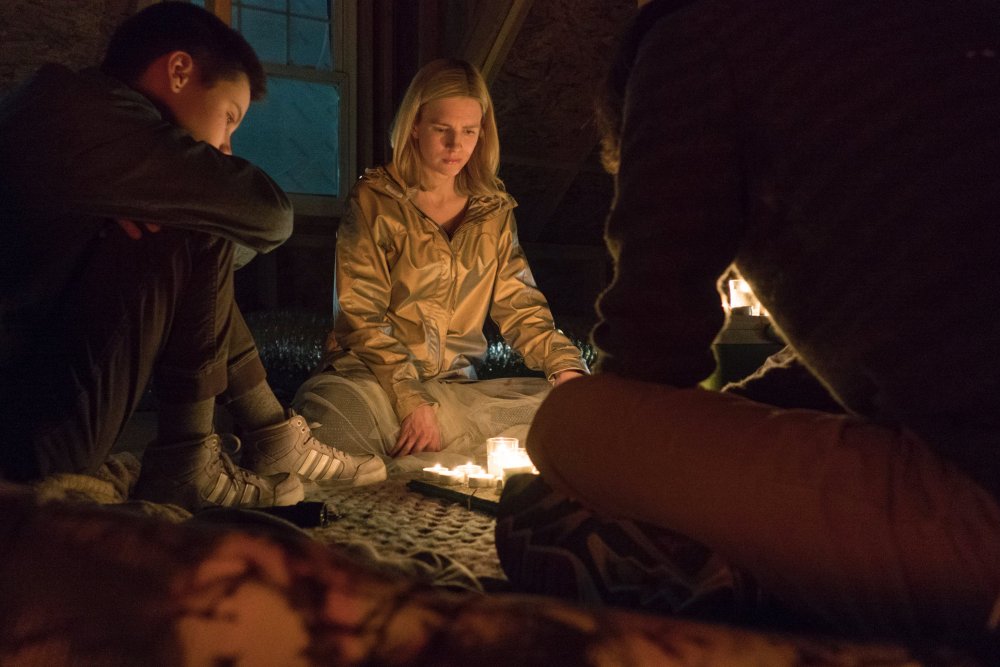 San Franciscan Nomi represents both the older Bay Area alt.culture dream of a digitally connected, radically democratic global village, and the dot.com boom in services that appear to atomise and create bubbles. Prairie/OA uses YouTube (owned by Google) to reach out to potential listeners, and her listeners find a video on the service that gives them some evidence for her story.

Both Sense8’s cluster technology and The OA’s movement technology offer a hint of the same dream of intimate connections, earned by serious commitment to coalition and effective over great distances, whether geographical or temporal or identitarian. Set in the (more or less dystopian) present day, both shows hold out the possibility – and urgency – of such connection here and now… albeit one that you can only access by boosting the fortunes of Trump adviser Carl Icahn, a substantial investor in Netflix.