Inside out: Orange Is the New Black

With its bourgeoise prison initiate Piper Chapman as a Trojan blonde prising open mainstream TV to a view of America’s female prison underclass in the round, Jenji Kohan’s SVoD hit has made screen diversity the hottest ticket. 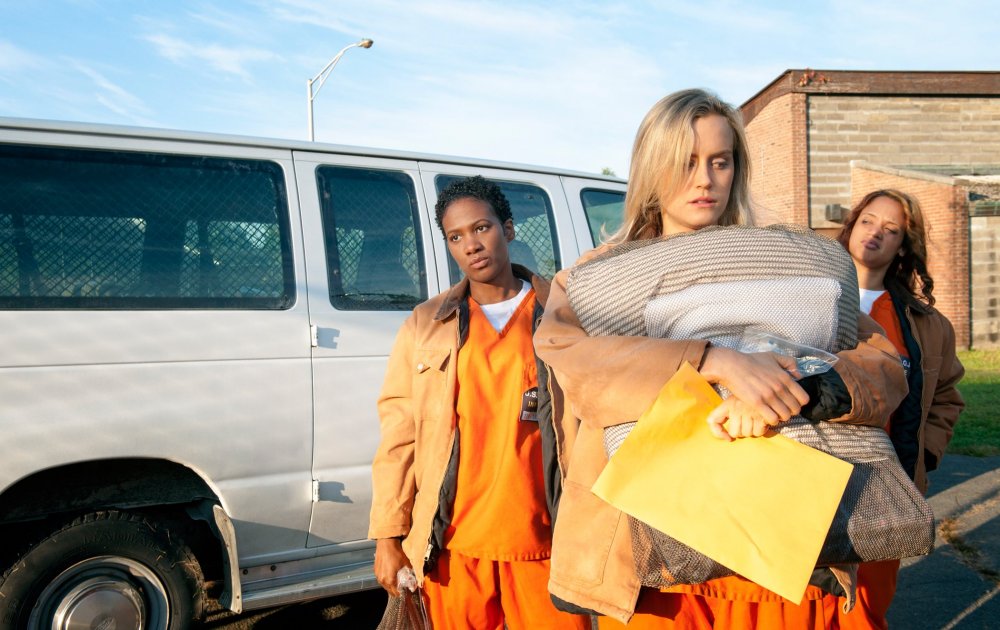 When Orange Is the New Black’s debut season aired on Netflix in the summer of 2013, the response was almost unanimously positive, particularly among young LGBTQ viewers. A witty, thrilling US women’s prison drama based on Piper Kerman’s memoir Orange Is the New Black: My Year in a Women’s Prison, OITNB not only passed the Bechdel test but wore its intersectional feminist heart tattooed brightly on sleeve, creator and executive producer Jenji Kohan helming a crew and cast more intentionally diverse than anything preceding it.

Orange is the New Black is available on monthly Subscription Video on Demand from Netflix.

A number of critics complained that framing a series featuring so many women of colour through the lens of thin, white, middle-class protagonist Piper Chapman (played with commendably doe-eyed comedic timing by Taylor Schilling) undermined its gains. Writer Aura Bogado went so far as to call this a modern-day slave narrative for the internet age. But three series in, it’s clear that Piper – doing time in low-security clink Litchfield for a decade-old drug-trafficking offence exposed by ex-girlfriend and fellow inmate Alex Vause (Laura Prepon) – is the Trojan Horse Kohan promised us from the get-go:

“You’re not going to go into a network and sell a show on really fascinating tales of black women, and Latina women, and old women and criminals. But if you take this white girl, this sort of fish out of water, and you follow her in, you can then expand your world and tell all of those other stories. But it’s a hard sell to just go in and try to sell those stories initially. The girl next door, the cool blonde, is a very easy access point, and it’s relatable for a lot of audiences and a lot of networks looking for a certain demographic. It’s useful.” 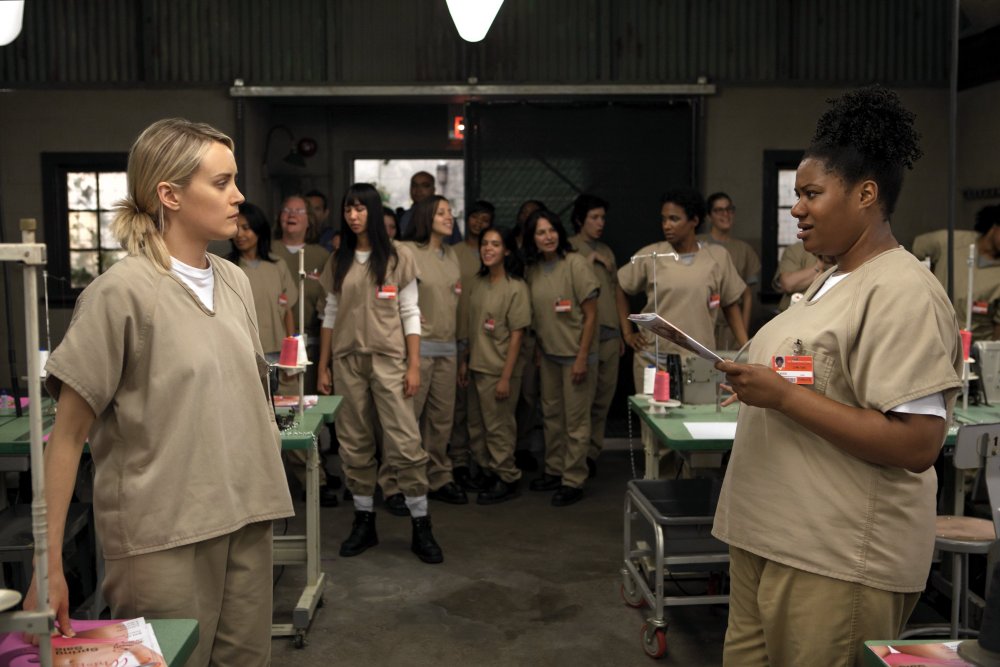 Piper is more than a Trojan Horse, though – she’s a totem of white privilege, and Kohan invites us to relish the flogging she receives at Litchfield’s violent, dilapidated, bug-infested bedlam. Spa dates are replaced with grim communal showers, normcore clothes with prison-issue jumpsuit and the fledgling artisanal bath-product business she had pre-prison with the contraband and commissary pap that make up Litchfield’s internal currency.

Kohan’s adept at this study of self-absorbed bougie woman in criminal freefall after steering long-running Showtime series Weeds, which chronicled the exploits of housewife-turned-pot-kingpin Nancy Botwin. The same wry, shank-sharp wit is at work here, lacing the frequently dark prison plotlines – rape, menopause, addiction, gang violence – with expertly weighted humour; if we root for Chapman’s lost rich girl, it’s because, like model Rachel Robert’s trophy blonde in Rihanna’s Bitch Better Have My Money video, she’s the epitome of self-absorbed affluence; watching her cut down to size by the women her privilege had sheltered her from is deliciously gratifying.

Unlike Roberts, Piper offers a more complex antihero. As her clueless, country-club deb scrambles to navigate Litchfield’s fraught, high-stake rules (official and unofficial) and find her place among the mostly race-aligned cliques, we marvel at her naivety, her hardwired sense of entitlement as the system slowly breaks her down. 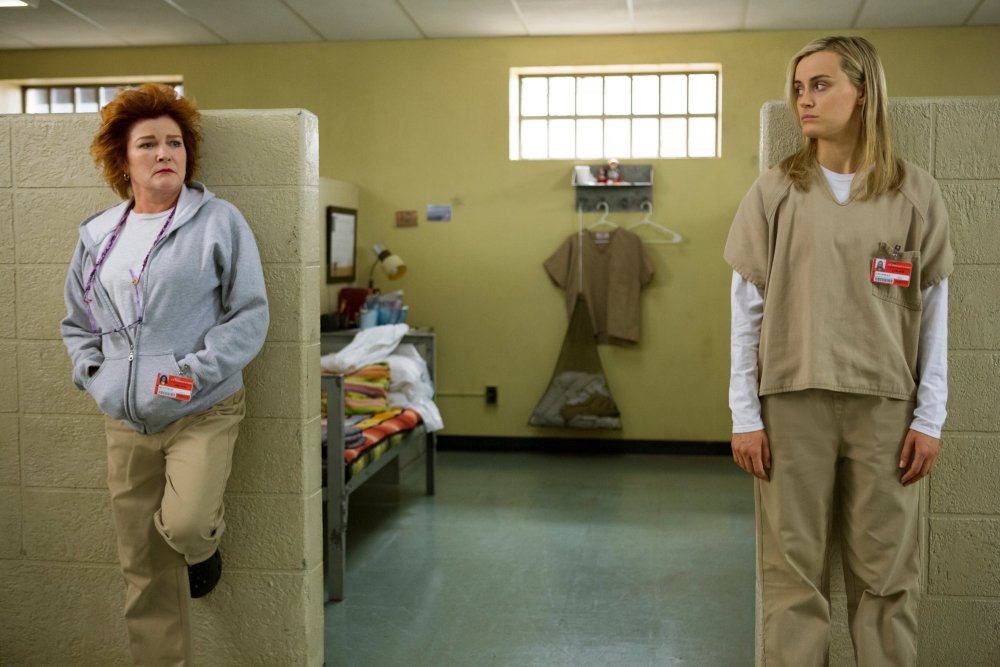 Kohan works plenty of comedy mileage out of Piper’s haplessness throughout season one, but it’s also in the trouble that fecklessness produces that the promise of growth – a kind of reverse rehabilitation – manifests itself. It’s only when she accidentally insults Galina ‘Red’ Reznikov, the magnificently august Russian-American matriarch played by Kate Mulgrew (late of Star Trek’s USS Voyager), that Piper truly realises her predicament; all that polite, intellectual New England charm – so effective on the outside – is redundant here among the criminals and psychopaths. Forced to employ a combination of humility, moxie and sacrifice, she ends up procuring then chewing a pile of hot chilies to produce a DIY-style Deep Heat balm for Red’s arthritic back – a reprieve-worthy gambit.

As Litchfield sands off her soft edges, Piper’s character evolves. When a troupe of delinquent teens are brought in for a tour of Litchfield towards the end of season one, it is her – not the stereotype-aping convicts – that put the fear of prison into them. By the close of season two Piper has dumped Larry (Jason Biggs), the hapless fiancé she left on the outside, for a volatile reunion with Alex, earned the safe indifference of her peers and – as a benchmark measure of her transformation – even finds herself losing patience with the younger version of her old self in new inmate Brook Soso (Kimiko Glenn). 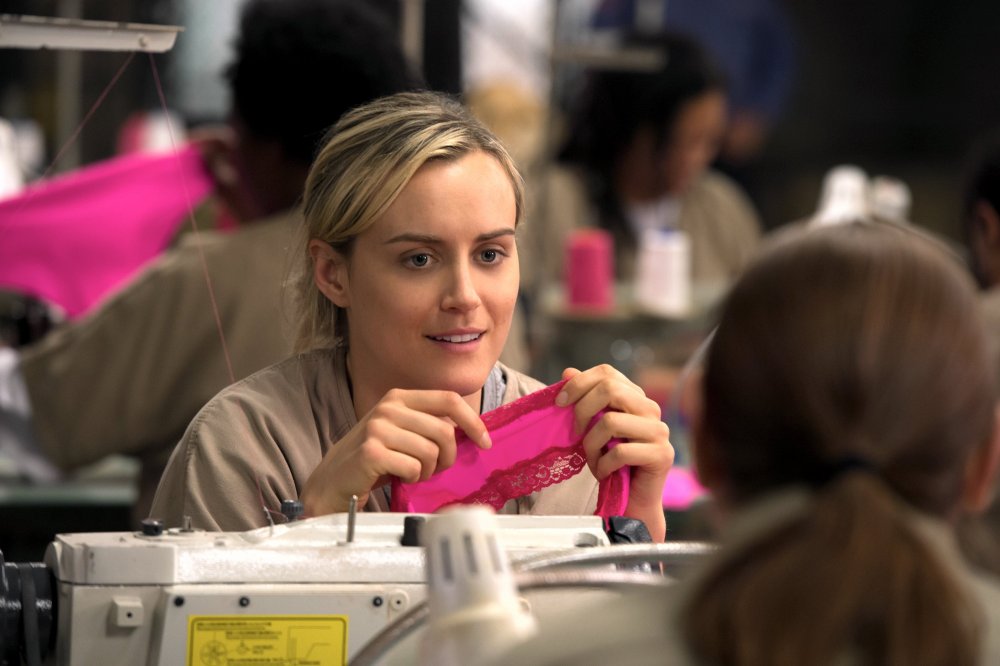 Come season three, Piper’s a fully fledged jailbird, graduating from witless blonde to savvy crime boss, overseeing a cottage industry selling used prison panties to fetishists (another to-good-to-be-true plot-line based on real life events). Is this proof she’s learnt to fend for herself, sans trust fund? Or has prison merely fomented some innate, white-capitalist instinct? When the inmates she employs to grease those panties find out she’s paying them a pittance and form a union to demand a better wage, it seems the answer is: both.

The sprawling cast of characters Piper orbits are just as, if not more, compelling than the series’ figurehead we all love to hate. Heartbreaking, inspiring and hilarious by turns, their origin stories – like Piper’s – are told gradually, piecemeal, through compelling flashbacks. Making sense of the inmates individually – who they are, how they came to be at Litchfield, how they navigate their sentence and each other – is the crux of OITNB’s charm. 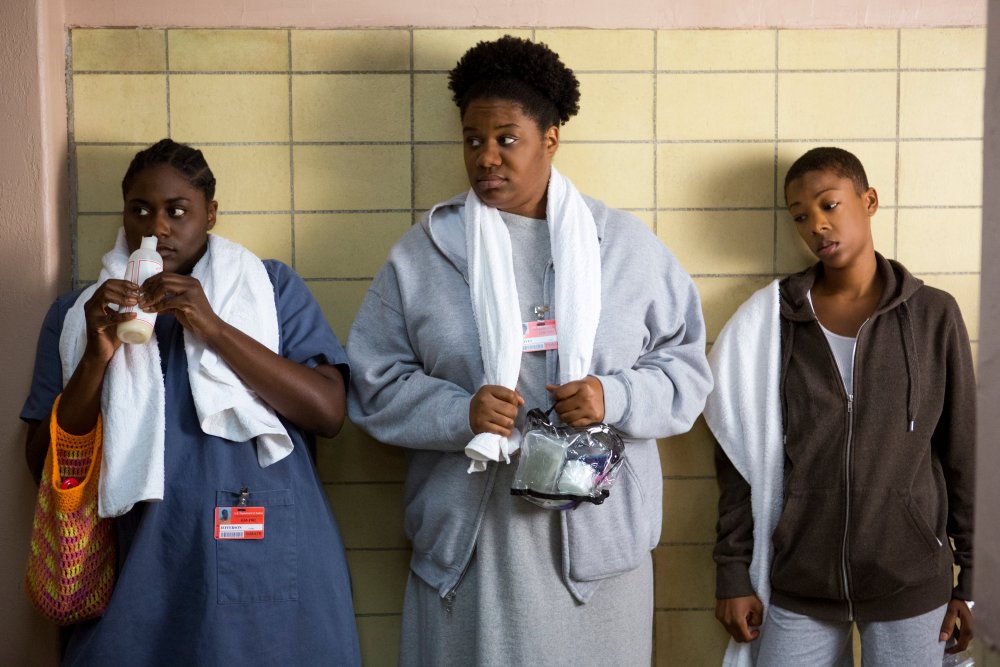 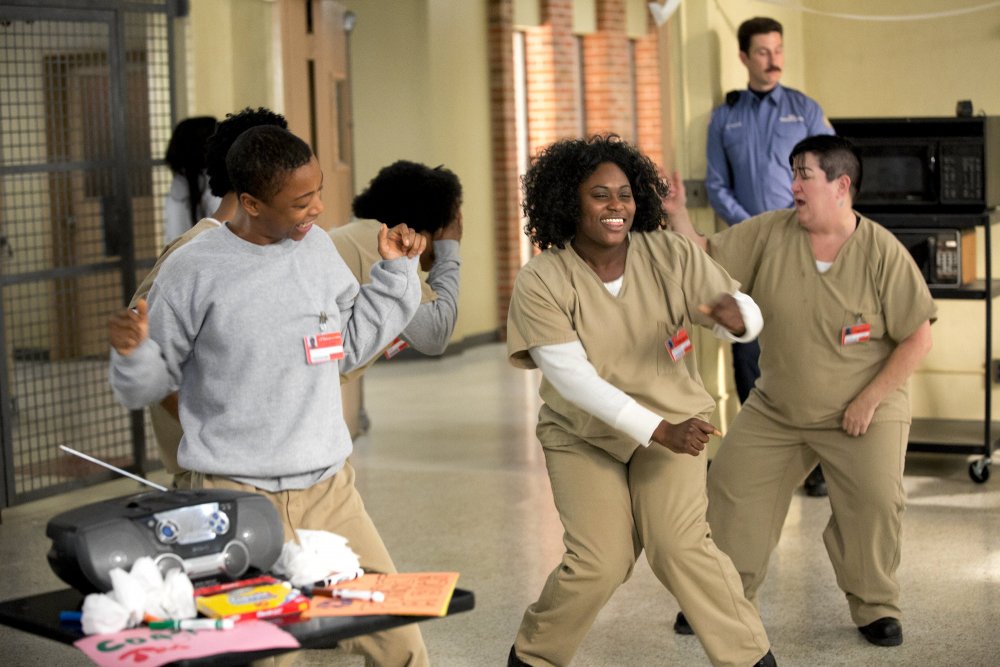 This affectionate and tender bond is jeopardised in season two, when Taystee’s Machiavellian foster mother Yvone ‘Vee’ Parker (Lorraine Toussain) arrives at Litchfield and wastes no time commandeering the circle, turning the crew into drug dealers and instigating a violent bathroom turf war with the Hispanics in the process. Vee’s grooming and exploitation of Crazy Eyes – and the upsetting scenes this produces – is supremely acted and deeply uncomfortable viewing.

These constantly shifting inmate dynamics – romances, feuds, friendships, allegiances – are compelling stuff, but the power struggles between the prisoners and the mostly male prison staff provide some meaty plot-lines. Kohan ensures the guards, as much as Piper, are complex, layered characters rather than slotting them into any rote villain/protector binary – men struggling with their respective definitions of masculinity in a women-centric space. We see a surprisingly vulnerable side to Pablo Schreiber’s gloriously sleazy macho man George ‘Pornstache’ Mendez (graduate of the Jim Fenner school of screws) in season two, while Councillor Healy (Michael Harney) vacillates precariously between harmless, grey-haired grandpa and vicious, immature homophobe throughout – with sometimes dire consequences for Litchfield’s most vulnerable inmates. 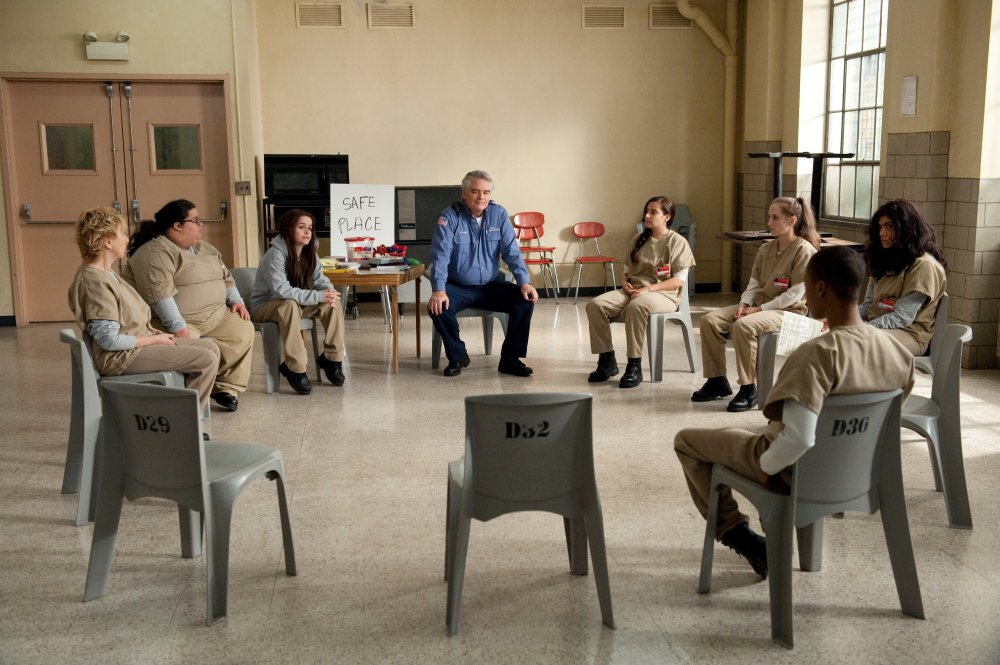 OITNB is a show about women, and how we survive a society so thoroughly rigged in patriarchy’s favour. It’s about the joy and pain of female relationships, and the ingenious, wonderful and desperate things women do to survive life behind bars.

Kohan – working closely with Kerman, who left prison and became an active advocate for reform – is careful to root every drama and plot to real, historic and current socio-political issues. Haitian old timer Claudette Pelage (Michelle Hurst)’s story of exploitative child labour speaks to the ongoing crisis that is immigration; trafficking in the west is an issue which Diane Guerrero, who plays Maritza Ramos’s tough Latina hood princess, has articulated first-hand knowledge of off-camera; Sophia’s struggles to access hormones and with transphobic violence address the real and tragic issue of trans folk’s fettered access to essential healthcare and treatment in prison. And in season three – when Litchfield is privatised – we see the multitude of ways the corrupt prison-industrial complex puts profit before human life. Very little here feels superfluous, with the forgivable exception of Ruby Rose’s gratuitous nude scene in season three. 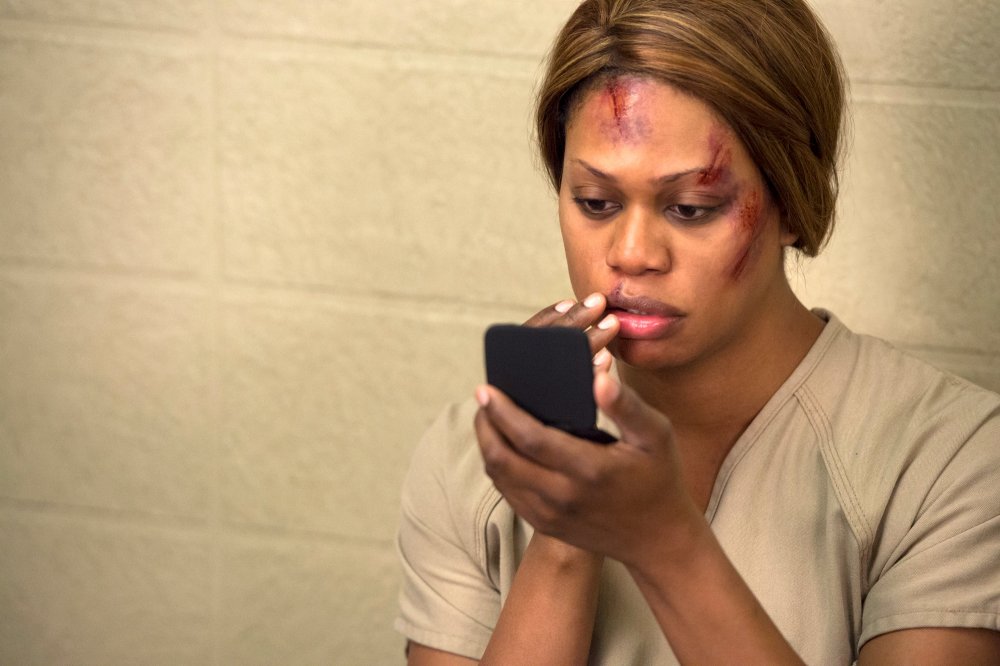 Gripping (and frequently hilarious) plots, razor-sharp dialogue, a talented, diverse cast and ubiquitous queerness elevate OITNB above prison dramas of yesteryear. This is TV finessed for an intersectional, privilege-checking era – not just savvy to the (white cis middle-class) male gaze but flipping it the bird. While out lesbian characters are slowly filtering into mainstream programming, they’re still frequently cliché, tokenised or killed off – victims of the dead lesbian trope.

Litchfield isn’t without its casualties, but on the whole its various queers are believable and investment-worthy, from Poussey’s adorably cheerful boi and Crazy Eyes’ Shakespeare-quoting weirdo to intellectual pin-up Alex Vause aka ‘the Betty Page of Litchfield’, as Boo christens her. The tangled, romantic dance that Piper and Alex do is compelling, nuanced and sexy where, in other hands, it might have felt exploitative. 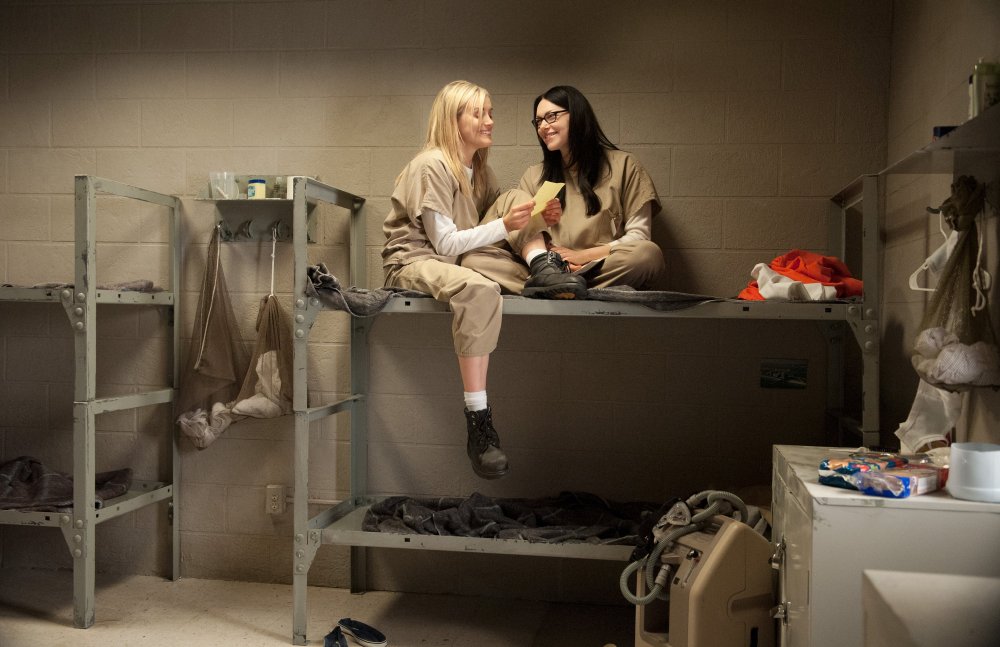 With so many diverse LGBTQ women – stretching across age, race, size and creed – OITNB feels for many (this writer included) like the progressive, politicised next-gen answer to Ilene Chaiken’s much-missed, groundbreaking Showtime series The L Word – an enjoyable coincidence given that Chaiken’s first post-L Word project was slated to be a women’s prison-based spin-off called The Farm.

It’s far from niche queer viewing, though; OITNB’s reach into pop culture has made each new season an occasion event, warranting a zillion memes, binge-viewing TV parties and prison-themed gatherings, not to mention the ‘no OITNB spoilers please’ requests that proliferate online when social media users have to wait till work is over to devour a new series. Long may Litchfield’s finest reign.

Related to Inside out: Orange Is the New Black