Jessica Jones: the antihero we need

Marvel’s TV series brings us the superhero as super survivor. 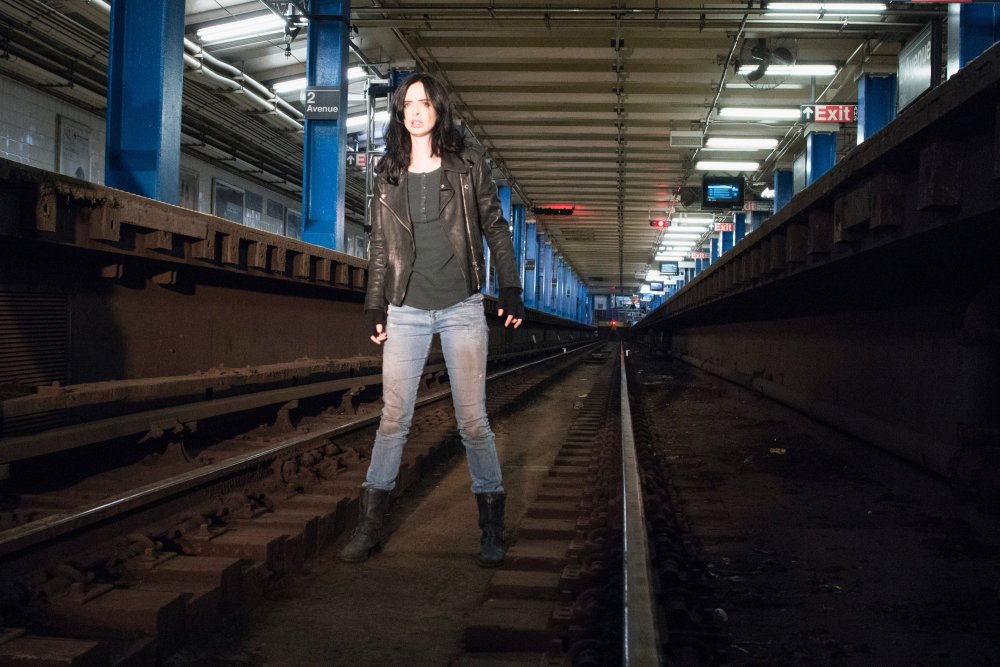 Despite a fretful wait, in which showrunner Melissa Rosenberg (Dexter, The Twilight series) and fans worried that upcoming title The Defenders would see Jessica Jones shuffled down the Marvel-Netflix priority list, we now know that season two of the acclaimed, Krysten Ritter-fronted series is officially afoot.

Season 1 of Jessica Jones is available to stream on Netflix.

Ritter (Breaking Bad, Don’t Trust the B**** in Apartment 23) brings the titular protagonist of Brian Michael Bendis’s Alias comics to life with a jaded panache in series one. A morose, alcoholic PI in the noir tradition, she hustles the streets of Hell’s Kitchen in a uniform of biker jacket and skinny-fit denim, delivering dry one-liners against a cracked, midnight-jazz soundtrack. Her office, like her psyche, is run-down and barely functional, nestled in the same ’hood that’s home to Charlie Cox’s Daredevil (who doesn’t make a cameo) and Mike Colter’s Luke Cage (due his own spin-off show), who plays a supporting role as Jones’s ally and love interest.

Despite the unusually high quotient of gifted inhabitants in this neighbourhood, there are zero capes in sight – just disenfranchised heroes working dead-end jobs. Jones’s powers – extreme strength, the ability to jump enormous heights – are handled with a nonchalance bordering on apathy, not a gift to be glorified in star-spangled spandex, but just another thing that marks her as ‘other’, a skill wasted in the service of ferreting out the city’s dirty secrets. 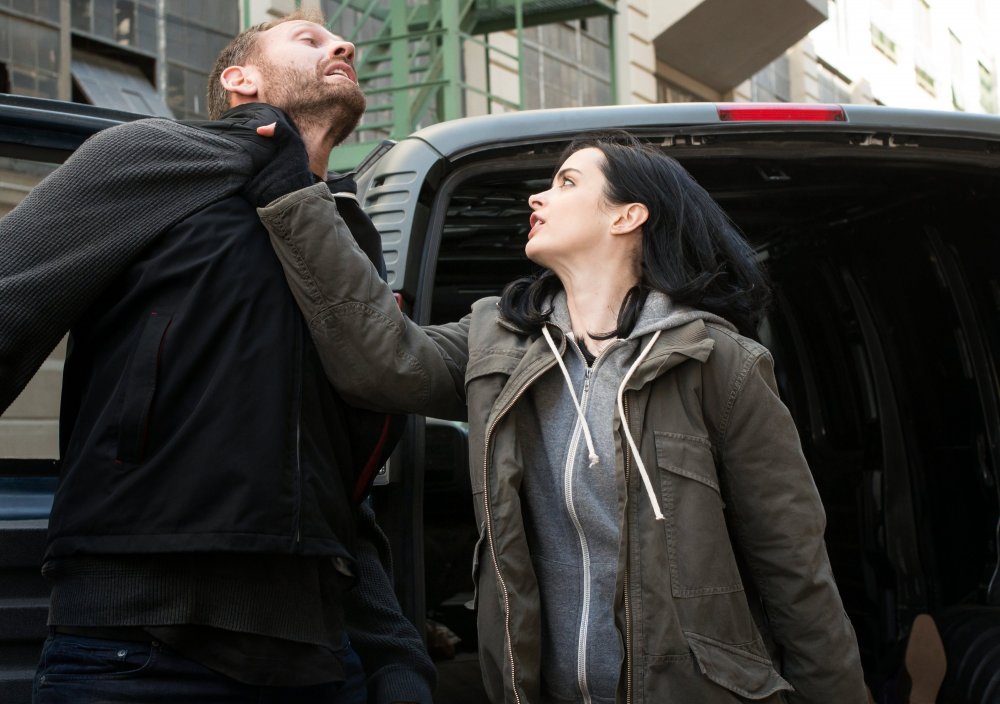 Ritter never quite convinces as a high-functioning drunk – she’s too clear-eyed and fresh-faced, awkwardly elegant with a whisky tumbler where a true inebriate would be practiced and familiar. There’s also little to no chemistry between her and Colter, who brings gravitas and sensitivity to his role as Marvel’s unbreakable New Yorker. But the well-chosen sets, from swanky offices and manicured parks to shadowy side streets and sooty subways across Manhattan, Brooklyn and Queens, give the series a cold, gritty 70s-NYC meets gentrified, Noughties Village feel. And as a weary, burnt-out survivor labouring under the immense weight of PTSD in a grey city, Ritter is utterly, brilliantly convincing.

The horrors that her (also supernatural) abuser, David Tennant’s Kilgrave, played on her are revealed in eerie flashbacks and tense dialogue as this long-absent abuser edges his insidious way back into her life, corroding the safety net she’s desperately knitted for herself – work, analgesics, mantras, isolation. Kilgrave’s powers are absolute mind control, and under his spell he reduced Jones to a plaything – not just totally submissive, physically and emotionally, hurting herself and others at his whim, but forced to smile throughout the ordeal, a Wednesday Addams-like rictus. 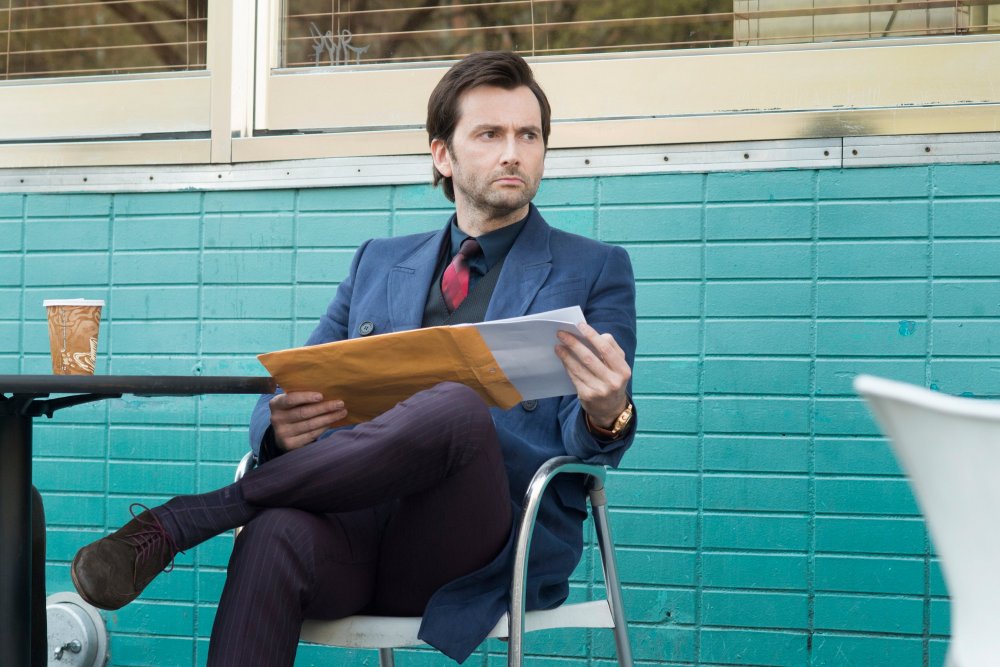 It becomes clear, within the first two episodes, that Jessica Jones is not a show about superheroes: it’s a scalpel-sharp dissection of patriarchy at its most abhorrent, a harrowing examination of power, control, abuse and trauma – and the superhuman strength required to survive all that. Kilgrave’s powers may seem extraordinary, but the parallels are all too clear: he moves through the world with the same cruel anonymity as internet trolls, the same invulnerability that, in the US, allows 68 per cent of sexual assaults to go unreported and 98 per cent of rapists to escape sentencing. His power is every man’s – a weapon that robs women of agency and recourse.

Rosenberg and Ritter’s triumph is articulating the invisible, long-lasting damage that assault wreaks – and doing so with dynamic plots and characters rather than the easy, lazy shock of the now-familiar rape scene, an egregiously common device that viewers are increasingly rejecting. “We’ve seen plenty of it on television,” explained Rosenberg, “and I didn’t have any need to see it; but I wanted to experience the damage that it does.” In this way, Jessica Jones recalibrates survivor discourses, redirecting our gaze from the formulaic, voyeuristic spectacle of rape (as a standalone incident) to a deeper, nuanced understanding of it as a dynamic. The result is a protagonist defined not by her trauma but her survival, a woman fighting to reclaim her body and her mind in a world rigged to privilege her abuser.

Tennant cuts a frighteningly realistic figure as the psychopathic Kilgrave – a dapper, good-looking, cis white man who is not only maddeningly incapable of recognising and owning his own violence but also expertly practiced at gaslighting his victims, redirecting their blame back at them. After such an ordeal, is it any wonder Jones is callous, bitter, cynical? As Kilgrave moves in for the kill, her already-precarious moral code worsens: she uses the few, vulnerable people around her for emotional and practical leverage, lying and manipulating her way to her target. 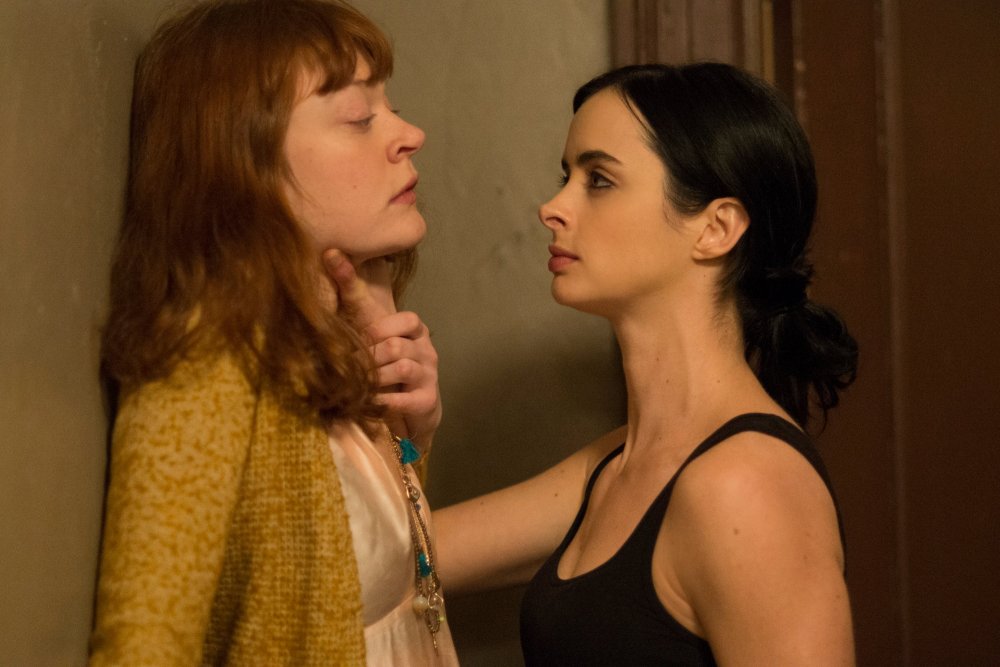 These transgressions are part of what make Jones such a compelling lead. She’s not a pure, faultless victim; she’s real, imperfect, surviving the only way she knows how. She’s a rare example of female anti-herodom, as Rosenberg has pointed out to Rolling Stone: “Networks have been slow to let women into that circle… to allow for a woman to be morally ambiguous and at times ugly as a person in the same way that Tony Soprano and Walter White were.”

Jones has more than a few repugnant moments: when she’s fatphobic, mocking a woman for stepping off the treadmill to reach for a cheeseburger; when she manipulates her vulnerable, drug addict neighbour Malcolm (Eka Darville), setting him up to take her fall; when she beds Cage, trying selfishly to assuage her secret guilt over murdering his late Reva (at Kilgrave’s command), a killing blow that wrenched Jones free of her captor’s mental control but left her with a lifetime’s worth of self-hatred.

This part of the plot has provoked some rounded criticism from bloggers. “One has to wonder,” posits Shaadi Devereaux, “what metaphor is offered, that she has to kill a Black woman in order to finally obtain that freedom. She must literally stop Reva Connors’ heart with a single blow in order to experience her moment of awakening… Like Jessica’s liberation is only possible through the violence against Reva, we see sharp parallels with how liberatory white womanhood often interplays with the lives of WoC. Were the writers consciously aware of these parallels, or was it just the same script playing out in their heads?” 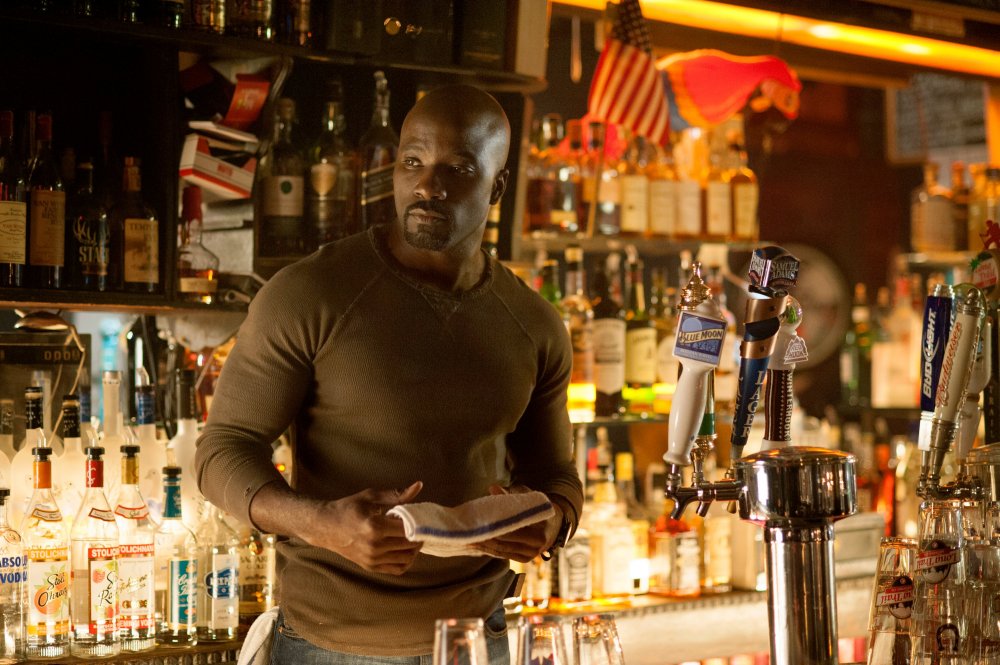 It’s a pertinent question. The answer, ultimately, is that this what feminist parity on screen looks like: women being courageous and awful, having the potential to be either, or both simultaneously. Moral ambivalence in female characters are specifically engrossing because it is women, on- and off-screen, who continue to be held to standards that their male counterparts historically transcend. There is value in seeing women behave badly, in unpacking that discomfort; in Jessica Jones’s case, the plot and script are shaped in ways that asks us to both valorise and critique her, to question her impulses and actions.

In this way, she joins a tradition of fascinating female anti-heroes, women balancing conflicting selves and needs: Mia Kirshner’s Jenny Schecter (The L Word), Eddie Falco’s Nurse Jackie, Julianna Marguiles’s Alicia Florrick (The Good Wife). As Laura Snapes points out in regards to criticism surrounding the upcoming Bridget Jones film: “Demanding feminist perfection from characters and creators who never made that their intention limits women’s art, and its potential for teachable moments.” 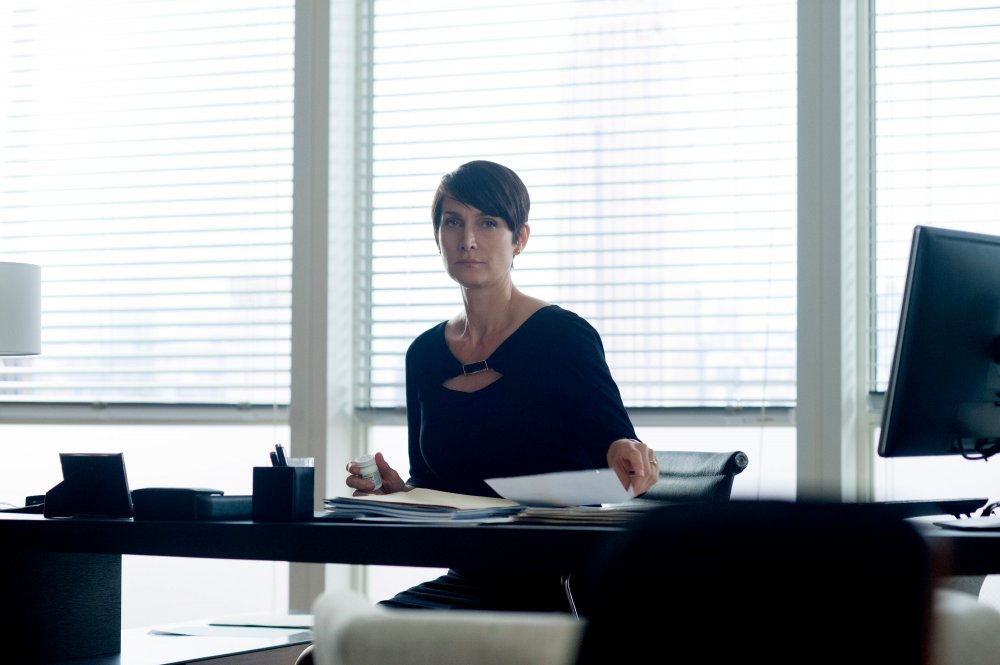 There’s a discernible difference between Jones and her associate Jeri Hogarth (Carrie-Anne Moss) – a calculating, cutthroat lesbian lawyer for whom Jones freelances in an investigative capacity. While Jones is painfully aware of her crimes, numbing her guilt with rotgut whisky, Hogarth seems to feel very little regret as crushes others in pursuit of her own pleasure. She is Jones’s shadow self, merciless and cool next to the sleuth’s loving, selfless bestie-slash-adoptive-sister, TV star Trish Walker. These women, and the victims Kilgrave uses to taunt and bait Jones into a confrontation with him, make for a motley family, the precarious tether that keeps Jones from complete self-destruction.

The men that orbit Jones’s life are also dynamic and nuanced – Cage, supernaturally strong but emotionally vulnerable; Malcolm, a gentle soul struggling with his own trauma and addiction. These two are good people laid low by circumstance, contrasting directly with Kilgrave – the charming white man who turned out rotten despite every privilege he was born with, and Simpson – the cop turned ’roid rager whose compulsion to ‘protect’ Trish after assaulting her (at Kilgrave’s command) becomes just another, less obvious form of paternal control. As Lili Loofbourow suggests, the dodgy red pills that Simpson pops are a cunning in-joke at geek-culture bros’ expense – a deliciously meta fuck-you to GamerGate MRAs. 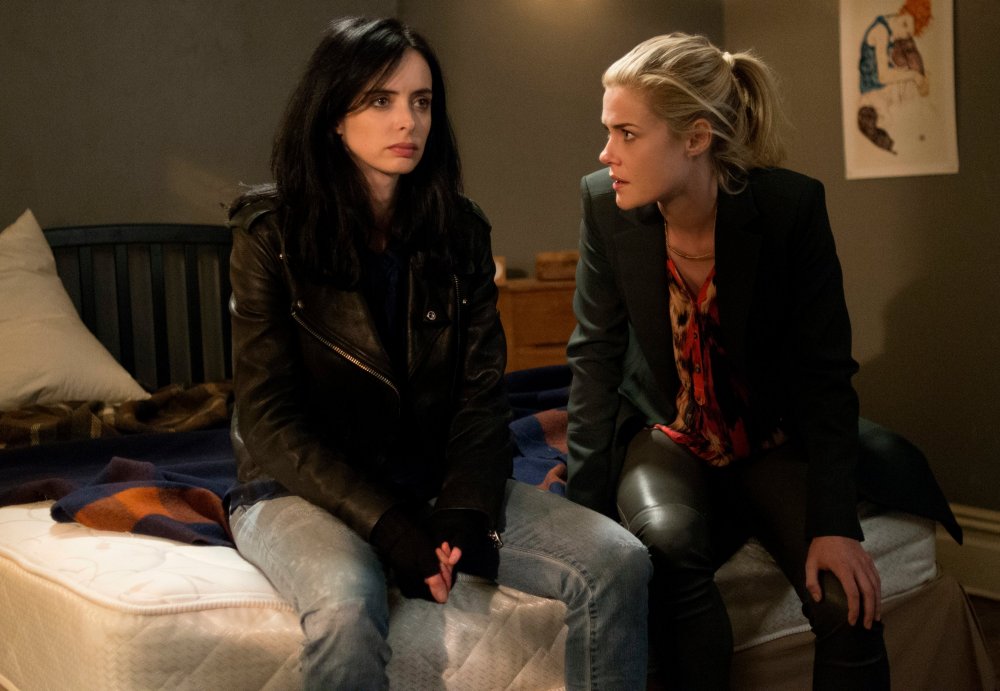 Jessica with her friend and ally Trish Walker

Jones is the antihero we need in the wake of that aforementioned saga, and a rape culture that is pervasive both on screen (Game of Thrones) and off (R Kelly, Bill Cosby, Jian Ghomeshi, James Deen). She is dysfunctional, yes; morally skewed, absolutely; but she’s alive and undefeated, despite the damage she endures – an avenging fury for fellow survivors: “I want you to repeat after me: its not my fault.”

Where season two will lead this our complex, imperfect and thoroughly badass protagonist remains to be seen (there’s a good chance we’ll see deeper into Jones’s origin story, and how she came to her powers). One thing is certain: Jessica Jones has proved a game-changer when it comes to super-heroes, anti-heroes and survivor narratives. The rest of the industry will need to up its game accordingly.

Corrections (14 April 2016): this feature originally referred to Krysten Ritter’s earlier series as ‘Don’t Trust the B**** in Apartment B’, and to her hustling the streets of ‘Devil’s Kitchen’. Both errata have been amended.