Reinventing the rites of cinema under the sign of repression. 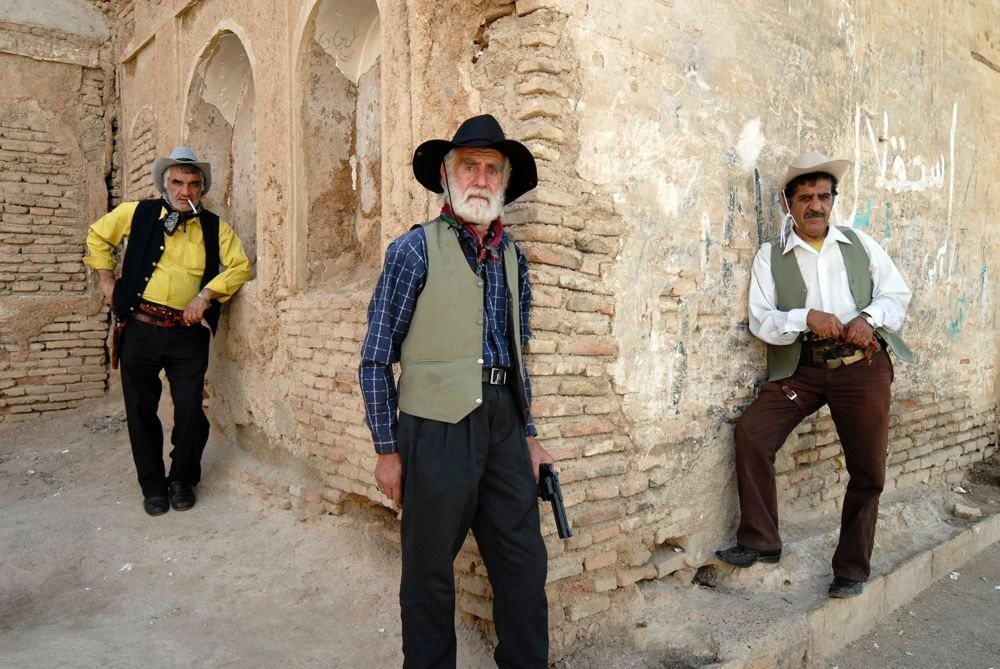 My Name is Negahdar Jamali and I Make Westerns (2012)

The art theorist André Malraux once recalled an outdoor film screening that, for him, had a mythic quality. It took place in Iran in the late 1920s and is briefly described in his essay Esquisse d’une psychologie du cinéma (1940). The film Malraux saw, Charlie’s Life, never existed in conventional terms; it is nowhere to be found in its maker’s back catalogue. Apparently an exhibitor had spliced together Charlie Chaplin’s shorts into a feature-length film and shown the resulting fan-edit to an enthusiastic audience, under the watchful eyes of Persian cats sat on the walls surrounding the venue.

Since that time, Iran has continued to reinvent cinema and its rituals in the most unpredictable ways. This most treasured art form remains the subject of controversial politics, censorship and bans, such that the story of cinephilia in Iran is one of forbidden love. London’s Open City Docs Fest is celebrating the intense passion for film and its possibilities that persists among Iranians, in a series of documentaries that reflect ‘cinemadoosti’ – the Persian word for cinephilia. But how exactly are we to understand cinemadoosti?

It is necessary to consider the impact of Iran’s social history in order to get a better sense of the place of film, and the significance of the love for film where it continues to survive. Iran’s turbulent modern history, in particular the popular revolution in 1979 – when the Islamist Republic government was formed in opposition to the Shah and the Western influences of his regime – has profoundly shaped radical approaches to filmmaking and engagement among viewers domestically and abroad. 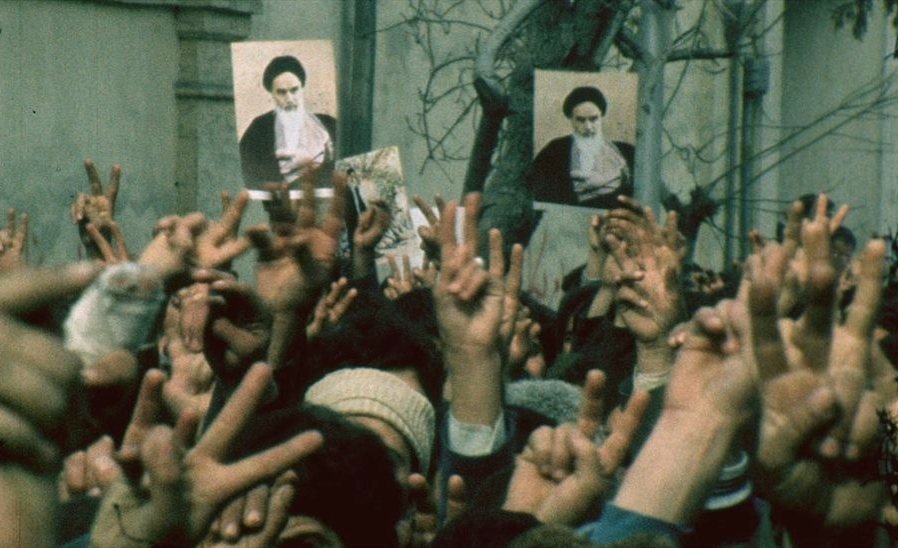 When extremists began burning down cinemas during the revolution, and most film images connected with the West were treated as suspicious, cinephilia inevitably went underground. Cinemadoosti was considered a mode of political and artistic resistance, through cinematic disobedience.

For a short time, previously banned Soviet silents and other leftist political dramas were screened owing to their revolutionary sentiments. But the post-revolutionary government soon drew up guidelines for an accepted Islamic cinema: conformist domestic productions whose banal images made no impact on the imagination, and which were screened at whatever was left of Iran’s cinemas. Home video and later digital TV and satellite were considered equally subversive.

For years, people gathered secretly to watch the classics on worn VHS tapes, and bootleg copies of more recent films. Erasing vital, colourful and riotous images from individual memory wasn’t an easy task, especially in a country that in the 1960s had embraced Jerry Lewis. What helped to keep Iranian film culture alive in the first 15 years after the revolution, until the time that more doors were opened, was an oral tradition – talking about cinema. 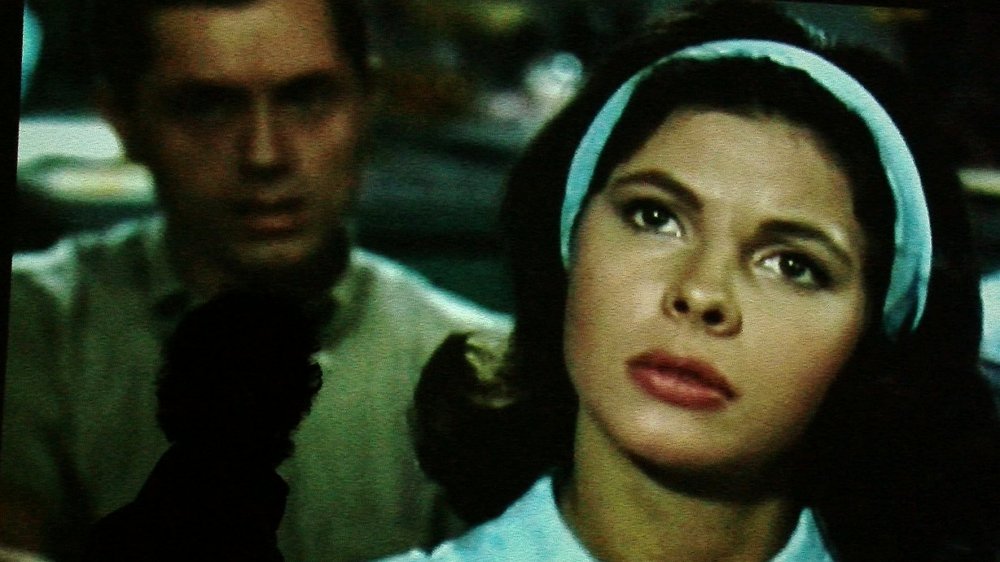 For the generation born after the revolution, myself included, parents became narrators of the films we couldn’t see. My first encounter with classics such as The Godfather, La Strada or Shree 420 was hearing their narratives as told by my father. Years later, when thanks to new technologies we could see the films themselves, the real sequences were sometimes less impressive than those we had created in our mind. The imagination could be more cinematic than cinema.

If cinema was invented in France, and industrialised on a massive scale in the US, it was in Iran that it was turned into a folkloric art. Iranians have subverted received notions of cinephilia to create their own cinemadoosti, which deals with memory, text and images, and through which the memory of an image is often substituted for the image itself.

Iranian documentary cinema continues to map the conditions and changes experienced by its artists, exploring the relationships between the film image, personal experience and social concerns. The genesis of the cinemadoosti documentary can be traced back to Abbas Kiarostami’s Close-up (1989), a sharp, incredibly moving account of Hossain Sabzian, a man at the bottom of the social pyramid who is bewitched by the films of Mohsen Makhmalbaf, to the extent that he poses as the director. 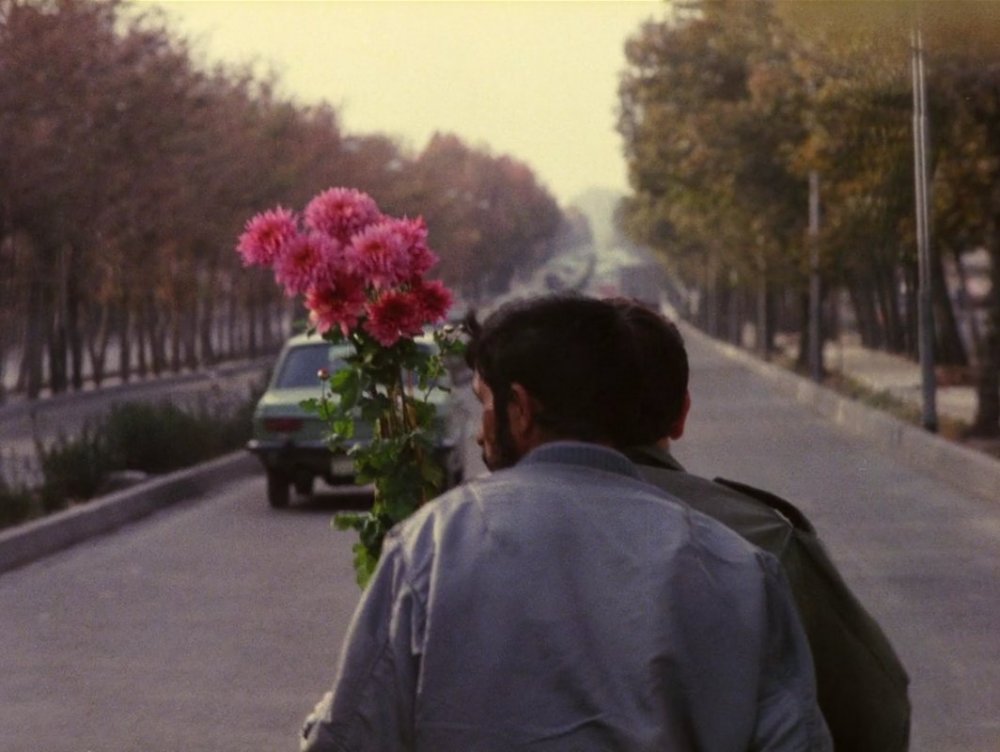 Sabzian is a father figure of sorts to the cinephiles we meet in My Name is Negahdar Jamali and I Make Westerns (Man Negahdar Jamali, western misazam) and Trucker and the Fox (Ranande va roobah). Some of Iran’s cinemadoosti documentarists tell their stories from outside of Iran, which brings the added consideration of geographical displacement into their narratives, as seen in Jerry & Me and My Stolen Revolution. All four of these recent films will be shown as part of the Open City Docs Fest.

The influence of Jerry Lewis over the life of diaspora filmmaker and teacher Mehrnaz Saeed-Vafa is expressed in her remarkable autobiographical work Jerry & Me. Lewis’s films become the means by which Saeed-Vafa is able to tell her life story. As a young girl she experienced the tumult of the infamous CIA-MI6 backed coup of 1953, and later lived through the period of ‘modernising’ Iran under the Shah. Then came the revolution.

Film critic Adrian Martin calls the film an example of “fan psychoanalysis” and defines it as “a type of self-analysis, arrived at through (to use the classic psychoanalytic couplet) the introjection of, and projection onto, a beloved object: in this case, the performances, films, image and career of Jerry Lewis.” 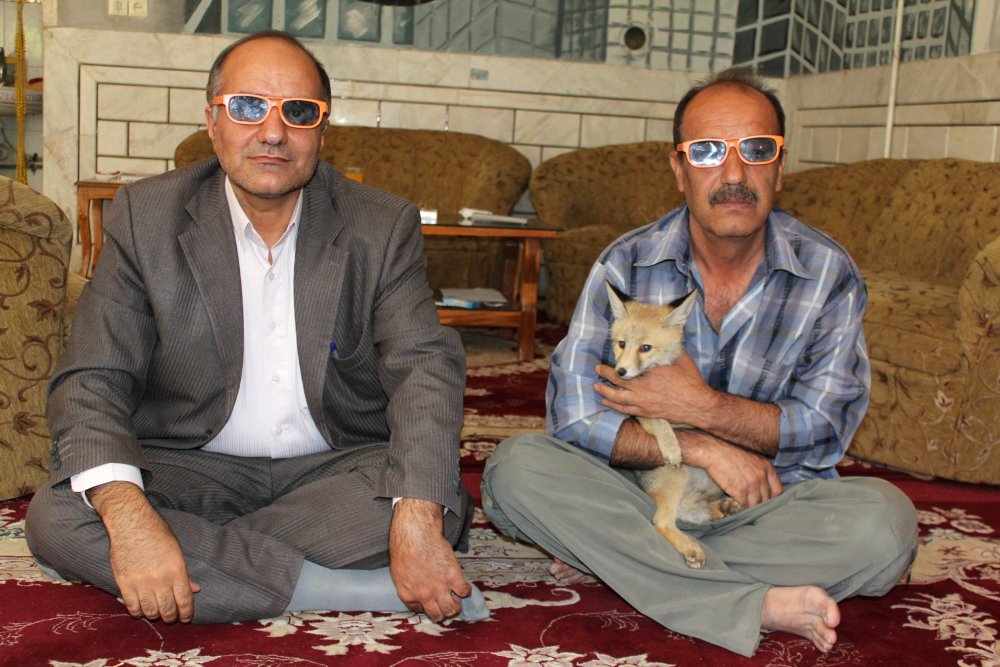 Psychoanalysis and cinema are also intertwined in Trucker and the Fox. In this case it is the hobbyist films made by the film’s main character, Mahmoud Kian Flaverjani, that are the focus. A manic-depressive truck driver in love with animals and cinema, Flaverjani’s obsession with his pets (which include a fox) leads him to cast them in ultra-low-budget versions of David Attenborough’s Planet Earth.

Trucker is a film about daydreaming and the high price one pays for it; the story of a marginalised and estranged person whose passion for cinema literally becomes his raison d’être – a story that is common among a number of recent Iranian documentaries. One feels that Flaverjani becomes the subject of director Arash Lahooti’s fascination partly due to the fact that the professional filmmaker shares the endeavours and failures of his amateur counterpart.

The shifting mood of the film, moving from hopelessness to hope and backward to despair, is also reflected in a recent interview with Lahooti, who says: “I have received awards for two consecutive years from the Cinema Vérité festival [in Tehran]; still, my projects are abandoned to an uncertain fate… If these conditions are to continue, no future could be imagined for documentary filmmakers.” 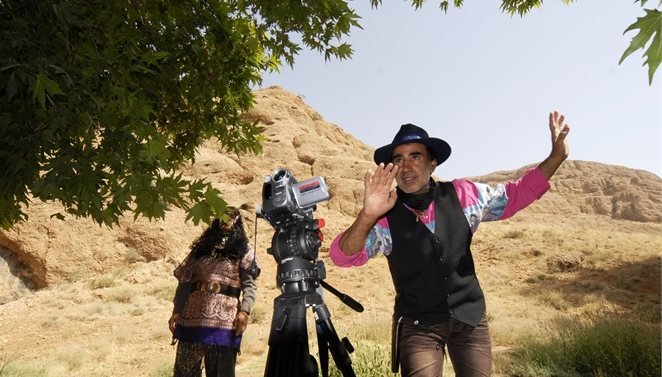 My Name is Negahdar Jamali and I Make Westerns (2012)

Kamran Heydari, the director of My Name Is Negahdar Jamali and I Make Westerns, shares the same doubts. The subject of his film is a master of no-budget westerns set on the plains around Shiraz, Iran. Negahdar revives his desired cinema at any price, even accepting the break-up of his family in the process. His closest equivalent in the West, in terms of economics and fervour, might be Jack Smith. Again, the line between cinema and life is hilariously blurred and it becomes difficult to confirm whether the visual style of the ‘western’ scenes in the film is entirely Negahdar’s, or the result of Heydari’s treatment of the western genre via Negahdar.

In the case of My Stolen Revolution Nahid Persson Sarvestani is both the filmmaker and the subject. Sarvestani goes in search of her leftist cellmates who survived the brutal conditions of a post-revolutionary prison and fled to the West. Despite its urgent subject matter, Sarvestani foregrounds the tragic and melodramatic aspects of the material and in doing so the self-reflexive interest in the medium of cinema becomes much less pronounced. 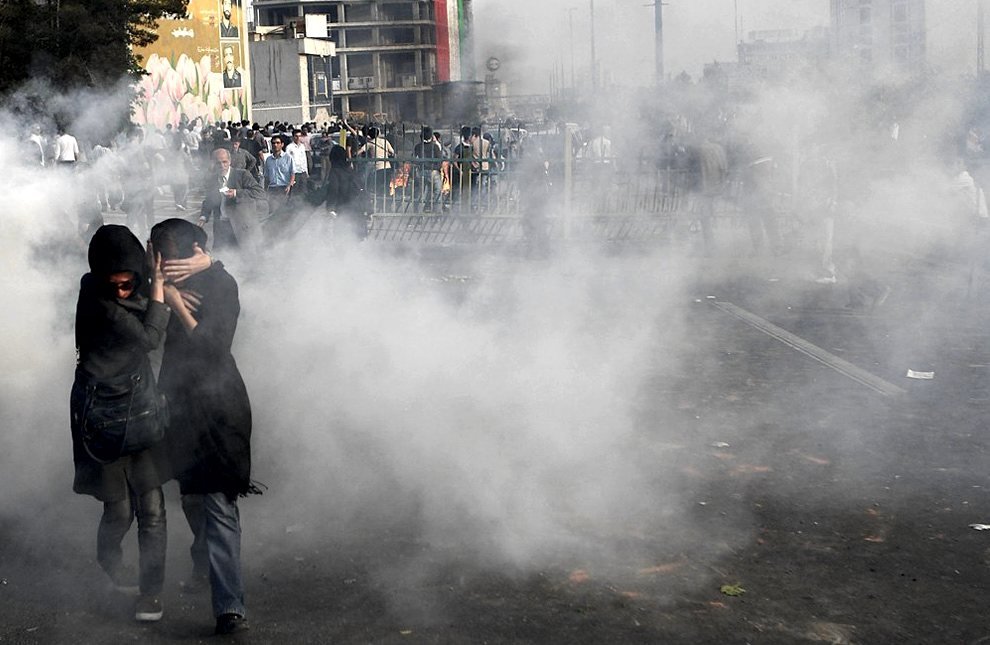 It is somewhat unique to Iran that many of the works produced by its filmmakers lead us to considerations of cinema itself, quoting films in various contexts, while at the same time commenting on recent history. Beyond the festival, there are other notable cinemadoosti titles from the last two years, such as Seyed Reza Razavi’s Seconds of Lead and Profession: Documentarist, a portmanteau of seven autobiographical shorts by Iranian women which recently screened at Sheffield Doc/Fest.

Seconds of Lead begins by recounting the Black Friday massacre in Tehran’s Jaleh Square, but then restructures itself as a film about a projectionist, who worked at a nearby cinema, who hasn’t yet recovered from the trauma of that day and the lives he could not save. The trauma is felt not only by this projectionist; it is the trauma of cinemadoosti.

These films offer challenging takes on the death of celluloid filmmaking, too: on the end of projected films in glamorous theatres and the increasingly unclear demarcations between filmmaker, critic and spectator. In Trucker, truck drivers gather in the middle of nowhere and watch Flaverjani’s films, projected onto a screen hanging over the side of a petrol tanker. Afterwards they discuss the film as if they are in a cinematheque. This extraordinary sequence seems to update Malraux’s dreamlike image of cinephilia in Iran, where the passion for film is still felt by many, still capable of fostering criticism and taking cinema in adventurous new directions.