Plus Steven Spielberg in Cold War Berlin, Danny Boyle’s backstage Steve Jobs biopic, transgender street life with Tangerine and a new essay by Molly Haskell on the history of the romcom.

In print and digital from 30 October. Log in / sign up or or buy a print copy now. 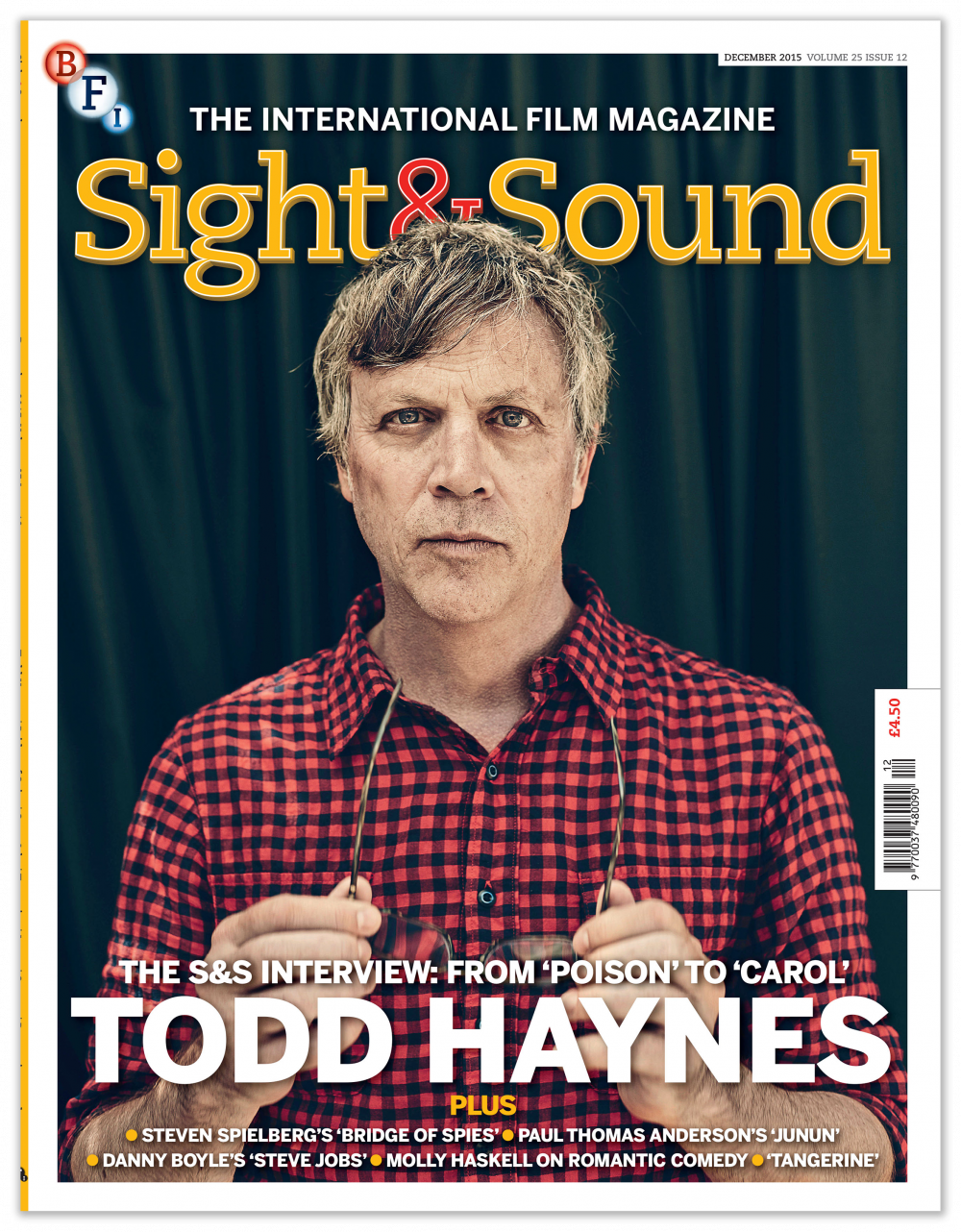 Our December issue is fronted by US indie hero Todd Haynes, who revisits 1950s repression and romance in his new film Carol, a love story between Cate Blanchett’s married mother and socialite and Rooney Mara’s New York department-store assistant.

Cross-examined by Ryan Gilbey for this month’s Sight & Sound interview, the Portland-based Haynes looks back over 30 years of making period dramas (Superstar, Velvet Goldmine, Far from Heaven, I’m Not There, Mildred Pierce), expanding on subjects such as queer filmmaking, shooting Carol on Super 16 film, working for the first time with a script he hasn’t written himself, why spanking scenes litter his films and what it feels like to be part of cinema’s canon.

Patricia Highsmith’s novel Carol has waited over 60 years to be adapted for the cinema while so many other of her books and characters, not least the enigmatic Ripley, have proved so attractive to filmmakers. Philip Kemp appraises the gamut, from Alfred Hitchcock’s Strangers on the Train to Jamie Thraves’s The Cry of the Owl, while also reflecting on Highsmith’s own appraisals of many of these movies.

A period spy tale by another American filmmaker obsessed with the past – Steven Spielberg – is another focus of our roster of features this month. The Cold War prisoner-swap drama Bridge of Spies reunites Spielberg with Tom Hanks and sees the director, after films like Saving Private Ryan and Schlinder’s List, again confront the question of the worth of one human life. Nick Pinkerton investigates this visually expressionistic spy drama steeped in the screen history of the Cold War.

With Steve Jobs, Danny Boyle takes on his first biopic but evades the genre’s habitual pitfalls with Aaron Sorkin’s three-act script, a walk-and-talk ensemble drama that zeros in on key moments in the tech innovator’s life. David Gritten talks to both Boyle and Sorkin about the project’s long gestation and working with Michael Fassbender and Kate Winslet.

At the other end of the financial spectrum is Sean Baker’s breakout low-budget indie Tangerine, about a night on the streets of Los Angeles with two transgender sex workers, so imaginatively made that it never betrays that it was shot on an iPhone. Talking to Edward Lawrenson, Baker discusses evolving his film from a four-letter pitch, as well as detailing how he gained the trust of transgender sex workers to work with him to develop his story. Overleaf, Sophie Mayer mulls the history of trans representation on screen and finds mainstream cinema currently lagging far behind television and independent film.

On the occasion of the BFI’s blockbuster Love season, Molly Haskell traces the roots of Hollywood movie courtship back to Ancient Greece and examines the crucial role that hate and animosity play in every love affair, from the battles between Claudette Colbert and Clark Gable in Capra’s It Happened One Night to those of Amy Schumer and Bill Hader in Apatow’s Trainwreck.

Elsewhere in the issue, we explore Paul Thomas Anderson’s latest venture, the VOD music documentary Junun, Hannah McGill picks the wheelchair as her cinematic object this month and Tony Rayns selects the highlights of the London Korean Film Festival.

Our Reviews section presents in-depth reviews of every new theatrical release, from SPECTRE and Brooklyn to Gaspar Noé’s ‘Love’, while our Home Cinema section salutes magnificent restorations of two films by Ousmane Sembène, the father of African cinema, and a collection of Patricio Guzmán’s documentaries. Our Books pages delve into the treasure chest of images that is the Charlie Chaplin Archives, a new study of David Lean and Nicolas Winding Refn’s collection of pulp posters.

And we say farewell with our regular Endings column, in which Alex Davidson unpicks the vengeful climax of William Wyler’s The Heiress. 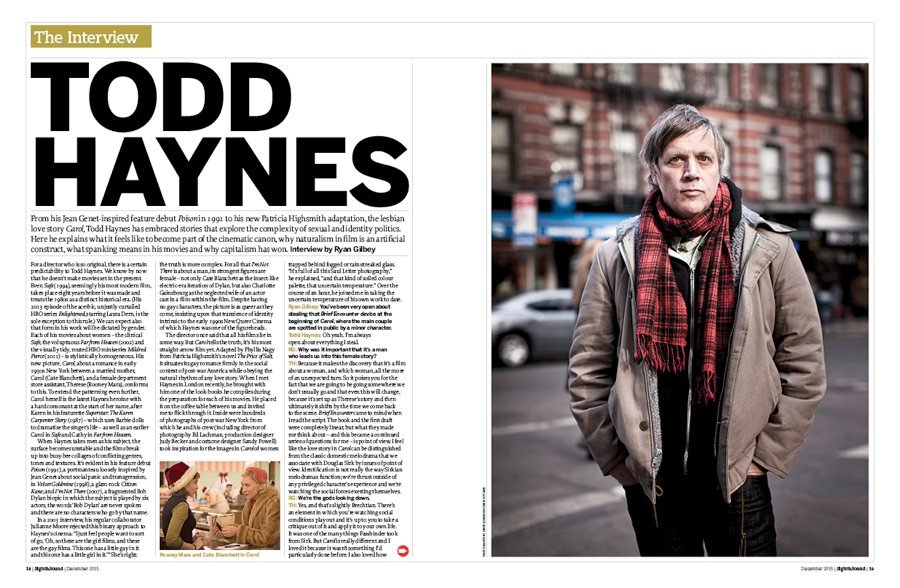 From his Jean Genet-inspired feature debut Poison in 1991 to his new Patricia Highsmith adaptation, the lesbian love story Carol, Todd Haynes has embraced stories that explore the complexity of sexual and identity politics. Here he explains what it feels like to become part of the cinematic canon, why naturalism in film is an artificial construct, what spanking means in his movies and why capitalism has won. Interview by Ryan Gilbey.

+ Patricia Highsmith: the poet of appreciation

From the outset, the detached, clinical insights offered in Patricia Highsmith’s unsettling novels have proved attractive to filmmakers. By Philip Kemp. 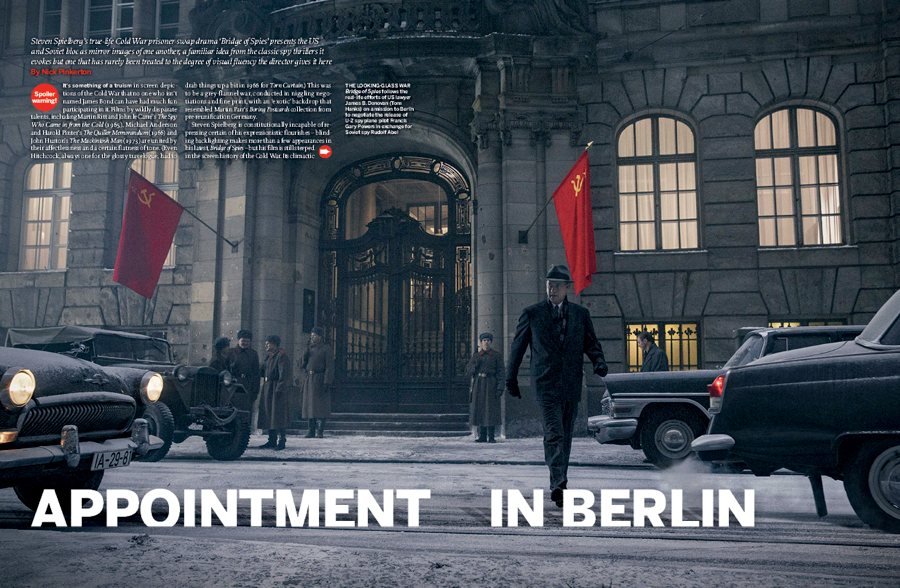 Steven Spielberg’s true-life Cold War prisoner-swap drama Bridge of Spies presents the US and Soviet bloc as mirror images of one another, a familiar idea from the classic spy thrillers it evokes but one that has rarely been treated to the degree of visual fluency the director gives it here. By Nick Pinkerton. 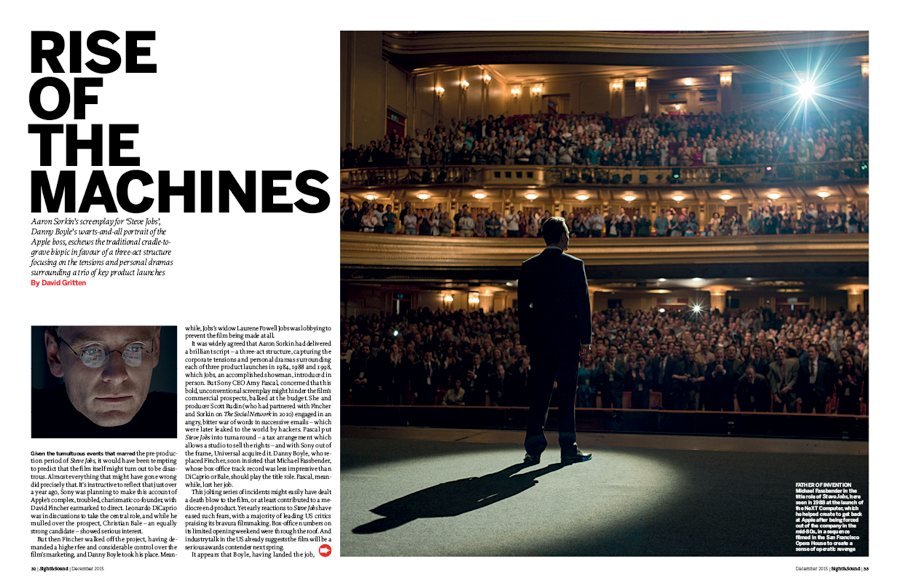 Rise of the Machines

Aaron Sorkin’s screenplay for Steve Jobs, Danny Boyle’s warts-and-all portrait of the Apple boss, eschews the traditional cradle-to-grave biopic in favour of a three-act structure focusing on the tensions and personal dramas surrounding a trio of key product launches. By David Gritten. 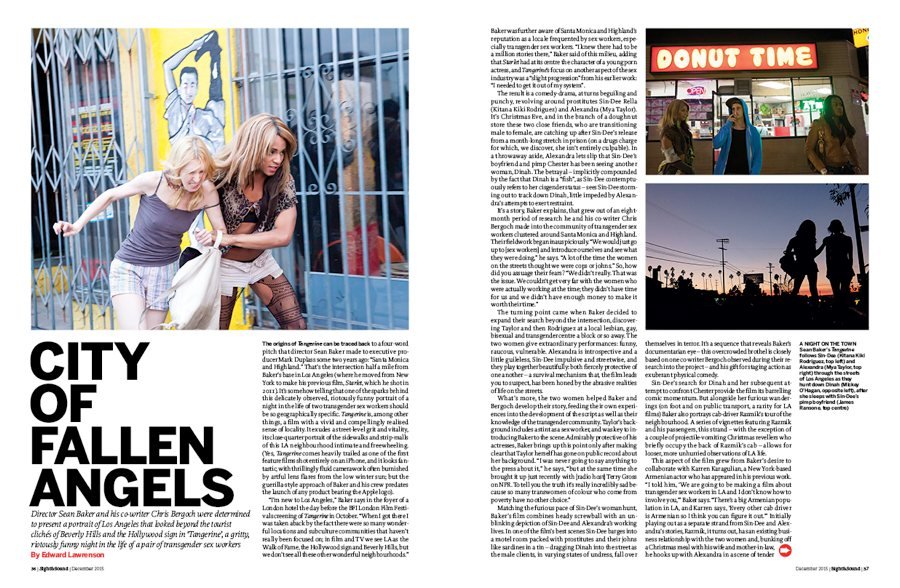 Director Sean Baker and his co-writer Chris Bergoch were determined to present a portrait of Los Angeles that looked beyond the tourist clichés of Beverly Hills and the Hollywood sign in Tangerine, a gritty, riotously funny night in the life of a pair of transgender sex workers. By Edward Lawrenson.

+ A moment of transition

In terms of trans representation on the screen and behind the camera, it’s popular television that’s driving the real change while mainstream cinema is struggling to catch up. By Sophie Mayer. 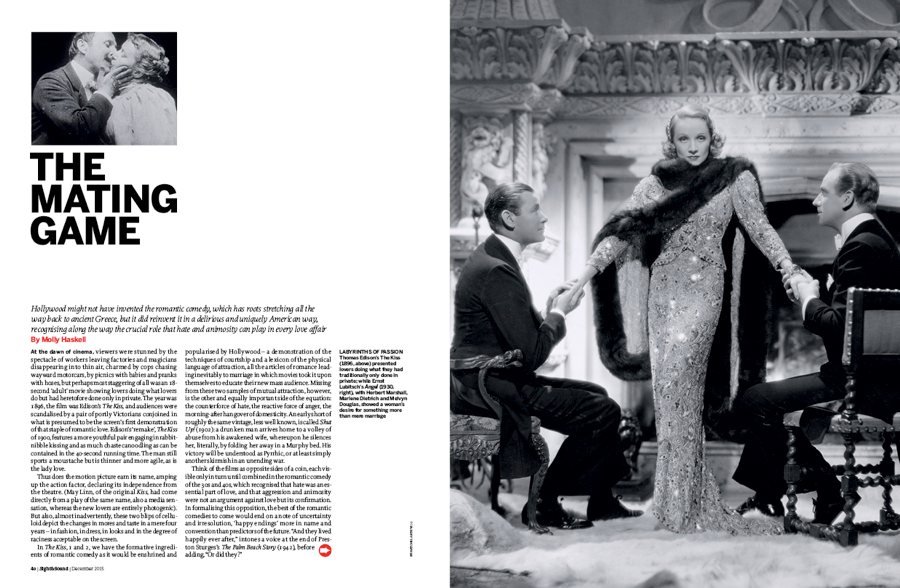 Hollywood might not have invented the romantic comedy, which has roots stretching all the way back to ancient Greece, but it did reinvent it in a delirious and uniquely American way, recognising along the way the crucial role that hate and animosity can play in every love affair. By Molly Haskell.

Celebratory endings (and our forthcoming 2015 poll)

In the frame: A blow against the darkness

South Korea’s democracy may be seizing up, but the London Korean Film Festival shows that its film culture is as dynamic as ever. By Tony Rayns.

The presence of a wheelchair in a movie without some attendant indication of misery or misfortune is a troublingly rare sight indeed. By Hannah McGill.

Marry the intimate to the spectacular, the swoon of a kiss to the swirl of battle, and box-office action is almost guaranteed. By Kate Stables.

Online: A passage to India

Paul Thomas Anderson’s Junun is a gentle, modest record of a musical collaboration – and part of a big change in the way we watch film. By Sam Davies.

Films have always excelled at making us happy, providing a kinetic rush that takes us out of our selves and allows us to soar. By Mark Cousins. 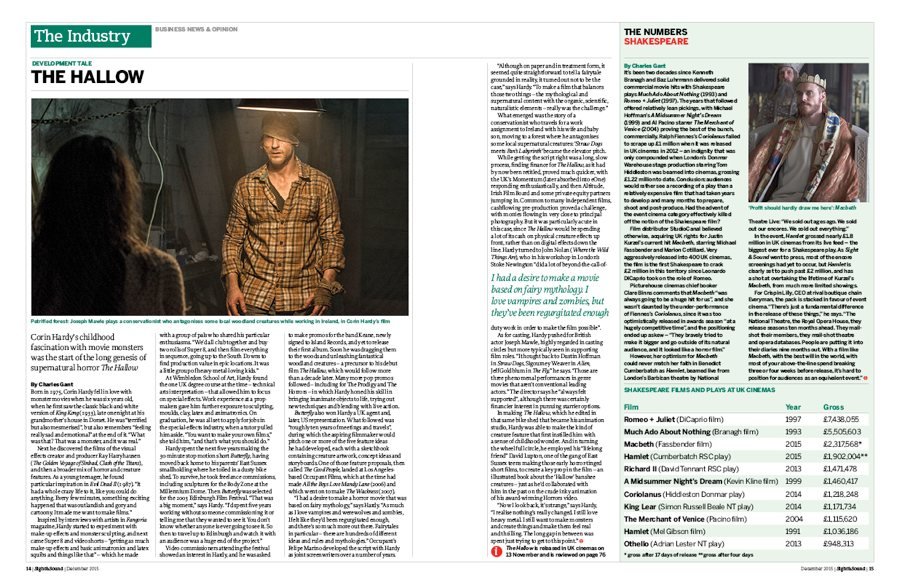 Corin Hardy’s childhood fascination with movie monsters was the start of the long genesis of supernatural horror The Hallow. By Charles Gant.

Shakespeare films and plays at the UK box office, by Charles Gant.

The quality that comes with shooting on film is undeniable, but for all the celluloid evangelism, digital is still a saviour for many. By Ben Roberts.

Profile: Left to his own devices

Ornery, confrontational and a stranger to slickness, Travis Wilkerson may be the political conscience of American cinema. By Neil Young.

For a decade, the label Ghost Box has been conjuring the phantoms of British horror film. Has the haunting gone on long enough? By Daniel Barrow.

David Robinson ended his stint as director of the Pordenone silent film festival with a bang. By Brian Robinson. 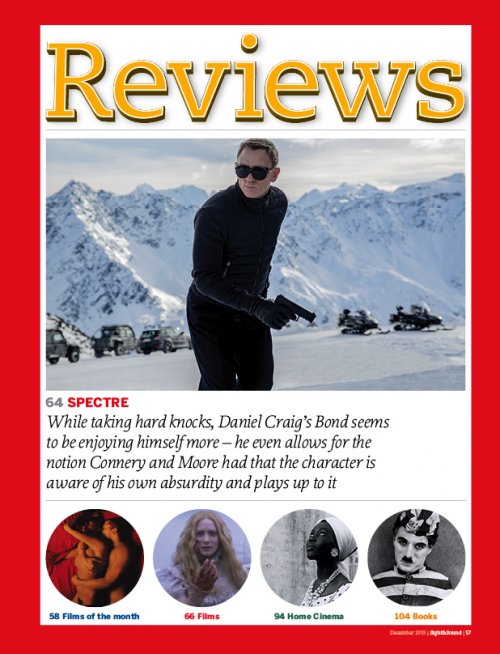 Between Two Worlds
Black Mass
Brand: A Second Coming
Bridge of Spies
Carol
Closer to the Moon
Crimson Peak
Do I Sound Gay?
Dressed as a Girl
The Dressmaker
The Fear of 13
Güeros
The Hallow
Hand Gestures
He Named Me Malala
Hotel Transylvania 2
Kill Your Friends
The Lady in the Van
Momentum
My Nazi Legacy
My Skinny Sister
Palio
Pan
Paper Planes
The Perfect Guy
Premature
Radiator
Regression
Revenge of The Mekons
Solace
Star Men
Steve Jobs
Steve McQueen: The Man & Le Mans
Tangerine
Tell Spring Not to Come This Year
Unbranded
Under Milk Wood
The Walk
Warriors 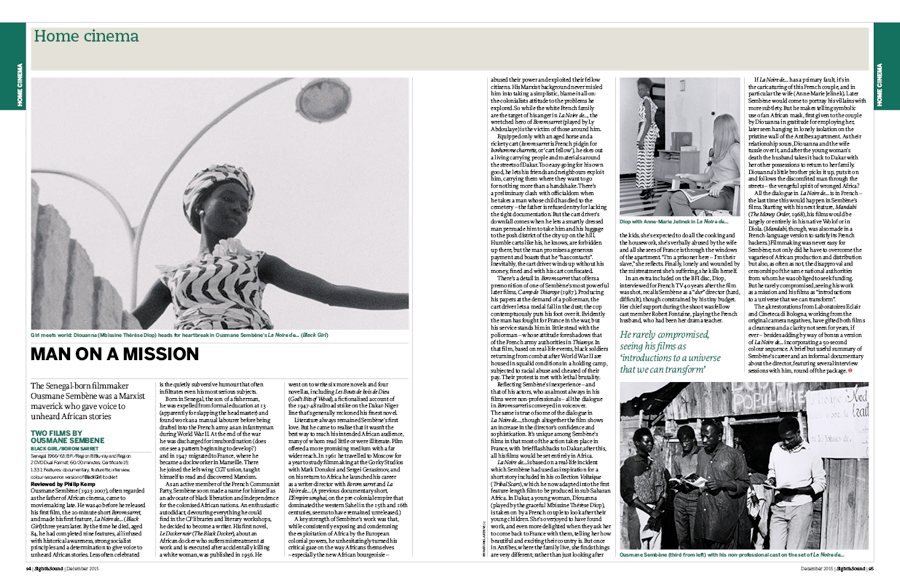 Man on a mission: Two Films by Ousmane Sembene

The Senegal-born filmmaker Ousmane Sembène was a Marxist maverick who gave voice to unheard African stories. By Philip Kemp.

The past master: Five films by Patricio Guzmán

Swept up in the events of 1973, Patricio Guzmán has been sifting indefatigably through Chile’s history ever since. By Nick Pinkerton.

Lost and found: A Brother and His Younger Sister

Even a foggy online viewing reveals Shimazu Yasujirô’s family drama to be a classic of 1930s cinema, fully the equal of Ozu. By Brad Stevens. 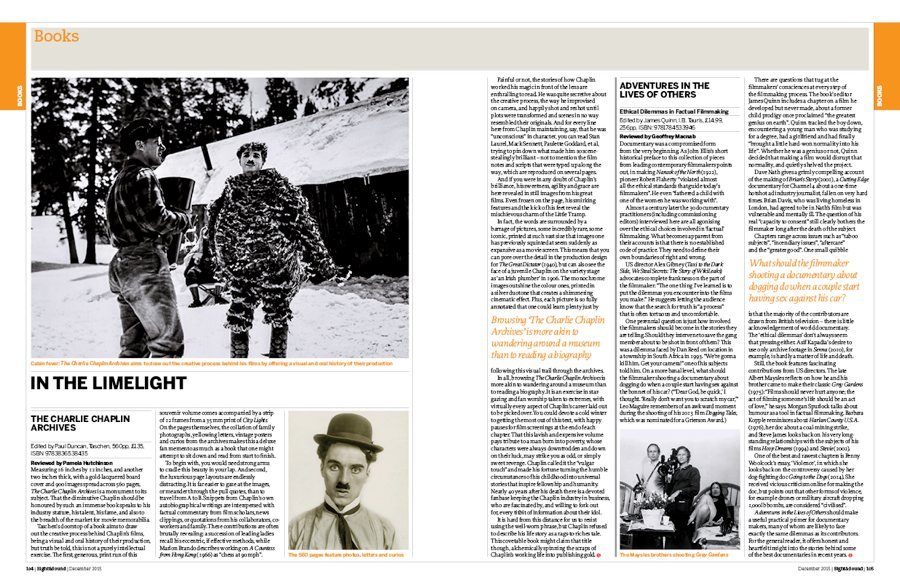 Adventures in the Lives of Others: Ethical Dilemmas in Factual Filmmaking Edited by James Quinn (I.B. Tauris) reviewed by Geoffrey Macnab

The Female Gaze: so many overlooked films we overlooked
Mission: Impossible – Rogue Nation That Knew Too Much
Trans transformations
One key female solo survival drama 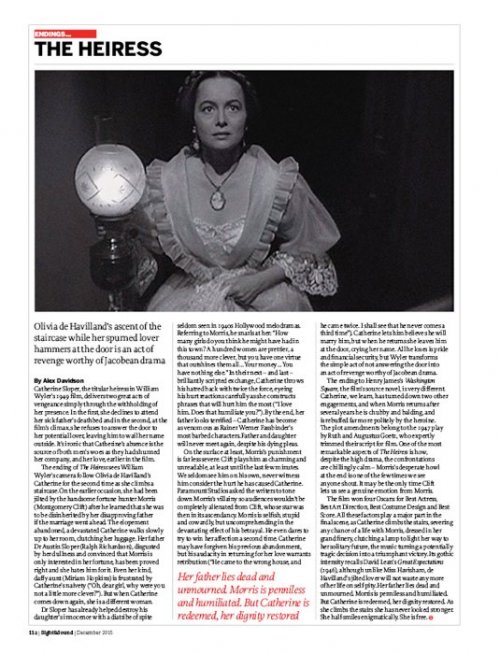 Olivia de Havilland’s ascent of the staircase while her spurned lover hammers at the door is an act of revenge worthy of Jacobean drama. By Alex Davidson.