From Rajasthan to your router: “a very unusual coming together”, with Jonny Greenwood, Shye Ben Tzur and an Indian qawwali ensemble. 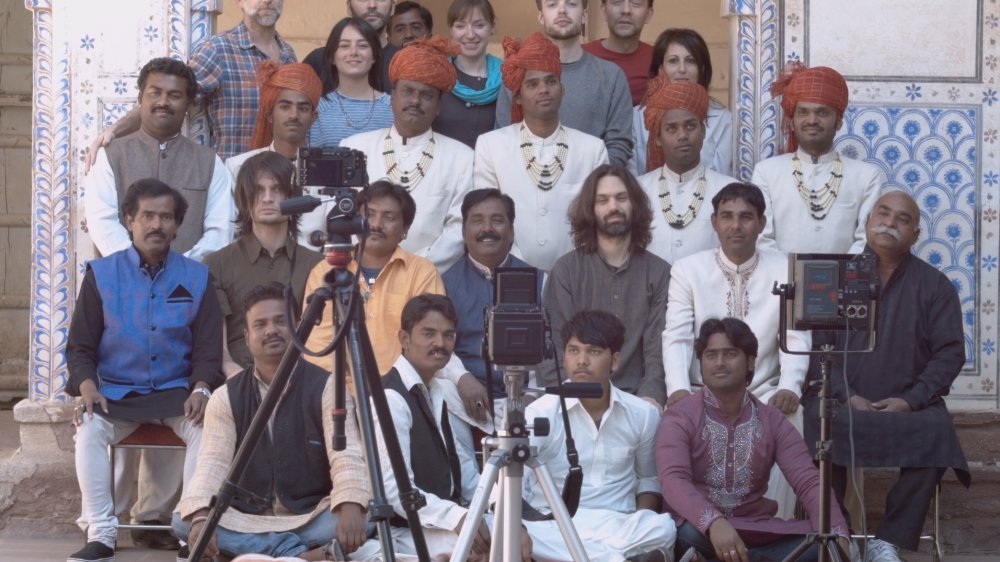 ‘A very unusual coming together’: the cast of Junun

Anyone who has ever spent time recording music or film knows that an alarming percentage of the time seems to consist of waiting: for engineers, for the light, for microphone setups, for tuning. Junun, the new film by Paul Thomas Anderson which made a simultaneous debut on 8 October at the New York Film Festival and through online streaming service MUBI, starts with a wait of its own. A group of musicians are sat cross-legged in a circle, instruments in their laps, listening patiently as the afternoon call to prayer from a nearby mosque drifts in through the windows. When it finishes, they begin.

The players are Shye Ben Tzur, an Israeli composer, singer and guitarist, the Rajasthan Express, an Indian qawwali group, and, most recognisable to Western audiences, Jonny Greenwood, guitarist in Radiohead. The ‘studio’ is the immense fifteenth-century fort of Mehrangarh, standing on the heights over Jodhphur, Rajasthan. Led by Ben Tzur, the music is a fascinating mixture of textures, melodies and rhythms: Ben Tzur sings long, extended melody lines (often in Hebrew), while the qawwali ensemble adds harmonium, group backing vocals and the percussive power of the dohlak and nagara. A brass section contributes, and so do two female vocalists, Afshana Khan and Razia Sultan (qawwali is traditionally a male preserve). Greenwood plays guitar, bass and ondes martenot, and the result is a beguiling mixture of the devotional, the raucous punch of a marching band and the slow-build intensity of classic qawwali.

Other lulls in Junun are enforced by India’s patchy power grid. Anderson, off-camera, asks nagara player Nathu Lal Solanki, flat on his back, what’s going on. “India has failed. Like we always say, everything is possible in India: ‘No toilet, no shower, but full power, 24-hour,’” Solanki responds. “Today is no power.” 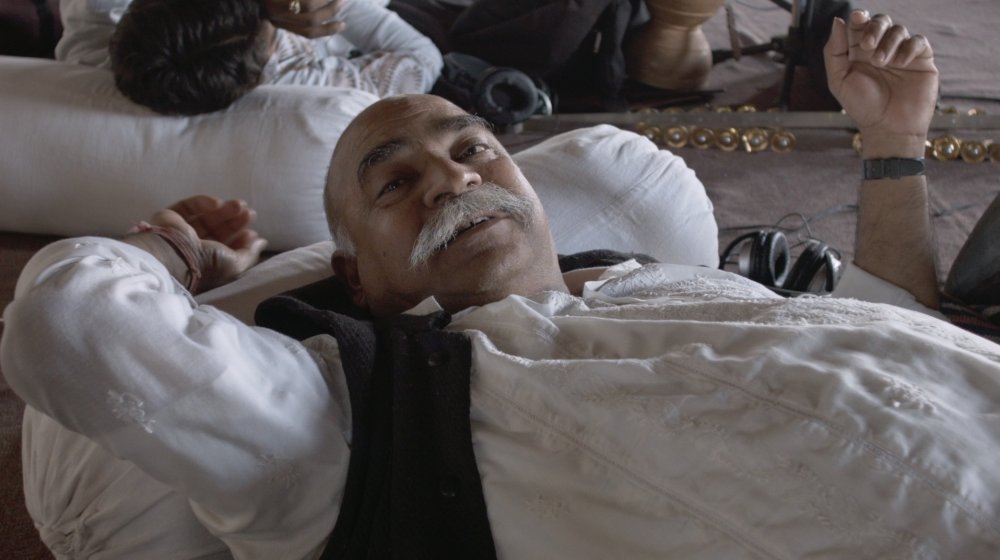 Technical troubles intervene: a dinky Casio SA-46 keyboard needs batteries, a harmonium (a central instrument to the qawwali tradition) needs tuning. These errands are run in downtown Jodhpur, a lo-fi drum machine pulsating under night shots of moped-packed streets, which could almost be outtakes from another Quadrophenia remake. And at one point Greenwood has to chase the group into action before a battery expires and stops all work for the evening.

Yet Junun generally has the relaxed playfulness of a working holiday: Anderson is on the job, yet clearly free of the suffocating care and attention to detail required to produce weighty pieces like The Master (2012) or Inherent Vice (2014). There are numerous small informal touches. Focus or depth of field are corrected mid-shot. Filming the musicians from a hallway with an obstructed view, Anderson simply picks up the tripod – the image pitching and yawing accordingly – and plonks it down closer. And then does it again.

One thing Junun refuses to do is explain itself: there is a bare minimum of captions identifying places, dates, names, but no interviews with either Shye Ben Tzur or Jonny Greenwood. Greenwood’s presence is so low-key you almost have to check that he’s co-credited on the album. Rarely centre-shot, he instead can be spotted in corners of rooms and frames, hunched over a bass or laptop, face obscured by his hair. 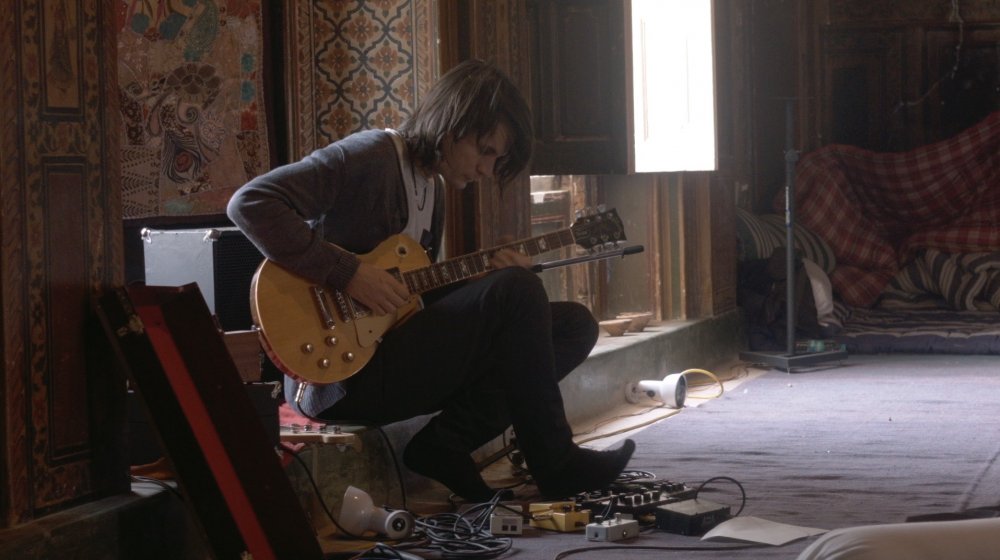 No one explains the genesis of the project, or indeed what the project is. Anderson is essentially a Frederick Wiseman fly on the wall. Or rather a bird – one subplot in the film concerns a dove which likes to sit in on proceedings, perched on a hanging used to baffle ceiling reverb. Though he is chased out with the pointy end of a microphone stand, at other moments Anderson’s camera takes a bird’s-eye view itself of the exteriors and backdrops, using a remote-controlled drone to capture stunning slow-rising shots of Jodhphur’s sprawling roofscape and the valley over which lies Mehrangarh fort. At other times the camera becomes hypnotised by the ensemble aerial geometry of the birds that wheel around the fortress’s roof and the heights of the city. One fantastic shot – the first bird’s-eye-view of some birds since The Birds? – has the camera descend slowly from above the birds’ interlocking arcs as they circle the scraps of meat flung into the air by a local on a battlement’s top.

But these touches aside, Junun’s focus is zeroed in on the music. In its insistence on this bare-bones approach – no idle chatter, just performance – Anderson’s film recalls From the Basement, a TV series put together by Nigel Godrich, the music producer glimpsed occasionally in Junun overseeing the recording process. From the Basement’s approach to putting music on television was strictly no-frills: a band performing live to a barely visible handful of people in a subterranean London studio. It was closer to a filmed version of a John Peel Session than the in-the-round hoopla of Later… with Jools Holland (though Junun’s slow circular opening pan around the musicians is distinctly reminiscent of that very show’s ritual opening). Like a Peel session, or From the Basement, Junun treats each piece with the respect it’s due: takes are shown from start to finish, and their closing cadences allowed to hang for a moment in the air.

Anderson’s approach is to document rather than interrogate, but questions proliferate. How did Jonny Greenwood get involved? How have Ben Tzur and Greenwood recruited this particular selection of musicians? How has Anderson ended up there? Is it a favour returned by the director to Greenwood – who scored There Will Be Blood, The Master and Inherent Vice – or is there a more substantial personal interest? 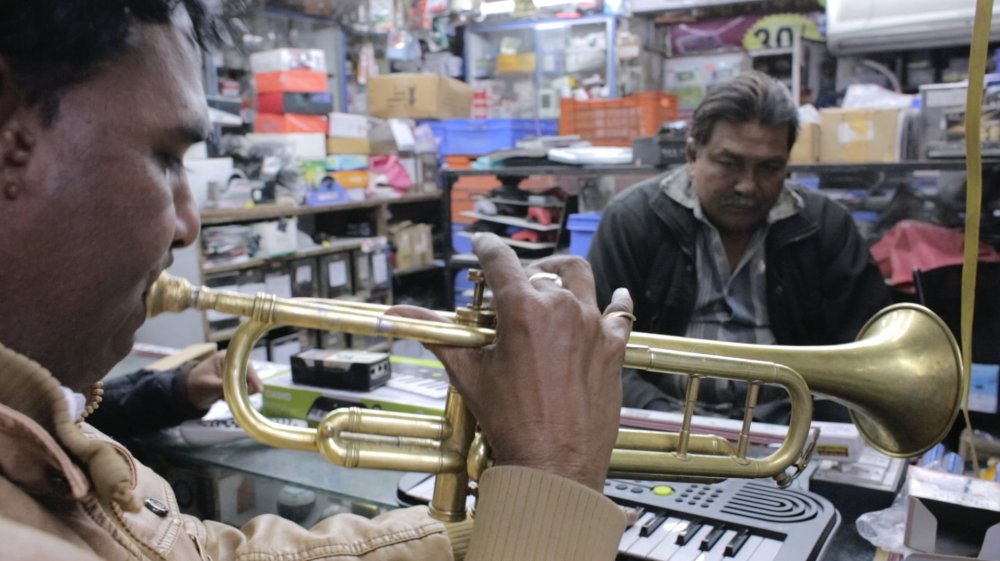 Junun’s silence about itself is double-edged. It has an openness and humility – a determination to let the music speak for itself, without distracting frameworks. Yet it’s also a touch defensive, a way perhaps to prevent anything too inadvertently pompous or foot-in-mouth.

The history of Western pop musicians collaborating with their peers from the developing world is long, and not always distinguished. The Rolling Stones’ Brian Jones secured a recording contract for the Master Musicians of Joujouka after a trip through Morocco’s Atlas Mountains – although George Harrison’s interest in Indian music, and eventual friendship with Ravi Shankar, is probably the best known example from the 1960s. More recently Damon Albarn of Blur recorded two albums with musicians from Mali.

Paul Simon’s Graceland project defied an artistic boycott of apartheid South African to incorporate the music and musicianship of the townships, but there is still real critical ambivalence over the album: how does collaboration across such gaps avoid becoming co-option, or appropriation? In the case of sampling culture, rhythms from Indian musical traditions filtered into American hip hop and R&B around the millennium through producers like Just Blaze, DJ Quik and Timbaland. Quik’s So Addictive, sampling Indian singer Lata Mageshkar, saw his record label sued for $500m. At the time of writing Jay Z and producer Timbaland are standing trial for copyright infringement after sampling Egyptian love ballad Khosara Khosara for their 2000 track Big Pimpin.

“A very unusual coming together” is the description of the gentleman who introduces Ben Tzur, Greenwood and co at an unscheduled appearance at a Jodhpur festival. With no explanation of how or why an Israeli composer, Shye Ben Tzur, become so involved in qawwali, a musical tradition that comes from Sufi mysticism, the music is left to speak for itself. The closest Junun comes to expressing any view on these vexed issues comes obliquely, from a musician of the Manganiyar caste, who comments: “I believe all kinds of gods, like Muslim god, Hindu gods, all kind of gods… I can play in a mosque, in a holy tomb and also a Sufi shrine. All traditions we are…” 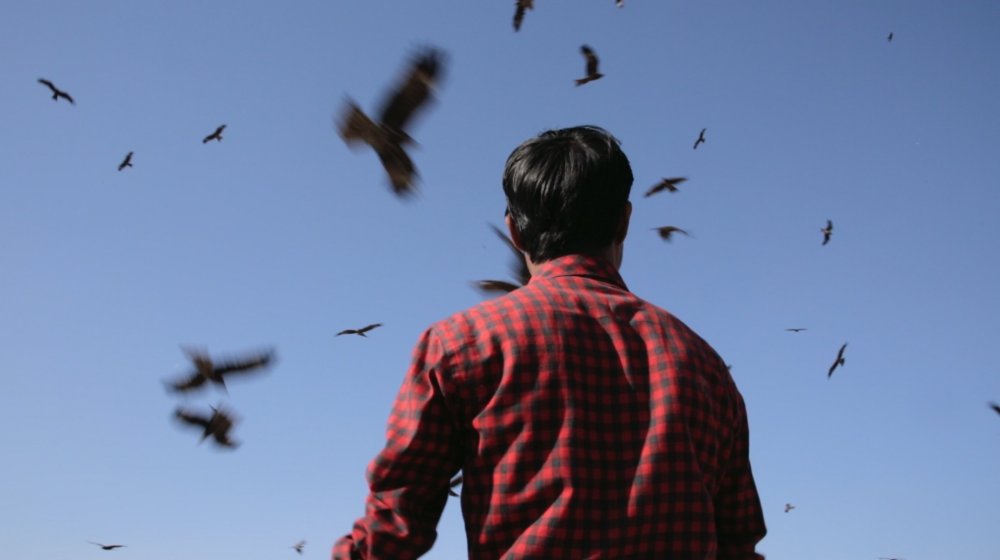 Junun made a simultaneous debut at the New York Film Festival and online on 9 October, through streaming service MUBI – short-circuiting completely the typical release hierarchy by which a film will move from festival to cinema, DVD to digital. MUBI’s model is to provide a slate of 30 films to subscribers, one expiring and one being added to the list each day, with the selection leaning heavily towards world cinema, arthouse, silent and the unfairly overlooked. Whereas normally the schedule of upcoming films is hidden – and part of the pleasure of the service is the daily micro-gift of seeing what’s been added – Junun’s premiere was announced well in advance. Partly this can be put down simply to the cachet of securing a new and exclusive Paul Thomas Anderson production.

But it’s also part of a wider trend. MUBI was the only way for UK viewers to catch From What Is Before, Lav Diaz’s follow-up to 2013’s Norte, the End of History, when it was available to stream earlier this year, and that film makes an instructive pairing with Junun. The argument has often been made that streaming, in the shape of MUBI or more commercially-minded competitors like Netflix, will change the bar of entry for film release, allowing stranger shapes to fit through the door, and recent developments are beginning to bear that out. Whether an hour-long documentary like Junun, a slow-flowing six-hour epic like From What Is Before or a film like Gust Van Den Berghe’s Lucifer, shot with a circular rather than rectilinear frame, all three would have been hard-sells theatrically beyond the festival circuit. For the home viewer, free to pause, to rewind and to take the plunge if the cost is already covered as part of a subscription, exposure to the stranger fringes of filmmaking becomes that little bit easier. Streaming is also hastening a wider convergence between film and TV: a Netflix-produced season of House of Cards might be watched in a single 12-hour binge, as could Bruno Dumont’s Lynchian four-parter for French TV P’tit Quinquin, whereas Diaz’s slow cinema can be more practically consumed in two or three sittings. (Next up MUBI’s corporate sleeves is Miguel Gomes’s six-and-a-third-hour feature triptych Arabian Nights, signed fresh from its Directors’ Fortnight premiere at Cannes.)

Junun, in its modest intention to be a crisply-produced, clear-eyed picture of an unusual recording session, will likely only be of lasting interest to those with a lasting interest in the music itself. No one will be arguing for it as more than a minor entry in Paul Thomas Anderson’s filmography, one perhaps better bracketed as a short than as a feature. But it may well be looked back on as another small step towards a very different cinematic terrain. The next significant shift will be for a niche online curator like MUBI to venture into production, as Netflix has with both television formats and, now, with Cary Fukunaga’s feature Beasts of No Nation.