Film of the week: Brooklyn

Exile makes the heart grow (and divide) in this superior Irish-emigrant drama, adapted by Nick Hornby from Colm Tóibín’s novel, and with a rare female viewpoint embodied by the excellent Saoirse Ronan. 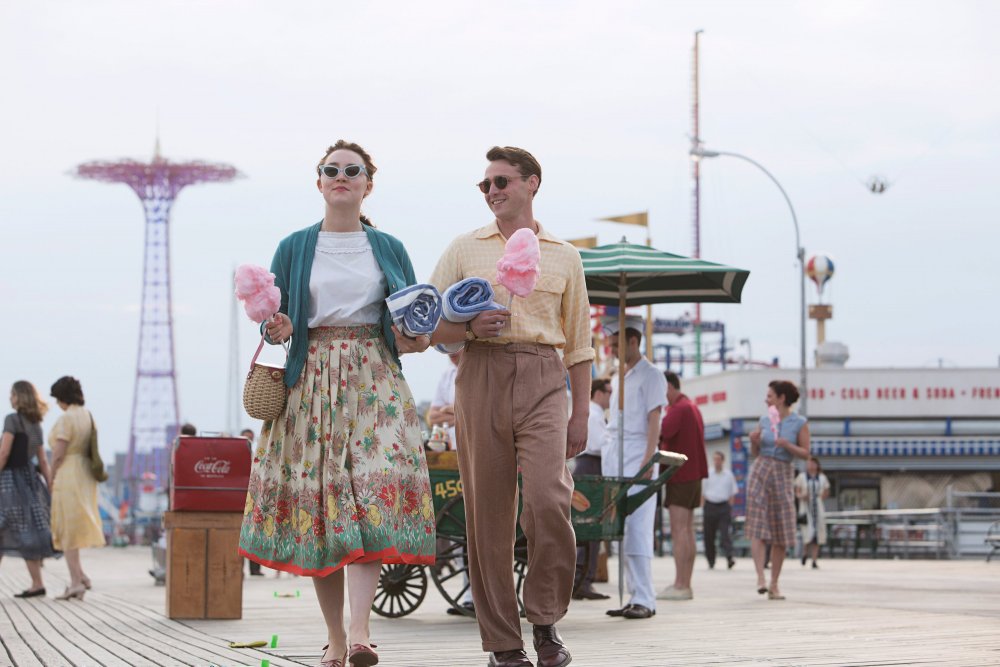 The Irish expat experience, a poignant mix of aspiration and nostalgia, pervades Brooklyn, sensitively adapted by Nick Hornby from Colm Tóibín’s 2009 prizewinning novel. Like much of Tóibín’s work, it’s rooted in the novelist’s hometown of Enniscorthy in south-east Ireland, and it’s there that the Irish-set sections of the film were shot. (For most of the Brooklyn exteriors, the production moved north of the US-Canadian border, with Montreal standing in for New York City.) Director John Crowley (Intermission, Boy A) is himself Irish, though he has worked for much of his career in London and New York, and Saoirse Ronan, playing the lead, was born in New York to Irish parents but grew up in the Republic, not far from Enniscorthy, in neighbouring County Carlow. For them, as for most of the Irish members of the cast, the sense of being torn between two – or even more – places must have spoken potently to their personal and inherited memories.

Ronan, who since her breakthrough role in Atonement (2007) has scarcely put a foot wrong, gives a subtle, understated performance as Eilis, a young woman who, largely at the instigation of her self-sacrificing older sister, finds herself transported from the gossipy claustrophobia of small-town provincial Ireland to the bewilderingly impersonal hubbub of New York. Time – the early 1950s – is no less crucial here than place, and Crowley’s film recreates both faultlessly, in unobtrusively placed detail and in the reproduction of period mores and dialogue. This, we’re made constantly aware, was a period when distance counted for a lot more, as did social conformity. Equally well judged is the use of costume, make-up and hairstyling to chart Eilis’s growing confidence and sophistication as she overcomes her initial awe of the big brash city and starts to feel at ease in its thronging streets.

This shift in mood and perspective is subtly mirrored by Yves Bélanger’s camera. During the opening scenes in Enniscorthy, its moves are cautious, constrained, as if reluctant to draw attention to itself. Once in New York, however, we start to get more of a sweep, a sense of free-and-easy strolling, even in the crowded streets or amid the bustle of Coney Island. And, when back again in Ireland, something of this transatlantic freedom is carried over, while at the same time we’re introduced to open vistas – especially in an idyllic episode on a beach – that seemed beyond Eilis’s horizons in her previous, more constricted life in her hometown. It’s an effect that’s further abetted by the texture of the lighting, which moves little by little from subdued to expansive. 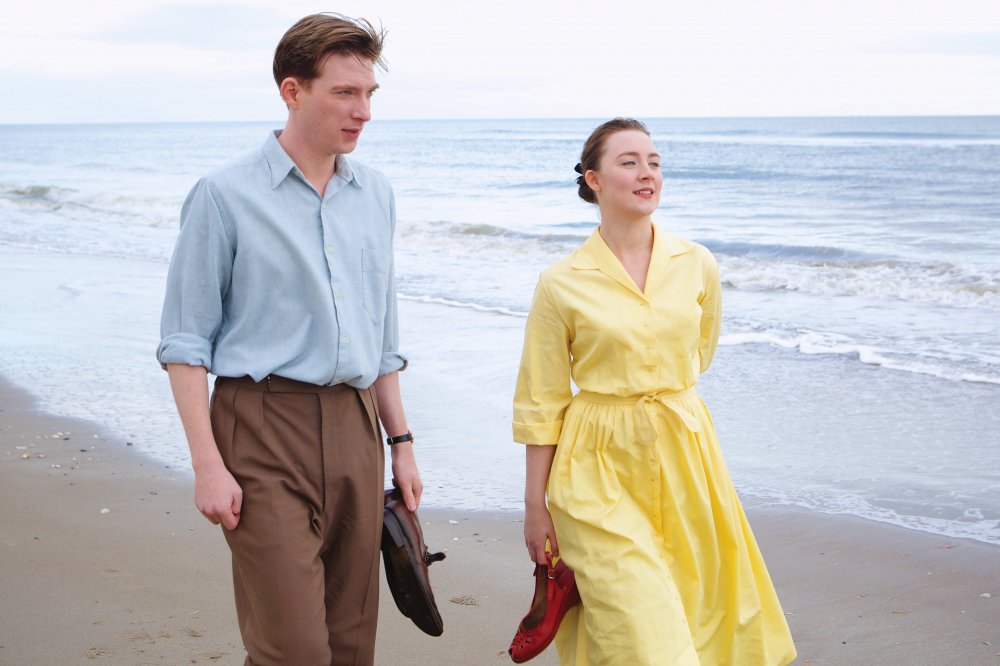 Given its plot outline – girl struggles to choose between two attractive men and two ways of life – Brooklyn might seem to be verging on Nicholas Sparks or even Mills & Boon territory. That it transcends any such romantic slush puddles is partly thanks to the uniformly excellent casting, but essentially to Hornby and Crowley’s fidelity to the spirit of their emotionally complex source material. One or two characters have been slightly softened: in Tóibín’s novel, Father Flood, the Irish-American priest who arranges lodging and work for Eilis in Brooklyn, has a touch of asperity underlying his benevolence; there’s little of that in Jim Broadbent’s performance. And while Julie Walters clearly relishes the sharp-tongued bitchery of Eilis’s landlady Mrs Kehoe, presiding over a tableful of flighty, frivolous girls, she’s a rather less censorious and oppressive figure than Tóibín makes her. The hint of lesbianism in Eilis’s glamorous supervisor at the clothing store where she works (Jessica Paré from Mad Men) is downplayed too – the film omits the scene in which she fondles Eilis’s bottom under pretext of fitting her for a bathing suit.

That apart, though, the film makes the most of its rich gallery of characters, not least Georgina (Eva Birthistle), the forthright blonde who teaches Eilis how best to survive her emetic transatlantic crossing; Frankie (a scene-stealing James DiGiacomo), her New York boyfriend’s outspoken eight-year-old brother; and the gloriously snobby and spiteful Miss Kelly (Brid Brennan), Eilis’s one-time employer in Ireland, whose malice precipitates her final decision. And then there are the two boyfriends: in Brooklyn, the gentle, instinctively courteous Tony (Emory Cohen) and, back home in Enniscorthy, the charming, well-spoken Jim (Domhnall Gleeson). This isn’t a film that deals in facile good boy/bad boy dichotomies; both young men are sincere, personable and highly attractive, and it’s easy to see (as Eilis herself can, all too clearly) that she could be happy with either of them. 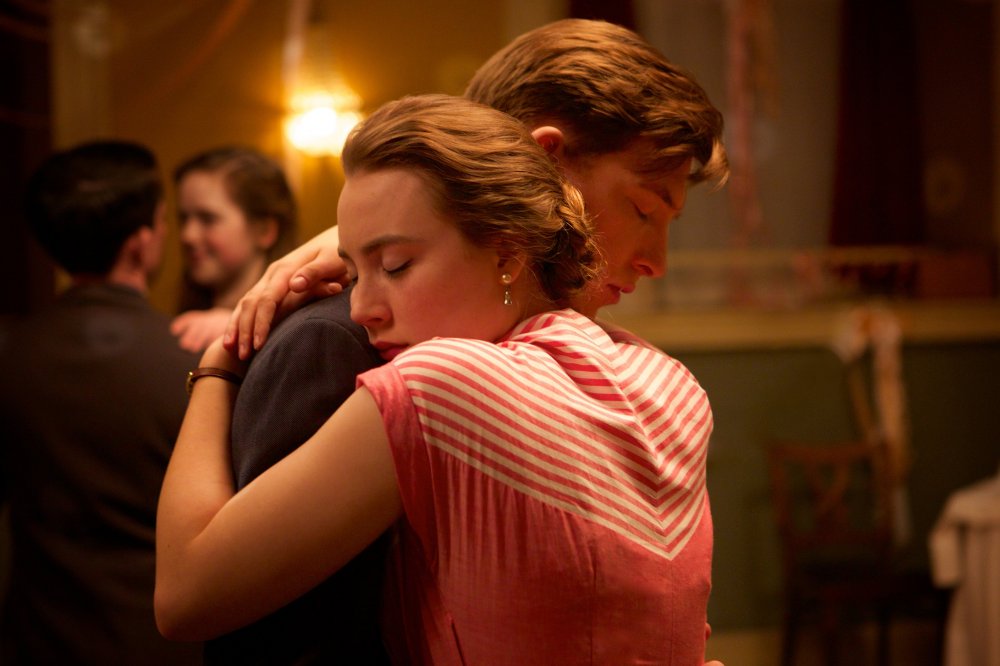 Her dilemma is all the more stark given that her life in Ireland begins to seem like a full-colour version of the drab black-and-white existence she led before leaving for the States. With her newfound American sophistication and dress sense, she’s a figure to admire and envy, a satisfying job is hers for the asking, and young men who previously ignored her are now eager for her company. And then there’s her widowed, newly bereaved mother, lonely and longing for her to stay. It says a lot for the filmmakers’ skill, and Ronan’s performance, that we feel as riven as she does.

The film’s most poignant moment comes earlier, though, when on her first Christmas away from home Eilis helps Father Flood serve lunch to a number of ageing Irish expats fallen on hard times. As warmth and alcohol thaw their desolation, one of the old derelicts stands and, in tones of heartfelt purity, sings a song in Erse. In his voice there’s all the sweet, aching sorrow of exile.

If the prevailing mood is bittersweet, Crowley and Hornby don’t neglect the novel’s opportunities for humour. The dinner-table scenes in the Brooklyn boarding house, with Eilis’s fellow lodgers competing to outdo each other in cynicism and bitchery until a tart interjection from Ma Kehoe cuts them off, are consistently diverting. As is another dinner-table episode in a rather different register: invited for the first time to meet Tony’s Italian-American family, Eilis impresses them with her spaghetti-eating skills – but honesty compels her to admit that she prudently took lessons from one of her fellow lodgers, a half-Italian half-Irish girl. And as Miss Kelly, Eilis’s employer who runs the snootiest grocery in Enniscorthy, reserving prompt service and the freshest produce for her ‘special’ (read higher-class) customers, Brid Brennan creates a relishable monster. 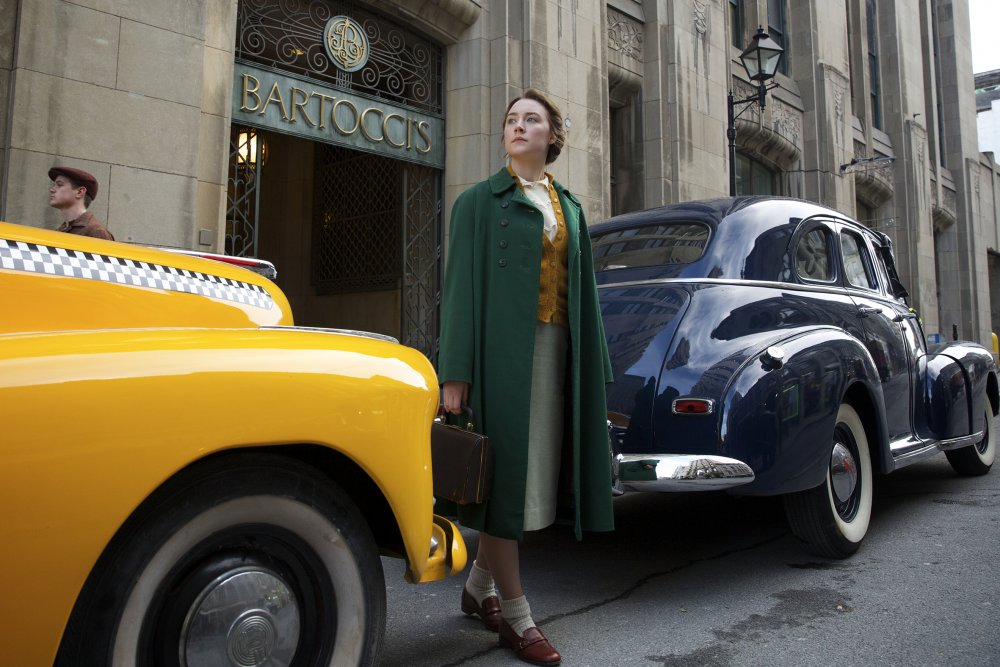 In some ways Brooklyn feels like a movie that’s not just about, but also from, a more innocent age. Though the country to which Eilis emigrates is the America of the Korean War and the Red Scare, we get no hint of those national traumas, and potential racial tensions are defused in the comedy of irrepressible little brother Frankie’s announcement, when Eilis arrives at the family apartment, that “the Italians hate the Irish”.

But this sidelining of harsher elements is perhaps only to be expected in a film that takes a conventional romantic set-up and, abetted by Michael Brook’s hauntingly melodic score, elevates it to a more intelligent dramatic level. Immigrant dramas traditionally tend to be male-led; but Brooklyn, despite Cohen’s break-out performance and the excellence of Gleeson, is female-led and all the stronger for it. In this, as in most other ways, it’s faithful to its source material.

Related to Film of the week: Brooklyn