The counter-cultural documentarian, novelist and pop video director leaves behind a remarkable body of work including films that captured the late-60s zeitgeist in full swing. 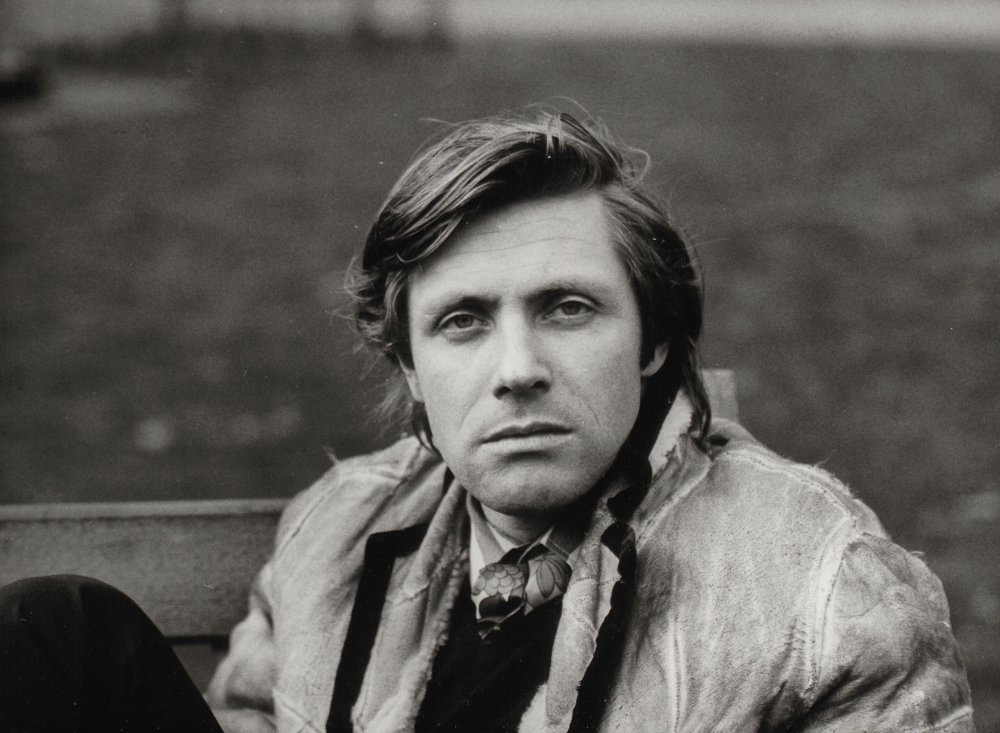 Is it possible to study and annotate a list of films and thereby understand their maker? Are the remnants of a director’s personality somehow impressed into codified material remains that they leave behind?

Underground filmmaker, novelist, falconer and music video pioneer Peter Whitehead is no longer in this world, a stunning, overwhelming fact to anyone who knew him or formed a fragment in his fragmented life. He was captivated by myths and in many ways sought to turn his own life into one. Films such as The Fall (1969) appeared to provide keys to the secrets of the media age and were undeniably potent, locking libidinal energy into swinging camera movements and tight 16mm edits. It was a hybrid piece about violence and revolution in the USA: part-essay film, part-avant-garde formalist work, part-personal film, part-psychedelia, part-reportage documentary.

In his guise as a counter-cultural documentarian, the strikingly handsome Whitehead, who has died aged 82, travelled the world, changed his identity, moved between classes and had relationships with numerous glamorous, often famous women – almost like a 60s spy. He was partially emblematic of the age by the way he went from a working-class background, the son of a Liverpudlian plumber, to Cambridge University, there making numerous connections that bubbled up later in his life. 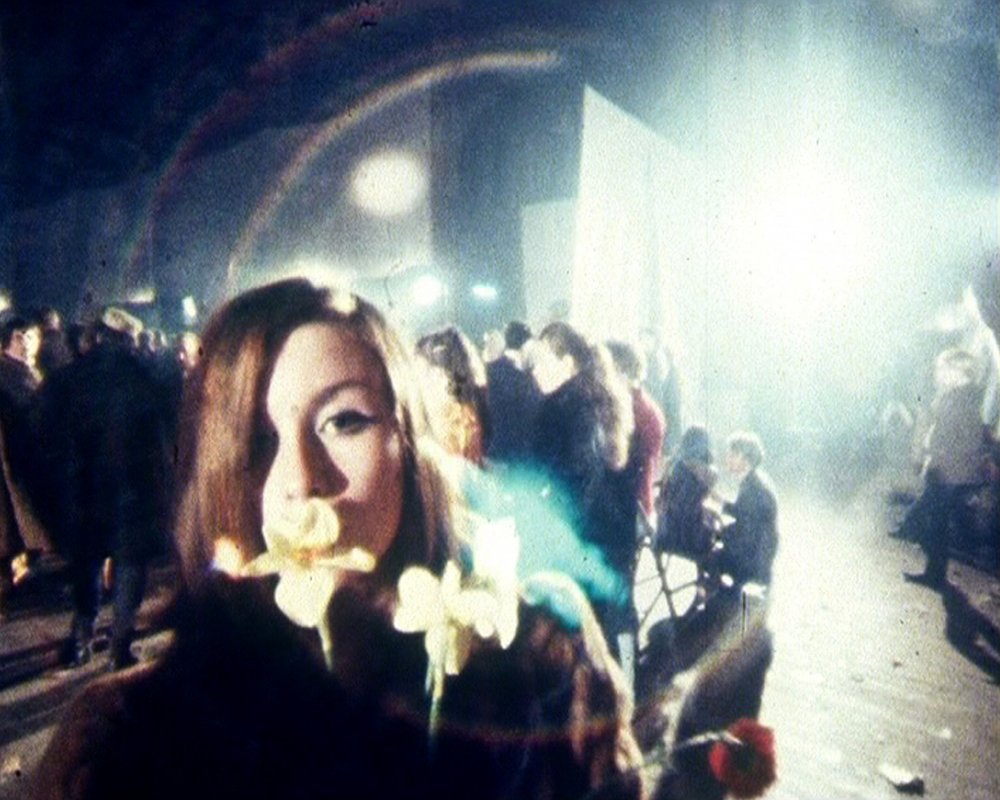 In his early films he remained off-screen but his urgent, restless personality still infected Wholly Communion (1965), his prize-winning 33-minute film account of the 1965 beat poetry reading at the Royal Albert Hall often credited with kickstarting the London underground, a phenomenon he later documented in Tonite Let’s All Make Love in London (1967), gleaning interviews with Julie Christie, Michael Caine and David Hockney, and pouring psychedelic lights and music by Pink Floyd into and over the gaps.

Such was the reaction to his poetry-reading film that he received commissions to document Peter Brook’s play about American imperialism, US (see Benefit of the Doubt, 1967), and the young Rolling Stones on tour in Ireland. The latter resulted in Charlie Is My Darling (1966), a film which like many of these pieces has been invisible for decades (it was finally released on Blu-ray and DVD in 2012), music rights issues complicating his legacy. If it can’t be seen, how can it be found?

Charlie Is My Darling trailer

His work was often received as examples of ‘direct cinema’, films captured on the move, with synch-sound, bringing audiences closer than ever before to so-called ‘reality’. He had worked as a cameraman for Greek and Italian TV whilst participating in one of the first ever filmmaking courses, at the Slade School of Fine Art in the early 1960s, after Cambridge, but his work was too cut-up and collage-like to neatly align with such a cool, distant approach. Rather, he looked to the New Wave and particularly Jean-Luc Godard, a life-long favourite and source of semi-infatuation. (In typical playful, contrary fashion, he contributed a piece to the 2004 book collection For Ever Godard entitled: Jean-Luc: I Hate You!)

He became increasingly concerned with interrogating reality and the affecting presence of the camera. The Fall had seen him explore his own impact on the films he made, and the political environments in which he found himself, in this case the 1968 occupation of Columbia University. 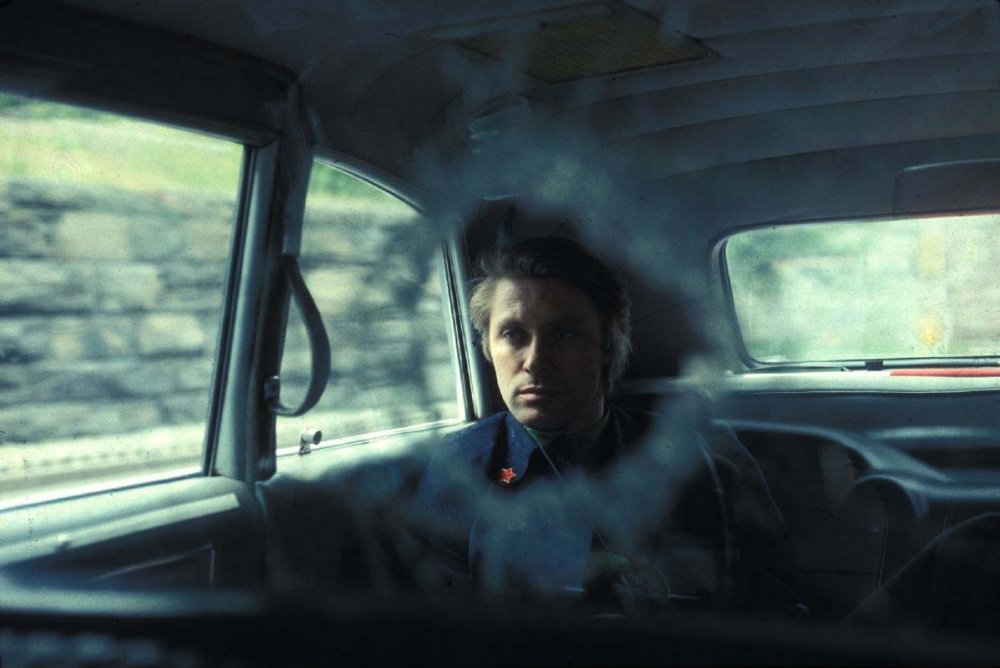 At one level a fierce individualist, latterly immersed in his own inner world and self-reflection – his diaries are reputedly many and lengthy – Whiteheard also went to considerable efforts to organise and provide a larger platform for alternative film. He played a role in the very early days of The Other Cinema, a key alternative film distributor and exhibition site, and the tendrils of his efforts and influence spread into Lucia Films which connected to the new radical, political filmmaking collectives Cinema Action and the Berwick Street Collective. The independent film journal/magazine Afterimage also listed his top-floor turret flat above the Pizza Express in Soho as an early home. (Artist Ian Breakwell discovered a giant eagle on the stairway during one visit.) 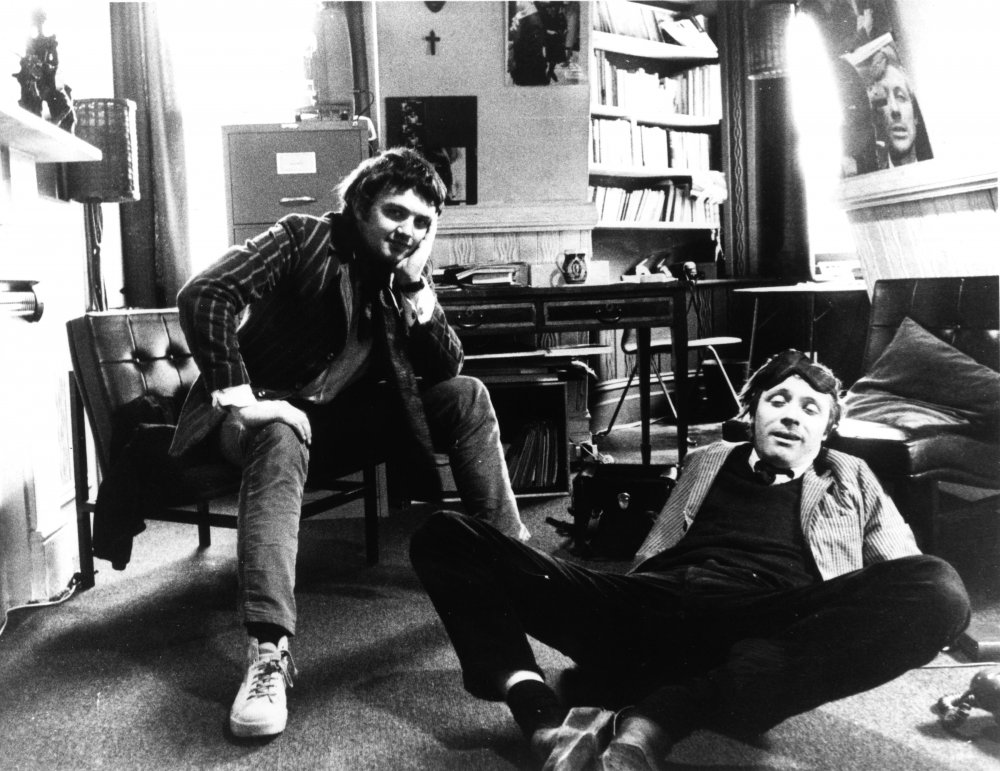 Peter Whitehead (right) in his Soho flat with Anthony Stern, the assistant director on many of his 1960s films

He also founded and ran Lorrimer Publishing Ltd, transcribing and printing European art cinema scripts and treatments, and worked with The Rolling Stones, Nico, The Animals and many more musicians besides to make iconic pop promos.

His films after The Fall, which have been relatively little discussed, perhaps because they float free from the documentary circumstances of his 60s work, presented a series of powerful collaborations which further unpicked his interest in myth and the psychosexual, these being: the unfinished Lilford Hall (made with Penny Slinger in 1969); Daddy (with Niki De Saint Phalle, 1973); and Fire in the Water (with Nathalie Delon, 1977). 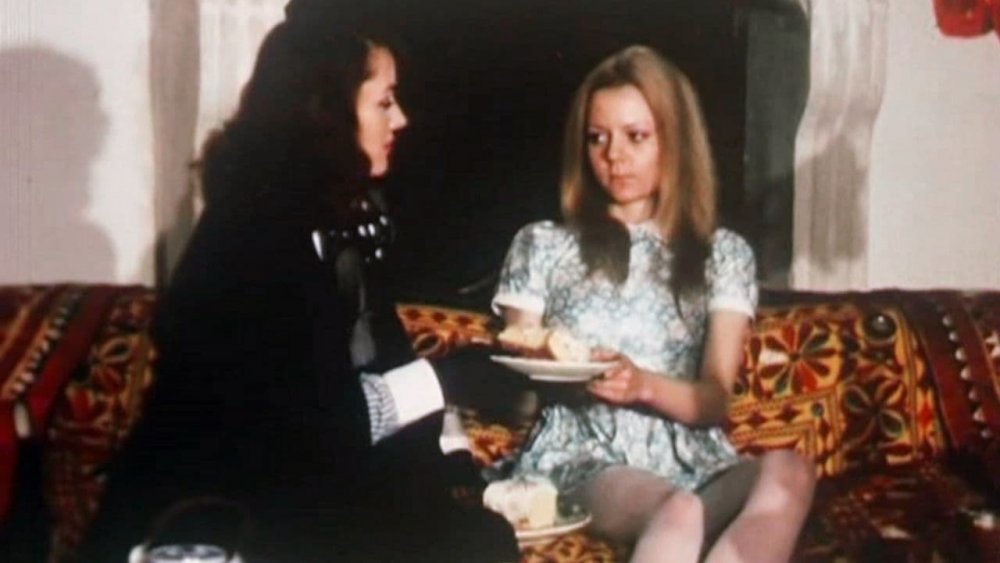 These are intense, rich films that, along with other unseen footage from the time, including the documentation of a trepanning, connect with the strange psychological fallout of the 1960s while exploring the furthest reaches of creative and sexual partnership. He and his co-creatives sailed into dark, uncharted territory and as time passes it may be this work that ends up being his ultimate, and shared, long-term legacy. Collaboration disrupted his sense of control while also reflecting his inner personal fragmentation and multi-faceted persona, always ready to find traction with someone else – for a time.

He fully immersed himself in whatever he was doing, and in the early 1970s took up falconry. This followed an earlier sublime encounter with a statue of the Egyptian falcon god Horus at the Fitzwilliam Museum, Cambridge, and a close, devastating read of J.A. Baker’s The Peregrine (a book also heavily admired by Werner Herzog). It led to the creation of the Al Faisal Falcon Centre in Saudi Arabia, an activity that was curtailed by the 1991 Iraq War. 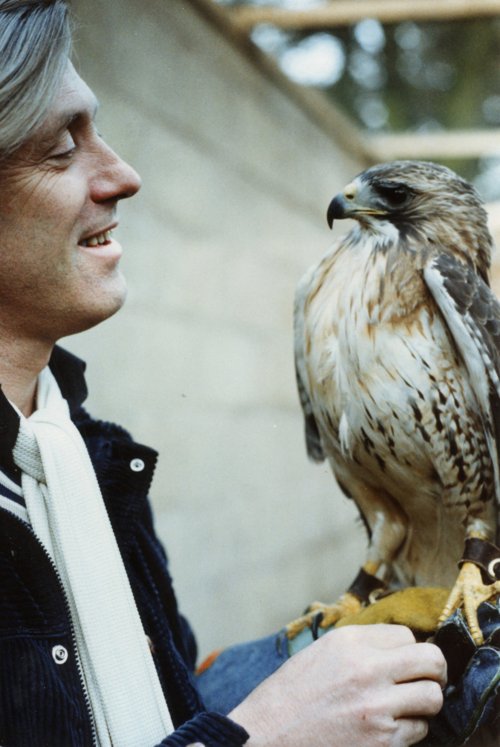 Linking up the full range of his activities was, and remains, a strong part of what has made Whitehead so fascinating. Chris Petit and Iain Sinclair tried to map – or rather highlight and further scramble – the complexity or plurality of Whitehead’s persona with 1998’s The Falconer, a confrontational film made for Channel 4 that wove footage of Whitehead after open-heart surgery together with fictionalised sequences and interviews with old friends, including the notorious drugs smuggler Howard Marks.

Shortly before that, Whitehead had taken to writing fragmented occult and metaphysical novels and had accrued something of an underground cult reputation, associating with Sinclair and Alan Moore. Terrorism Considered as One of the Fine Arts was turned into a 2009 film shot in Vienna, riffing on the city’s many associations and exploring circular narratives – while, naturally, blurring fact and fiction.

For someone so elliptical, wayward and at times deliberately provocative, occasionally in extremis, Peter Lorrimer Whitehead was a striking man who intrigued and made himself attractive to a great many people, even those who only met him for an afternoon. It was easy to pick up on the complexity of his persona, a complexity that went beyond his attempts to simultaneously challenge and enlighten, and his need to like, be liked, and to reject people.

He was compelling and, for those that knew him, this world is now undoubtedly a less mystical place – or just a lesser place. In counter-cultural circles, his legend always preceded him and now, and as of Monday 10 June 2019, as he attends to the permanent night-flight, he has left that legend with us. (A large part of his film material is with BFI National Archive whilst De Montfort University, Leicester holds his extensive papers. Contemporary Films has been his long-term distributor.) He was obsessed with death, symbolic or otherwise, and now it has finally taken him across the river. 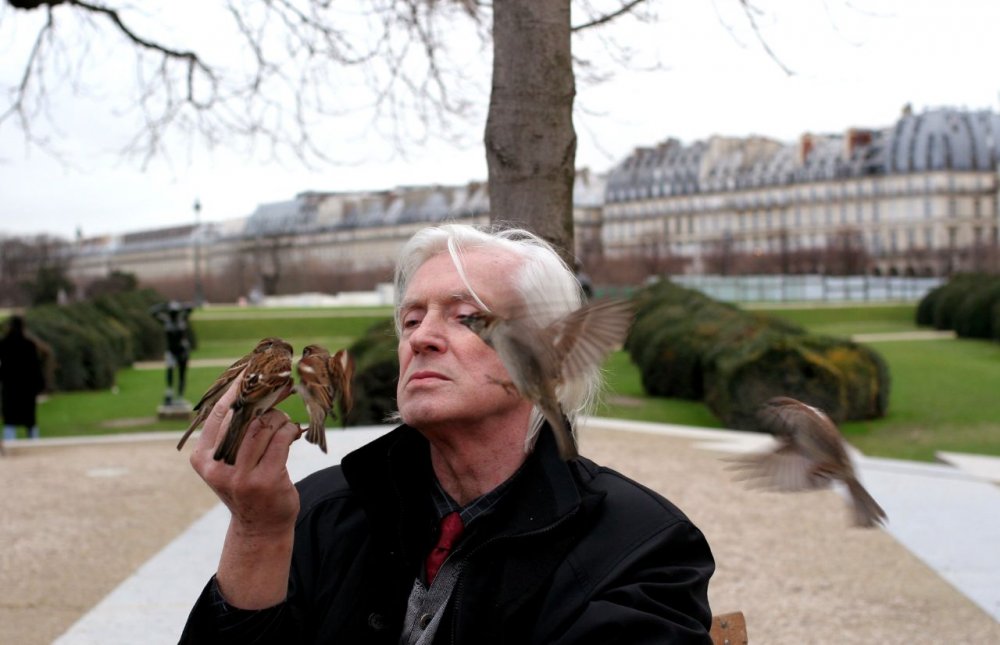 The ceremony of innocence (in our March 2007 issue)

In a brilliant four-year burst, Peter Whitehead shot footage of some of the seminal events o the 1960s. And then, at the height of his powers, he gave it all up. By Paul Cronin.