A rare peek behind the curtains at an ‘out-county’ London family’s informal festivities, in what was once the largest social housing development in the world.

Last month saw the fruition of the BFI’s ambitious Britain on Film initiative. Nearly ten years in the making, the project enables visitors to the BFI Player to browse 10,000 newly restored and digitised films from the UK’s national and regional film archives, now searchable by place name or postcode through the Britain on Film map.

Britain on Film is now online.

The London on Film season runs at BFI Southbank until October 2015.

London Screen Archives’ KinoVan is now touring the capital, bringing local film history to the streets and inviting collectors to bring in their own films for feedback and advice.

London’s Screen Archives, managed by Film London, is one of the organisations to have participated in the venture and among the most interesting: like Britain on Film, it mobilises without taking ownership of the holdings of over 80 different archives around the capital, from local boroughs to the Imperial War Museum. One such partner and beneficiary of the LSA’s preservation services is Barking & Dagenham Heritage and Archives, home to this month’s archive Byte.

The silent, four-minute film – along with 17 other home movies – was donated to the LSA by member of the public Tony Boulter. Talking with LSA archivist Louise Pankhurst while watching the combined 80 minutes of film shot by his brother, Tony was at a loss as to the film’s location: “I’m not sure whose house…” he reflected, trailing off.

Tony could be forgiven for forgetting: it’s been 50 years since the film was taken. But his uncertainty has rather more to do with the uniformity of the houses on the Becontree estate where he was raised: “They all looked the same,” he told Pankhurst, “so you can’t tell.”

Like many families in the mid 30s, the Boulters relocated from London’s overcrowded East End to the recently completed Becontree estate in the borough of Barking and Dagenham. Spanning four square miles of what was farming land before it was purchased by the London City Council (LCC) in 1921, Becontree became home to over 100,000 people, the majority rehoused from the slums of Bow, Poplar and Bethnal Green. With over 26,000 two-storey dwellings, Becontree was the largest social housing development in the world.

“Like heaven with the gate open,” said the mother of one resident still living in Becontree in 2013 after upheaving her family from Forest Gate to the estate in 1929. (Woven of interviews with several, long-standing inhabitants of the estate, the Heritage Lottery-backed half-hour doc Stories of Becontree – produced by UK charity Catch22 in conjunction with University College London – preserves for posterity memories that might otherwise have been lost.) Its carbon-copy properties had an indoor toilet, bath and garden – firsts for most tenants. The surrounds were Arcadian: when construction was finished in 1924 on the first 3,000 houses, their upstairs rooms afforded views of Hainault Forest, while the lake at the on-site Parsloes Park had flamingoes at one time.

But this leafy, clean-bill living took its toll on other types of town mouse, who had traded a network of neighbours and friends for nobody they knew. No fresh air or modern facilities or exotic birds could accustom some to the culture shock of ‘out-county’. Suicides were not infrequent among the first-arriving residents, who – as an extant tenant recalls – “couldn’t stand the quiet.” Until a high street sprung up along Heathway in 1934, the estate had no commercial hub. Nor was there any industry in the area prior to the opening of May & Baker pharmaceuticals and, shortly before, the Ford plant in 1931, famed for the equal pay protests by its sewing machinists in 68 and subject of the film Made in Dagenham (2010).

This month’s clip dates nearer to this era – 1966 – by which time the Boulters had had 30 years to settle in. Shot on a Super-8, it documents a Christmas gathering of family and friends – though without the giveaway greetings cards mounted on the sitting room walls, it might show any ordinary weekend, for parties were regular as clockwork, says Tony. (The open space of Parsloes Park was the LCC’s sole provision in the way of recreation. As a result, the people of Becontree learned to make their own entertainment.)

Alfie’s film, by contrast, is a rarity. It’s not often researchers at LSA turn up footage of interiors, perhaps because amateur filmmakers tend to shoot subjects more conventionally eventful: weddings, town shows, trips away from home. And while such occasions make up a great proportion of Tony Boulter’s collection, this festive party stands apart.

Admittedly, these are modest interiors, and to whomever the house belongs its fittings were non-differentiable from their neighbours’, familiar to every Becontree resident within a five-kilometre radius. The pelmet over the sash, the white gloss-paint, and the canopied front door were standard-issue, and with the height of the properties’ privet hedges subject to biannual inspection, even the gardens look identical from the lane.

The film opens in media res, on Rose – sister of Tony and Alfie – and their mother Mrs. Boulter. They sing and dance together, Rose wearing red and with an arm around her mother. It’s easy to see they’re related: their mouths are alike, though Rose’s is painted a shade to match her shift. A single pearl, hanging from a chain, rests to one side of the black false-button detail of her dress. Upon a cue we cannot hear, Rose helps her mother to hoist up her dress and bare a pair of lilac knickers: Mrs. Boulter’s party-piece, pulled on over nylons.

And there’s plenty more where that came from. Midway through the film, Mrs. Boulter re-enters, costumed in a homemade bunny suit. She has pinned her black bustier with a pompom on one side and white gift-bow on the other. The makings of her cottontail are harder to divine, though Tony’s unabashed brother-in-law seems determined to find out. She takes a turn about the room, striking sort-of Playboy poses. Moving very near the camera, we see her left-hand flat under the wicker drinks tray, her wedding ring and the whiter skin between spread fingers.

When presented with footage of a wedding, one anticipates certain things: confetti and a getaway car, for instance. If a street parade, we’ve eyes peeled for a marching band, perhaps. But expectation makes us deaf to details we hadn’t looked for. It distracts us from the commonplace. And more often than not, it’s of this we wish to be reminded: the sturdier variety of party hat sold in the 60s, say, or the tissue paper held tight in the hand of more than one woman in this particular film.

But there is no predicting the content of Alfie’s four-minute reel; no guessing before watching the behaviour of the guests congesting the dance-floor. No one stands on ceremony in this Becontree council house; everybody is his own man or woman, isolatable. It goes to show that however homogeneous the four walls inside of which this close-knit community went about its business, the individuals that made it up were singularly charismatic; as one-off as the exuberant, exhibitionist Mrs. Boulter. 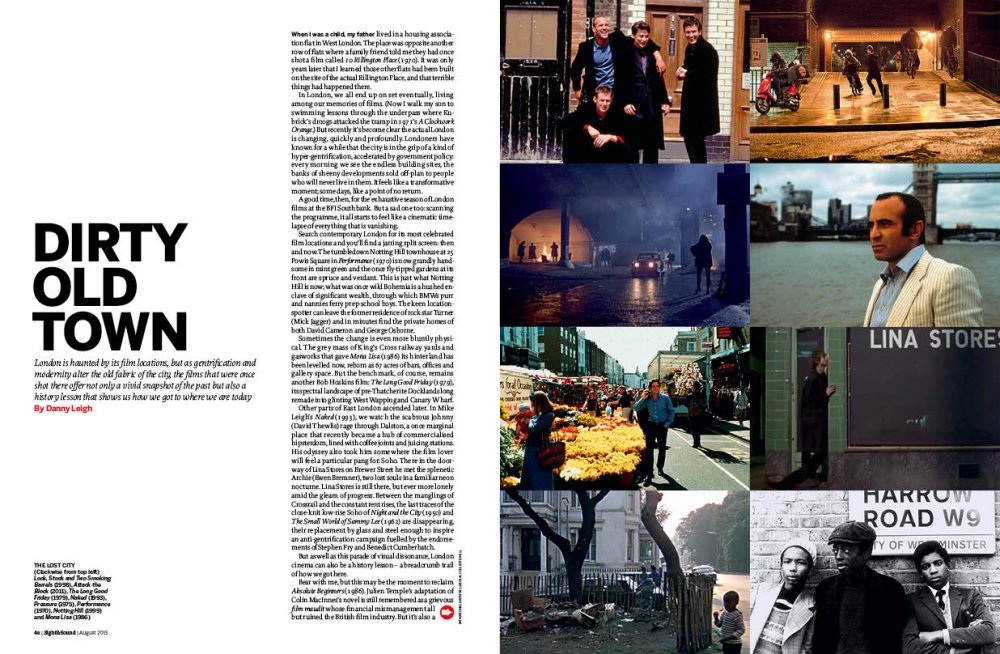 London is haunted by its film locations, but as gentrification and modernity alter the old fabric of the city, the films that were once shot there offer not only a vivid snapshot of the past but also a history lesson that shows us how we got to where we are today. By Danny Leigh.