Sex, experimentation and the urge to change the world for the better run through the fascinating oeuvre of the filmmaker who almost singlehandedly defined lesbian cinema. 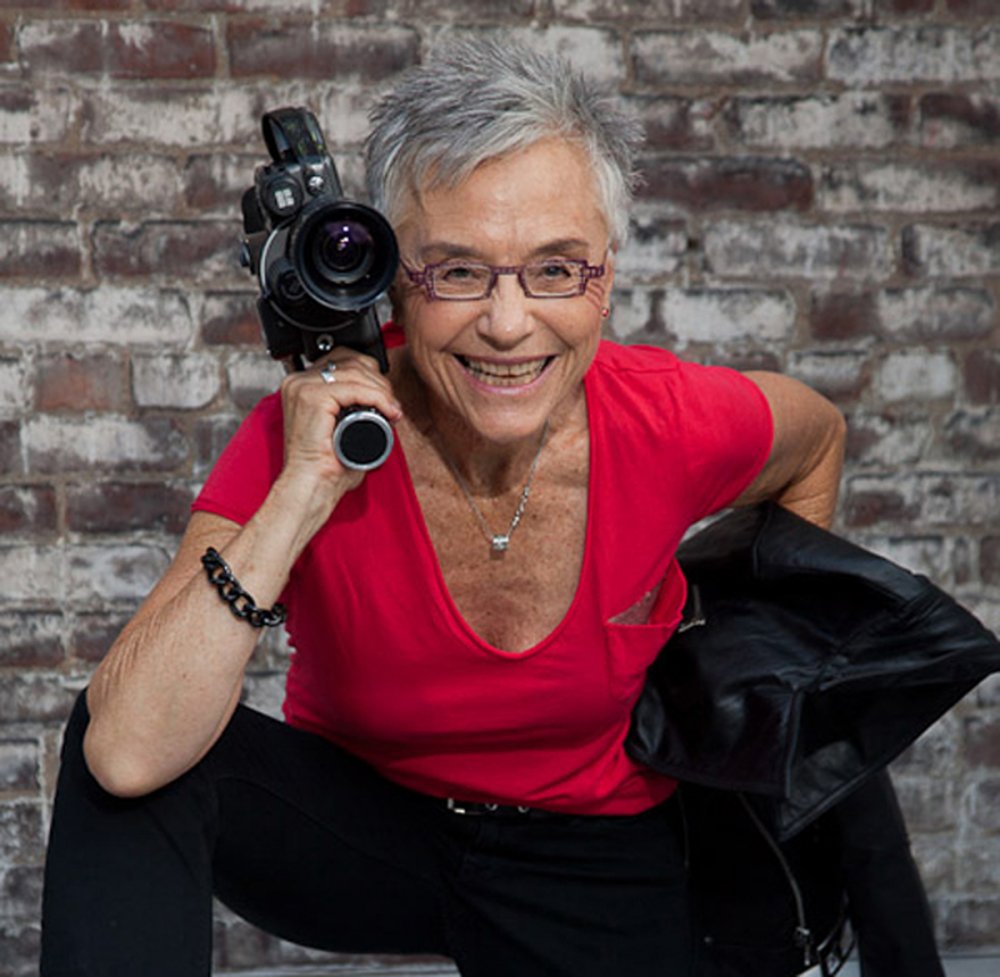 The Barbara Hammer Lesbian Experimental Filmmaking Grant is, like its namesake, one of a kind. Founded by filmmaker Barbara Hammer in 2017 with the proceeds of the sale of her paper archives to Yale University, the grant recognises and continues Hammer’s unique contribution to American, experimental and global screen arts. Summing up the rationale of both her artistic oeuvre and the foundation of the grant, Hammer wrote:

It has been the goal of my life to put a lesbian lifestyle on the screen. Why? Because when I started I couldn’t find any! …I picked up a camera in the 60s, late 60s, made Super 8, 8mm, finally went to school and got a 16mm camera. Made 13 films in two-and-a-half years. All experimental. Because I think that as a lesbian at that time I was living an experimental lifestyle. Well let’s just say, I was experimenting. And I still am. And I think that lesbian film really calls out for experimental work.

The dual threads of Hammer’s career ran from its foundations in California in the 1960s to her death from cancer in 2019: an avid search for queer precursors in the archives, resulting in vivid accounts of the lives of (among others) Willa Cather and Bessie Smith (in Nitrate Kisses 1993), Claude Cahun (in Lover/Other, 2006), Maya Deren (in Maya Deren’s Sink, 2011) and Elizabeth Bishop (Welcome to This House, 2015); and the exuberant generation of experimental images of contemporary lesbian life, with her own at the pulsing heart. In her early film Dyketactics (1974), still one of her best-loved for its radical depiction of lesbian sexuality, Hammer appears on camera making love to Poe Asher in a scene that flows from an arcadian image of a collective of naked women in a northern Californian meadow.

Hammer’s film arrived only four years after the formation of Lavender Menace, an informal group protesting the exclusion of lesbians from the American feminist movement. To reclaim the word ‘dyke’ in the title of the film was exemplary of Hammer’s irreverent clarity, the wit and determination with which she centred lesbians in history, whether cinematic or otherwise. The following year she created a pop-history origin myth for her community in Superdyke! (1975) made improvisationally, like Dyketactics and her other films of the era, by a collective of friends and lovers, then screened to community audiences where the screen operated as a dreamy mirror. 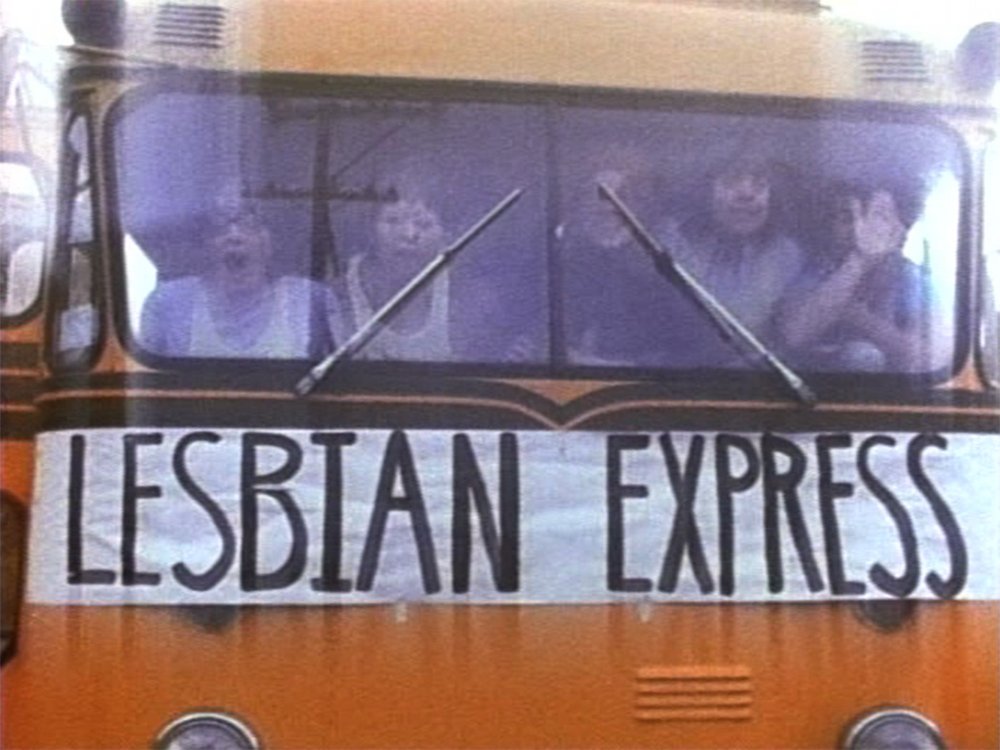 By the time Hammer was making these films, she was in her mid 30s, having been born “a child of the Depression” in 1939, as she writes in her memoir Hammer!: Making Movies Out of Sex and Life. She married in her sophomore year at UCLA, and travelled with her husband Clay Ward around the world on $1,000, before settling north of San Francisco.

From there, Hammer’s life reads almost as a paradigm of the late 60s queer awakening: she studied visual arts with William Morehouse, got a Super 8mm motor-driven Bolex, heard about feminism on Berkeley college radio, joined the Santa Rosa Women’s Liberation Front, met her first girlfriend and travelled across Africa with her on a BMW motorbike (Hammer rode with Dykes on Bikes in Pride parades for many years subsequently). This was the experience that fell between Hammer’s first 8mm films and the revelation of Dyketactics – and the energy of its novelty, the sense of being part of a new world in which personal sexuality, social change and cinematic form were interfused, would fuel her work thereafter. 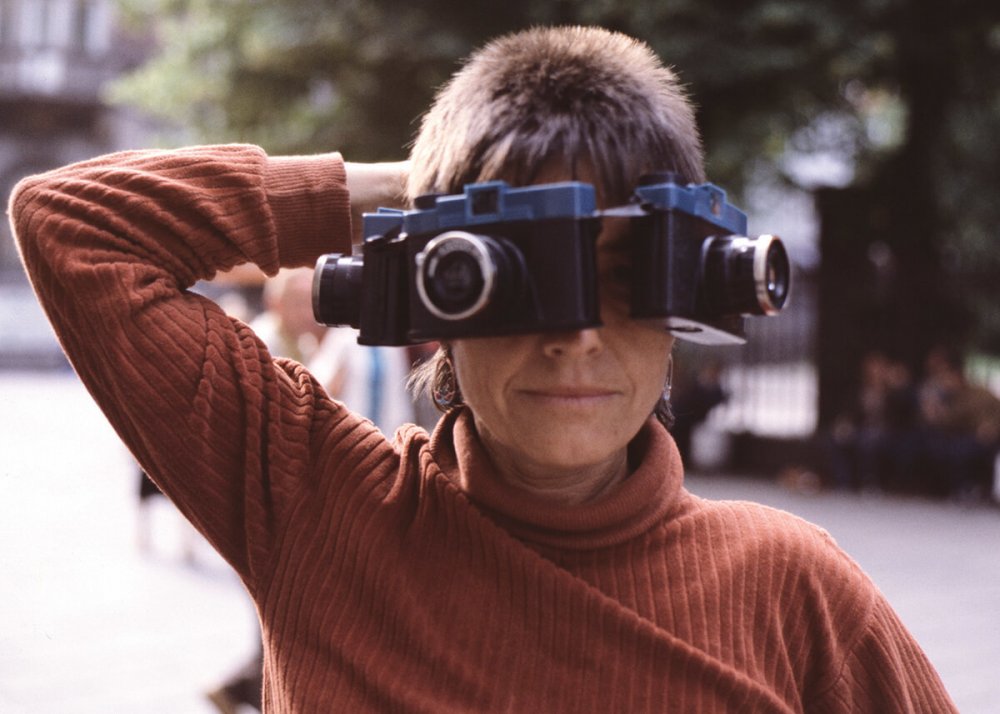 From 1975, which included not only Superdyke but also the tender and companionable portrait film Jane Brakhage, which provides a feminist corrective to Stan’s Water Window Baby Moving (1958), Hammer moved to 16mm, continuing to work collaboratively and document/invent lesbian life. The pinnacle of this era is Double Strength (1978), made with her partner Terry Sendgraff, a movement and trapeze artist. The film began as performance pieces, in which, as Hammer notes in Hammer!, “We performed in the nude as there were no adequate outfits that would show our muscles.” Double Strength flaunts both physical and cinematic muscle, which inscribes the arc of a relationship through trapeze performance and disjunctive sound-image relationships, while refusing melodrama and the trope of the tragic lesbian.

But times were changing rapidly, and Hammer’s hippy celebrations of female embodiment, desire and community met with criticism from multiple directions: not only the male-dominated avant-garde, but also from theoretically informed feminists who were increasingly moving towards a counter-cinema that excluded depictions of the female body. Astutely, Hammer began documenting reactions to her films, resulting in Audience (1982).

From the physical, Hammer moved to physics, and from California to New York: 1984’s Bent Time, her most ambitious film thus far and scored by Pauline Oliveros, marked her move across the continent by shooting at high-energy (mystical and scientific) sites across America with an extreme wide angle 9mm lens, until “the Statue of Liberty began to jitterbug” – with no other female body in sight. By the mid-1980s, influenced by her long-term partner, activist Florrie Burke, Hammer shifted her focus to Aids activism and media representation of LGBTQ+ people (for example in 1986’s Snow Job: The Media Hysteria of Aids), shooting on video and editing on a computer.

These video projects, with their intensive focus on editing, led her to the archival research and filmmaking that would come to dominate her later work. Starting with Sanctus (1990) and Dr. Watson’s X-Rays (1991), Hammer worked with the archives of X-ray pioneer and gay filmmaker Dr James Sibley Watson, whose ‘lost’ Hollywood gay Biblical epic Lot in Sodom (1933, with Melville Weber) plays a central role in Hammer’s first feature-length film, and her magnum opus, Nitrate Kisses. Combining her earlier experience as a documentarian of sexuality with her archival work, Nitrate Kisses is an immensely sophisticated, sobering and yet joyous film about pre-WWII queer lives in the US and Germany, a stand against Nazism and other manifestations of homophobia made at the end of a decade of Republican rule.

Subsequently, Hammer worked largely at feature length, combining documentation of her own history and lesbian history in the two follow-ups to Nitrate Kisses: Tender Fictions (1995), which explored her self-construction as an artist, and the broader-brush archival trawl History Lessons (2000). She worked and made films in South Africa (the radical video Out in South Africa [1994]), Japan (Devotion: A Film About Ogawa Productions [2000]), and South Korea (Diving Women of Jeju-do, 2007) as well as the trio of historical bio-docs that crowned her career. In the midst of these was A Horse is Not a Metaphor (2008), a film about her treatment for and recovery from breast cancer, which addressed her older, survivor body and the world with the same rigour, generosity and curiosity as her films of the 70s.

The teens of the new century have seen a rising interest in her work from major festivals and institutions, including retrospectives at Tate Modern and Moma, and a New York exhibition of Hammer’s visual art as well as the publication of Hammer!. Far from settling into elder stateswoman status, Hammer continued to shake things up: in London, as well as bringing over younger queer artists like Emily Roysdon to reinterpret some of her older material, she crossed the Millennium Bridge to visit the Occupy camp outside St Paul’s, and screened raw footage from a Queer BDS visit to Palestine. Over the last year, Hammer had become an outspoken right-to-die activist, giving her performance lecture The Art of Dying or (Palliative Art Making in the Age of Anxiety) three times at major US venues.

And her work of making movies out of sex and life continues. As Burke told Masha Gessen in an interview for the New Yorker:

Barbara got a grant from the Wexner Center to finish five unfinished works. She wasn’t well enough to finish them. And she had an idea: What if I choose a filmmaker that I think would be appropriate for each of the five? Can they have the money to finish the work? And they went for it. The date is this summer to finish. One was the one about deaf people with Aids, and, yes, I worked on that with you. That was fun.

Miatta Kawinzi, 2018 winner of the Barbara Hammer grant, is at work on her experimental installation SHE GATHER ME, and the 2019 applications will open soon. Hammer’s archivist Krystyna Mazur is finishing a book on Hammer’s 16mm glory years. Hammer concluded Nitrate Kisses with a quotation from her contemporary Adrienne Rich’s essay It is the Lesbian Within Us…:

Whatever is unnamed, undepicted in images, whatever is omitted from biography, censored in collections of letters, whatever is misnamed as something else, made difficult-to-come-by, whatever is buried in the memory by the collapse of meaning under an inadequate or lying language – this will become, not merely unspoken, but unspeakable.

Working in the absence of precursors, Hammer defined lesbian cinema almost single-handed, with the double strength of her formal experimentation and her political commitment. Her generosity of spirit, intellect and embodiment lives on in the films she made that changed the landscape not only of cinema, but of our queer lives and histories.