This celebration of abstract art cinema in Wrocław offered a holiday from conventional filmmaking and the chance to watch films liberated from narrative and commerce on their own, wild terms. 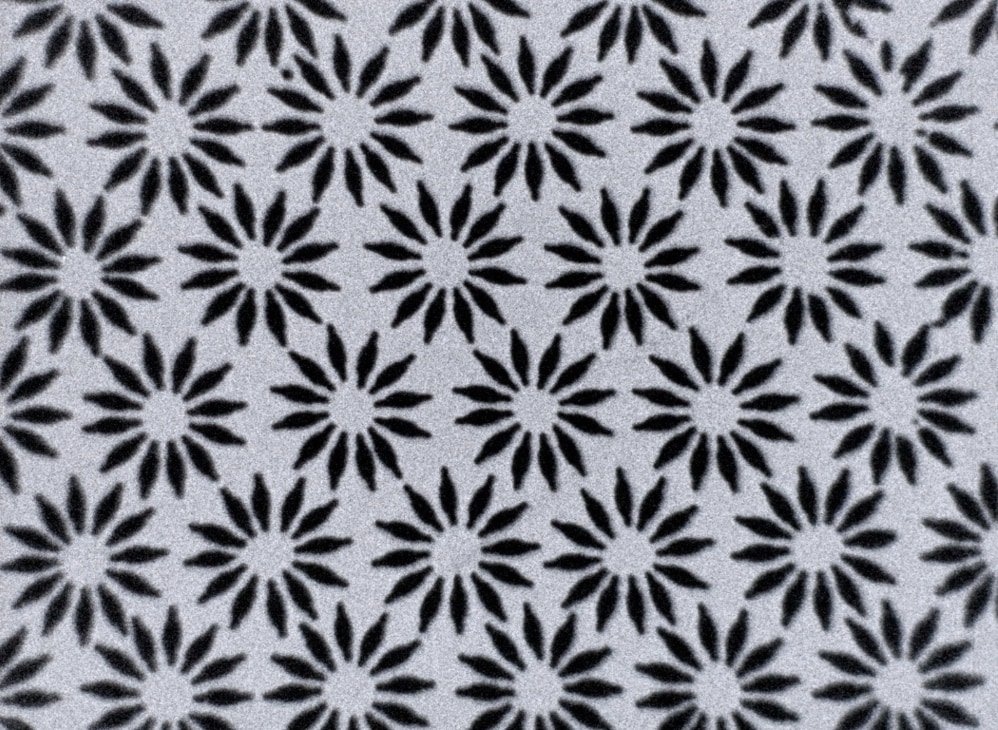 Michael Lyons’s Katagami, made from kimono stencils and developed in matcha tea, won a special mention from the Punto y Raya jury

I recently emerged blinking and discombobulated from the seventh edition of Punto y Raya, a biannual celebration of ‘abstract art in motion’ which started life in Spain in 2004 and this year landed in Poland. “It’s going to be… intense” announced co-director Noel Palazzo in her opening speech, as we hunkered down for four days of screenings, performances and installations with nary a scrap of dialogue or conventional narrative to be found. Blobs, squiggles and dashes were our stars (‘Punto y Raya’ is Spanish for ‘Dots and Lines’), our soundtrack a stew of jazz, electronic noise, found sound and occasional dog barks. Home was Wrocław’s Centrum Technologii Audiowizualnych (CeTA), adjacent to the imposing Centennial Hall – a centrepiece in the city’s recent turn as European Capital of Culture – and itself once a studio where films including Knife in the Water, Ashes and Diamonds and The Saragossa Manuscript took shape.

The opening short film programme helped to sketch out a parallel Polish film tradition with its own fluctuating fortunes, spearheaded in the 30s by experimental pioneers Stefan and Franciszka Themerson. Once they were exiled to the UK during the war, abstraction virtually disappeared from Polish cinema in favour of the social realism demanded by Soviet policy, until a creative explosion heralded in the late 50s and 60s by the likes of Andrzej Pawlikowski and his magical Kineform series.

In her introduction, curator Ania Głowińska spoke wryly of toppling dictators, and although she was referring to the influence of Disney it was hard not to think about the tension between totalitarianism and abstraction – then and now. Were we hiding in a bubble of decadent formalism while populist demagogues ran riot outside? It was clear from the British panorama at the other end of the festival that abstraction needn’t mean a disavowal of politics, with filmmakers in the Q&A citing 9/11, Edward Snowden and London’s hyper-capitalism among the sources for their films, while Vicky Smith described the impetus for her work as a withdrawal, the reaction to “a surfeit of stuff in the world”.

This notion of a withdrawal or a holiday from conventional filmmaking popped up often during discussions. Within the title of his short ATPC Javier Viera concealed a coded ‘stick it up your ass’ to his paymasters in the advertising world, and Ukrainian director Nikita Liskov used the proceeds from a prize-winning narrative short to buy him the time to make Energy Off. When an audience member wondered if he would continue with this kind of work, Liskov shrugged, “Well, I have to live,” provoking much rueful laughter. I was asked at least twice what faculty I was from, and it was clear that higher education was helping to sustain a good deal of this practice – lending a slight feel of an academic symposium to proceedings.

Craving narrative at one point, I made a brief foray across town to the New Horizons cinema (an arthouse multiplex spawned by the festival of the same name), which was packed to the rafters for the American Film Festival. While it was heartening to see young Polish cinephiles out in force, the 15 minutes of sponsors’ messages before each screening was jarring after the ad-free bubble at CeTA.

At first glance, the territory covered by Punto y Raya can seem relatively narrow, but once immersed within this world you quickly discover multiple sub-genres and a dizzying array of methods and means from hand-scratched celluloid to the “turbulent algorithms” of generative art.

One recurring image stayed with me through the weekend, that of a circle within the screen’s rectangular frame. It was there in Josef Robakowski’s Test (1971), made by punching holes in 16mm leader; in Kayla Parker’s Sunset Strip (1996), a direct cinema compendium of 365 setting suns; in the IP Group’s hypnotic installation Transforma, where multiple sheets of gauze turned a circle into a tunnel of light; and in Thorsten Fleisch’s Energie! (2007), featuring an electrical eclipse effect which he revealed during his masterclass was created by pushing 30,000 volts through a disc of sliced bread. Punched holes, painted leader, projection tunnels and electrified bread – a fair reflection of Punto y Raya’s variety.

The other thing that stood out was the almost complete absence of scrolling credits. There were over 100 shorts within the competition programme, the vast majority of them made by one or two people. The form offers a poem-like space for focus and simplicity, and much like poetry there is no room to hide – each frame needs to count. On the festival’s final evening we gathered to witness the distribution of Punto y Raya’s incongruously shiny and phallic short film awards, with all four choices embodying a sense of both play and economy.

Michael Lyons’s Katagami, a joyous silent piece made from kimono stencils and developed in matcha tea, picked up a special mention, and third prize went to the 90-second Google Earth collage Arena by Páraic McGloughlin. Local couple Aga Jarząb and Maciek Bączyk had helped open the festival with a performance as visual duo kinoMANUAL and their short 25/25 was a hugely popular choice for second prize, while top honours went to Nottingham-based artist Jonathan Gillie for Study in Colour and Form I-IV. The fascination exerted by Gillie’s video synthesiser work is hard to explain, but the tender care which he brings to choreographing blocks of light and sound is oddly moving.

Many of the filmmakers I spoke to felt that their work was often at risk of falling down the cracks between film and art, and the value of Punto y Raya for them was clear – not just as a source of creative sustenance, but a place where their work can be seen big and loud on its own terms.