A round-up of recent highlights from the Philippines’ broad and bustling film industry – and a missive from Mongolia that couldn’t be ignored. 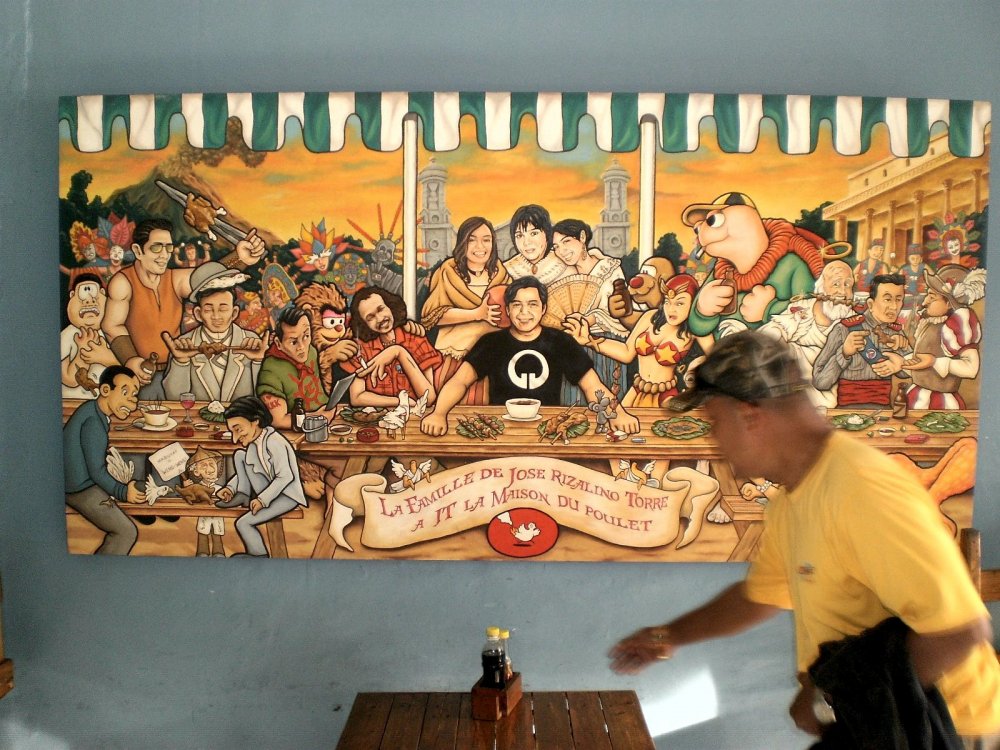 For Westerners, the exotica of the Far East has never been closer, including the treasure house of cinema from this large and diverse region. Yet, as always, the curious viewer first needs to know what’s out there.

This is where festivals like Terracotta come in, not just showcasing a carefully curated selection of films from those nations – Japan, Korea, China, Thailand – that have come to dominate the export markets of the Far East, but also casting light on national cinemas traditionally underrepresented in the West. This latter category includes films that are marginalised not necessarily for the obscurity or extremity of their content, but rather because of the vagaries of both local film economies and international distribution.

This year, alongside many of the (welcome) ‘usual suspects’, from Tony Jaa’s latest vehicle of Muay Thai ultraviolence Warrior King 2 to Kim Ki-duk’s comically controversial castration shocker Moebius, there is a special strand putting a spotlight on cinema from the Philippines – and there is also a title from Mongolia.

“What do you remember about Weng Weng?” This is Australian filmmaker Andrew Leavold’s very first question when granted a special audience with Imelda Marcos, infamous former First Lady of the Philippines during her husband Ferdinand’s 20-year dictatorship. The eponymous subject of Leavold’s The Search for Weng Weng (2013) was the star of a number of low-brow, nuance-blind action pictures (chiefly James Bond rip-offs and bizarre westerns) in the early 1980s. 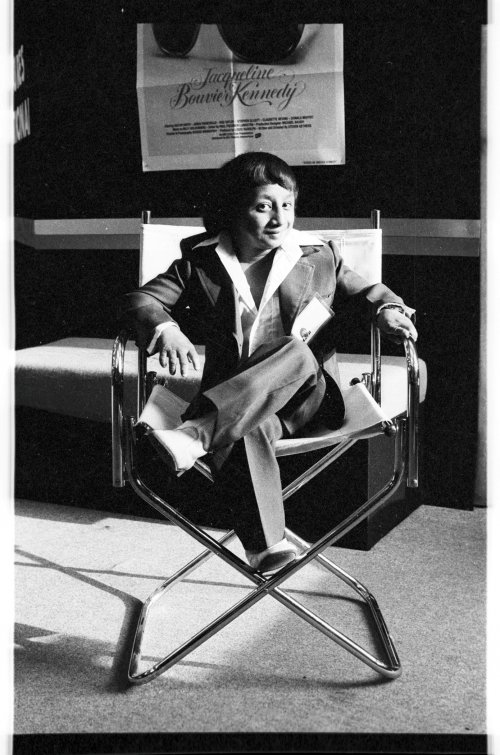 Born Ernesto de la Cruz, and with a growth deficiency, by the time Weng Weng became an actor (of sorts) he was an adult in the body of a small child, ensuring that he cut a striking, if diminutive, figure on screen. In the first Manila International Film Festival, held in 1982 as a cultural smokescreen for the Marcos’ repressive militarism, serious local films like Peque Callaga’s Oro, Plata, Mata were overlooked by international distributors, who were instead drawn to the misproportioned novelty of For Y’ur Height Only. This was the only homegrown film to sell at the festival, and one of three titles in which Weng Weng played – badly – the innocent-yet-deadly Agent 00.

For a few years, Weng Weng was the country’s mascot and an international star, before he died, impoverished and forgotten, in 1992. Yet if he helped put Filipino cinema on the map, he also bolstered an image of the nation as a sort of tasteless freak show. It was an image which the international community was all too happy to embrace with a mixture of base pleasure and supercilious derision – and one the Marcoses, in their way, also projected to the world. So while Leavold’s question to Imelda Marcos might at first seem surreal, in fact it cuts to the very heart of his documentary.

Overlapping to a degree with Mark Hartley’s Machete Maidens Unleashed! (2010), Leavold’s quest to uncover the man behind the legend becomes an affectionate if bittersweet history of Filipino exploitation cinema – and, of course, stars like Weng Weng were the most exploited of all, by money-grabbing producers, by rubbernecking viewers and even by heads of state.

“The appearance of Weng Weng showed the great Filipino spirit,” Marcos tells Leavold. “They can make a hero of a disabled, distorted guy – so everybody had a chance.” She then makes Leavold and his crew guests of honour at her grand 83rd birthday party, still unable herself to resist the lure of their myth-making camera, no matter how grotesque and distorted the image it captures. The talking heads who look back on the Marcos era have nothing but contempt for Imelda and her husband, but all admit grudgingly that it was a time when the Filipino film industry flourished as never before – or since. 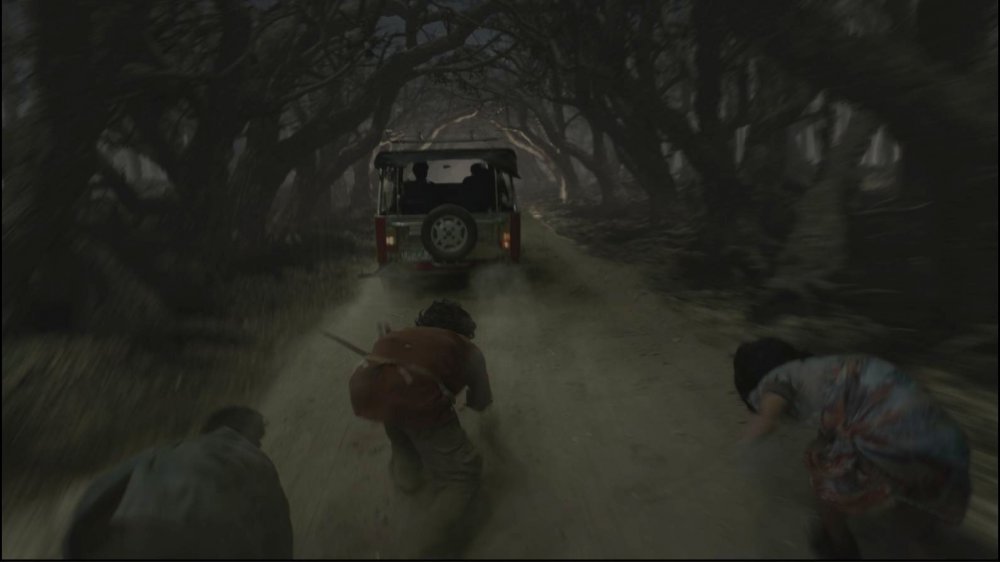 The industry is, however, enjoying something of a renaissance, and not just for producing generic crap spiced with a dash of local colour – although Erik Matti’s Tiktik: the Aswang Chronicles (2012), screening as part of this year’s Terror Cotta Horror All-Nighter, comes very close.

City slacker Makoy (Dingdong Dantes) arrives in remote Pulupandan hoping to woo back his pregnant ex Sonia (Lovi Poe), only to find himself trapped with her family by local bloodsuckers (known as tiktik or aswang) that want Sonia’s baby for their late-night supper. This is the first Filipino film to have been shot entirely on green-screen chromakey, so that there are at least some oddly stylised backgrounds against which all the one-dimensional characters can play out their sub-Night of the Living Dead siege routines. But the only thing memorable here is the bizarre hybrid nature of the aswang themselves, combining vampires’ aversion to garlic and salt, werewolves’ shape-shifting powers, and a deep aversion to stingray tails that is all their own. 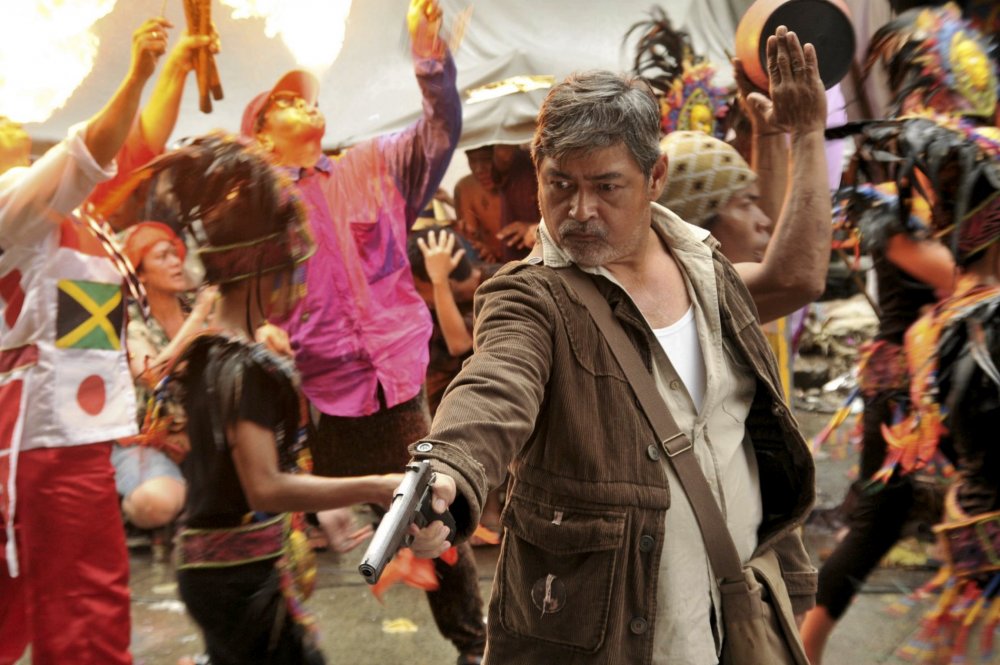 So it is hard to believe that, only a year later and for half the budget, the same director should make a gritty, sprawling crime drama shot handheld and grounded in realities ripped straight from the headlines. Yet Matti’s festival opener On the Job (2013) is an audacious trawl through the gutter of Manila’s political structures, evoking the very best conspiracy thrillers of the 70s while remaining utterly contemporary and local. Its parallel tales of prison convicts granted day release to carry out political assassinations, and of low-level police struggling to uphold the law against bent, murderous lawmakers, anatomise a nation where corruption has seeped into every layer of society.

On the Job never glamourises its violence, nor glorifies its killers – on the contrary, it takes a hard, ultimately despairing look at a system that perpetuates itself with brutal, bloody efficiency, so that even professional murderer Tatang (Joel Torre) can end up seeming as much tragic victim as thuggish executioner. There is, almost inevitably, a US remake in the works, to be directed by Baltasar Kormákur – but that is unlikely to feature a prison that looks like a crowded slum marketplace. 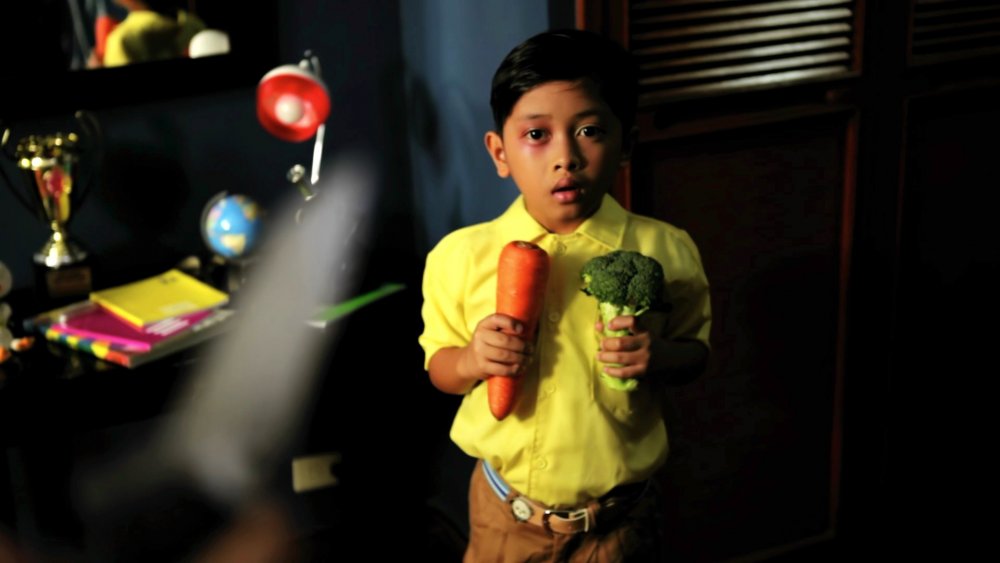 Superficially similar, the plot of Nathan Adolfson’s A Thief, A Kid and a Killer (2014) is pure pulp. After a jewellery heist gone wrong, nice junky thief Nico (Felix Roco) and his not-so-nice junky cousin Lloyd (Jeffrey Quizan) take refuge in a luxury apartment from their double-crossing partners in crime (who are also corrupt police detectives) – only to discover they’re sharing this accommodation with a ten-year-old named Maximo (Arvy Cesar Viduya), whose own fortunes are set to take a significant turn.

Adolfson however keeps the pot boiling in overtly Tarantino-esque fashion (Reservoir Dogs being the key model) by imposing a complicated chronological structure on a story told in arrestingly over-saturated imagery, vibrant handheld camerawork and jumpy editing. Unfortunately he also adopts Tarantino’s habit of overwriting every scene, so that the final product feels a good half an hour longer than this sort of material can properly bear.

There are similar problems in Veronica Velasco’s Tuhog (2013), named after the Tagalog word for a ‘string of beads’ or kebab-like ‘skewer’. After an attention-grabbing, high-concept opening in which a bus accident leaves three individuals impaled together on the same pole, the film adopts a rigorous, tripartite structure to tell the trio’s different back stories.

What unifies this triptych are recurring motifs (hospital visits, the appearance of a mystic beggar boy), occasional narrative intersections (unnoticed by the characters), and the bizarre titular plot device that artificially forces these three together into collision. Alas, all the stories are told with something less than economy, while Tonio’s and Caloy’s already rather light stories seem all the more disposable when pinned to the gravity of Fiesta’s tragedy. 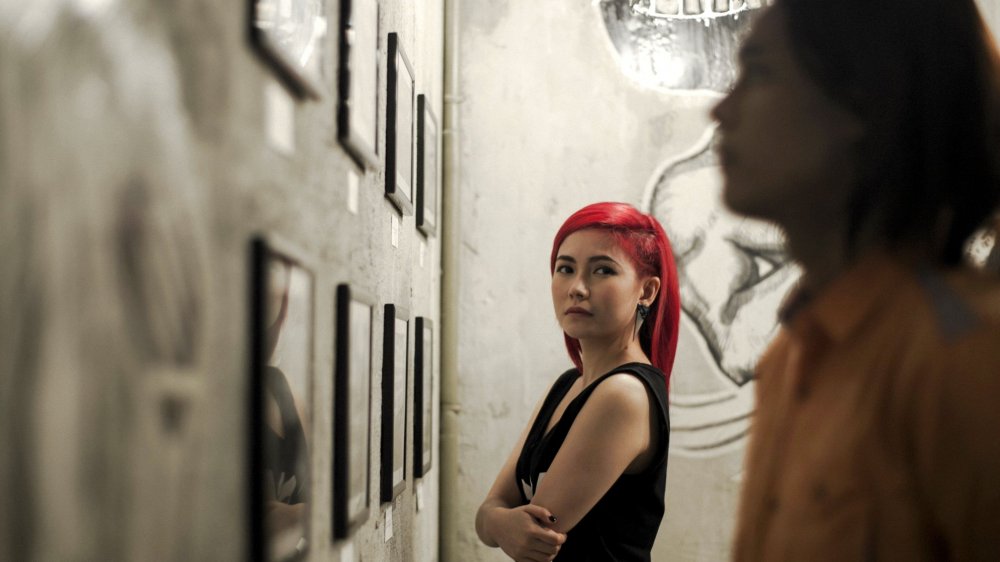 “I don’t know what I want to do, I have so many goals” says Estela (Yeng Constantino) in Siege Ledesma’s Shift (2013). “I want to be a super songwriter, I want to own an artsy-fartsy cafe bar, win a national art award, be a photo journalist. I’m only here so I can fund my impractical dreams and eventually move out.”

‘Here’ is the call centre where Estela does shift work with a group of other graduates, all qualified merely by their ability to speak fluent English. Like Tuhog, Shift is preoccupied with characters stuck between their pasts and their futures – but it is also brisk and breezy, and feels as though it actually has something new to say about the lives of educated twentysomethings in modern Manila.

Ledesma’s decision to show multiple, simultaneous text message threads on screen, some continued, others ignored, is an economic and graphically effective new way of depicting exactly where a character’s immediate priorities lie, often to the detriment of future opportunity. With its protagonist unwilling, if not quite unable, to shift from her stasis, this is coming-of-age that never arrives, leaving the viewer aptly on hold. 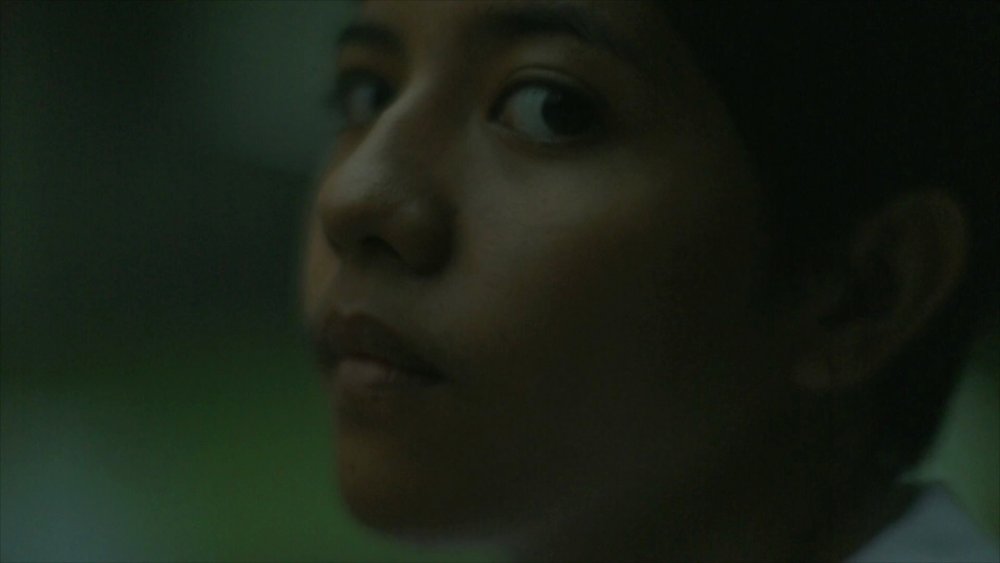 How to Disappear Completely (2013)

The most elusive and abstract film in the Philippines strand is also my favourite. Raya Martin’s How To Disappear Completely (2013) begins with a man, shown in frightened close-up, being terrorised by a short-haired girl (Ness Roque). As his nose begins mysteriously to bleed, she says, “I want to kill. I want to kill you. I want to kill all of you,” adding, “I want to kill my feelings.”

In answer to his question “Why?”, there is a flashback to her stifling home life on ‘The Islands’ a year earlier. The girl’s devoutly religious mother (Shamaine Buencamino) warns her of an old woman’s ghost that wanders about at night in search of a daughter lost to a tsunami, and also tells stories of young girls willingly engaging in incestuous acts with their father. Meanwhile the girl’s own father drinks heavily, rears a fighting cock (which he regales with fanciful stories of its regal, human origins) and visits his daughter’s bedroom at night.

Clearly something has to give – but in this strange, menacing story of legacies (and stories), it remains unclear whether the girl and other young people on the island have gone mad, been supernaturally possessed or just absorbed the buzzing psychic wash all around – nor, indeed, whether they are rebelling against the values of the previous generation or are merely re-enacting and perpetuating them. Shot wide, and made to resound to a throbbing electro pulse by London-based Filipino musician Eyedress, How To Disappear Completely is a haunting, apocalyptic vision that hypnotises the viewer (chicken-like?) into a trance state while establishing an almost tangible sense of approaching dread. 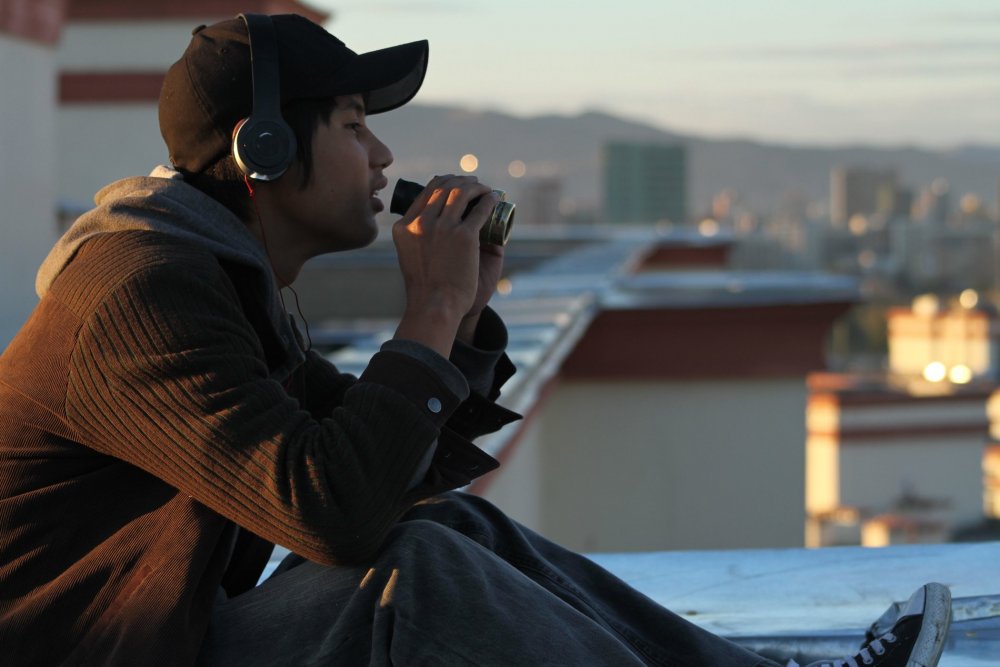 Besides Terracotta’s Spotlight on the Philippines strand, there is also an excellent film from Mongolia, Byamba Sakhya’s Remote Control (2013). Tsog (Baasandorj Enkhtaivan), a dreamy teenaged runaway with an artistic bent and an obsession with flight, camps out in Ulaanbaatar on a high-rise rooftop where he watches from afar the pretty acrophobic woman (Bayarmaa Nergui) who lives in the penthouse opposite. In love, and desperate to bridge the vast gulf, physical, social and economic, between them, Tsog purchases a remote control to change the channels on her television from his aerial home, and also anonymously gifts her one of his drawings of flight – but his ‘divine’ interventions from on high have unintended consequences.

Part Buddhist parable, part social-realist drama, Remote Control exposes both the divides and the invisible interconnectedness in a nation undergoing rapid modernisation. It also boasts the sort of breathtakingly beautiful widescreen cinematography that deserves to be seen on a big screen – which may only be possible for UK residents at the Terracotta Far East Film Festival.