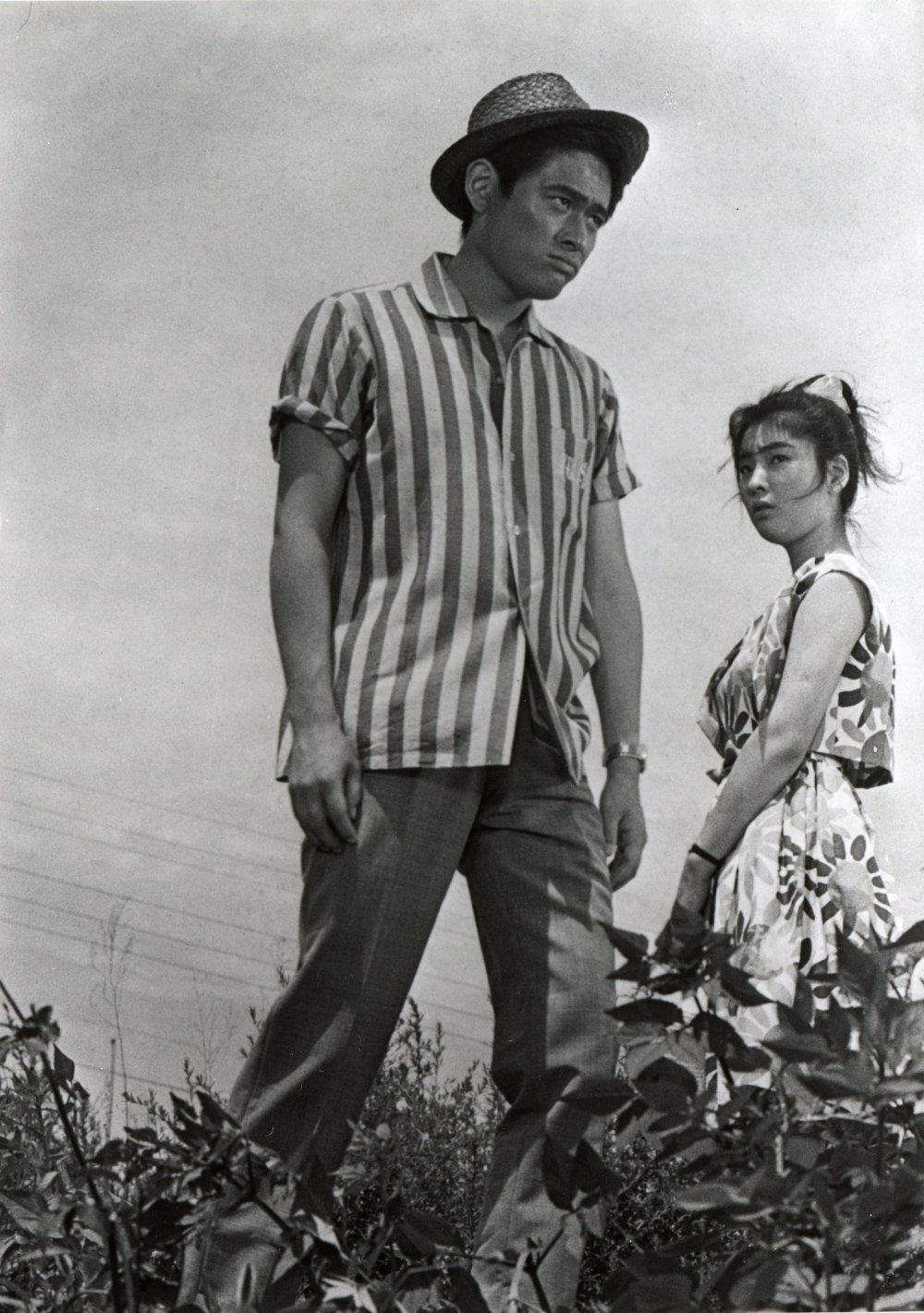 We all either are, or once were, young. Accordingly, youth has formed a perennial theme in cinema, inviting identification from younger viewers, nostalgia (and sometimes anxiety) from those older while also, at times, proving irresistible as a narrative vehicle for broader transitions in society, as well as being a vital embodiment of innovations in filmmaking itself.

This is certainly true of Japanese cinema, where several seishun eiga, or ‘youth films’, can be found, for instance amongst Ozu Yasujirô’s earliest silents – although the genre really came into its own in the postwar years, when a new generation, dubbed taiyozoku (‘sun tribe’), sought to escape the twin shackles of outdated domestic values and American occupation. In the mid 1950s the Nikkatsu and Daiei studios released a string of controversy-baiting films (also known loosely as taiyozoku) that reflected this mood of youthful disaffection. Influenced by the rebelliousness of Blackboard Jungle (1955) and Rebel Without a Cause (1955), the taiyozoku films were mostly made by directors who were themselves young, and would break free not merely from contemporary societal norms but also from the traditions of classical filmmaking, paving the way for the Japanese ‘New Wave’ of the 60s (wherein seishun eiga would continue to flourish).

The modernity towards which Japan was then awkwardly groping its way has long since grown into a reality – but even if the Japan Foundation’s programme of seishun eiga currently touring the UK features just one title that predates the 2000s – Yoshida Yoshishige’s rarely seen 18 Who Cause a Storm (Arashi o yobu juhachi-nin, 1963) – nonetheless the genre’s history continues to exert an influence, albeit adapted to a different age. 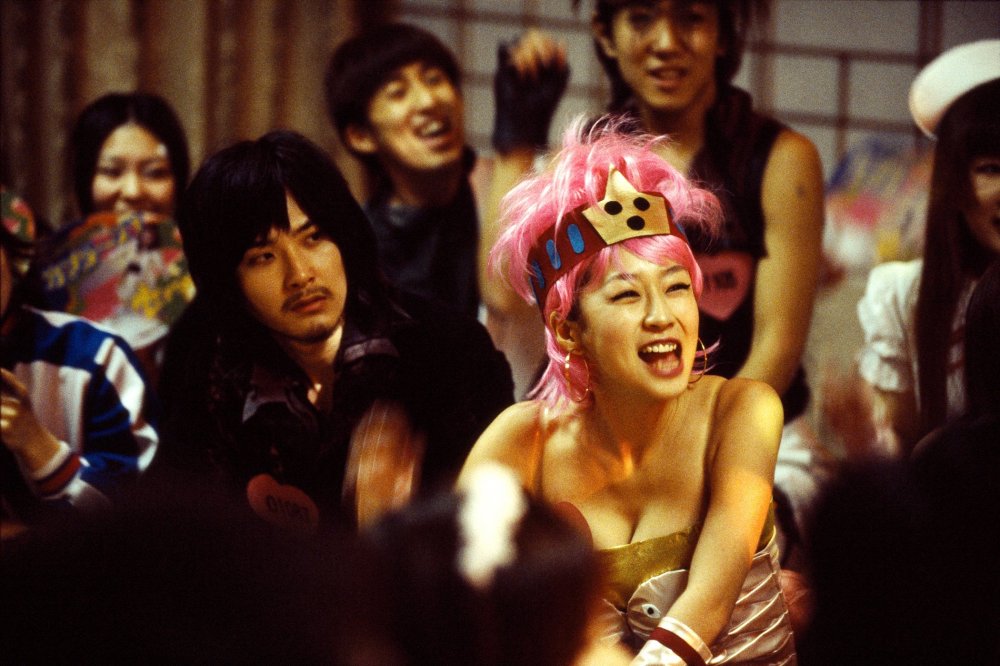 One suspects, for example, that if Nakahira Ko had not so frankly expressed sexual yearning with a notorious shot of his hero’s bulging pants in the seminal taiyozoku Crazed Fruit (Kurutta Kajitsu, 1956), there would be little room for the similar shots in Matsuo Suzuki’s Otakus in Love (Koi no Mon, 2004) and Ohne Hitoshi’s Love Strikes! (Moteki, 2011) – or indeed for the opening sequence of Togashi Shin’s Sorry (Gomen, 2002), in which bewildered 12-year-old Sei (Hisano Masahiro) has both an erection and his first (spontaneous) ejaculation while reading aloud in front of his classmates.

In these films, the body is (as ever) a factory of desire that runs according to its own settings, while love must be negotiated through a developing unionisation of body and brain; but the specific subcultures to which Matsuo’s and Ohne’s characters belong are entirely of their own time. Matsuo’s otaku lovers are into manga and cosplay and struggle as much with their artistic expression as with their hormonal imperatives, while the “31-year-old virgin” music-blogging hero of (sub-par) romcom Love Strikes! emblematises the arrested development of post-millennial geekdom. Conversely, Sorry’s sweet-natured focus on pubescence (with its central metaphor of a bicycle careering downhill without brakes) would be out of place and time in the late-adolescence-obsessed 50s. 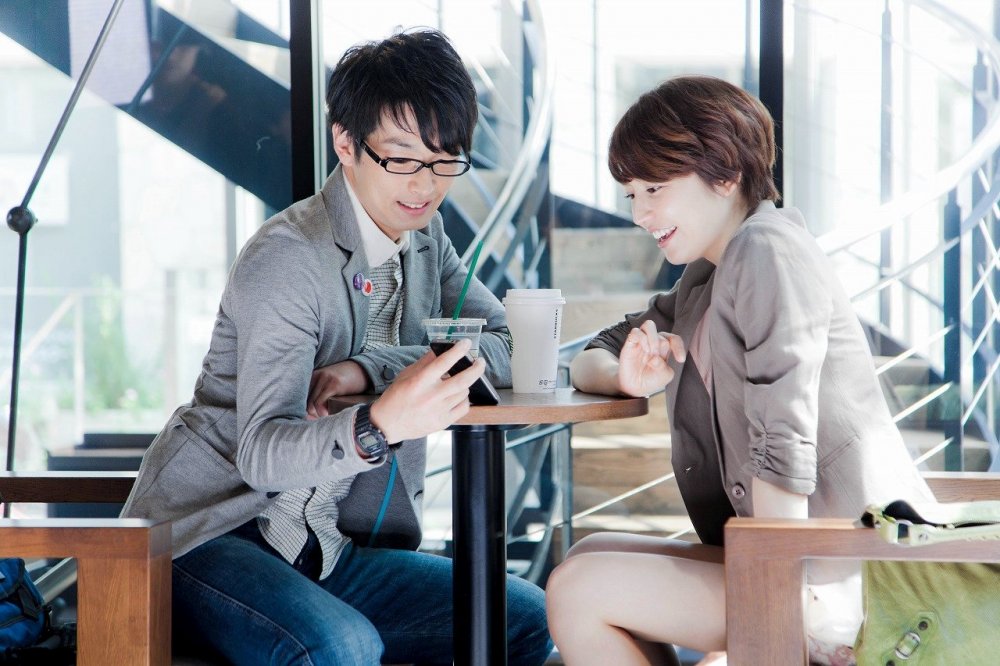 Other films in the programme inherit and update the youthful nihilism and anomie that typified the taiyozoku of the 50s. This appears in perhaps its purest form in Yukisada Isao’s troubling existential drama Parade (Paredo, 2010), in which five young flatmates spy on each other and their neighbours while choosing to overlook the repressed trauma and combustible affectlessness in their midst.

Just as dispiriting is Yamashita Nobuhiro’s 80s-set The Drudgery Train (Kueki ressha, 2012), about a feckless 19-year-old day labourer whose difficult past, low self-esteem and toxic personality have seemingly condemned him to a life of unending poverty, alcoholism and sexual/social exclusion. Played fearlessly by Moriyama Mirai, Kanta is his own worst enemy, repeatedly trampling all over his few friends and demolishing every opportunity that comes his way – but in a film that plays as a bubble-era Factotum (2005), a way out of the grind might just be offered by art itself. 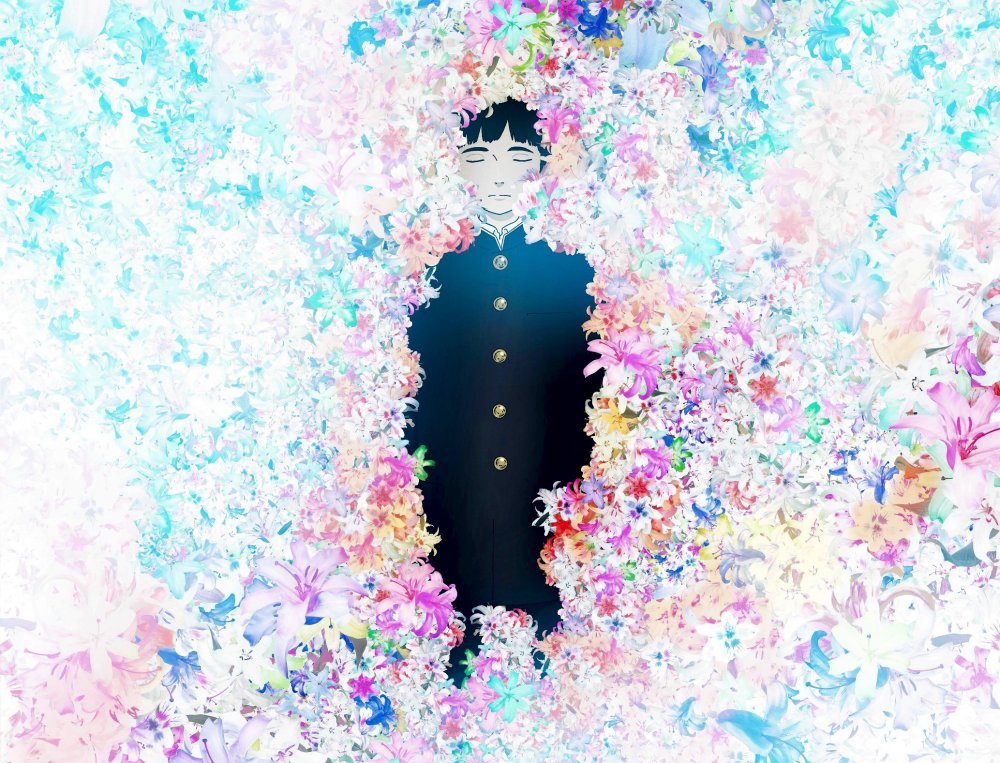 Likewise in Hara Keiichi’s anime Colorful (Karafuru, 2010) the protagonist’s (interrupted) interest in art, as well as stunning art direction, brighten some otherwise very dark themes (chiefly teenage alienation and despair) – although the use of a supernatural Capra-esque conceit (a sinful soul offered the chance to redeem itself in the body of a teen suicide) eventually becomes a frustrating distraction in a film whose duration outdistances its ideas.

Koji Hagiuda’s Wonder Child (Shindo, 2007), about a reluctant piano prodigy struggling with more than mere musical talent as her genetic legacy, is similarly overblown and melodramatic, with star Narumi Rimo, though accomplished, never convincing as a 13-year-old. 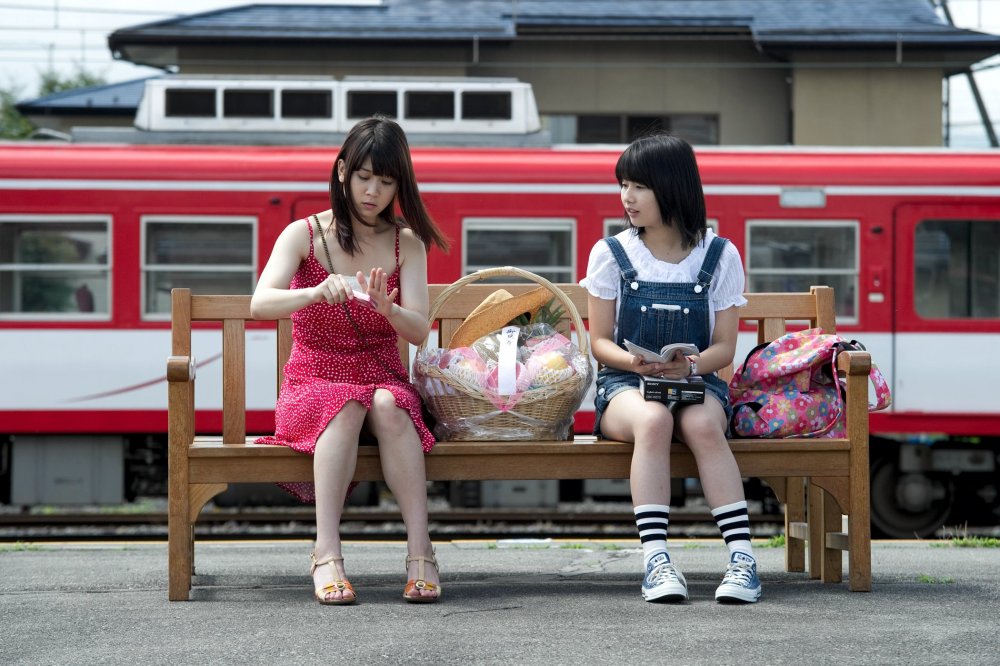 Two other programmed films about young teens are better. Using photographs of clouds as a visual metaphor for the ephemerality of youth, Hiroki Ryuichi’s achingly elegiac Your Friends (Kimi no tomodachi, 2008) uses an episodic flashback structure to expose the sense of loss built into childhood friendships. In Nakano Ryota’s Capturing Dad (Chichi o tori ni, 2012), meanwhile, the journey of two teenage sisters to photograph an estranged father they barely remember enables them to recognise and understand better their own identity, and reconnect with family old and new. It’s a well-observed piece of naturalism which takes, in its final scene, an unexpected but satisfying leap into the irrational.

Best of all though is Okita Shuichi’s sprawling epic of ordinariness The Story of Yonosuke (Yokomichi Yonosuke, 2012), in which an average-seeming, happy-go-lucky young man named Yomokichi Yonosuke (Kora Kengo in endearingly funny form) arrives from the provinces for a business studies course in a Tokyo university. 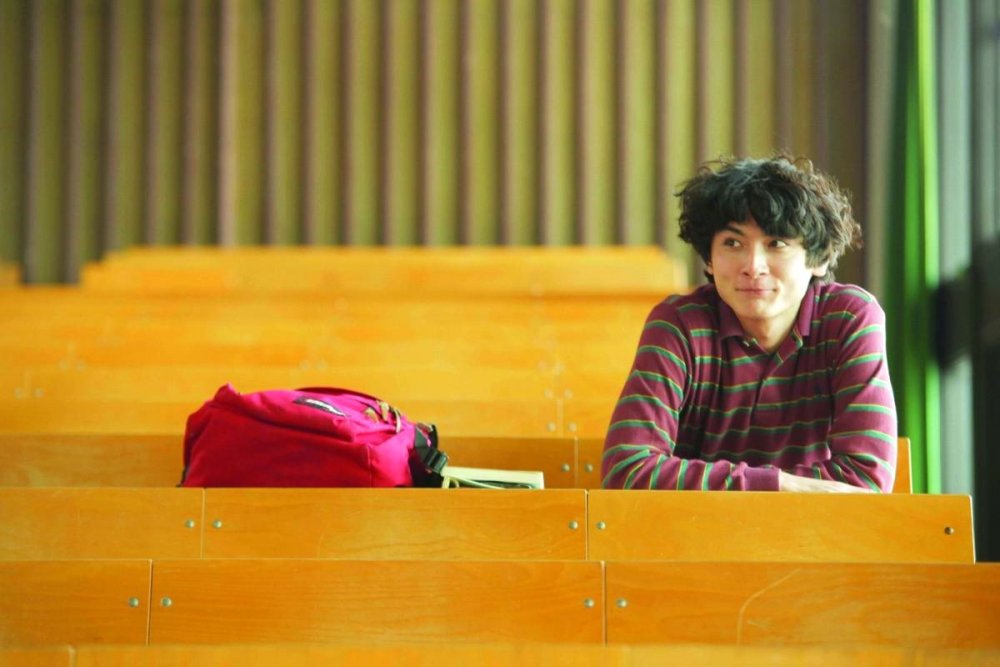 The Story of Yonosuke (Yokomichi Yonosuke, 2012)

Drawn from Okita’s own novel, and set in the late 80s, the film traces Yonosuke’s bumbling – if always good-natured – rites of passage as he gradually finds friendship, love and a stronger sense of self, not to mention a deep passion for samba – and, eventually, his true métier in photography. Yonosuke is that rare thing, a straightforwardly decent protagonist, and if he seems at times – much like the photographs that he leaves behind – sketchy, amateurish and not entirely in focus, he also develops into a fuller person, while leaving a small but lasting impression on all those whom he encounters.

This becomes clear in the occasional flashes forward to the 2000s – scenes which prevent the film disappearing into its own quirks by adumbrating a far weightier preoccupation with time, memory and mortality. Here youth casts a long shadow, even as its absurdist comedy mellows with time into something richly bittersweet. Viewers caught up in the shifting tempos of this film’s energetic dance will feel their own initial smiles maturing into a far more complex emotional response as youthful innocence, though never quite lost, yields to experience.