Nell Shipman: an auteur in the wild

In the frame shots bracketing her 1920 western-with-an-automobile Something New, the silent-film pioneer wrote her own claims to cinematic authorship directly into the movie – decades before men coined the auteur theory.

The opening credits begin with a card reading “F. H. Croghan Presents Nell Shipman in ‘Something New’”, followed by another declaring this to be “A Nell Shipman Production”, then one more informing us that the film we are about to see has been “Written and Directed by Nell Shipman and Bert Van Tuyle”.

Nell Shipman’s Something New (1920) and Back to God’s Country (1919) are available on Kino Lorber’s Pioneers: First Women Filmmakers Blu-ray box-set.

The opening image shows a woman sitting under a tree. The decor, which includes Navajo rugs, a tent and a holstered gun, suggests that most masculine of genres, the western. The woman, positioned behind a table containing a typewriter, is staring into the distance. After a few seconds of silent contemplation, she begins typing, but breaks off almost immediately, glances miserably at the page before her, and places her elbows on the table, arranging her hands on either side of her head in a manner indicating frustration.

The first intertitle appears at this point:

“A Lady in search of an Inspiration.
…Nell Shipman.”

This is followed by a close-up of Shipman, her hands still alongside her head. “One of those muddy mental hills with the old brain hitting on one cylinder,” reads the accompanying intertitle.

The next shot has Shipman pulling the paper out of her typewriter and tearing it into pieces. Her thoughts are revealed by another intertitle:

“ ‘There is nothing new under the sun!’”

Shipman now notices two men – one on horseback (“The Old –”), the other driving a car (“– and the New.”) – challenging each other to a race. Inspired by this event, Shipman inserts a fresh sheet into her typewriter and starts pounding the keys enthusiastically.

Films of the silent era directed by women have become the focus of much cinephile attention lately: Blu-ray box sets from Kino Lorber (Pioneers: First Women Filmmakers) and Flicker Alley (Early Women Filmmakers: An International Anthology) have been released in recent months (both were reviewed by Pamela Hutchinson in the March 2019 issue of Sight & Sound), and the BFI’s Early Women Filmmakers 1911-1940 is forthcoming. And the output of Canadian director/actress Nell Shipman has finally been receiving the attention it deserves (for an account of Shipman’s importance as a pioneer, see Hutchinson’s Primal Screen piece in the January 2017 S&S). Something New (1920), included in Kino Lorber’s collection, is perhaps the most fascinating of Shipman’s surviving works, both for its artistic achievements and for what it has to say about the figure of the author.

Questions involving authorship are raised by the narrative that follows the sequence described above. Shipman is here cast as a young American who joins her father’s mining partner Sid Bickley (L.M. Wells) in Mexico, where she is kidnapped by bandits and has to be rescued by Bill Baxter (Van Tuyle), who escapes from the horse-riding villains in a motor car which he, and eventually Shipman, drives with tremendous skill. Shipman is described by Bickley as “a Writing Woman” who “craves ATMOSPHERE, real, red and RAW”, and her initial appearance in Something New’s fictional section is heralded by an intertitle reading “The Writing Lady… Herself… Nell Shipman”.

One possible answer to these questions is suggested by Shipman’s The Grub Stake – A Tale of the Klondike (1923), whose opening title reads “Bert Van Tuyle presents Nell Shipman in The Grub-Stake”, followed by a card informing us that the film has been “Written by Miss Shipman” and “Directed by Bert Van Tuyle in collaboration with the author”. That last phrase might rankle adherents of the auteur theory, since it clearly refers back to the “Written by Miss Shipman” credit, situating Shipman’s oeuvre firmly within an era in which writers (whether screenwriters or the creators of source texts) were considered to be more or less the ‘authors’ of motion pictures. But what does it mean to ‘write’ something that consists primarily of images?

Something New and The Grub-Stake both emphasise the gap between Shipman’s dynamic persona and those expectations of passivity that seem ‘natural’ to her gender. The earlier film sets up an explicit opposition between the kind of individual a ‘Writing Lady’ is expected to be (“a skinny Dame, with specs”), and the vitality which animates Shipman’s every movement. Similarly, The Grub Stake introduces Shipman as an object for the look (she is first seen posing for students in an art class) before transforming her into an active heroine who, in a milieu defined by masculine oppression, takes effective action against male brutality. 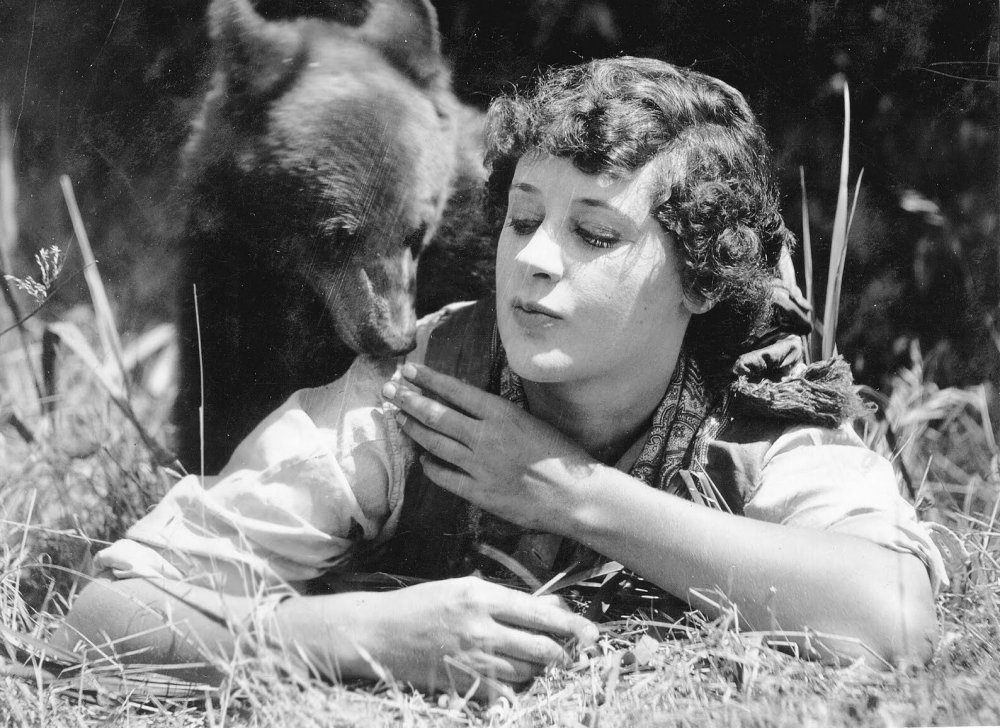 ‘Directed… in collaboration with the author’: The Grub Stake – A Tale of the Klondike (1923)

The Shipman heroine’s assertion of agency is often imbricated with her connection to the natural world, and if woman’s affinity with nature traditionally confirms her as intuitive rather than rational, Shipman uses this motif to portray women existing outside of, and even in fundamental opposition to, the ‘rational’ sphere of patriarchal capitalism; The Grub-Stake’s protagonist even denounces the supreme patriarch, shouting “I hate you” at God himself.

And while strict auteurists might insist that credited co-director Bert Van Tuyle be considered Shipman’s creative equal, the films will have none of this. Indeed, Something New’s prologue only makes sense once we grasp that Shipman’s typewriter is metaphorical, and that what she can be seen ‘writing’ is not a novel, a short story or even a screenplay, but rather the film itself.

Something New ends by returning to Shipman under the tree, now typing so frantically that she knocks her typewriter off the table. She is last seen staring into the camera, laughing happily. These concluding images are interspersed with three intertitles:

“THERE IS ALWAYS SOMETHING NEW!”

The meaning seems completely unambiguous: the ‘something new’ being proffered here is the idea that a film can be created by a single person, namely the ‘maid’ Nell Shipman.

The ‘politique des auteurs’ formulated by contributors to Cahiers du Cinema during the 1950s has recently become the target of accusations that those directors singled out for close analysis were predominantly male, leading Girish Shambu to dismiss auteurism as “a manspreading machine”. But filmmakers can think just as clearly as theorists, and what Nell Shipman proposed in 1920 was precisely that notion of authorship supposedly invented decades later by Truffaut and Godard.

Given the links Shipman makes between her brand of directorial control and a rejection of masculine assumptions (about what a film should be, what an author should be, what a woman should be), it may be necessary to rewrite cinematic history, repositioning ‘female authorship’ not as a special category, but rather the original state from which our ideas regarding the auteur have descended.

Related to Nell Shipman: an auteur in the wild