Real men don’t read? In a Lonely Place and the self-loathing screenwriter

In Nicholas Ray’s classic film noir, Bogie plays a writer with an aversion to opening a book. Is this the reductio ad absurdum of macho masculinity? 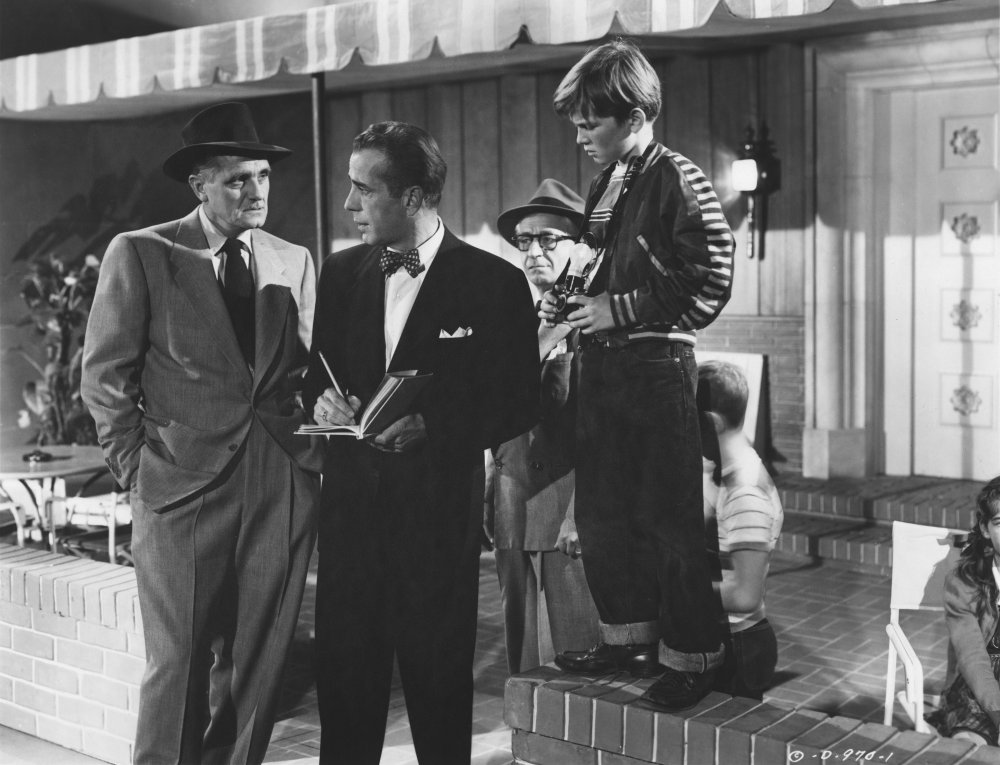 Humphrey Bogart as Dixon Steele in In a Lonely Place

Near the beginning of Nicholas Ray’s In a Lonely Place (1950), Dixon Steele, the short-tempered screenwriter played by Humphrey Bogart, encounters Frances Randolph (Alix Talton), one of his ex-lovers, in a Hollywood restaurant called Paul’s. Frances proposes that Dixon spend the night with her, but Dixon declines, insisting he has to read a book. “Remember how I used to read to you?” asks Frances, to which Dixon responds: “Since then I have learned to read by myself.”

Two things are worth noting about this exchange. The first is that reading has here become a euphemism for sexual activity, the precise nature of which is necessarily vague. The second is that, in a film noir whose protagonist is consistently shown to be unreliable, this is perhaps the most misleading of Dixon’s many misleading statements.

The book Dixon must read is Althea Bruce, a popular novel he has been given the opportunity of adapting for the screen. And while Dixon may well have learned to read by himself, he has no intention of doing so this particular evening. Upon discovering that Paul’s hat-check girl, Mildred Atkinson (Martha Stewart), has been reading Althea Bruce, Dixon invites her to come home with him so she can summarise the novel. 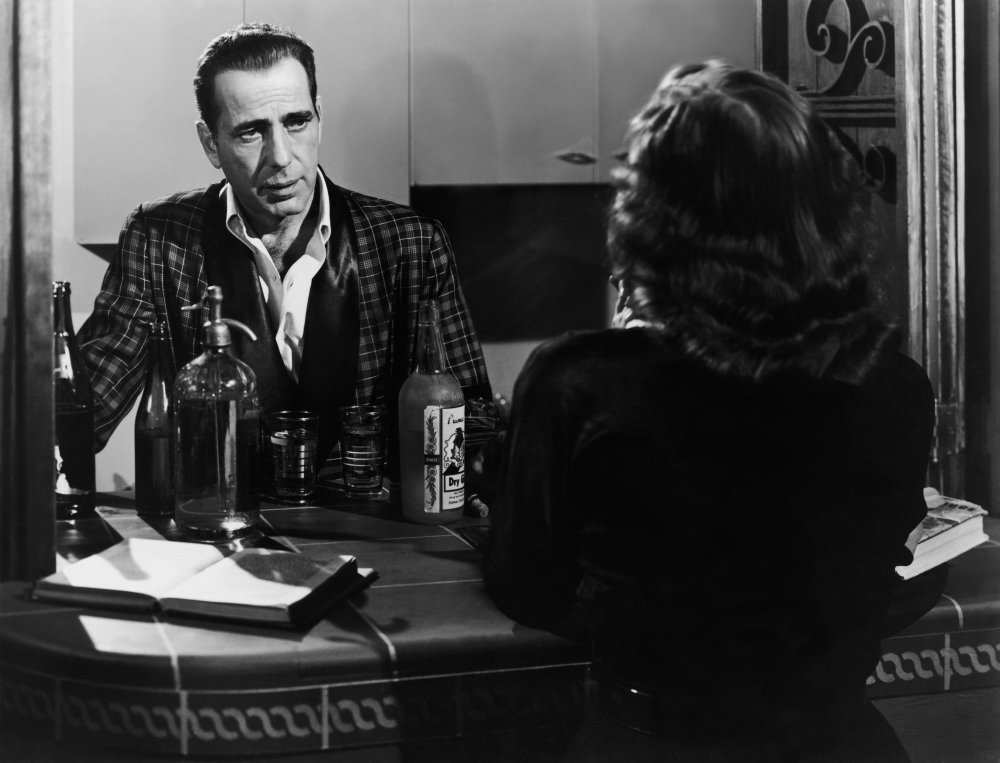 Steele’s motivations, here as elsewhere, remain obscure, both to us and himself. Does he, as the earlier imbrication of reading with sexual intercourse suggests, view this invitation as simply a way of securing female companionship? Does he genuinely want Mildred to summarise Althea Bruce? Or does he hope to combine both activities, mixing business (of a rather peculiar sort) with pleasure?

The incoherence of Dixon’s behaviour can be traced to his aggressive masculinity, a masculinity obliged to define itself within a predominantly feminine milieu. Hollywood is a place of make-believe rather than authenticity, and if Dixon’s attempts to assert male arrogance are marked by failure and desperation, this is because they lack a meaningful context.

That this superficially confident individual actually feels emasculated is evident throughout, but particularly during Mildred’s visit to his apartment. Dixon’s insistence on changing into a bathrobe (shades of Harvey Weinstein) is as ambiguous as his other actions; he would appear to be less preparing for a seduction than ostentatiously reminding Mildred (and himself) that seduction is a real possibility, a decision it is his (rather than hers) to make. 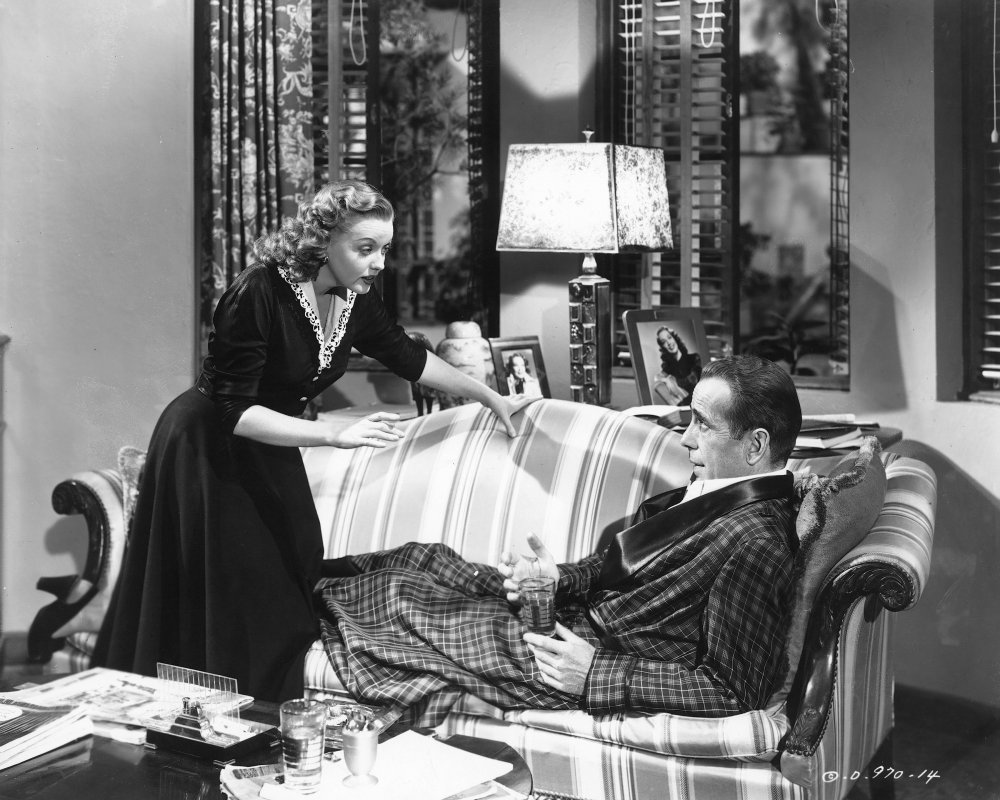 Mildred sits down as she begins relating the story of Althea Bruce, allowing Dixon, who is standing behind a bar, to loom over her. When Mildred imitates a character in the novel shouting for help, Dixon, fearing fantasy is becoming too closely linked with reality (for one of the roles he’s playing is that of cold-hearted roué seducing innocent maiden), sounds a note of caution: “Honey, I have neighbours.”

As Mildred’s narration comes to an end, Dixon sits in a chair and lights a cigarette while Mildred positions herself on the edge of his desk; the resulting composition shows her looming over him, precisely reversing their original positions. It is this loss of control that causes Dixon to abandon any carnal plans he may have been hatching, and send Mildred on her way as quickly as possible (“It’s late and I’m tired and I have to get up early in the morning”), thus setting the main plot of Ray’s film in motion. For Mildred will soon be killed, and Dixon fall under suspicion of having committed the murder.

Dixon’s undisguised contempt for Mildred’s lowbrow taste in literature anticipates Ed Avery (James Mason)’s disdain for the western his son watches on television in Ray’s Bigger than Life (1956). Yet Mildred, who is introduced absorbed in Althea Bruce, will be the only character seen reading for pleasure. 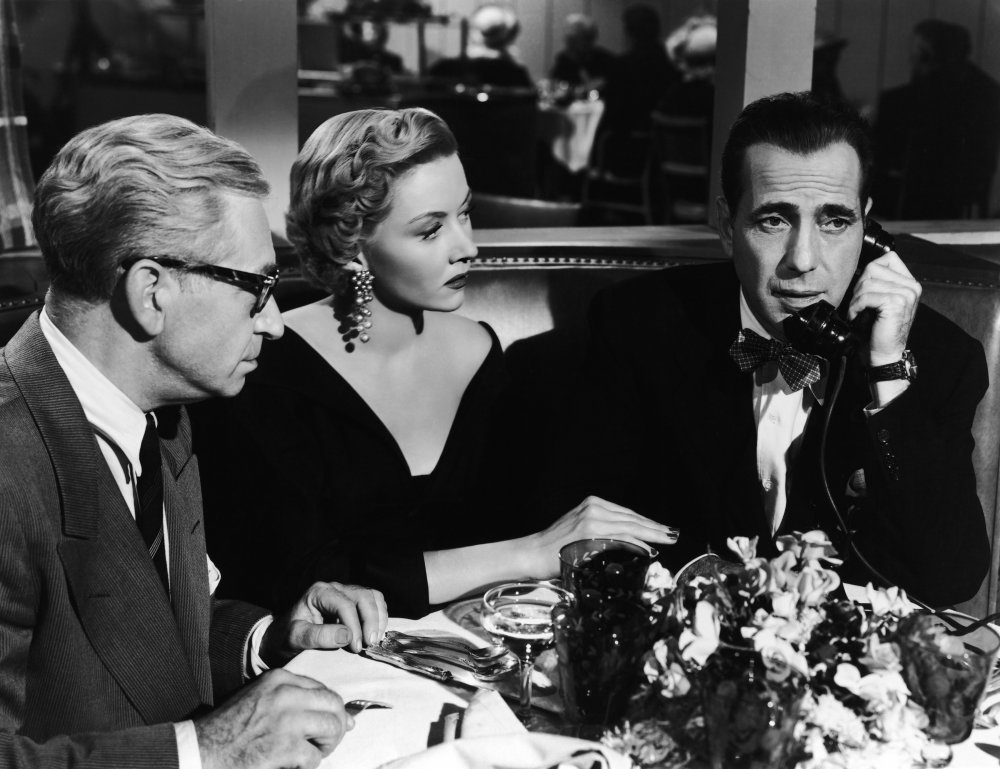 Indeed, she is close to being the only character who reads at all. Sergeant Brub Nicolai (Frank Lovejoy) looks briefly at the opening page of Althea Bruce; Captain Lochner (Carl Benton Reid) peruses some documents while dictating a report on Dixon; and Dixon’s agent Mel Lippman (Art Smith) skims his client’s screenplay, though he seems less interested in its contents than its page count.

When Dixon turns up at police headquarters and is obliged to wait, he never so much as glances at the newspaper in his hand, instead studying a notice board which must be completely irrelevant to him. And while Dixon has a bookcase, it would appear to exist primarily for display purposes. In this it resembles the bookshelves in Lochner’s office, but stands in marked contrast to those in Laurel Gray (Gloria Grahame)’s apartment.

The one book we know Dixon possesses (aside from Althea Bruce) is a casting directory, and when he wants to see if Laurel is listed in it, he deputises the task to Mel. Dixon can’t even bring himself to look up Mildred’s address when he decides to send her flowers (after her death!), instead asking the florist to do it for him.

Nor does his encounter with Mildred mark the only time Dixon requires the services of a reader. After Mildred’s boyfriend Kesler (Jack Reynolds) finally confesses to her murder, Brub points out to Lochner how important it is that this information be conveyed to Dixon immediately, asking “Do you mind if I read Kesler’s confession to him?” And alcoholic ex-actor Charlie Waterman (Robert Warwick) helps Dixon fall asleep by reciting Shakespeare’s 29th sonnet.

Dixon, it seems, regards becoming a child read to by a father-figure as less emasculating than being caught doing something as unmanly as reading. This attitude is clarified during the scene in which Dixon, Laurel, Brub and Brub’s wife Sylvia (Jeff Donnell) relax on the beach.

Discussing how supportive Laurel has been, Dixon says, “You know what she says to me when I show her something I’ve written? ‘Honey, haven’t I read this somewheres before?’” While quoting Laurel, Dixon adopts an affected voice and places both hands on his chest, as if to suggest the presence of breasts. The implication is that reading must be an inherently feminine activity, and there is clearly a connection here with Bogart’s imitation of a gay bibliophile in the bookshop scene of Howard Hawks’ The Big Sleep (1946), where an interest in books is also bracketed with homosexuality. 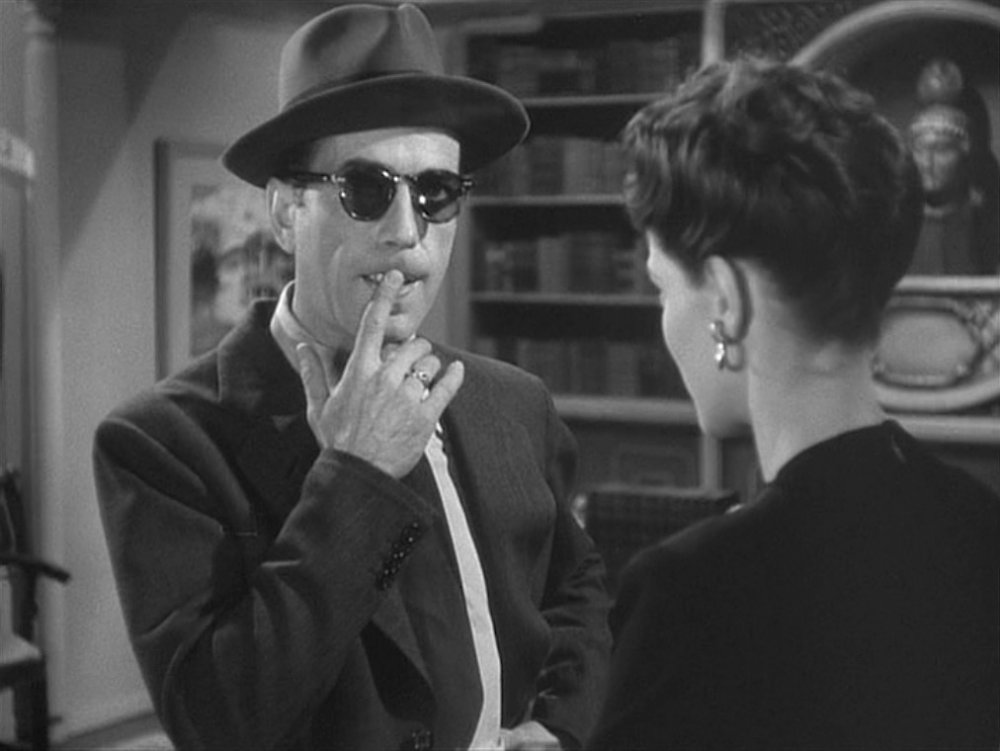 This perhaps explains both the relentlessness with which Dixon seeks out situations wherein he can prove his virility, and the self-loathing he feels when regarding his chosen profession (virtually the first thing we learn about him is that he makes it a point never to see the pictures he writes). As so often in his work, Ray delivers a scathing critique of an ideology which defines the perfect male (the writer) as an adventurer taming a savage wilderness, and his ideal partner, the perfect female (the reader), as a home-maker belonging exclusively to the domestic sphere.

The impossibility of two such ill-matched individuals coming together without abandoning their gender roles is a dilemma frequently tackled by classical Hollywood, and it is appropriate that In a Lonely Place, among the greatest examples of a genre focused on nightmare visions of masculinity, should start out privileging a male viewpoint (Dixon), and end up privileging a female one (Laurel), thus neatly positioning itself midway between the concerns of western and melodrama.

Related to Real men don’t read? In a Lonely Place and the self-loathing screenwriter