As a corrective to the stereotype of women in silent cinema as invariably passive and helpless, Falkirk’s go-get Hippodrome Silent Film Festival this year showcased an international spectrum of female protagonists young and old, from the heroine of the earliest surviving wuxia film to Pola Negri’s Tsarina Catherine. 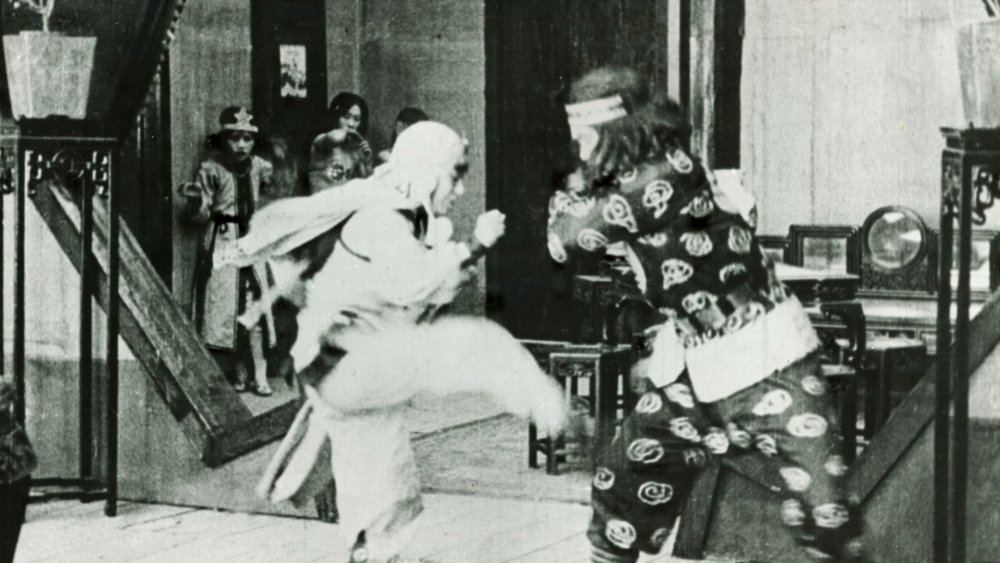 Laila will tour Scotland with Marit Fält and Rona Wilkie’s new Hippfest-commissioned score and is available on DVD (Region 1) and VoD from Flicker Alley.

Hindle Wakes is available on DVD (Region 1) from Milestone.

Of all the assumptions made about silent cinema by those who haven’t had the pleasure of seeing much of it, the trope of a ‘damsel in distress’ is the hardest to shift. It remains a popular misconception that when women in silent films aren’t swooning on to couches or beating their breast with both fists, they are bound and tied to the train tracks, waiting for a noble, masculine, rescuer. It’s not a trap that the visitors to Hippfest 2019 will fall into, as Scotland’s only silent film festival showcased a range of female-led films featuring spectacularly diverse heroines.

Most eye-catching of all was the high-flying star of Chinese silent The Red Heroine (1929), shown at the festival in conjunction with the Confucius Institute for Scotland. This, the earliest extant example of a wuxia film (in fact it’s the only surviving section of a 13-part serial, but stands alone as a self-contained feature), tells a-now familiar revenge tale.

Fan Xuepeng plays a young girl whose family is wronged by vicious warlords, so she takes time out to acquire some lethal martial arts skills with an other-worldly master, before returning to extract her vengeance. Xuepeng herself, a captivating lead sadly absent from the screen for much of the duration, came up with the nifty idea of having her character dyed red with ink in prints of the film. Her contribution to the film’s special effects, while hugely popular with audiences, was never officially credited.

The heroine of Norwegian silent Laila (1929) was every bit as compelling if not so violent. This gorgeous epic, directed by Dane George Schnéevoigt, otherwise best known for being Carl Th. Dreyer’s occasional cinematographer, tells the story of a young girl born in Norway to Christian parents but adopted by a Sami family. As she grows older, and learns the truth of her heritage, she faces a struggle between cultures, and lovers.

Played by Swedish actress Mona Martenson, Laila is a charismatic, and very sympathetic female lead, supported by a cast of well-defined characters in a film that could be forgiven for resting on its sumptuous snowy landscapes and action scenes. The Hippfest screening was also enhanced by a fresh, folk-influenced and very effective score by Norwegian/Scottish duo Marit Fält and Rona Wilkie playing violin, fiddle, mandola and hardingfele.

There were plenty more spirited young women in the schedule, and two in particular who managed to wrong-foot the modern audience’s expectations with assertions of autonomy or ambition in the final reel. In Maurice Elvey’s hugely enjoyable 1927 adaptation of Stanley Houghton’s Hindle Wakes, American actress Estelle Brody takes on the role of millworker Fanny Hawthorne, a “Lancashire lass” who refuses to be intimidated by money, or moralising. She describes her one-time lover as a “little fancy” and relishes the economic independence brought by her labour above marriage: “So long as there are spinning mills in Lancashire I can earn enough to keep myself respectable.”

Dita Parlo’s role in Julien Duvivier’s kaleidoscopic late-silent Au Bonheur des Dames (1930) was a little more complex. Playing Denise, an orphaned country mouse who moves to Paris to stay with relatives and takes a job at a dazzling department store (the female paradise of the film’s title), Parlo convinces as young woman with not just the nous to resist a known roué’s advances, but a hidden capitalist impulse. The backdrop to Denise’s story, as in the Zola novel the film is based on, is the growth of the department store, a vast and dazzling emporium designed to overwhelm its female customers into making purchases. In the film, the shop is also shown to be part of sweeping changes altering the face of Paris, with new commercial buildings stretching upwards and across, demolishing small businesses such as the tiny, dusty shop belonging to Denise’s uncle, as they go.

There was a special poignancy to this theme, given that Au Bonheur des Dames was something of a last gasp of the silent form, a pot-pourri of 1920s cinematic artistry, including some especially vivid montage work – the talkies were just around the corner, wielding their own wrecking ball. This brand new restoration by Lobster Films, which premiered at the festival, revealed the film to be just as scintillating as the shop itself, and ripe for adoption into the silent canon.

Not every heroine at Hippfest was an ingénue. In Lois Weber’s The Blot (1921), the hard-up professor’s wife Mrs Griggs (played by former vaudeville star Margaret McWade) takes centre-stage from her pretty daughter played by Claire Windsor. The heart of Weber’s drama isn’t young Amelia’s choice of husband but her mother’s struggles to put food on the table, given her husband’s paltry wage. While Weber’s aim is social critique, MacWade provides psychological drama, in a series of visible struggles with her own moral code. 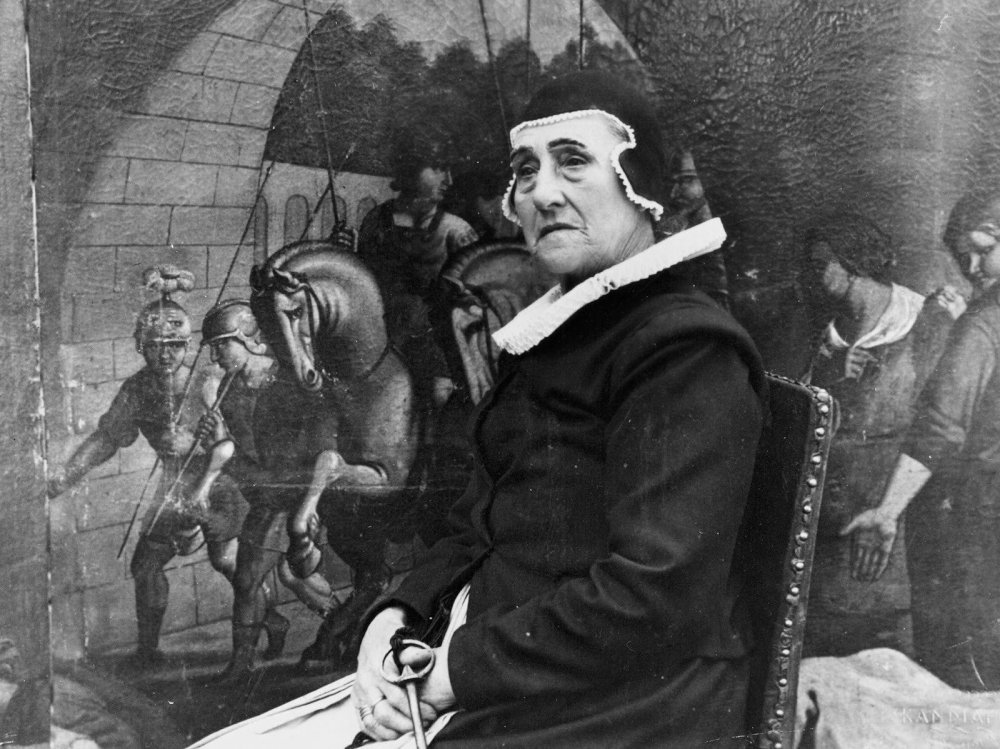 Hildur Calberg as Margarete Pedersdotter in The Parson’s Widow (aka The Fourth Marriage of Dame Margaret, 1920)

Mrs Griggs was far from the oldest heroine at Hippfest, though. That laurel surely goes to Dame Margarete (played by 76-year-old Hildur Carlberg) in Dreyer’s sublime 1920 tragicomedy The Parson’s Widow.

This film is inspired by both fact and legend. The premise is taken from a bizarrely pragmatic practice in certain rural communities in 17th-century Norway in which the newly appointed parson must marry his predecessor’s widow, to save the parish supporting two households. The mythical element is the folktale of an ancient woman entering her third century having seen off a succession of parson-husbands.

What could be an anti-feminist caper, with the older woman presented as a repulsive hag, in Dreyer’s hands becomes something tender and humane, as well as very funny. The new parson is briefly beguiled by the older women’s domestic virtues before setting himself the grim task of hastening her demise so he can marry his true sweetheart. Carlberg’s dignity throughout, and her sensitive playing of a crucial revelatory scene, are quite exquisite. Dreyer sadly recorded that she was ill during the shoot and died soon afterwards, before she could see her own great last performance. 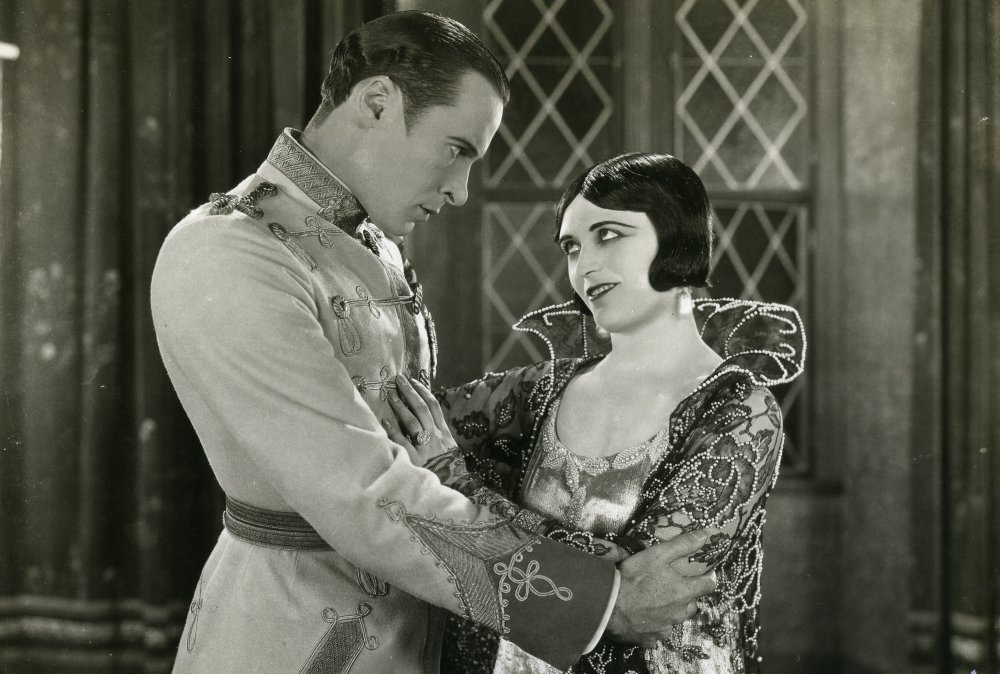 Friday night at Hippfest is traditionally the night when festival-goers dress up in 1920s finery to celebrate not just silent cinema but the luxe interior of the event venue, the Hippodrome cinema in Bo’ness, opened in 1912, but currently renovated to reflect its plush 1920s décor. And for the ninth edition of the festival, the glamorously attired guests filled the stalls and circular balcony to worship at the hem of a true silent diva.

The heroine of the gala screening was no less a screen goddess than Pola Negri, playing Catherine the Great in Ernst Lubitsch’s sizzing romcom Forbidden Paradise, recently lusciously restored by Moma New York. As the rapacious Czarina, Negri turns in a performance that is equal parts comedy, tragedy and carnality, with Rod la Rocque and Adolphe Menjou among the many men dancing attendance on her lustful whims. Catherine has hidden depths all right, but it wasn’t Czarina who held the audience rapt that evening, but Negri’s mercurial performance and Lubitsch’s equally magisterial direction.

While Hippfest may be a small festival, it continues to punch above its weight not just in terms of the prints it shows but in terms of the new musical work it produces. While it was a treat for the gala crowd to see such a joyous film, newly restored, extra praise should be reserved for Jane Gardner’s wickedly passionate score. It’s yet another of Hippfest director Alison Strauss’s impressive new musical commissions, and a sign that the festival does more than just boost historical representations of women on screen – it puts them at the heart of the work it is doing in the 21st century too.