In this issue: Gothic cinema from Universal to Hammer to Twilight – plus The Selfish Giant, Philomena, Captain Phillips and the peak of silent cinema. In print and digital from 4 October. 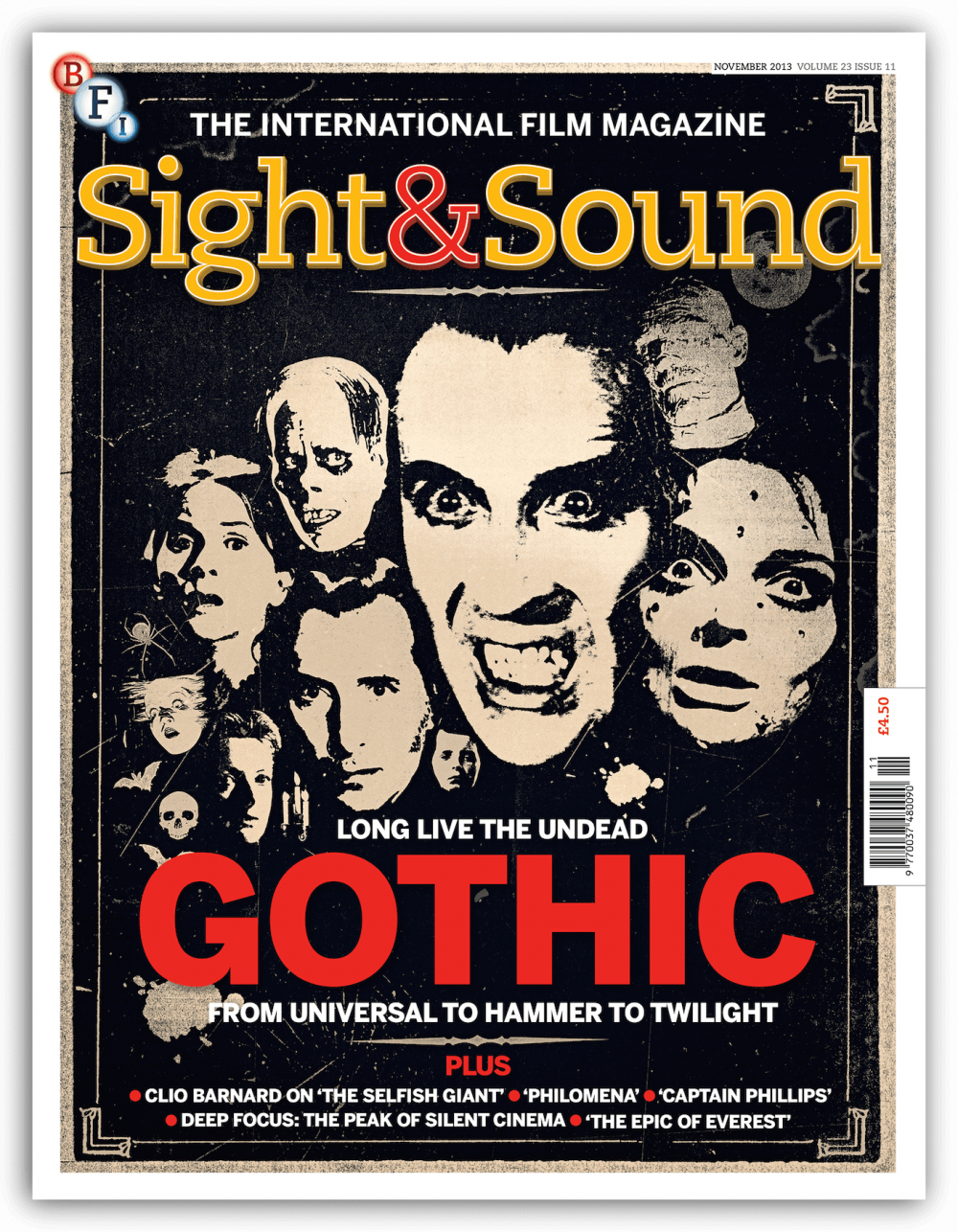 Welcome to the dark side, once again. As the BFI unveils a massive three-month blockbuster season devoted to all things Gothic, we follow last month’s Wicker feature with another issue luring us towards a world of lingering twilight shadows and dank mystery.

Rhidian Davis is our intrepid explorer of the deep-seated cultural roots of film’s abiding, anxious fixation on the uncanny and the undead, tracing the Gothic’s migration from the writings of Mary Shelley, Bram Stoker, Ann Radcliffe and others to the upstart medium of cinema, seemingly tailor-made for the purveyance of shivery thrills, where James Whale in particular became the driving force behind the establishment of mythic archetypes which also drew heavily on the occult Tarot.

“Frankenstein is the creation myth that underpins the cinema: an art of obsessive assembly, sparked into movement through the crackle of electricity,” avers Davis, pursuing the Gothic’s macabre incarnation in such iconographic symbols as the old dark house, the mummy and the woman in black into the realms of social history, linking them to imperial violence, guilt and fear of diminished standing and loss of power.

As an obvious adjunct, could there be a more entertaining or better informed guide to the profundities of the Gothic than Roger Corman, who produced several of the ‘inherently cinematic’ stories of Edgar Allen Poe and worked with those colossi of the Gothic imaginary, Vincent Price and Christopher Lee.

He talks to James Bell about his early fascination with Poe’s stories and his later struggles to adapt them. More than any other 19th century writer, Poe prefigured Freud’s more scientific explorations of the unconscious mind, “which is not aware of external reality – that’s the province of the conscious mind,” according to Corman. “So for the Poe films I thought I should stay away from reality and shoot everything inside a studio, where I could create my own effects, my own unreality.” He succeeded brilliantly, and will share further insights and anecdotes as one of the guests during the BFI’s Gothic celebrations this autumn.

In the decade before Whale was creating his gods and monsters at Universal, soldier and pioneering cinematographer John Noel was shooting his groundbreaking early documentary The Epic of Everest, restored and released by the BFI this month.

Wade Davis supplies the context to Noel’s epic and reveals the technical innovations he virtually invented to make it possible. In the wake of the First World War’s horrors, he writes, “the image of the noble mountaineer scaling to heights, climbing literally through a zone of death to reach the heavens, high above the sordid reality of the modern world, would first emerge from the imagination and through the lens of John Noel.”

It’s an incredible story of cinematographic derring-do, laced with tragedy – the deaths of mountaineers George Mallory and Sandy Irvine on the expedition Noel was capturing if anything enhanced the film’s mystique on its release, and even today, when very little lies beyond the reach of the all-pervasive camera, the film retains its awe-inspiring potency.

Continuing the theme of silent classics, our latest Deep Focus feature explores the glittering swansong of silent cinema, generally regarded as being the years 1926-1931, as the talkies gradually cemented their hegemony in the wake of The Jazz Singer’s release in 1927. Ian Christie is our expert guide to this astonishingly fertile terrain, addressing two important questions: was there a special language of silents, and what in particular was lost in the transition to the talkies?Christie selects 15 key films of the period to explore in greater depth the art of creating purely “visual storytelling… a unique visual music” – Sunrise, 7th Heaven, The Wind, The Crowd, Pandora’s Box, amongst others. It’s safe to say that many of you will be reaching for those old favourites on DVD after reading this.

“The key to Clio Barnard’s work is a radical pursuit of truth, by whatever means necessary.” That bold declaration was amply borne out by the formal innovations of Barnard’s debut feature The Arbor, and consolidated by her second, the Cannes prize-winner The Selfish Giant. Set amongst an underclass on Bradford’s edgelands, Barnard’s tale of teenage friendship and against-the-odds entrepreneurialism is couched in shades of elegiac Loachian naturalism. Barnard discusses authenticity, the instability of truth and the Alexa camera with Kate Muir.

Filipino Lav Diaz is one of the greatest living directors yet barely known in the UK, partly owing to most of his films’ extended running times. His latest, the outstanding Norte, End of History, a hit at this years’ Cannes, weighs in at a mere four hours and can be seen at this year’s London Film Festival.

Aaron Cutler sets the new film in the context of Diaz’s whole oeuvre, in which “the posing of unresolved contradictions as part of an ongoing moral struggle is integral.” Profoundly engaged with his country’s history and politics, and the aesthetics and politics of cinema, Diaz turns to colour in El Norte instead of his typical black-and-white and goes after big quarry – no less than the birth of fascism in the Philippines, in the guise of a character not so far removed from a young Ferdinand Marcos.

Also in this month: Hannah McGill on the significance of balloons in cinema, Kim Newman on Ikarie XB 1 – the magnificent 60s Czech sci-fi film that exerted a huge influence on Kubrick’s 2001 A Space Odyssey – Eduard Artemiev’s haunting music for several Tarkovsky masterpieces, and a career overview of Turner Prize-winner Elisabeth Price.

Shapeshifting, all-devouring, steeped in blood – the gothic tradition has grown into a monster of terrifying size and limitless appetites, swallowing other genres and lurking in every corner of our culture. Now, a major BFI season brings it back into the limelight. By Rhidian Davis.

PLUS The Poe perplex

Between 1960 and 1964, a cycle of films based on Edgar Allan Poe’s Tales of Mystery and Imagination revived the gothic tradition and reinvented modern horror.  By Roger Corman.

The instability of truth

Building on the success of her documentary hybrid The Arbor, Clio Barnard’s first venture into fiction, The Selfish Giant, explores life around scrap metal yards. Here she talks about the joys of working with children (and horses), making the move from artist’s films to features, and growing up looking like Mick Jagger. By Kate Muir.

Filmed on the 1924 climbing expedition that cost George Mallory and Sandy Irvine their lives, The Epic of Everest was more than a record of a heroic failure: it broke new ground and set new standards for documentary making – and had political effects that are still being felt. By Wade Davis.

Lav Diaz’s determination to explore the darkest aspect of his homeland’s past, and to give his stories as long as they need, is almost legendary. In Norte, the End of History, he gazes at Ferdinand Marcos’s legacy in the Philippines through a Dostoevskian lens. By Aaron Cutler.

After decades of neglect and condescension, contemporary filmmakers, critics and audiences are learning to appreciate the marvels of silent film, and how much more it was than talkies minus the words. During the highpoint of the silent era, between 1926 and 1930, the form reached a zenith of poetic expression and subtlety before the coming of sound swept it all away. Here we present a personal selection of 15 key films from that period. By Ian Christie.

In the frame: Keeping it surreal

An exhibition exploring the versatile artistry of Jan Svankmajer reveals the full breadth of his sensual, often grotesque creations. By Michael Brooke.

Balloons are potent emblems of childhood innocence and joy – and of just how quickly they can vanish. By Hannah McGill.

On the eve of the re-release of Gone with the Wind, we wade into battle with our pick of the major films about the conflict. By Michael Atkinson.

First sight: Scenes from a marriage

Fast and slow, sad and happy, always widescreen: after 40 years, Telluride still delivers an electrifying jolt all of its own. By Mark Cousins.

Development tale: Daisy pulls it off

The producers of How I Live Now had to wait years for the right director to be free – and the right actor to grow up.

The numbers: The Great Beauty

A sustainable UK film industry requires us to support voices of note rather than simply strive to make British cinema more mainstream. By Ben Roberts.

More and more artists are moving from gallery to cinema, but the transition can be painful. SoFA aims to cushion the blow. By Kieron Corless.

Venice: Bringing it all back home

Diary: A case for Zen

After years of going to festivals as a critic, it comes as a shock to find yourself being one of the attractions. By Gabe Klinger.

Preview: Coming up for air

Lynch, Bolaño, Dostoevsky, Rohmer and Corman are just a few of the eclectic influences of low-budget opportunist existentialist Gary Walkow. By Iain Sinclair.

Neither neoclassical nor socialist-realist, Eduard Artemiev’s scores for Tarkovsky seem to emerge from the natural worlds of the films. By Daniel Barrow.

Mobile apps for sharing ultra-short movies hark back to the experimental eclecticism of Victorian filmmaking. By Bryony Dixon.

Elizabeth Price’s Turner Prize-winning videos deploy a variety of languages in an attempt to explore hidden histories and memories. By Melissa Gronlund.

The Blueblack Hussar
Camp 14: Total Control Zone
Closed Circuit
Cold Comes the Night
The Crash Reel
Cutie and the Boxer
Diana
Drinking Buddies
Enough Said
The Fifth Estate
Folie à deux: Madness Made of Two
Last Passenger
The Lebanese Rocket Society
Like Father, like Son
Love, Marilyn
Machete Kills
Mademoiselle C
Morrissey 25: Live
Muscle Shoals
NFA
9.79*
The Nun/La Religieuse
One Direction: This Is Us
On Landguard Point
Prince Avalanche
Prisoners
Project Wild Thing
Riddick
The Selfish Giant
Short Term 12
The Taste of Money
Turbo
We Are What We Are
Le Week-end
Which Way Is the Front Line from Here? The Life and Time of Tim Hetherington

Soviet dominance in the early space race led to a brave cinematic vision of interplanetary exploration. By Kim Newman.

Some rare gems of early American cinema have been rescued thanks to collectors on the other side of the world. By Bryony Dixon.

Ben Walters browses a pair of books about the witty and irascible Orson Welles.

Brian Dillon feels a collection of Derek Jarman’s sketchbooks could have offered more.

Owen Hatherley enjoys a journey into space with Patrick Keiller.

Tom Charity is fascinated by a study of The Searchers.

A kaleidoscopic, Altmanesque, biblical epic – Paul Thomas Anderson then finishes it on a note of quiet affection. By Philip Concannon.