In our Made in Britain special, Jonathan Glazer talks Scarlet Johansson in Scotland, alien cinema and Under the Skin, plus David Mackenzie on Starred Up, Richard Ayoade on The Double, Mark Cousins on A Story of Children and Film, and super-producer Jeremy Thomas on an epic career in cinema. In print and digital from 7 March. 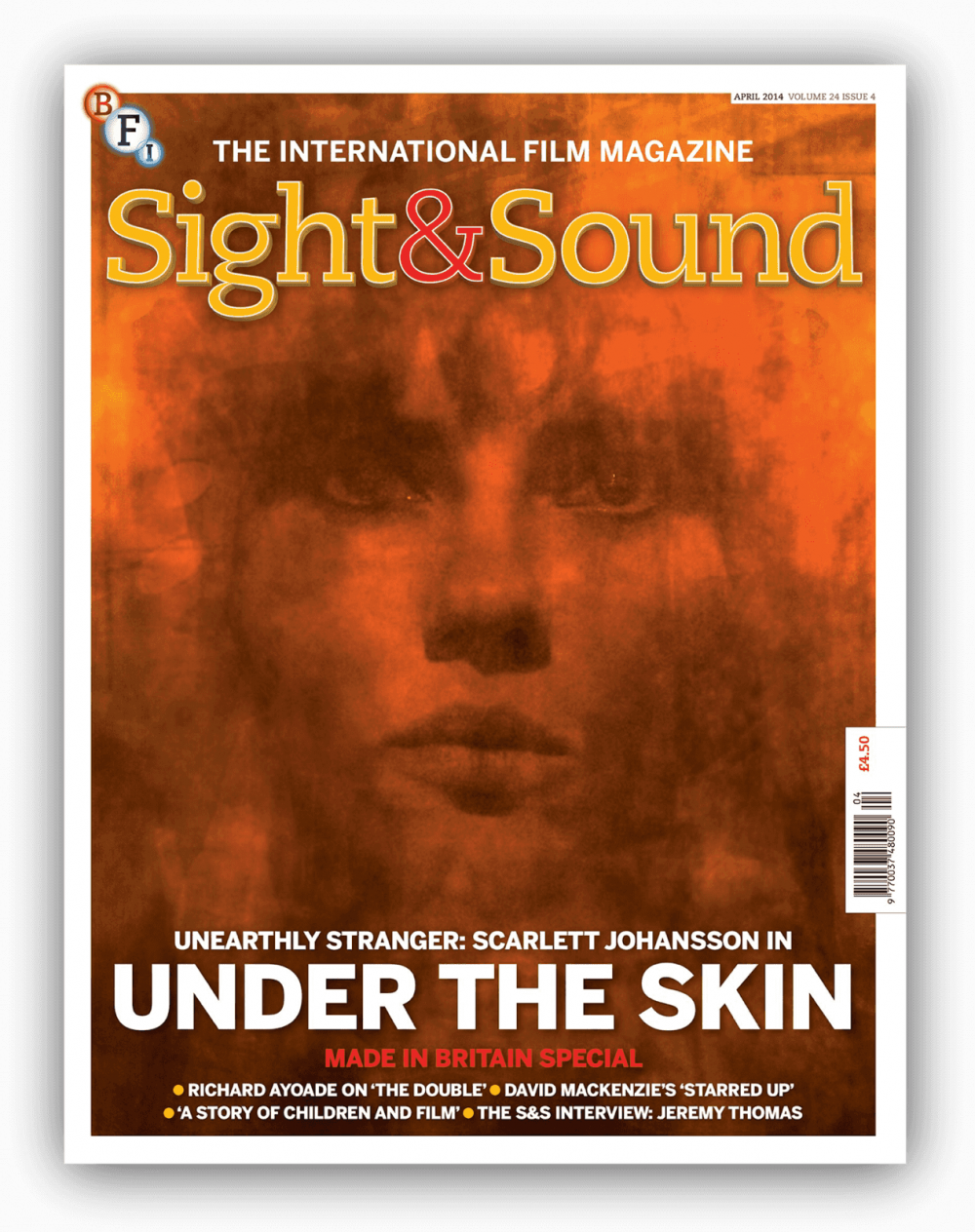 The cover of our April issue, with Scarlet Johansson’s face obscured by an orange miasma, has already been compared to the image on the Rolling Stones album Goat’s Head Soup and, yet more obscurely, to the Turin Shroud. What this cover proclaims, however, is not only the fatal attraction Johansson puts to such good use in Jonathan Glazer’s Under the Skin as a creature from another world designed to attract human males, but also a ‘Made In Britain’ special. Here features on David Mackenzie’s gripping prison drama Starred Up, Richard Ayoade’s beguiling present-day adaptation of Dostoevsky The Double, Mark Cousins’ eye-opening film history survey A Story of Children and Film and the first part of our mammoth profile of UK super-producer Jeremy Thomas have been happily gathered together.

We’re not out to make any great statements about British cinema; we just want to underline exactly what Under the Skin best represents – that right now UK cinema is an arena of quality and experiment. “What would a truly alien cinema be like,” Jonathan Romney asks in his Under the Skin article? Glazer’s film itself answers the question, the director having stripped Michel Faber’s source novel “to its starkest essence” while reimagining alien processes of farming in a visionary way that have to be seen.

As Trevor Johnson notes, Jack O’Connell, the actor at the heart of Starred Up, is terrifyingly convincing as the vicious, unlikable yet compelling youngster who respects no one. Quizzed by Johnston, in our absorbing interview, as to why he made this emotionally authentic film, Mackenzie says, “There is a rebel in me that’s attracted to the sort of people who think that the rules don’t apply to them.”

David Thompson describes Richard Ayoade as “a talent completely at ease with the modern language of cinema.” Ayoade was drawn to make The Double by its premise that “an exact replica of you would appear and no one would notice.” He gave his lead actor Jesse Eisenberg Orson Welles’s The Trial and Bresson’s A Man Escaped to watch in preparation for his doppelgänger switcheroo role. Clearly Ayoade is a Sight & Sound kind of guy.

Our Jeremy Thomas special interview gives a delightful portrait of Thomas growing up on the sets of Pinewood, watching his father Ralph make the Doctor films and his uncle Gerald the Carry On films, and graduating himself through the cutting rooms of Ray Harryhausen and Ken Loach to taking on his first production, Mad Dog Morgan, with a half-mad Dennis Hopper in Australia.

We talk to our very own Mark Cousins about his new meditation on cinema history A Story of Children and Film, while Pasquale Iannone looks back over the history of child protagonists in the best of cinema.

And that’s not to mention our report from Berlin with its previews of the Nick Cave documentary 20,000 Days on Earth and a new Tsai Ming-liang film, Journey to the West, amongst many others.

Jonathan Glazer’s extraordinary adaptation of Michel Faber’s novel Under the Skin is a collision between the surreal and the very real, as an extraterrestrial Scarlett Johansson tours the Scottish countryside in search of prey. By Jonathan Romney.

David Mackenzie’s savage prison drama Starred Up, which tells the story of a violent young offender who is transferred to the same prison wing as his estranged father, represents a high point in the versatile career of one of Britain’s most undervalued directors. By Trevor Johnston.

Cinema’s fascination with childhood is as old as the medium itself, enabling filmmakers to depart from conventional modes of storytelling as they exploit an adult awareness to reflect the undoubted otherness of youthful experience. By Pasquale Iannone.

Plus: Songs of freedom

Mark Cousins seized the chance to take liberties with form in his essay film A Story of Children and Film,  an examination of the notion that kids’ movies are all about freedom.  Interview by Pasquale Iannone.

Me, myself and him

A man is haunted by his doppelganger in Richard Ayoade’s Submarine follow-up, The Double, which sees the director expand his filmic vocabulary in a black comedy of anxiety and urban paranoia, loosely adapted from Dostoevsky’s novella. By David Thompson.

The S&S Interview: Jeremy Thomas, part one: The making of a super-producer

In a career spanning more than 40 years, Jeremy Thomas has been the engine behind an extraordinarily diverse range of films, from Skolimowski’s The Shout to Bertolucci’s The Last Emperor to Jarmusch’s Only Lovers Left Alive. The son of Doctor in the House director Ralph Thomas and the nephew of Gerald Thomas, the man behind the Carry On… films, Jeremy grew up at the heart of the British film scene of the 1950s and 60s, cutting his teeth on work with Ken Loach and Ray Harryhausen.

Here, he reminisces about his childhood hanging out with Sid James, making films at Dirk Bogarde’s house and going ten-pin bowling with John Hurt. Interview by Nick James.

In the frame: Flare path

In recognition of the increasing complexity of sexual politics, the renamed BFI Flare: London LGBT Film Festival aims for inclusivity. By Ben Walters.

Whether out of political expediency or for satirical effect, filmmakers have always enjoyed overseeing the birth of a nation. By Isabel Stevens.

Suzanne, Katell Quillévéré’s follow-up to Love Like Poison, is a complex family drama that confirms her as a singular talent to watch. By Jonathan Romney.

A story of Talebi and film

My evolving relationship with the work of the great Iranian director Mohammad-Ali Talebi is about to take an exciting turn. By Mark Cousins.

From viral webisodes to the big screen, Jonny Owen’s music management comedy has been on a complicated journey, reports Charles Gant.

Gay life has been transformed in the last 20 years, but gay cinema still faces the problem of how to be both audacious and mainstream. By Ben Roberts.

Berlin: No alarms, no surprises

After a couple of unusually strong years at the festival, it’s back to business as usual, with a glut of mediocre fare and only a handful of truly standout films, reports Nick James.

Of time and the city: Journey to the West

The Golden Bear: Murder by numbers

Discovery: Create your own truth

Cinéma-vérité pioneers and ambivalent observers of separatism, Michel Brault and Pierre Perrault might be Quebec’s best-kept secrets. By Jason Anderson.

Bill Morrison, expert aesthetician of decay and disappearance, turns his attention to the forgotten flood that devastated interwar America with The Great Flood, writes Sukhdev Sandhu.

Soundings: How to write a film on a piano

By physically carving soundtracks onto celluloid, Norman McLaren – who would have turned 100 this April – anticipated digital music. By Crystal Chan.

Filmmakers and indigenous people were collaborating on hybrid features years before Nanook of the North. By Pamela Hutchinson.

Artists’ moving image: Satisfy the need in me

The Past
The Robber
Salvo
The Unknown Known: The Rules and Memos of Donald Rumsfeld

About Last Night
Back to Front: Peter Gabriel Live
Back to the Garden
BAFTA Shorts 2014
Betsy & Leonard
Bette Bourne It: Goes with the Shoes
The Borderlands
The Double
8 Minutes Idle
Endless Love
The Fold
G.B.F.
Half of a Yellow Sun
Highway
Honour
I Declare War
The Legend of Hercules
The Lego Movie
A Long Way Down
The Machine
The Monuments Men
Mr. Peabody and Sherman
My Stuff/Tavarataivas
Need for Speed
Paranoia
Plot for Peace
RoboCop
The Rocket
The Stag
Starred Up
A Story of Children and Film
Suzanne
Svengali
Tinker Bell and the Pirate Fairy
Tom at the Farm
Under the Skin
Unforgiven
Visitors
Winter’s Tale
The Zero Theorem

Shot on the tougher fringes  of Chicago and drawn from  the city’s real-life criminal lore,  Thief is steeped in authenticity. By Nick Pinkerton.

Appointment with death: The Killers

Don Siegel’s remake of the 1946 classic, far from playing it safe, became an inspiration for directors from Boorman to Tarantino.

The Big Melt
Classe tous risques
King of the Hill
Lubitsch in Berlin: Six Films by Ernst Lubitsch, 1918-1921
Films by Radley Metzger
Mouchette
Play It Cool
The Poirot Collection
The Agatha Christie Collection
Transport from Paradise
The Umbrellas of Cherbourg: 50th Anniversary Edition
Who Is Harry Kellerman and Why Is He Saying Those Terrible Things About Me?

Paul Wendkos’s doomed-heist thriller  proves a powerful piece of noir filmmaking. It’s a crime that it’s been ignored for so long. By Robert Hanks.

Henry K. Miller dips into a study on modern visual culture and genocide.

Steve McQueen’s intolerable cruelty, in praise of Robert Mulligan, a deeper anatomy of Her, the postscript to Horace Ové’s Pressure and Blue is the Warmest Colour’s Pasta Scene Delete option.

The circularity in Martin Scorsese’s comedy leaves its protagonist trapped after breaking free, and its director ready for a new beginning. By Danny Leigh.